The History of Cats in Human Civilization

Throughout history, a select few animals have managed to enter our hearts, including cats. Let's look at the history of cats in human civilization. 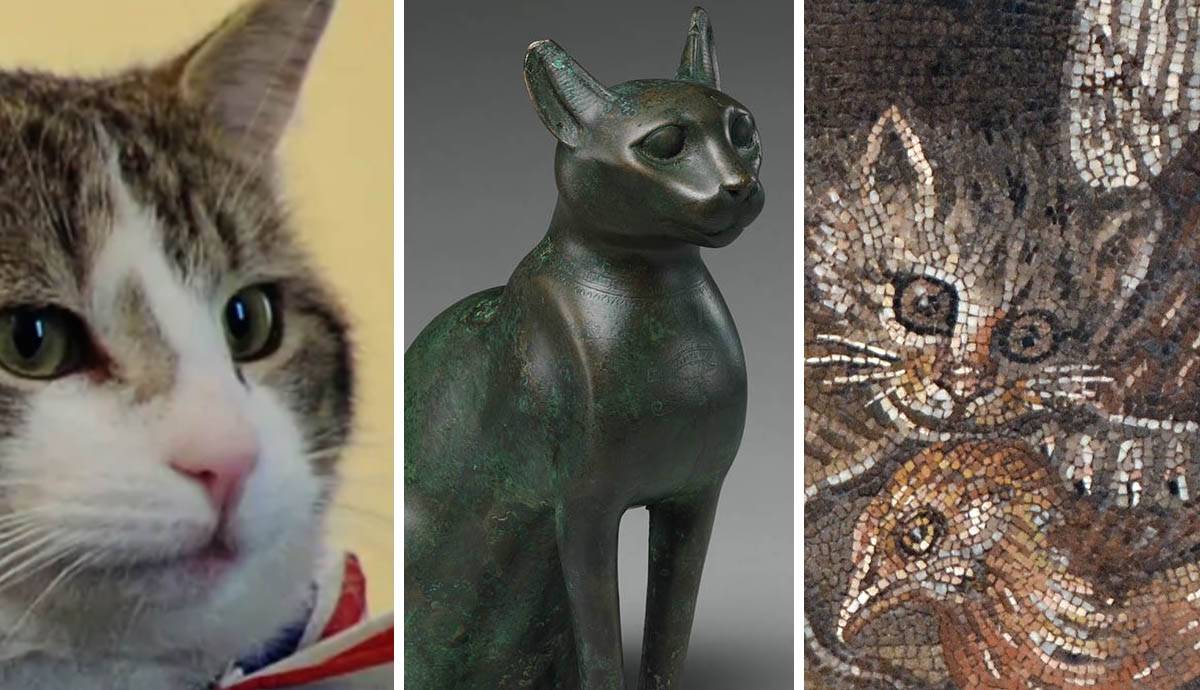 As humans, we have sought to domesticate animals for various reasons. A select few of these animal species managed to win our affection and transcend the duties given to them and enter our hearts and homes as beloved pets. There is no consensus of exactly when or where cats became domesticated. It is theorized that they became domesticated at approximately the same period within several places of the Middle East, all descending from the common ancestor, the African Wildcat. Let’s take a closer look at the history of cats, and the role they played in human civilization.

Until recently, Egypt was thought to be the place where cats originated, but archeological discoveries have shed more light on the domestication of cats. The oldest known evidence comes from Cyprus in the form of a grave where a human and a cat were buried together 9500 years ago. Since cats are not native to Cyprus, the human population must have brought them to the island when they migrated there. The burial site is part of the neolithic Shillourokambos site, and predates Egyptian depictions of cats by about 4000 years.

In Chinese civilization, evidence points to cats being domesticated at around 3500 BC, although as many as four ancestral wild cats have been identified. All cats in modern China, however, descend from the African Wildcat, suggesting that it is possible that this subspecies replaced the breeds of domesticated cats in China as a result of the opening of the Silk road trade route, and contact with civilizations in the Middle East, as well as with Rome.

Looking at the history of cats, it is extremely hard to pinpoint exactly when in they became domesticated, but evidence points to them being “commensal domesticates.” Like rats, mice, sparrows, and other animals that live in urbanized areas, it is likely that cats were drawn to human settlements, probably as a result of the other animals there. Their relationship with human society started out as a convenient symbiosis where humans attracted vermin of which they needed to rid themselves, and which happened to be what cats ate. It took little for humans to realize that their new neighbors would prove to be very useful in keeping pests from eating stored grain. Hence, the history of cats became tied to human society and the growth of civilization.

A History of Cats In Ancient Egypt

Contrary to popular belief, cats were not worshipped in Egypt; however, they were highly revered. For more than 3000 years, cats represented an integral part in Egyptian social and religious practices, being represented in art and as animals which deserved immense respect. They were regarded as representing fertility, justice, and power, and were synonymous with several deities, chief among them being Bastet, who was depicted with the head of a cat. Originally, the goddess was depicted with the head of a fierce lion, but as Egyptian society evolved, so did their deities, and Bastet was later depicted as having the head of a domestic cat.

As such, cats were afforded high status in Egyptian society.

The history of cats in Egypt represented a significant portion of the economy. There were special cat cemeteries where cats were mummified and interred. Vast sums of money were required for the extensive breeding of cats as well as resins and embalming fluid required for mummification. They were depicted in artwork and on the walls of tombs where they were shown accompanying the departed in the afterlife.

In ancient Egyptian civilization, cats were popular across all class spectrums. Pharaohs would often have large cats as pets, and have gold jewelry made for them. The poorer classes obviously couldn’t afford this, but jewelry with cat designs was very popular.

The History of Cats In Ancient Greece & Rome

It is widely believed that cats were introduced into classical era Greece and Rome by about the 5th century BC by the Phoenician traders who sailed the Mediterranean. The earliest depiction of cats in Greek civilization comes from two coins from around the mid-5th century BC which show prominent figures from Greek colonies on the Italian peninsula playing with their pet cats.

As with all cultures, the Romans and Greeks found cats useful in controlling vermin populations, but they were not the first animal of choice. That honor went to weasels and ferrets. However, this state of affairs changed, and cats were recognized for their superior abilities in catching mice, as well as their enthusiasm in doing so.

Their use in protecting food stores was only the beginning. Roman legions kept cats in forts, not only to protect the food stores but also because rats liked to chew on leather, thus damaging armor and equipment. Cats therefore proved useful accompaniments to Roman soldiers both at home and in the field. Soldiers often saw cats as mascots and companions.

In Roman mythology, cats were representative of freedom, and were depicted accompanying the goddess Libertas. They were also privileged with being the only animals allowed inside religious temples.

The History of Cats In the Middle Ages

During the Middle Ages in Europe, cats continued their duties as mousers but did not enjoy the respect they had received in earlier eras. Religious dogma intervened, and cats were often portrayed as instruments of the devil, and were thought of as animals that accompanied witches and heretics. This belief is perfectly illustrated by Walter Map in 1180 who wrote, “the Devil descends as a black cat before his devotees. The worshippers put out the light and draw near to the place where they saw their master. They feel after him and when they have found him they kiss him under the tail.”

This hatred was taken up by the Church, who often accused heretical groups such as the Cathars as associating with and even worshipping cats. In 1484, even the pope declared that cats were the favorite animal of the devil and idols to witches. Nuns and monks, however, often ignored the Pope’s beliefs in this regard. Cats were the only animals allowed in monasteries for the essential service they provided. As such, monks and nuns often grew fond of their feline cohabitants. Depictions of cats are often found in illuminated manuscripts from this time.

In Scandinavia, the Norse had a good relationship with cats, especially since they lived in longhouses with all their other domesticated animals. Vikings kept cats on their boats while traversing the high seas and waterways of Europe, not just to keep the pests at bay, but to bring luck. The Norse goddess Freya was often depicted as riding a chariot pulled by two large cats named Bygul and Trjegul.

In the Middle East, cats were thought of very differently from their counterparts in Europe. The Muslim world had great respect for cats, and it is said that the Prophet Mohammed liked cats and treated them well. Some cities even had charities that looked after street cats. This trend continues today, especially in places such as Turkey, where cats can be seen everywhere in Istanbul and are well-loved and cared for.

The History of Cats In Pre-Victorian England

Although many people kept pets, owning a pet was seen as ostentatious and frivolous. Dogs and cats were expected to be working animals, earning their keep through duties rather than being beloved family members.

However, in the late 18th and early 19th centuries, attitudes began to change. Owning a pet started to be seen as an exercise that added value to the family. Having a pet was also seen as helpful in teaching children about responsibility. Dogs went through a quick transition from workers to important members of the family who added their special love to the family unit. They were seen as embodying the values of the English – loyal, plucky, steadfast, and brave. Cats, however, were still much maligned and were seen as being insidious; their association with witches persisted. Thus, their position in society remained relegated to their duties as mousers. It wasn’t until the late 19th century that the history of cats started to change.

The first person to organize a cat show in England was a man named Harrison Weir, an animal enthusiast who kept pigeons, dogs, rabbits, and poultry as pets. He was an avid cat fan who claimed they were “possibly the most perfect, and certainly the most domestic.” He didn’t always have this opinion, though. Weir admitted that he originally did not have any particular love for cats, but once experiencing their merits as pets, he became one of their biggest fans, claiming they were “an object of increasing interest, admiration, and cultured beauty.”

The first cat show in 1871 was one of many. Subsequent shows were held, and cat appreciation clubs began to spring up. To his eventual dismay, his efforts aimed the appreciation of cats only at the upper classes, and cats became associated with extreme snobbery.

Harrison Weir wasn’t the only person turning the perception of cats around. The artist, Louis Wain, around the same time, began producing artwork of comical cats, often engaged in very human activities. These pictures found their way into a broad spectrum of publications, reaching people from across the social strata of England at the time, and a number of annuals were published which became very popular as Christmas gifts. In 2021, a movie about his life, “The Electrical Life of Louis Wain” was released, starring Benedict Cumberbatch as the eponymous character.

In many parts of the world outside of Asia, Europe, and some parts of North Africa, domestic cats were not kept as pets until the late 19th century. They found their way to colonies around the world along with their human “employers” and only received recognition as animals worthy of being companions at much the same time as in the UK and the rest of Europe. Their rise in popularity since then, however, has been meteoric.

Today, cats enjoy a prominent position as the world’s second most popular pet, after dogs. Although it is difficult to determine, the population of the domestic cat is estimated to be over 400 million worldwide (which includes ferals and strays), with a hefty 76 million living in the United States.

While their role has changed rapidly, some prominent cats remain honorary mousers. The British government offices are old and built in an area where there has always been problems with rodent infestations. Since the early 16th century, a cat has been employed by the government to deal with the problem. Today, the current holder of the title of Chief Mouser to the Cabinet Office is “Larry,” who has held the position since 2011, and has served through the administrations of three Prime Ministers.

As the human population grows, so does the cat population, and with the cat’s current level of prestige, it is safe to say that the future of our feline friends is secure and filled with much love.