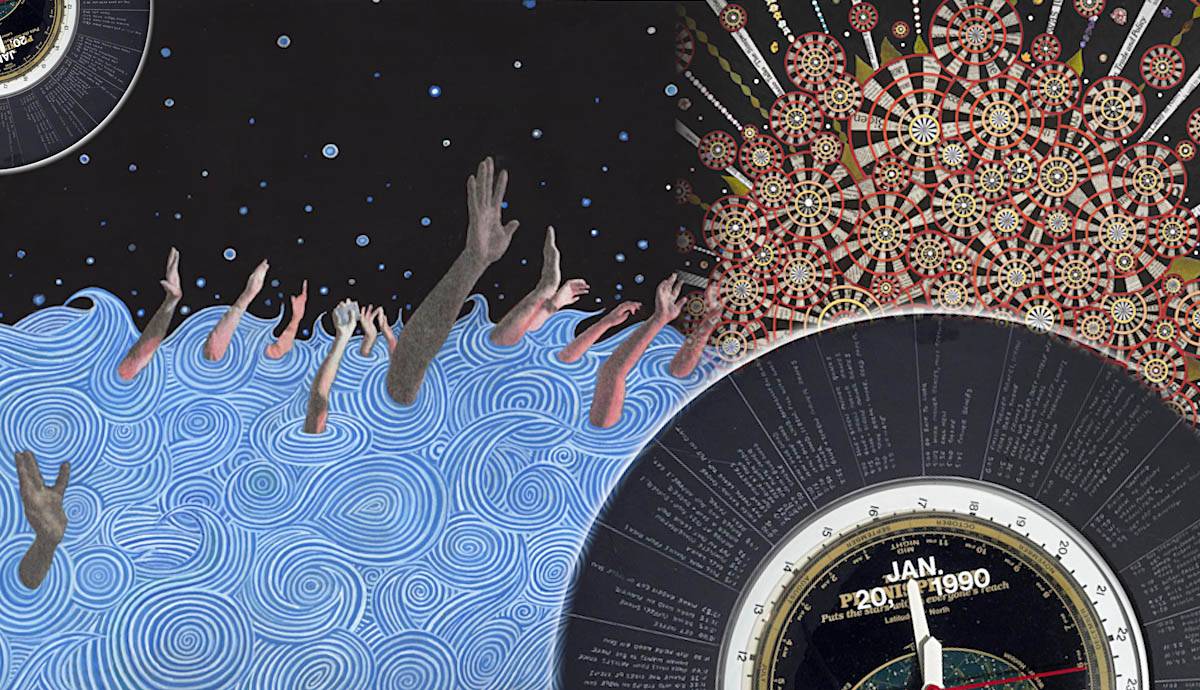 As a young artist, Fred Tomaselli immersed himself in Los Angeles’ beat generation and psychedelia, and his art still attests to that today. It is the opposite of the Minimalist environment of his peers: Tomaselli’s art celebrates life to the fullest, in all its shapes and colors.

Fred Tomaselli was born in 1956 in Santa Monica, California. From his upbringing, he got to know two different sides of Los Angeles: on the one hand, the artificial pleasures of Hollywood and Disneyworld; and on the other, the striking landscape of mountains and sea. Tomaselli studied at California State University and was a keen surfer in his free time.

The combination of the artificial and the natural has remained a present theme throughout Tomaselli’s oeuvre. His complex compositions refer to the forms found in our cosmos, often exploding and reaching outwards as if representing the very start of our universe. However, the materials he uses are artificial chemicals such as plastic and resin, and his explosive shapes could equally represent the fireworks spectacle that ends the day at Disneyworld.

When Tomaselli graduated from college, the center of the art world was in New York, and the dominant art movement was Minimalism. Tomaselli, however, found this type of art too straight and academic. Instead, he worked in a surf shop while immersing himself in the Beat culture of Los Angeles. The founding figures of the Beat generation, among which are William S. Burroughs, Allen Ginsberg, and Jack Kerouac, were driven by their respective impulses, rejecting conventional lifestyle choices in favor of experimentation. Thanks to the adventurous lives they led, the members of the Beat generation changed the visual arts and music, and literature for future generations.

The Beat artists in Los Angeles also experimented widely with drugs, primarily psychedelics. The hallucinatory properties of drugs like LSD corresponded with their lifestyle of adventure and rebellion. But Tomaselli emphasizes that his works are not about drugs but about perception: ways of seeing a parallel reality. “I want people to take a trip in my work,” he told the New York Times in 2013.

In line with the radical origins of Beat culture, Fred Tomaselli abandoned painting and started to create performative installations using low-cost, everyday materials. In Current Theory, he used Styrofoam cups placed in a grid-like formation on a sea-blue surface and connected by thread. He also used three electric fans. When the fans started blowing, the cups would lift and float and twirl around as if in a dance. Already in his early work existed the simultaneous occupation with the fantastical and the mechanic, a concept which would also appear throughout his later work.

Back To Two Dimensions

In 1985, Fred Tomaselli moved to Brooklyn, where he still lives today. Soon after, he started to embrace painting again but not in a very strict sense. Besides using paint, he worked with objects and three-dimensional materials as part of his wall-based works, which were then coated in resin.

In Diary, an actual clock serves as the canvas, on which Tomaselli has added wood, Prismacolor, and enamel. The clock-face renders different time zones. The surrounding circle functions like a blackboard on which Tomaselli has written exactly what he did at different hours of one day: January 20, 1990. There is an interplay between global time and personal time: a contrast between the mundane and the universal, the intimate and the grand.

Tomaselli’s novel artistic materials included the natural – hemp leaves and flowers, for instance – as well as the manufactured. Fred Tomaselli started to use pills as materials in both abstract and figurative works as a nod to his experience with psychedelics.

In Untitled, Expulsion, what appears to be a giant sun is emitting rays from the top left corner of the canvas. The sunrays are made up of hundreds of tiny found images, carefully separated from their original contexts and integrated into intricate compositions. There are tiny insects that resemble butterflies, as well as flowers and leaves. These items from nature are mixed with small white pills, a nod to Tomaselli’s psychedelic past. We can make out two humans walking away in the bottom right corner, their postures suggesting agony.

The title of the work refers to the expulsion of Adam and Eve from Eden. Even though Tomaselli is a self-proclaimed atheist, religious iconography often appears in his work. But here, the higher powers in the sky are cleverly combined with the small minutiae of life on earth.

As references to the beauty of the natural world, human figures began to appear in Tomaselli’s works as well. In Expecting to Fly, a man appears to be falling from the sky, his facial expression and position of his arms suggesting fear. But below, we see a multitude of hands reaching up as if to catch him. The man’s body itself comprises tiny images of leaves, flowers, insects, and even a snake. All is held together by thick layers of high-gloss resin; a material Tomaselli often used on his surfboards.

Fred Tomaselli’s figures are reminiscent of the Italian 16th-century painter Giuseppe Arcimboldo, whose figures were often made up of plants and fruits as well as of anatomical magazines and encyclopedias of flora and fauna. As is usual in Tomaselli’s imagery, the fantastic world and the real world blend together seamlessly. His works are trippy landscapes with dazzling detail, the psychedelic drugs depicted together with the hallucinatory images that they can evoke.

The Power Of Patterns

Fred Tomaselli’s mixed-media works become more polished and defined as he progressed in his career, but his occupation with symmetrical patterns remains a constant. Writer Siri Hustvedt writes in an interview with the artist that looking at his artworks raises questions of perception itself: how do we see what we see? Making patterns is what humans have been doing since their first existence. Tomaselli agrees. “When I see the different indigenous art found throughout the world, I can’t help but notice their commonalities. I also can’t help being seduced by them. It’s almost as if these archaic patterns are encoded in our DNA.”

There are also hints of Surrealism in his juxtapositions of human elements and geometric forms. It is as if we can literally see the woman in Summer Swell dreaming of another world.

Fred Tomaselli first started working with newspaper material in 2005, using the front page of the New York Times as the canvas for his works. He highlighted the news of the day with layered collages and paintings in his series titled The Times, each work titled according to the date on which the original newspaper was published. The events were usually tragic: hurricanes, political turmoil, illness, and death. Tomaselli views these artistic interventions as abstract editorials, just another decision made in the production of the news.

By inserting his colorful, psychedelic, and otherworldly compositions into the devastation and death reported by the newspaper, Tomaselli turns these events into something beautiful and otherworldly. He makes it easier to digest political events and natural disasters. What was a grim and somber item of news, printed in a monochrome text, becomes a colorful image with exuberant and even transcendental qualities.

“The weird thing about when I removed the actual pills and the psychoactive drugs from my work is that the work actually got trippier. When I got rid of the kind of pharmaceutical chemicals, I guess I made up for it by using the buzz of media,” recounted Fred Tomaselli in a video for James Cohan Gallery.

When the pandemic hit in 2020, Tomaselli was forced to work from home in his studio in Brooklyn. The newspaper collages took on a renewed meaning. It was a material that was easy to come by and use on a smaller scale. But the news itself also changed and became universal: reports of Covid-19 around the world dominated.

Monday, March 16, 2020 was the first New York Times collage that Tomaselli made while in quarantine during that fateful month. “This woman is walking into the unknown. I wanted to make her really stark and make her really isolated, but I also wanted to talk about hope,” described Fred Tomaselli to James Cohan Gallery.

In June 1, 2020, we can tell that the situation is still dire. Tomaselli gives us an image of arms in different skin colors submerging from turbulent waters, reaching up to the sky. “Black Voters to Democrats: Normal won’t Do” and “Trump Offers No Calming Words As Tumult Reaches White House” are the newspaper texts that are still visible underneath the painted image. It could reference both the pandemic and the Black Lives Matter protests, but Tomaselli leaves the exact interpretation to our own imagination.

It All Comes Together: Cosmic Shapes, Newspaper Text, And Psychedelics

In 2020, Fred Tomaselli started to combine his newspaper collages with his large resin paintings. He turned the process of the New York Times collages around, taking parts of text out of the newspaper and using it as source material for his monumental paintings. The text from the newspaper thus becomes abstract, a visual tool in a larger composition.

These large-scale mixed-media works look as if they belong out in our universe: rhythmic, cosmic forms, depictions of stars and heavens. Spinning mandalas with layers of paint and newspaper text are set against a photographic backdrop of a forest and a nighttime sky. The forms are sure to remind the viewer of constellations.

Some of Fred Tomaselli’s works contain the shapes of birds. Tomaselli’s brother is an avid birder, and he went on camping trips with him to look at birds. In his latest bird painting, Untitled 2020, the bird appears dead on the grass, and a swirl of typical Tomaselli shapes emanate from its body. The bird in Untitled, 2020 is made up mostly of plastic objects, cut and glued together into the bird’s body, as well as composed of images found on the internet. The cheap plastic gives and the internet “detritus” gives the dead bird an ambiguous character – a hidden comment on how plastic destroys the environment.

Fred Tomaselli: A Psychedelic Look Into Our Universe

Fred Tomaselli uses everything available to him in terms of imagery and materials, taking inspiration from the colorful and fascinating world around him. There are spiritual influences – cosmic theory, tantric art, religious iconography. There are art-historical influences: folk art, Robert Rauschenberg’s collages, Joan Miro’s constellations. There are people and pills and psychedelic landscapes. But the presence of humans, animals, and plants, rendered in painstaking detail, roots his work fiercely in the material world. Fred Tomaselli’s work is dazzling, celebratory, and beautiful – as if the whole world has been on a psychedelic trip and landed safely on his canvas for all humans to behold.

By Sabine CasparieMA Modern & Contemporary Art, BA Art HistorySabine is an art historian born in the Netherlands and based in London. Originally a lawyer, Sabine then gained a Graduate Diploma in History of Art from The Courtauld Institute of Art and a Masters in Modern and Contemporary Art from Christie's Education. Sabine leads art tours in London and teaches classes on Zoom for adults and children. She writes a blog on contemporary art.

7 Famous Artists Who Experimented with Narcotics

18 Free Online Museum Tours To Enjoy Without Leaving Your Couch