The Female Gaze: Berthe Morisot’s 10 Most Notable Paintings of Women

French artist Berthe Morisot was an active member of the Impressionist movement who painted almost exclusively women. Here are 10 of her most notable works. 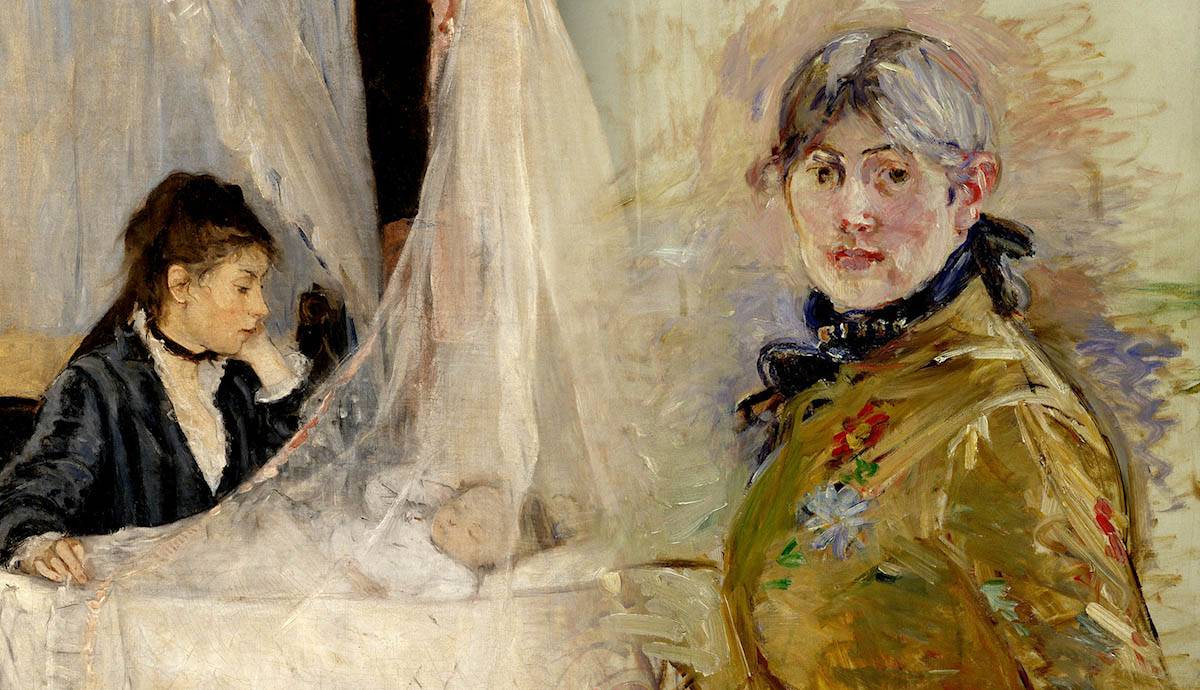 Important historian of film theory Laura Mulvey defined “the male gaze” in her seminal essay Visual Pleasure and Narrative Cinema, first published in 1975. Mulvey states that “the gender power asymmetry is a controlling force in cinema and constructed for the pleasure of the male viewer, which is deeply rooted in patriarchal ideologies and discourses.” This principle of women being portrayed for the benefit of male audiences was then adopted by feminist art historians who started propagating “the female gaze.” The female gaze shows women as seen by other women (and some men): not as sexualized or idealized objects but as interesting subjects. The power of the female gaze can be rightly seen in the works of Berthe Morisot.

In her paintings, Berthe Morisot portrayed women at all stages of their lives. As a woman herself, she had an intimate perspective of the daily lives of women in Paris. Morisot’s paintings show women as they are seen by other women, thus encapsulating the essence of the “female gaze.” This article reveals everything you need to know about Berthe Morisot’s paintings of women by looking at ten of her most important masterpieces.

Berthe Morisot was born in Paris in 1841 into an upper-middle-class family: her father was a former architect and a highly ranked civil servant, and her mother a distant relative of the Rococo painter Jean-Honoré Fragonard. Berthe and her sister Edma were encouraged in their love of art; their parents built a studio for them and introduced them to important painters. They also studied with the respected landscape painter Camille Corot.

One of Berthe Morisot’s earliest paintings shows Morisot’s mother and sister Edma in their opulent living room. Her mother is reading, and Edma looks at her with a loving gaze. The painting was done when Edma, awaiting the birth of her first child, stayed with the family in the winter of 1869-70. Because it was painted by a female family member, Mother and Sister of the Artist is seen through the artist’s gaze and therefore shows these women very much at ease. Neither woman returns the viewer’s gaze; instead, the viewer is allowed into their private world.

This painting of a mother and child was shown at the First Impressionist Exhibition of 1874. It appeared alongside the work of male contemporaries such as Paul Cezanne, Claude Monet, Pierre-Auguste Renoir, and Edgar Degas.

A woman sits on a chair, bent over a cot, in which a baby is sleeping. It is Morisot’s sister Edma with her young child. Both Edma and Berthe trained as artists, but Edma gave up painting when she became a mother.

The color white dominates the canvas, but through the white paint, other shades shine through. The mother is at the center with her auburn hair and her dark blue dress. She is looking at her baby with a mix of love and fatigue. Her gaze shows the pleasures as well as the difficulties of being a mother. Berthe Morisot, a mother herself of daughter Julie, would have known this well. However, she didn’t like to portray herself in the role of mother for fear of not being taken seriously as a professional artist.

Morisot not only captured women in their bourgeois homes, she also portrayed Parisian modern life in parks and gardens. Rather than looking at these women, the female gaze allows the viewer to see through their eyes and imagine what it’s like to be like them.

This painting was exhibited at the Fifth Impressionist Exhibition together with another painting by Morisot, Summer’s Day (now at the National Gallery, London). Morisot lived near the Bois de Boulogne where, during the 1850s, Napoleon III and the landscape architect Adolphe Alphand had transformed the Bois from a formal park into a “natural” woodland designed to appeal to the city’s inhabitants. The scene, combining bourgeois leisure with the manicured countryside, is typical for Impressionist paintings. However, because Berthe Morisot was above all else a portrait painter, she decided to focus on the two women and their relationship.

Berthe Morisot painted women all her life. Many of her paintings depict Morisot’s family or friends in the Passy area of Paris, where she lived from the 1850s to 1895. She often painted the figure known as the Parisienne: a chic, urban, sophisticated woman dressed in the latest fashion, who represents Paris modernity.

The color scheme in Woman with a Fan is dark, but there are some bright touches in the pink of the woman’s face and the yellow of her hair and the fan. The woman is dressed to go out, maybe to the theater. The American artist Mary Cassatt, who lived in Paris with the other Impressionists, also made several paintings of women inside the theater.

Berthe Morisot also painted women before they were going out, involved in the intimate act of the toilette. Being a woman herself, Morisot could access these very private moments within women’s homes and depicts them through the female gaze. The woman’s back is to the viewer, which allows us to become a part of her world rather than looking at her as an object of desire.

The color scheme is primarily white, but the white is mixed with various other colors as in The Cradle. The painting shows the looser style that has come to define Morisot. The brushstrokes are dynamic and spontaneous, and the work has an unfinished quality. Morisot believed that painting should endeavor to “capture something that passes,” and this brief glimpse into the woman’s bedroom does precisely that.

In Woman and Child on a Balcony, a woman and her daughter stand behind a railing, looking out over Paris. The mother’s black dress and her fashionable headpiece contrast with her daughter’s simple, white dress. This painting illustrates another important theme in Berthe Morisot’s paintings: the separation between public and private life. Morisot was fascinated by in-between spaces: verandas, balconies, and windows. It also enabled her to combine indoor and outdoor settings.

Women were often portrayed behind a balcony looking out over the city. At the time of Berthe Morisot, women were not supposed to wander the streets alone like Charles Baudelaire’s famous figure of the flâneur, observing city life. Instead, a woman’s world was primarily in the home and the garden.

More unusual were Berthe Morisot’s depictions of working women. Domestic servants have been portrayed in art before, but most of the domestic workers Morisot painted were women employed in her own household. These paintings showed Morisot’s status as a working professional woman who employed others to carry out domestic work – something very rare in her time. Because Morisot knew these women personally, her female gaze rendered them as individuals rather than merely as servants for someone else. In The Wet Nurse, Morisot shows her own daughter being cared for by another woman. The wet nurse’s labor in turn gave Morisot the time needed to create this painting.

Berthe Morisot was highly original not just in subject matter, but also in style. This painting also shows how Morisot took Impressionism further into a bolder, freer style. The brushstrokes creating the leaves in the background and the nurse’s dress are broad and have an unfinished look. The child is rendered through a few lines, and almost melts into the nurse, who in turn blends into her surroundings. This again shows Morisot’s female gaze, emphasizing the woman’s important role rather than highlighting her individual features.

Berthe Morisot also painted other working women, such as laundresses. Lower-class workers were not often deemed worthy enough to be the subjects of paintings. Here, however, women are seen hanging the laundry in the fields outside of Paris. The linen is aptly painted as splashes of white. This painting does not depict the women up close; it shows them amidst a landscape, highlighting the community aspect of hanging laundry.

The painting is a typical Impressionist image in its landscape setting as well as in the handling of paint. Contours are kept vague and daubs of light pastel color are used to indicate figures, objects, and nature. The pastoral setting depicted by Morisot is similar to the fields painted by her contemporaries like Claude Monet, with their weaving grass, quaint houses, and rolling hills.

In 1874, Berthe Morisot married Eugène Manet, the brother of her friend Édouard Manet. They had their daughter Julie in 1878, the only year that Morisot didn’t take part in the annual Impressionist Exhibition. Morisot painted Julie in all stages of her life, from her first months as a baby in The Wet Nurse to a confident, elegant young adult. She also portrayed Eugène with Julie, reading to her in the garden or playing with her. Such scenes of a father looking after his children were highly unusual but show a modern man who saw his wife’s talents and was very happy to prioritize his wife’s career.

In Young Girl With Doll, Julie sits on an upholstered fauteuil clinging to her doll. She is wearing a dark dress, and her black tights are rendered with strong black contours. Julie confidently returns our gaze, seemingly at ease with being a model for her mother. After Morisot’s death, Julie took care of her mother’s legacy until her own death in 1966.

This is the only self-portrait that Morisot painted, at the age of 44. Her hair is already greying, held back in a bun. The colors of the portrait are strong: red flowers on her light-brown blouse, a black scarf around her neck. Her torso is depicted in profile, but her head is turned to face the viewer, confidently returning our gaze. The brushwork is wild and full of movement, and the portrait has a sense of being unfinished.

Berthe Morisot died of pneumonia in 1895, aged fifty-four. Even with her incredible artistic production, her death certificate mentioned her as “unemployed,” and her gravestone states, “Berthe Morisot, widow of Eugène Manet.”

Thanks to the research and writing of feminist art historians, most prominently Professor Griselda Pollock, Morisot now has a firm place in history. In 2018 and 2019, the international touring exhibition “Berthe Morisot: Woman Impressionist” was shown at Musée National des Beaux-Arts du Québec, Canada, the Dallas Museum of Art, the Barnes Foundation, Philadelphia, and the Musée d’Orsay in Paris.

It appears that in the 21st century, Berthe Morisot has finally been given her due as one of the greatest painters of Impressionism and possibly one of the greatest painters in the history of art. She gives us a female perspective that had rarely been seen before in art: a female gaze full of understanding and compassion for her subjects. She is a painter of womanhood like no other.

By Sabine CasparieMA Modern & Contemporary Art, BA Art HistorySabine is an art historian born in the Netherlands and based in London. Originally a lawyer, Sabine then gained a Graduate Diploma in History of Art from The Courtauld Institute of Art and a Masters in Modern and Contemporary Art from Christie's Education. Sabine leads art tours in London and teaches classes on Zoom for adults and children. She writes a blog on contemporary art.

What You Should Know About Camille Corot