Jenny Saville is known for her large-scale and non-traditional depictions of naked female bodies. Her unusual portrayal of women makes her an important representative of feminist art. 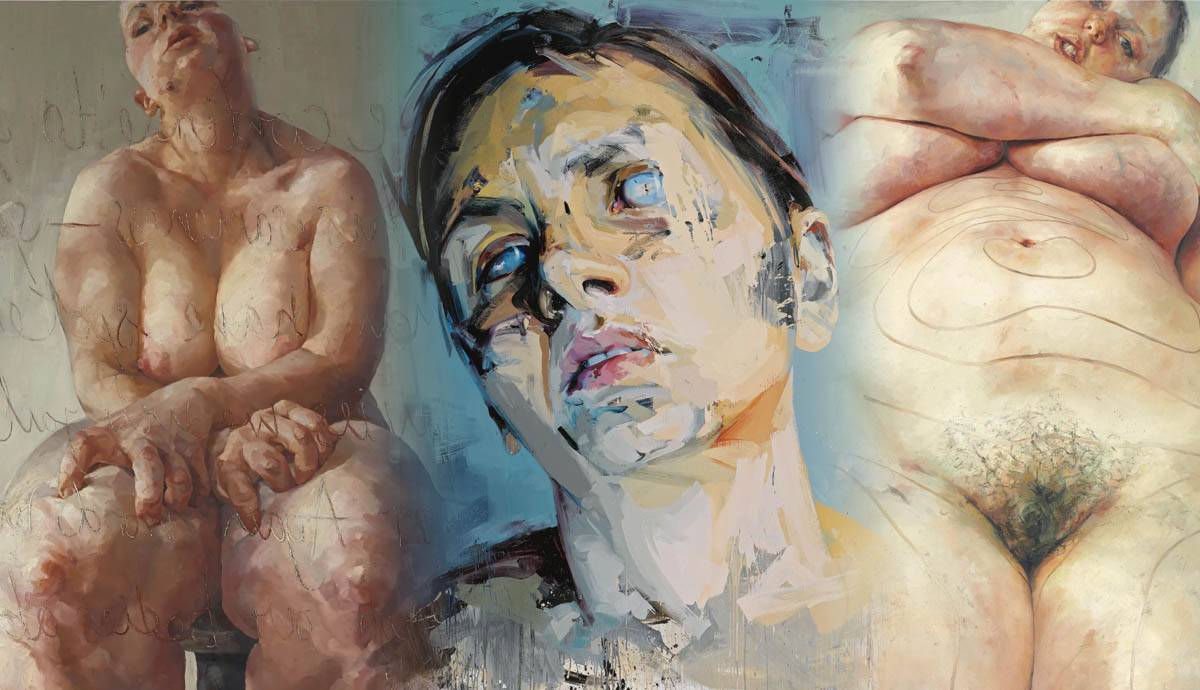 Bruised, overweight, and depicted from what most people see as “unflattering” perspectives: Jenny Saville’s bodies offer an experience beyond art historical and modern beauty standards. With her monumental paintings, the artist challenges the idealized portrayal of naked female bodies, gender, and motherhood. Saville, who is part of the well-known group Young British Artists (YBA), created a texture of seemingly palpable flesh in her paintings that appears to be unparalleled in art history, even though her works are heavily inspired by the old masters. Here is an overview of the artist’s life, work, and role as a feminist artist:

Jenny Saville’s Education and Career as an Artist

Jenny Saville’s career as an artist started early. She painted since she was a child and even had her own studio as a seven-year-old, which at the time was only a broom cupboard. In an interview with the Royal Academy Magazine, the artist said: “Grown-ups would come to the house and ask me what I was going to do when I grew up. I would always think, what do they mean? I’m an artist.” Saville would later study at the Glasgow School of Art and earn her degree in 1992. At her graduate show, she sold all her works and one of the exhibited paintings was used for the cover of the Times Saturday Review.

The art collector and businessman Charles Saatchi became aware of the works of her graduate show and purchased several paintings that were sold at the show. He commissioned her to do more paintings which were displayed at the Young British Artists III show at the Saatchi Gallery in 1994. Her immense success at her graduate show and the support of Charles Saatchi launched her career when she was only in her early twenties.

Jenny Saville is part of the influential group called Young British Artists (YBA). The YBA is a group of artists who graduated in the late 1980s and early 1990s and who started to exhibit their work during that time. They are known for their open way of using materials, shocking artworks, and their entrepreneurial approach.

Propped was described by Sotheby’s as “the groundbreaking self-portrait that launched Jenny Saville’s career”. The painting was sold for $12.4 million at Sotheby’s London in 2018, which broke the record of the highest amount ever paid at an auction for the work of a living female artist. The painting, showing a naked woman looking down at the viewer while sitting on a chair with her hands crossed over her legs, challenged predominant female beauty standards and lead to Charles Saatchi buying as much of Saville’s work as he was able to.

The monumental painting Fulcrum shows the seemingly tactile depiction of flesh and unidealized women’s bodies that Saville is famous for. It appears almost impossible to know where the individual bodies begin and where they end. The models of the painting are the sister and mother of Saville’s partner. The work also depicts the body of the artist’s stepmother mixed with Saville’s own head. Despite the shocking effect the painting has on many viewers, she described the process of making the set-up by saying that it was “hilarious doing it” and that it was “a funny day or two.”

Rosetta II, which was made during the artist’s time in Italy, is an interesting example of Saville’s artworks showing only the face of her subject. The young woman who modeled for the painting was from a blind school in Naples. According to Paul Luckkraft, the curator of Saville’s solo show at the art gallery Modern Art Oxford, the depiction “is a rare occasion of Saville making a single person the subject of a work, almost taking the form of a portrait.”

Jenny Saville’s The Mothers was inspired by art historical depictions of mothers, as well as the artist’s personal experiences. Leonardo da Vinci’s The Virgin and Child with Saint Anne and Saint John the Baptist was an important source of inspiration for the artist. Her parents had a reproduction of Da Vinci’s drawing in their home, which Saville viewed as a kind of permanence.

She was also heavily influenced by her own experiences as a mother but had some difficulty with this approach. Saville said: “It is all right to be a female painter but to also be a mother and a female painter is something you don’t really want to advertise. Or that’s how it was seen.” By depicting motherhood from such a different perspective, Saville challenges the art historical and omnipresent notion of how and what mothers should be.

A remarkable aspect of Jenny Saville’s work is the wide range of influences that impacted her work. Some of Saville’s influences go back to the old masters, which her art historian uncle introduced her to. Her work is impacted by artists such as Rembrandt, Leonardo da Vinci, and Peter Paul Rubens.

Saville’s figures have often been compared to Rubens’ voluptuous women, but with a modern and not idealized characteristic. As a result of this often-discussed connection, Saville’s work was shown in a room of the exhibition Rubens and His Legacy. Van Dyck to Cézanne at the Royal Academy in 2015. Despite the strong impact artists such as Rubens had on her work, Saville’s art offers depictions beyond the male gaze and idealized images of women, which makes her an important representative of feminist art.

Even though Saville’s work is figurative and influenced by the old masters, she is also heavily inspired by abstract artists and modern painters. These artists include Willem de Kooning, Jackson Pollock, and Lucian Freud. She explained this wide range of influences by saying that the periods of the artworks she looks at for inspiration are not relevant to her. She searches for connections between the paintings. This is how Saville vividly described the process of her work: “When I work, there will be art-history books all open on the floor of my studio. There will be a detail of a De Kooning painting, Picasso’s Guernica, Rembrandt’s Descent from the Cross, and a book that looks at the technique of Rubens, and all those images are buzzing around me at the same time.”

Jenny Saville’s works have often been described as important examples of feminist art. Even though Saville herself claimed to be more interested in bodies in general than specifically female bodies, her work is still greatly influenced by feminist theories and writers, like the écriture feminine, the philosopher Julia Kristeva, and Luce Irigaray. Écriture feminine, which can be translated with “women’s writing” aimed for a way of writing that offers a new approach from a feminine perspective and that does not align with the predominant masculine and patriarchal literary tradition. The philosophers Julia Kristeva and Luce Irigaray contributed to the écriture feminine. Saville said in an interview “I was trying to attempt to paint the female and they were attempting to write the female.”

Saville was introduced to feminist theory during her time on a scholarship in the USA, which influenced her work greatly. She described her works of that time as depictions of the attempt to combine feminist ideas and art while still staying true to her style of painting. A passage of Luce Irigaray’s text is carved into Saville’s famous painting Propped. The passage of Irigaray’s text says: “If we continue to speak this sameness, if we speak to each other as men have spoken for centuries, as they taught us to speak, we will fail each other. Again….Words will pass through our bodies, above our heads, disappear, make us disappear.” Saville said the passage of Luce Irigaray’s text became almost a slogan for herself.

Jenny Saville’s Depictions of Surgery and Images from Medical Books

In 1994, Saville had the opportunity to witness the work of a New York plastic surgeon during his operations. Her interest in and involvement with plastic surgery, the human anatomy, and depictions from medical and pathology books shaped her work as an artist. The moving around of the flesh and women’s desire to enhance themselves through cosmetic surgery fascinated Saville. Her paintings do not only examine the seemingly violent aspects of surgery and the vulnerability of the body but also the structure of human flesh and anatomy.

Jenny Saville’s work Witness is based on a photo from a crime scene. The painting explores themes that are common for the artist’s work, like blood, flesh, violence, wounds, and medical or forensic photographs. Saville said that she likes the “raw quality” of these photographs, but that artistic skills and the right use of paint are necessary to transform shocking pictures into art. Otherwise, the artwork would look like a cheap trick. Despite the horrific images Saville saw during surgery, she does not view cosmetic surgery as good or bad. However, the feminist aspect of her involvement with the topic and the thematization of women undergoing complex operations to achieve a certain appearance is still visible to many viewers.