7 Facts About the Kingdom of Kongo: Africa’s Great Catholic State

From the fourteenth until the twentieth centuries, the central African Kingdom of Kongo developed a unique cultural heritage. It also left an outsized influence among European observers. 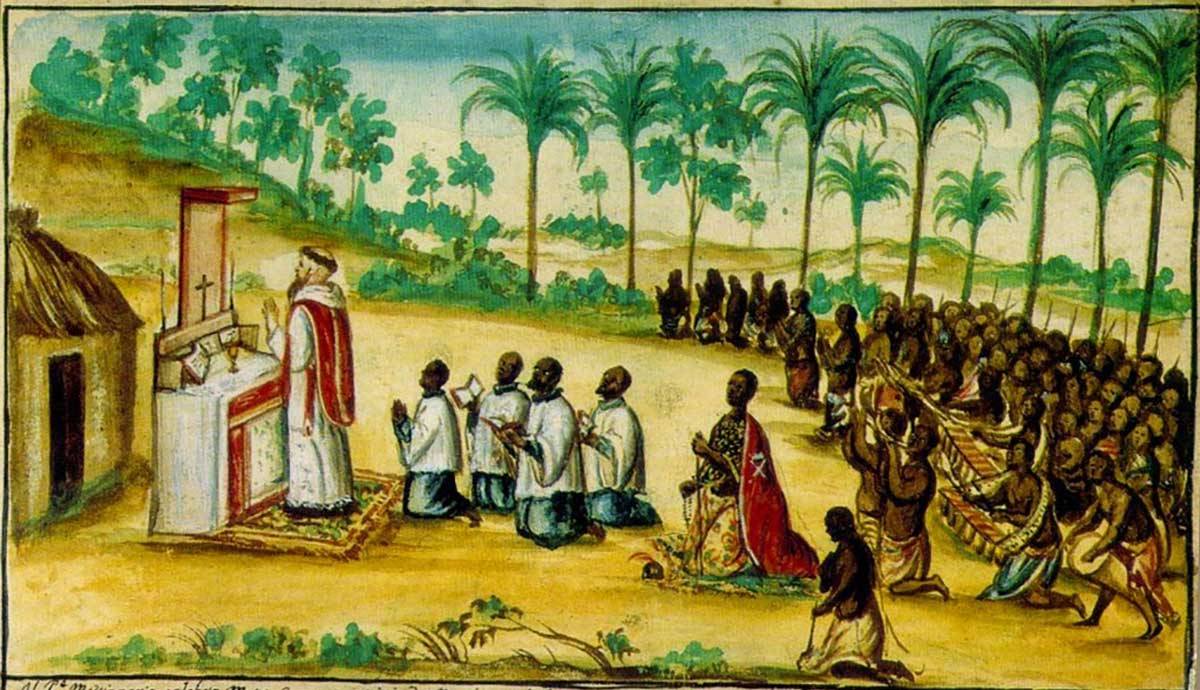 Today, two countries in sub-Saharan Africa call themselves the Congo. Their names in turn come from one of Africa’s longest rivers, which flows between the continental interior and the Atlantic Ocean. To the south lies the country of Angola — another piece in the puzzle we will seek to unravel here.

What do these places all have in common? The answer is the historical Kingdom of Kongo. For over five hundred years, this sizeable state dominated the west-central African Atlantic coast. It would be egregious to downplay its influence on world history. After all, it was from this region that the largest number of enslaved Africans were shipped to American shores. The kingdom’s religious history is equally as important. In Kongo, a unique fusion of indigenous traditions and Roman Catholicism developed. This syncretism would influence everything from conceptions of kingship to art.

1. The Kingdom of Kongo Is One of Africa’s Best-Documented Polities

When researchers talk about sub-Saharan Africa, they usually comment on the lack of written records in much of the continent. It is true that pre-colonial African societies tended to pass information and stories down orally instead of in writing. However, the Kingdom of Kongo challenges the generalization that all of Africa was a dark, unrecorded historical wasteland.

Most of our surviving documents were composed by outside observers, especially missionaries from Portugal and Italy. They recorded the kingdom’s history (as told by informants), genealogies of their rulers, and cultural and religious customs and practices. While inevitably tainted with European biases of the times, these records are still critically important for historians seeking to understand the Kingdom of Kongo.

Sadly, not many documents written by the residents of Kongo have survived. What has survived is essential. One of the kingdom’s greatest rulers, Afonso I (ruled c. 1509-1543), wrote some two dozen letters to his counterparts in Portugal. Educated by Portuguese missionaries, Afonso recorded events from civil wars and succession disputes to religious developments. In some letters, he expressed his anger over the increasing Portuguese demand for slaves from his domains. Ultimately, however, Afonso did not end the slave trade in his lands.

European contact with the Kingdom of Kongo actually predates Christopher Columbus’ arrival in the Caribbean by almost ten years! The Portuguese sailor Diogo Cao reached the mouth of the Congo River around 1483 — part of his country’s broader efforts to establish global trade relations. Catholic missionaries entered central Africa not long after. By 1491, a number of local rulers in Kongo had received baptism. The King (mwene kongo) at the time, Nzinga a Nkuwu, was among them. Although he adopted the name João I (after his Portuguese counterpart), he did not follow the new religion closely.

This norm would change under King Afonso I. Afonso and later kings made a great effort to establish Catholicism among the people of Kongo. To European observers, the Kingdom of Kongo was a bastion of the Catholic faith amid a sea of paganism.

Relations between Kongo and Portugal were often strained. The Portuguese, with their expanding worldwide empire, wanted Kongolese land and resources. The two kingdoms fought a number of wars for regional dominance, particularly during the seventeenth century. The international slave trade proved to be a particular point of contention between Kongo and Portugal. Millions of central Africans fell victim to slave traders during the Kingdom’s history.

3. Religion in the Kingdom of Kongo Merged Catholicism and Local Beliefs

Before the arrival of the Portuguese, the residents of the Kingdom of Kongo followed religious traditions that ostensibly diverged wildly from Catholicism. Carved wooden figures known as minkisi (sing. Nkisi) were used by spiritual practitioners (called nganga) to contain and channel the spirits of deceased ancestors. European observers until the twentieth century often referred to minkisi pejoratively as “idols” or “fetishes,” but these terms fail to capture the minkisi’s true essence.

Like Catholic Christianity, Kongolese religion involved a single supreme God. However, this deity, Nzambi a Mpungu, was distinct from the Christian god in a number of ways. While both beings had created their respective cosmologies, Nzambi a Mpungu was a more impersonal deity. After the Kongolese creation, he had withdrawn and left the affairs of the universe in motion. More important to the people of Kongo were lesser gods and familial ancestors. It was believed that nganga could communicate directly with these beings, who could be either good or malevolent. Religion in pre-Catholic Kongo focused more on benefits in the earthly realm, although the afterlife remained important.

The adoption of Catholicism by the Kings of Kongo was facilitated by translation. Portuguese and Italian missionaries rendered key Christian concepts in terms familiar to the Kongolese. For example, Nzambi a Mpungu was used to refer to the Christian god, despite the key conceptual differences. The missionaries also translated nkisi as “holy.” Translation, however indirect or even incorrect, facilitated the spread of the Catholic faith among the people of Kongo.

Yet the Kingdom of Kongo never entirely let go of its original animistic beliefs. The belief in ancestors and the power of minkisi most notably persisted. This caused friction between ordinary Kongolese believers and the Capuchin priests who missionized between the late seventeenth and eighteenth centuries. Some priests reacted violently to the continued observance of indigenous traditions, as depicted in artwork from the time.

Like the arts of other contemporary African cultures, art in the Kingdom of Kongo most often took on a religious function. After periods of sustained contact with the Portuguese, indigenous artists in Kongo adopted many European crafting techniques and traditions. These included the use of stone for buildings and the Christian crucifix.

Yet Kongo’s crucifixes, in particular, seem to combine indigenous Kongolese and European styles seamlessly. In the image above — a later crucifix from the eighteenth or nineteenth centuries — Jesus Christ is shown hanging on the cross in the usual manner. However, several key differences from European depictions of the crucifixion stand out. The shapes of Christ’s feet and torso, as well as the design of his face, are more typical of a central African style.

The praying figures atop the cross are harder to explain. Scholars still aren’t sure who they are meant to depict. The Metropolitan Museum of Art in New York speculates that the figures are possibly mourners or even ancestors. The ambiguous nature of these figures might point to the fusion of Kongolese traditions of ancestor veneration with the Catholic belief in saints.

According to the scientific journal Cell, European slavers shipped over 12 million Africans across the Atlantic Ocean between 1515 and 1865. Based on the surviving slave ship records, a plurality (over 45 percent) of these captives originally came from the region surrounding the Kingdom of Kongo. Scientists have even demonstrated the continued genetic legacy of these enslaved Kongolese people through living American and Caribbean genomes.

The local slave trade predated the Portuguese arrival at the Congo River in 1483. However, as the letters of King Afonso attest, it ballooned starting in the sixteenth century due to foreign involvement. Slave trading became a lucrative business for all parties involved, including the Europeans and Kongo’s regional neighbors. The demand for war captives both fueled and was fueled by the slave trade. The Kongo Civil Wars, which originated as a succession dispute between competing dynasties, raged from 1665 until 1709 and provided local slavers and the Portuguese alike with millions of new captives.

The international slave trade was a major trigger for the Antonian rebellion at the start of the eighteenth century. As civil war raged, a young woman named Beatriz Kimpa Vita claimed prophetic knowledge. She alleged that she could channel the spirit of Saint Anthony of Padua and predicted a coming era for Kongo free of Portuguese interference. Most importantly, she reconceptualized Christianity in distinctly Kongolese terms, placing the Kingdom of Kongo at the center of the early Christian world. For Beatriz, Jesus and the earliest Church members had actually come from Kongo, not Roman Palestine.

Starting in 1704, Beatriz’s movement amassed thousands of followers and even briefly occupied the ruined Kongolese capital of Mbanza Kongo. Unfortunately for them, however, King Pedro IV had the backing of the Portuguese. In 1706, the King’s troops captured Beatriz and sentenced her to death for heresy. Her movement would outlast her by two years, but eventually, Pedro would reestablish royal authority in Kongo.

6. One Kongolese Ruler Sent an Ambassador to the Pope

Because of their early adoption of the Catholic faith, it seems natural that the kings of Kongo would eventually send a representative to the Vatican. This is exactly what happened at the start of the seventeenth century.

In 1604, the King of Kongo, Álvaro II, sent a delegate named Emanuele Ne Vunda to meet with Pope Paul V. For the next four years, Emanuele Ne Vunda would travel across the Atlantic world, visiting Brazil, Portugal, and Spain. King Álvaro had hoped an embassy would strengthen Kongolese Catholic legitimacy, and the Pope does seem to have received Ne Vunda’s visit positively.

Unfortunately, Ne Vunda was very sick by the time he reached Rome in 1608. Within three days of his arrival in the city, he had died. A painting of Ne Vunda can still be seen at the Quirinal Palace in Rome, directly next to a fresco depicting the Japanese embassy of Hasekura Tsunenaga.

7. The Kingdom of Kongo Technically Survived Until 1914

Surprisingly, as civil wars decimated the region and Portugal continued to expand control of its colony in Angola, the Kingdom of Kongo persisted. It was definitely much weaker than it had been at its height; its rulers in the late nineteenth century were heavily dependent on Portuguese power and influence. Still, Kongo maintained the façade of an independent kingdom.

This would all change in 1914, around the outbreak of the First World War. After a failed revolt by the people of Kongo, Portugal decided to officially annex the kingdom. The final king, Manuel III, lost his throne, and his lands were absorbed into Portuguese Angola. The Kingdom of Kongo was no more.

Here Is How Women Resisted Slavery in the American South