HomeStoriesWorld War I: The Writer’s War

The horrific static fighting conditions of World War I produced some of the greatest writers of their generation who are still remembered today. 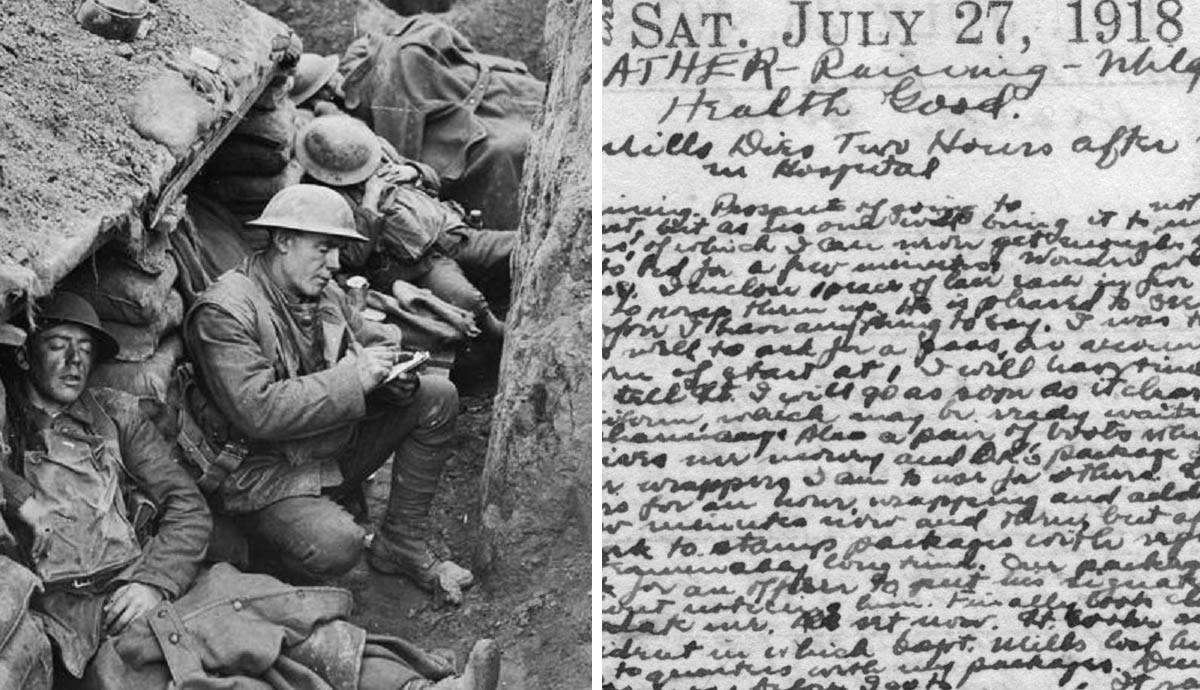 The First World War has largely shaped the world as we know it today, its effects being numerous and long-lasting. However, there can be no argument that it was most intensely felt by those who were forced to suffer through the new, brutal, and impersonal face of industrial-scale warfare and killing. The youth of this era, the “Lost Generation” or “Generation of 1914,” were defined by this conflict so deeply that the very literary spirit of the modern era had been colored by their suffering and experiences gained during World War I. Much of our current perspective on war and even fantasy, especially in the English-speaking world, can draw their roots back to the mud and blood-filled trenches of the Western Front.

The carnage of the First World War was unlike any the world had experienced before and was one well beyond the imaginations of any of those who enlisted. Before 1914, war was believed to be some noble cause, a grand adventure, something to provide excitement and prove your bravery and patriotism to your peers.

The reality proved to be anything but. Nearly an entire generation was obliterated and left in the mud – a “Lost Generation” mourned ever since. World War I would become well known as the world’s first industrial war, with machine killing, impersonal methods of combat, and near-constant fear of death. New inventions such as machine guns and highly explosive, long-ranged artillery meant that men could be killed by the dozens in moments, often without warning or even knowing what had happened.

The establishment of trench warfare and new defensive tactics and technologies meant that fronts would often remain static for very long periods, with little to do as soldiers cowered and hid in their trenches, waiting for something to happen while never being sure if the next falling shell would prove to be their end. This mix of long periods of boredom and inactivity struck through with mind-numbing horror created a fertile writing environment for those stuck in the trenches of the western front.

Most of the writing done in the trenches were letters home, as oftentimes soldiers would find themselves homesick. In the case of British soldiers, they usually found themselves in relatively close proximity to send and receive regular letters from home. While many used this as an escape from the world around them, countless more found themselves deeply affected by the stark and brutal reality of warfare.

Even in the century since World War I, we haven’t seen any conflict that exposed soldiers to such a constant and near-static scale of concentrated destruction. The land around them was remade each day with fresh shelling; bodies often left in the open or half-buried in the mud. This nightmarish environment was one of unimaginable misery, destruction, and death. Caught in a world of daily and endless terror, at times for years on end, the literary themes of the time often reflected this. Many of the Lost Generation’s most prolific and well-known poetic writers possessed a tone of senseless brutality born from their experiences in the trenches.

Siegfried Sassoon is one of the best-known poets of World War I, having been decorated for bravery while also being an outspoken critique of the conflict. He believed that the ideas of patriotism were an important reason behind the fighting.

Sassoon was born to a well-off family in England in 1886, and by all accounts, had a rather modest and calm upbringing. He received an education and a small private income from his family that allowed him to focus on writing without the need to work. A quiet life of poetry and cricket would eventually come to an end with the outbreak of World War I in 1914.

Siegfried Sassoon found himself swept up in the patriotic fires that spread through the nation, quickly enlisting as a commissioned officer. It is here that he would become renowned. The horrors of war would have an odd effect on Sassoon, whose poetry shifted from romantic sweetness to disturbing and all-too-accurate portrayals of death, filth, and the horrors of war. The war left scars on his psyche as well, as Sassoon would regularly be seen performing immense feats of what was described as suicidal bravery. Inspiring those serving under him, “Mad Jack,” as he became known, would be awarded and recommended for numerous medals, including the Military Cross. However, in 1917, Siegfried Sassoon would publicly make his true thoughts on the war known.

While on leave in late summer of 1916, Siegfried Sassoon decided that he’d had enough of the war, enough of the horrors, and enough of dead friends. Writing to his commanding officer, the press, and even the House of Commons via a member of parliament, Sassoon refused to return to service, decrying what the war had become. Due to his reputation and widespread adoration at home and among the ranks, he was not dismissed nor court-martialed and instead sent to a psychiatric hospital for British officers.

Here he would meet another influential war writer, Wilfred Owen, whom he would take under his wing. The younger Owen became very attached to him. Eventually discharged from the hospital, Sassoon and Owen returned to active duty in France, where Sassoon survived an incident of friendly fire, which removed him from the remainder of the war. Siegfried Sassoon was best known for his work during the war, as well as for his promotion of Wilfred Owen’s work. Sassoon was largely responsible for bringing Owen into the mainstream.

Born a few years after Sassoon, in 1893, Wilfred Owen was often seen as inseparable from Siegfried Sassoon. Both produced some of the most brutal depictions of World War I through their poetic works. While not wealthy, Owen’s family nonetheless provided him with an education. He discovered an aptitude for poetry, even while working multiple jobs and positions to help pay for his schooling.

Owen was at first without the patriotic fervor that gripped much of the nation and did not enlist until October of 1915 as a second lieutenant. His own experiences differed from Sassoon’s, as he saw the men under his command as lazy and uninspired. Several traumatic events would befall the young officer during his time at the front, from gassings to concussions. Owen was struck by a mortar shell and forced to spend several days in a muddy trench, dazed and among the shredded remains of one of his fellow officers. While he did survive and was eventually returned to friendly lines, the experience had left him deeply disturbed, and he would be sent to recover in Craiglockhart, where he would meet his mentor, Siegfried Sassoon.

The two became incredibly close, with Sassoon mentoring the younger poet, who came to idolize and revere him. During this time, Owen came into his own as a poet, focusing on the brutal and grim face of war which he had come to learn, in no small part thanks to Sassoon’s encouragement. Their short time together left a profound impact on the young Wilfred Owen, who saw it as his duty to assist in Sassoon’s work in bringing the reality of war to the masses through poetry and literature. As such, in 1918, Wilfred Owen decided to return to France’s front lines, against the sincere wishes of Sassoon, who went so far as to threaten Owen with harm to keep him from being fit to return.

Perhaps envious or inspired by Sassoon’s bravery and heroism earlier in the war, Owen took a daring lead in several engagements, earning him a medal he felt was needed to truly be justified in his writing as a warrior poet. However, tragically, this heroism was not to last, and in the twilight of World War I, one week before the armistice, Wilfred Owen was killed in combat. His death would prove crushing for Sassoon, who only heard of his death months after the end of the war and could never truly accept his passing.

While Sassoon’s work had been popular during the war, it was not until after the fighting had finished that Wilfred Owen would become famous. His works became known across the English-speaking world as he has come to be seen as the greatest poet of the Lost Generation, ultimately overshadowing even his mentor and friend.

A Canadian born in 1872, John McCrae was a resident of Ontario and, while not a poet by trade, was well educated in both English and Mathematics. He would find his calling in his younger years in medicine and would go on to serve as a Lieutenant in the Canadian forces during the Second Boer War at the turn of the century. All together an accomplished individual, McCrae would proceed to ever higher positions in medicine and education, even co-authoring a medical text just before the start of World War I.

McCrae was appointed as one of the leading medical officers in the Canadian Expeditionary Force and was among the first Canadians to arrive in France in 1915. He participated in some of the war’s bloodiest battles, including the famous Second Battle of Ypres. It was here that a good friend of his was killed, serving as inspiration for perhaps the most famous war poem to have ever existed, “In Flanders Field.”

Many legends surround the actual writing of the poem, with some suggesting that it had been written on the back of a cigarette box as McCrae sat on a field ambulance, discarded to one side but then rescued by a few nearby soldiers. The poem became immediately famous, and McCrae’s name was soon one of the best-known names of the war (albeit often misspelled as McCree). It has remained ingrained in the English-speaking world, especially in the Commonwealth and Canada. “In Flanders Field” is recited at ceremonies honoring the dead across countless towns and cities the world over. As with so many others, McCrae did not survive the war, succumbing to pneumonia at the beginning of 1918; yet another resonant voice of the Lost Generation silenced by the First World War.

Ultimately, the war gave birth to as many poets and literary visionaries as it snuffed out, talents both known and unknown to the world. It is without a doubt a unique conflict, which has left long felt and resounding impacts in the literary and artistic scenes even over a century after its conclusion. Perhaps because of this, the Lost Generation will truly never be forgotten.