Field Marshall Erwin Rommel, Germany's most famous military officer, would become embroiled in an assassination attempt on Hitler himself, leading to his own death and cementing his place in history. 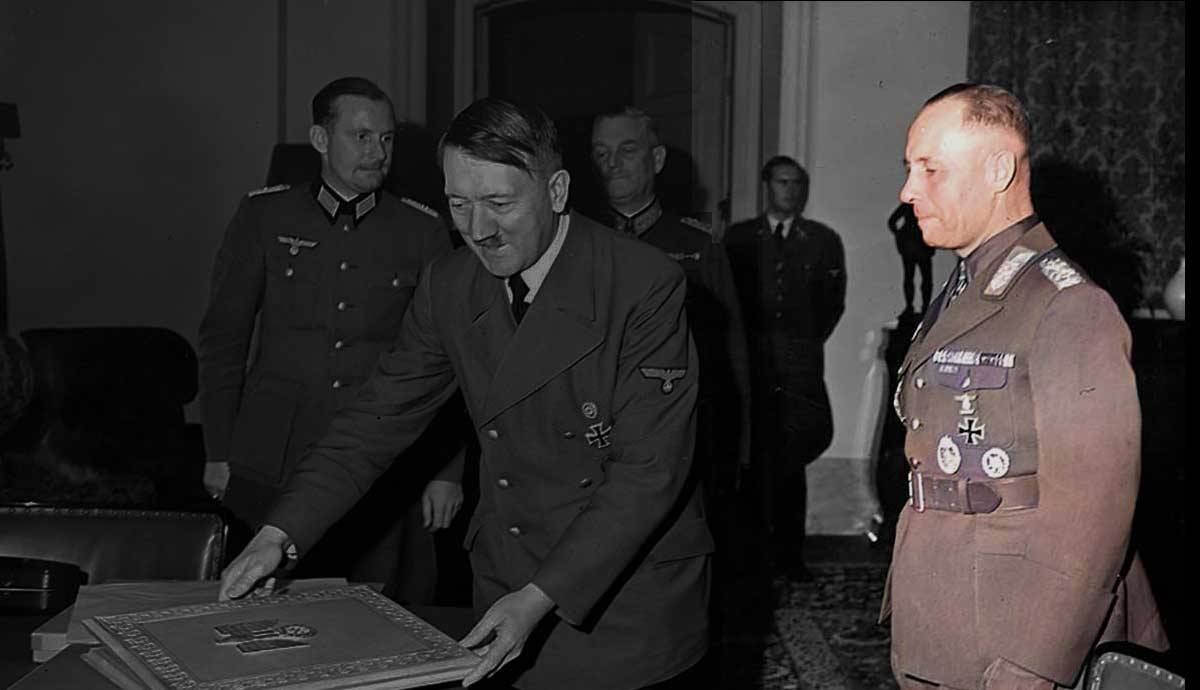 By 1944, it seemed clear to many in the German High Command that Germany would not come out victorious against the Allied powers. Field Marshall Erwin Rommel, the Desert Fox, had by this time become an icon of propaganda by both Germany and the Allies. Despite a close personal relationship with Hitler, Rommel would find himself embroiled in the July 20 plot, an attempt on the Fuhrer’s life. His involvement would lead to his death, but Rommel would still be treated to a hero’s funeral, and his involvement was kept secret. Even after the war ended, Rommel had a near-mythical status across the political spectrum. But was this reputation well earned, or an inflated sense of people looking for a silver lining in a conflict with so much horror and evil?

Field Marshall Erwin Rommel had, by 1944, become perhaps the single most famous man in the German army. Beginning his career early in the 20th century, he would serve with distinction as a field officer in the First World War in the Italian front and continue to serve Weimar Germany after the armistice. It would not be until Hitler took a personal note of Rommel during the Nazi party’s rise to power that he would become truly renowned. While not an actual member of the Nazi party, Rommel found himself in a close friendship with Hitler, one which benefited his career considerably.

Because of Hitler’s favoritism, Rommel found himself in a position to command one of Germany’s newly formed Panzer divisions in France, which he would lead with impressive tact and competency. Following this, he was assigned to take charge of the German forces in North Africa, sent to stabilize the failing Italian front against the Allies. Here he would earn the title “Desert Fox” and be viewed with great respect and admiration by friends and foes alike.

Germany would ultimately lose the African campaign, having been unwilling to dedicate the manpower and material needed to combat the Allies, meaning that oftentimes Rommel was put up against two-to-one odds or worse. Despite this, Rommel was still seen as a hero in Germany, a paragon of professionalism, tactical acumen, and resourcefulness. Not wishing for his reputation to be damaged, Hitler commanded his favored General to return from North Africa when it seemed things were not going well and instead assigned him elsewhere in order to preserve his mythical status.

At this point, Rommel was briefly reassigned to Italy, where his forces would disarm the Italian military following their surrender to the Allies. Rommel was initially in charge of defending the whole of Italy, but his initial plan of where to fortify (north of Rome) was seen as defeatist by Hitler, who had him replaced by the far more optimistic and similarly famous Albert Kesselring, who would go on to make the famous Gustav Line.

With this, Rommel was sent off to oversee the construction of the Atlantic wall along the coast of France. During this time, Rommel and Hitler were often at odds, with Hitler considering his failure in North Africa and his “defeatist” attitude in Italy to have soured their relationship, along with some envy over the German people’s love of him.

As such, despite his seemingly important posting in France, not a single soldier was directly under Rommel’s command, and he was intended to be used more as an adviser and morale-boosting presence. The end result would be a tangled mess of command structure, leading to a lack of any single cohesive strategy in the face of the eventual landings that occurred in the summer of 1944. Even as battle raged in Normandy, Rommel and a number of other officers had taken matters into their own hands; they would attempt to assassinate the Fuhrer himself.

It’s challenging to paint a perfect picture of the famous plot against Hitler’s life. The July 20 plot, as it was known, is difficult to know much about as the Nazis had killed most of those involved, and many written works were later destroyed as the war ended.

Many members of the German military had come to resent Hitler. Some believed that the policies of the Nazis were too extreme and criminal; others simply thought that Hitler was losing the war and had to be stopped so that Germany could conclude the war with an armistice rather than a total defeat. While Rommel had indeed been taken in by Hitler’s charisma and shared a friendship with the Fuhrer, he often looked the other way or seemed unwilling to believe in the atrocities that the Nazis would take, especially regarding Jewish citizens of Europe.

As time went on, these facts became harder and harder to ignore, along with the genocidal war being waged against the Soviets in the east. Initially hesitant, Rommel instead pressured Hitler to make peace with the Allies. However, this is seen by many as naiveté since nobody in the world would at this point trust Hitler in the face of his repeated breaking of treaties prior to the war. The conspirators of the plot needed Rommel, a national hero by this point, to help rally the population in the wake of the assassination and to give credit to the military takeover that would occur afterward. What would follow was Rommel’s seemingly reluctant participation in the plot. Still ultimately, his loyalty to Germany and its well-being would cause him to side with the conspirators.

On 17 July, a mere three days before the assassination was to occur, Rommel was badly injured when his car was attacked by Allied aircraft in Normandy, causing what were believed to be eventually fatal injuries. While his injury or death would have had severe complications in the aftermath of the assassination, this unfortunately never came to be as Hitler survived the attempt on his life and began a rapid, thorough, and paranoid purge of the German military. Several conspirators, generally under torture, named Rommel as an involved party. While most of the other conspirators were rounded up, put before a mock court, and executed, Hitler knew this was something that could simply not be done to such a national war hero as Rommel.

Instead, the Nazi party secretly offered Rommel the option to commit suicide. It was promised that should he do so, the nature of his involvement in the plot and his death would be kept secret, and he would be buried with full military honors as a hero. More importantly for him, however, was the promise that his family would remain entirely safe from retaliation and even receive his pension while at the same time threatening them with collective punishment for his crimes under a legal principle known as Sippenhaft. Perhaps to Hitler’s disgust, he found himself forced to order a National Day of Mourning for someone he believed to have tried to kill him in order to keep the appearance that Germany’s heroic Field Marshall’s death was indeed accidental.

The Legacy of Erwin Rommel

Rommel remains unique among German commanders as he was not only used as a propaganda tool by both the Axis and Allied powers, but his reputation would continue after the end of the war. Joseph Goebbels, the chief propagandist of the Nazi Party, was a firm believer in near-total propaganda coverage, similar to how the British had operated during the First World War. As such, he was eager to use Rommel as a shining example; a steadfast career officer who had served with distinction in the First World War, an old hold-over to give legitimacy to the Third Reich, and whose impressive track record and enjoyment of the limelight made him an easy focus for propaganda.

Likewise, Rommel and Hitler formed a genuine friendship outside of politics, and as ever, nepotism reigned supreme in despotic regimes. This meant that Rommel was easily turned into a superstar within Germany very quickly. Even within the German military, he held a reputation as he was known as a highly hands-on officer who made important steps to interact on an equal level with not just the soldiers under his command but also Allied and even enemy prisoners of war, treating all soldiers with nothing but respect.

Even Allied propaganda was eager to build up the legend of Rommel during the war. Part of this was due to his victories; if the Allies built up the status of such a high and mighty general, then it made their losses seem more acceptable at the hands of such a man and would make their eventual victory even more impressive and monumental. Likewise, there was a desire to have Rommel seen as a rather reasonable man, that for all the evil and horror that were the Nazis, it was only a rational, respectable general like him who could defeat their forces.

In the wake of the war, Germany and the victorious Western Allies found themselves in need of a uniting symbol, something which Rommel and his deeds, both real and exaggerated, could provide. With the splitting of Germany into the Soviet puppet in the east and the Western-Allied back Federal Republic in the west, there was a very sudden and drastic need by the capitalist Allies to integrate Germany into what would eventually become NATO.

To this end, Rommel seemed the perfect hero for both parties as not only was he considered to be a reasonable, loyal, and steadfast soldier of Germany rather than the Nazi party, his alleged involvement in the July 20 plot and the discovery of the nature of his death made him a near hero in the West. While his meteoric rise would have undeniably not been possible without both the Nazi party and Hitler’s personal support, many of these factors have often been overlooked or conveniently forgotten. It should be remembered, however, that despite the myths and legends surrounding him, Rommel was, more than anything, only human. His legacy, for better or worse, must always be considered a complex story, including both the good and the bad, as is often the case in life.