The First World War was known as a writer's war, with much war poetry and literature we know today having originated during the conflict. Here are three Great War authors. 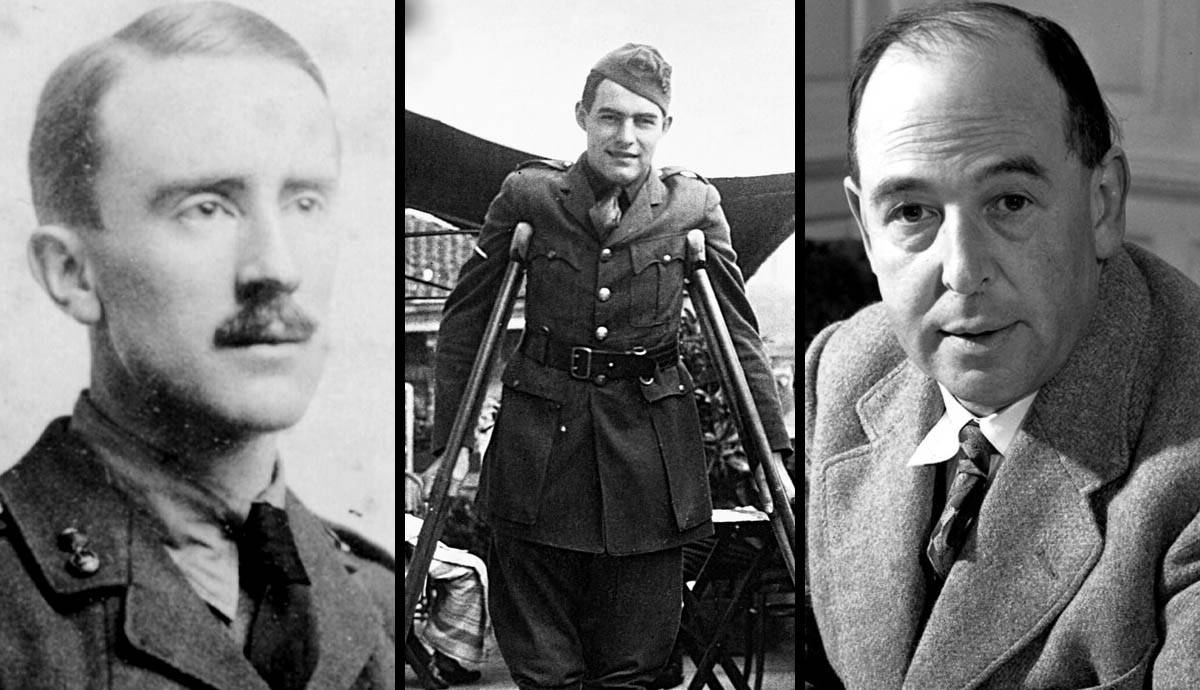 Most of the war poetry and literature that we know today originated during the First World War. Likewise, even pieces that do not directly reference the war owe a great deal of their stylistic influences to the experiences the authors had suffered during their time on the front lines. These authors were present on the front, from the still genre-defining J.R.R. Tolkien to the fantastical C.S. Lewis and even the Nobel Prize-winning Ernest Hemingway. They could not help but find themselves profoundly changed by the trials and tribulations they faced while being inspired by the many facets of humanity seen around them.

The First World War introduced a new, horrifying and modern scale of industrial warfare not seen anywhere in the world, much less in the heartland of Europe. Even in the wake of the larger and more costly Second World War, the First World War is still considered by many as “The Writer’s War.” Not only did it change the very face of warfare, but also how we as a society perceived it. Writers indeed produced an immeasurable amount of material both during and after the war in the form of letters, poetry, novels, and more. Even now, this immense body of work likely represents the single largest contribution to the arts out of any conflict.

The war also existed in a unique space, being both modern and pre-modern at once. Tactics quickly evolved into a type of warfare more familiar to us, washing away the notions of nobility, bravery, and adventure that war had previously conjured up in the popular mind. And yet, the structure of the armies that fought this thoroughly modern war was still cemented in an older era. During this period, England primarily existed as a regimented class-based society. Because of this, the British military had always historically been made up of officers drawn from the higher economic rungs of society, and the enlisted masses came from the working class and the poor.

This rigid class structure meant that many well-educated, learned, and scholarly individuals found themselves on the front lines of the First World War and were expected to lead by example with their men. Thanks especially to the rapid mobilization demanded of the war, the British military would exclusively take well-educated or aristocratic candidates for their officer corps, often regardless of experience. Siegfried Sassoon, Wilfred Owen, J.R.R. Tolkien, and C.S. Lewis are all examples of British literary icons who found themselves taken from schools and thrust into the officer corps before being shipped off to France.

Even with the many literary giants that came from England, it would be impossible to discuss the authors of the First World War without mentioning the American author Ernest Hemingway. While it can be argued that other authors and writers from the conflict were more influential, Hemingway’s works hold the important distinction of presenting perhaps the clearest influence from the war, as much of his writing was in the form of war novels and closely mirrored or was inspired from his own experiences in the First World War.

Born in Illinois during the summer of 1899, Hemingway graduated high school in 1917, then worked as a sports journalist for six months before deciding to involve himself in the war effort, which the US had only recently joined. Although rejected by the army due to his poor eye-sight, Hemingway was still able to enter the service under the Red Cross. Just days after his birthday, the young Hemingway, not even twenty years of age, would arrive in Milan, where the horrors of war greeted him almost immediately at a wreck of a destroyed munitions factory.

Hemingway’s time on the front only lasted two months before a wound suffered on the Italian front left him hospital-bound for the rest of the war. Both on the frontlines and during his recovery, the war would profoundly affect him. Witnessing the horrors of war and experiencing the first and most devastating heartbreak of his life afterward would leave Hemginway deeply shaken for years to come. However, his time in Italy would also enshrine his love of adventure, excitement, and danger. His war experience showed the resilience of not just himself but of many members of the so-called “Lost Generation.”

Many American authors in Paris would become famous during their time in the city, referred to in literary circles as the Lost Generation, after the name given to their generation in North America. In the case of Hemingway, his novels The Sun Also Rises and A Farewell to Arms took direct inspiration from his life during the First World War and in the immediate post-war era and would catapult him to fame.  These titles, along with his later work For Whom the Bell Tolls in 1940, became known as defining classics in American literature.

While by all accounts a British author, C.S. Lewis might better be described first and foremost as an Irish author, even if much of his life was spent in England itself. He was born to a Protestant family in Belfast prior to the partition of Ireland. He spent his youth swapping between a number of different schools across England after the death of his mother at age ten. During this time, Lewis found himself interested in anthropomorphic animals, mythology, and the occult, often writing his own works even as a child. Suffering from time spent away from home and combined with the early loss of his mother, young C.S. Lewis would turn away from his faith and become an atheist, finding himself more interested in mythology, ancient literature, and Scandinavian sagas.

With the outbreak of the First World War, C.S. Lewis initially remained in college, having been too young to legally enlist in 1914. This was not for lack of desire; however, and after entering Oxford in 1917, he was allowed to enroll as an officer in the British army, training at the university itself. Here, he met a man who would indirectly change his life like no other, a fellow Irishman named Edward Moore. The two became quick friends, bonding over their shared Irish heritage, and promised each other that if one should die, the other would care for the deceased’s family.

It would not take long for the young C.S. Lewis to be exposed to the horrors of war. He arrived late in 1917 when the war had long been in full swing. On his birthday, the 29th of November, Lewis arrived in the area near the Somme, which had claimed over 620,000 casualties a little over a year before. Lieutenant C.S. Lewis would only stay a little over four months on the frontlines before an incident of friendly fire wounded him badly enough to spend the remainder of the war recovering, then on station within England itself.

At this time, Lewis discovered that his friend Edward Moore had been killed, informed by his most regular visitor, who was Edward’s mother, Janie Moore. The two quickly became close despite their great gap in age. Perhaps due to the earlier loss of his mother, combined with a distanced relationship with his father, who would not even visit him as he recovered, C.S. Lewis was incredibly attached to Janie Moore. Thus, not only would he honor the agreement he and Edward had made in training together, but he would continue to live with and even refer to Janie as his mother in conversations and writings. While it is unsure what exactly the nature of their relationship was, the two were nevertheless deeply connected. It was this relationship that served as a basis for C.S. Lewis’ climb out of the depression he’d suffered for much of his life and ultimately a return to the Christian faith. This faith would serve as a basis for many of his works, including his most renowned series, The Chronicles of Narnia, the first of which was published in 1950.

John Ronald Reuel Tolkien is perhaps one of the greatest and most well-known English authors of modern history. Genre-defining, his works can still be seen reflected in almost all pieces of modern fantasy. Many of today’s fantasy novels are inspired by perhaps the best-known English trilogies in the world, The Lord of the Rings.

Born 1892 in what is now South Africa, J.R.R. Tolkien described himself as an Englishman throughout his life and, in fact, spent most of his life living in England. He moved there at the age of three and remained after his father’s death due to illness. Under his mother’s tutelage, the young Tolkien would quickly prove to be incredibly gifted, fostering a love of language, literature, and plants from his mother, interests that often influenced his writing. With the tragic death of Tolkien’s mother at age twelve, the boy was left orphaned and left under the care of a close family friend, a priest of the Catholic Church.

J.R.R. Tolkien would continue his studies, excelling in his classes and proving an outstanding academic. He discovered a love of constructed languages, something he would later become famous for in his works. While initially hesitant to join the military on the outbreak of the First World War, Tolkien would eventually find himself pressured into enlisting in 1915 after he completed his courses. J.R.R. Tolkien enrolled as a commissioned officer, taking the rank of Lieutenant.

J.R.R. Tolkien would not only see active service during the war but would find himself deployed at the Battle of the Somme, one of the bloodiest battles of the First World War. During this time, Tolkien was made fully aware of the realities of war, but perhaps more impactful to him was an appreciation of his fellow soldiers, specifically, the members of the rank and file made up of mostly laborers and farmers. The character Samwise Gamgee would reflect this deep respect, arguably the most stalwart and brave of the protagonists in Tolkien’s fabled Lord of the Rings. Tolkien even claimed that Gamgee was an embodiment of the common English soldier.

His time at the front would last for the entirety of the Battle of the Somme, from July to the start of November 1916, when he contracted trench fever. This was actually fortunate for Tolkien, as the vast majority of his battalion was wiped out shortly after his departure. Many of his friends died during the war, with some of his closest perishing at the Somme itself. During the war, while recovering from his sickness that would last the following two years, J.R.R. Tolkien would begin to work on the first articles on Middle Earth.

There is a great amount of debate on just how deeply Tolkien’s experiences in the First World War influenced his work. From his own statements and those of his close friends, including fellow author C.S. Lewis, as well as modern Tolkien scholars, it is certain that without that horrible conflict, his genre-defining work may have never come to be.

Ernest Hemingway at the Battle of the Bulge