HomeStoriesOperation Overlord: The Planning & Preparation That Led up to D-Day

Operation Overlord: The Planning & Preparation That Led up to D-Day

D-Day: the most well-known military engagement in history. This invasion would begin the Western Front of World War II and lead to the liberation of France. 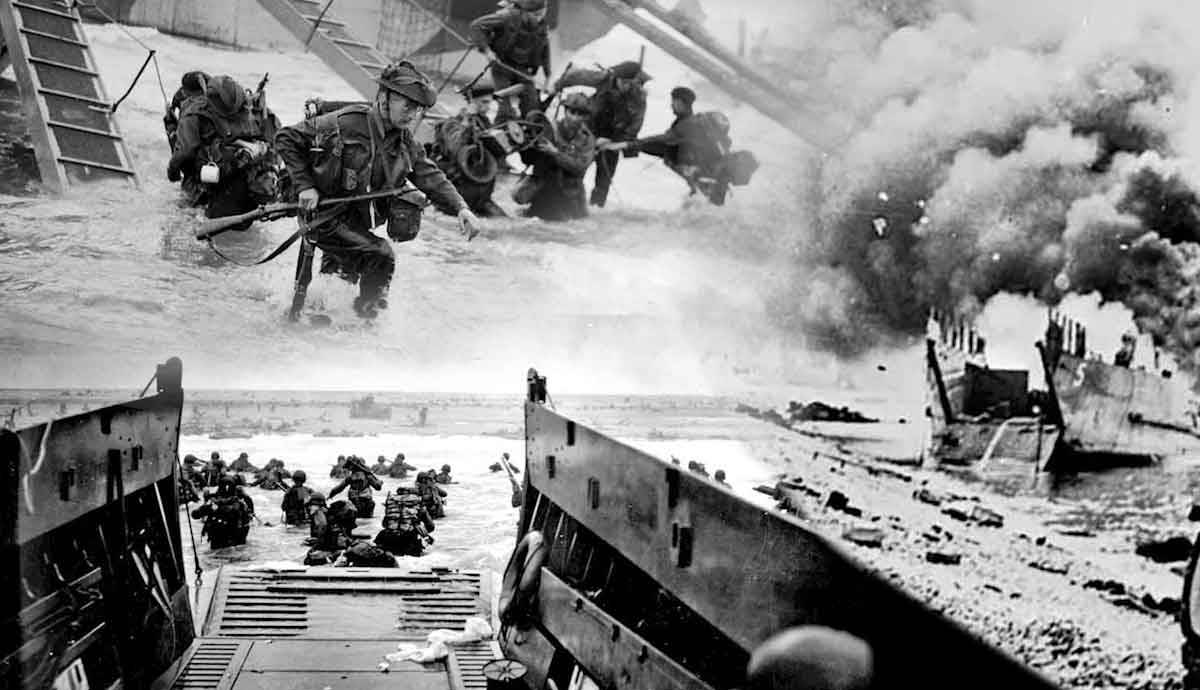 Of all the great military battles throughout human history, it is hardly a stretch to say that one of the most famous of these is Operation Overlord, more commonly known as D-day. On June 6th, 1944, the western Allied forces launched the largest amphibious invasion in history: over 350,000 naval, airforce, and army personnel from twelve countries deployed to France’s northern coast to establish a new front line against the Germans. This was a herculean effort that required untold amounts of planning, preparation, and coordination, all of which helped drastically shift the focus of the Nazis away from the war with the Soviet Union in the east and forced them to split their attention to multiple fronts. Regardless of doubts about the war there might have been before the summer of 1944, D-day marked a clear and distinct shift in public opinion of the war, proving that victory was undoubtedly and assuredly within reach for the first time in years.

By the summer of 1944, World War II had been raging across the globe for five years. War had come to Western Europe in the Summer of 1940 when, after the invasion of Poland, the German forces turned their sights on France and Britain. Both had turned down offers of peace from Hitler, who wished to focus his attention on his main enemy, the Soviet Union, and believed that the western Allies had no stomach for war. Through a rapid invasion known as the Battle of France, the Germans completely ejected the Allies from the continent, subjugating France under a collaborationist government and forcing the remnants of the French and British militaries to flee to England. With this, the war in Western Europe had ended on land. However, attempts by Germany to break the resolve of the British would continue through to the Battle of Britain, where Royal Air Force pilots engaged with the members of the Luftwaffe in the skies over England.

During this time, the war raged in the east as millions of Russian and German soldiers clashed across a massive front. Desperate for any help they could get, the Soviets constantly demanded that the Western allies, at first consisting only of the British Empire and its few remaining allies, but later including America, open another front. Despite the war being waged in North Africa and later Italy, the Soviets insisted that this was not enough and that another front was required. Finally, in late 1943, the British and Americans agreed that the Western Allies would open a second major front in France to split and encircle Germany’s forces. It was at this point that Operation Overlord was conceived: with one of the most massive mobilizations and concentrations of manpower to be sent in an amphibious landing.

The Details of D-Day

Even though the actual operation had only been planned in the closing months of 1943, a major amphibious invasion of Europe had been in the works for some time. As far back as 1942, the Allies had been working with naval landings in Africa and elsewhere.

One of the major stepping stones in the tactical evolution was known as the Dieppe Raid, an attempt by Commonwealth forces, namely Canadians, in August of 1942 to temporarily seize the port city of Dieppe in northern France. Despite outnumbering the German defenders by a great deal, the Allies’ inexperience in landing operations became evident, and the entire operation resulted in a costly defeat. Over half of the landing force was either killed, wounded, or captured, and virtually none of the objectives had been claimed.

Although the landing ended in failure, a great amount of operational information had been gained, essentially providing a “what not to do” playbook for all future landings. One of the more important lessons was that attacks on heavily-defended port cities were unfeasible at best. This would ultimately decide the final location of the D-day landings and result in the Allies constructing massive, hastily-built temporary ports in the wake of the landings.

By the summer of 1944, the Allies were well experienced with naval landings across North Africa, Italy, and the Pacific, which could all be applied to Operation Overlord. Most importantly, a significant amount of preparation and intelligence work went into the landings. It was almost impossible to hide the massing of troops across England from the Germans. However, ever the masters of deception warfare, the British were able to mislead the Germans as to where precisely the invasion would take place. Countless possible locations for the landing were leaked and prepared across Europe in a broad string of deception operations known collectively as Operation Bodyguard. In addition, leading up to the invasion itself, several radar installations along the French coast were destroyed, further blinding the German defenders to the exact nature of the upcoming assault.

The Germans were not idle either. As early as 1942, Hitler had become acutely aware of the possibility of naval incursions into Europe after several raids along the coast, including Dieppe. As a result, a massive chain of fortifications and garrisons were established, intending to create a mighty Atlantic Wall from the border of Spain all the way to the northern tip of Norway. Millions of mines were placed, and tens of thousands of bunkers were built and garrisoned by hundreds of thousands of soldiers, with even more conscripted civilians being used as forced laborers.

Initially, the creation had been slow and sporadic, but the appointment of the fabled General Field Marshal Erwin Rommel, “The Desert Fox” of the African campaigns, would change the dynamic of command. There was a good deal of disagreement within the German high command on how best to respond to an invasion of mainland Europe, and Hitler, who had been at odds with the more experienced Rommel, had seen fit to keep him mainly as a figurehead, rather than giving him an actual command in France or elsewhere.

Even the well-regarded Field Marshal known for his cunning found himself duped by the Allies. Rommel, along with much of the rest of the German Command, firmly believed that the landings would occur at Calais. Despite this, a huge amount of effort and organization was put into securing the fortifications along the Atlantic Wall, even as more troops and valuable war material were shifted to the Eastern Front, where the war with the Soviets was reaching an ever more desperate and bloody struggle.

Because of this, many sections of the wall were left understaffed by what would be considered “second-rate” troops, comprised of older individuals, enlisted POWs, and expats from the East. This was compounded by the command structure, which left command of the critically important and valuable German panzer-divisions split between three individuals: Rommel, Leo Geyr von Schweppenburg, and Hitler himself.

Rommel believed that an invasion must be fought off close to the beaches to mitigate the Allied air superiority he had witnessed in North Africa. In contrast, Geyr von Schweppenburg and other members of the German high command believed that allowing the Allies to land and advance deeper into France and thus out of the range of their naval support would allow for better results with their tank divisions. This lack of coordination and Hitler’s insistence on involving himself would ultimately decide the German response on June 6th, 1944.

While the term “D-day” in the military simply refers to the day on which an operation or attack is to take place, it would become synonymous with the Normandy landings on the morning of the 6th of June, 1944 and is often remembered even now as “The day of days.”

It was originally believed that weather conditions would stall the invasion for some weeks. Even some of the German high command, including Rommel himself, would initially be away from northern France, thinking that the weather would not be calm enough for a landing. Despite this, Allied meteorologists were able to better predict the weather due to complete control over the Atlantic and expected that conditions would be acceptable for the 6th of June.

The first wave over the English Channel would, in fact, not be from the sea but the air, as tens of thousands of paratroopers were deployed throughout the Norman countryside in order to secure critical infrastructure and points ahead of the invasion itself. By dawn, almost 7,000 vessels had made the journey from England and spread out to land some 150,000 soldiers across the coastline of Normandy.

The major landings were concentrated on five beachheads. Utah and Omaha, the two western-most beaches, were to be stormed by the Americans. Further east was Gold and Juno, assigned to the British and Canadians, respectively. Finally, the eastern-most beach was Sword, assaulted by combined British and free French forces.

Many lessons had been learned from the failure at Dieppe, and excessive preparation had been taken to avoid a repeat. One of the developments was a specialist type of amphibious tank, known as a DD (Duplex Drive) tank, which could propel itself through the water using a waterproof skirt and propellers connected to the main drive. While innovative, these tanks were difficult to operate and not terribly buoyant. This was worsened by the fact that the height of the waves on D-day in some parts of the landings was about six times that for which the DD tanks had previously been tested.

Despite the obstacles, the Allied forces and their new amphibious armor were able to reach the beaches, with the exception of Omaha, where not a single tank was able to make the crossing. Even as the invasion came fully underway, the German high command could not believe this was anything more than a diversion for the real invasion at Pas-de-Calais.

Worse still for the German defenders was the fact that four out of their ten reserve tank regiments required Hitler’s personal permission to deploy, and when the landings occurred at roughly 6 am, Hitler was still asleep. The fear of angering Hitler, as is often the case in despotic hierarchies, meant that he was left to rise on his own, some four hours after the initial invasion, before being made aware of what was happening, meaning that some of his most key reserves were unable to act.

Despite the success of the landings across all the beaches, the Allies found their progress significantly slowed, with none of the desired day-one objectives achieved in the face of fierce resistance and bad weather. At this point, the second phase of the Battle of Normandy began as Allied troops attempted to press inwards toward Caen and break out of the beachhead they had created.