HomeStoriesMyths and Misconceptions About the Soviets in World War II

The Red Army and its actions are the subject of much historical debate. Here are some of the biggest misconceptions and the realities behind them. 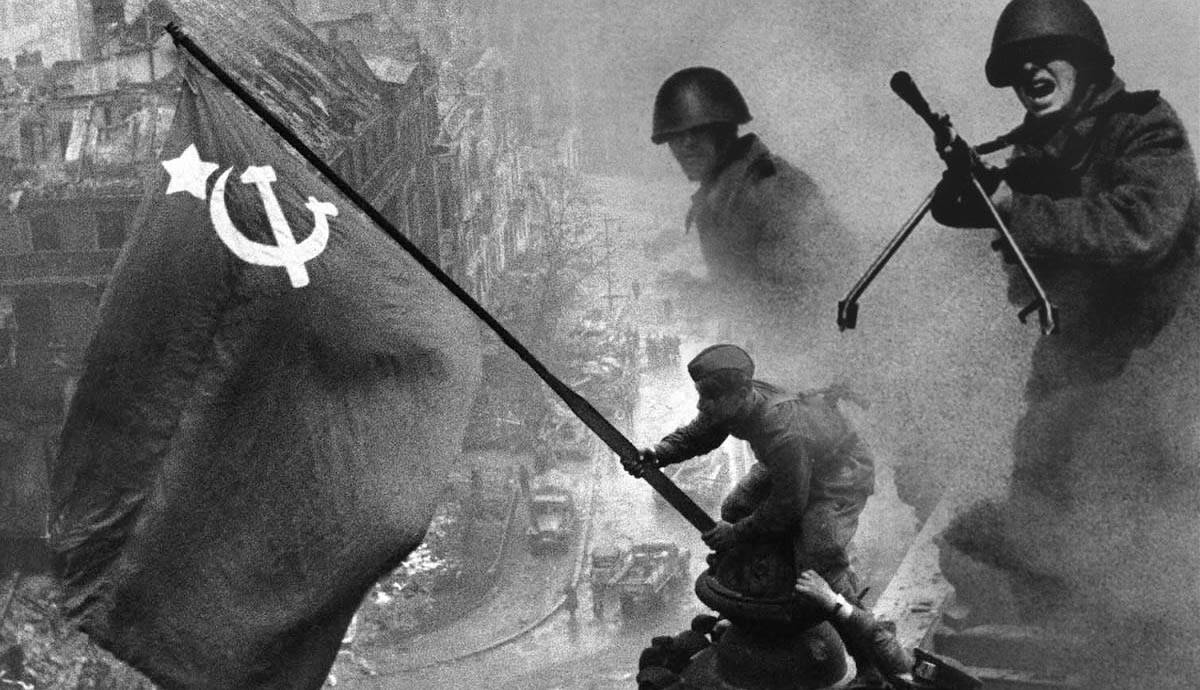 There are many common ideas about the actions of the Soviets and the Soviet Union during World War II that stem from fallacies, lies, and a predominant misunderstanding of the contexts involved. Uninformed stereotypes have created views on Soviet history and Red Army practices during World War II that are largely unfair. The following are some of the myths, stereotypes, and other factors that deserve attention and redress.

The Role of the Media in the Soviet Union

In its quest to create good entertainment, it is common for media to be a little creative with the truth. “Western” media is certainly no exception, and Hollywood has been the biggest perpetrator. Not satisfied with engaging poetic license and exaggerating events, it has seen fit to create complete myths, especially when it comes to events during World War II.

A prime example of this is the movie U-571, which portrays a German submarine and American submariners in a plot to capture the Enigma machine. While it was stated to be a work of fiction, it was clearly an American adaptation of something the British did. Changing the nationality of the protagonists drew much ire, even from the then Prime Minister Tony Blair, who agreed that the movie was an “affront” to British sailors.

While this movie stands as a good example of Hollywood rewriting history, it must be considered that it is only one example of many. Being an English-language-medium industry, much of the media produced by Hollywood (and other western media) are not consumed by Germans or Russians – people that are often the subjects of its myth-creating entertainment.

The origin of myths aside, what is important is that these myths not only exist but persist in the minds of the general English-speaking populace. Undoubtedly, Soviet history has been the subject of a vast quantity of myths and misconceptions. Seen as an ally only out of necessity during World War II, then going on to be the main enemy during the Cold War, to the present day where Russians (guilty or not) are subject to much negative interrogation in US media, there has hardly been any will to correct stereotypes that cast the Soviets (and the Russians) in a negative light.

The following are some of the myths and misconceptions surrounding the Soviets and their practices during World War II.

Shooting Their Own Retreating Troops

Troops that are employed to block their own comrades from retreating are called “blocking” or “barrier” troops and have been employed by several countries. These units existed, but they did not operate the way they are portrayed in Hollywood. Enemy at the Gates (2001) shows Red Army commissars gunning down retreating Soviet soldiers with heavy machine guns at Stalingrad. This is an inaccurate depiction, giving rise to a stereotype that simplifies a more nuanced situation.

After the massive losses and disintegration of Soviet armies during the initial stages of the German invasion of Russia, barrier troops were introduced in large numbers. This was detailed by Stalin’s Order 227, also known as “Not One Step Backwards!” Barrier troops accompanied each division, were drawn from the division’s ranks, and put under the command of the NKVD (the interior ministry of the Soviet Union).

During the first year of the war, morale in the Red Army was extremely low. It was widely expected in the Soviet Union as well as in the rest of the world that Germany would easily succeed in forcing the Soviet Union to capitulate. As a result, retreat, desertion, and panic were rife. Without order, the Soviet troops were being annihilated by the Germans. German successes were decisive and overwhelming in the first few months of the invasion, and over two million Soviet soldiers were captured. By the end of Operation Barbarossa on December 5, the Soviets had suffered almost 5 million soldiers captured, wounded, killed, or MIA. By comparison, the Germans suffered just over 1 million casualties.

Order 227 came in July 1942 and received mixed support from Soviet soldiers, as it was a requirement to create cohesion and give them a chance to defeat the Germans. Still, it also was seen as a waste of manpower, diverting troops from the frontline where they would be of more use.

These barrier troops operated by apprehending retreating troops and sending them back to the frontline. When this was not possible, retreating troops were detained to await trial. Although they had orders which allowed them to shoot deserters and “cowards” on the spot, and while this most certainly did happen, it was not the norm. Of those detained and found guilty (around 900,000), roughly 422,000 were sent to penal battalions where they would continue the fight against the Germans by performing the most dangerous jobs. This number accounted for around 1.5% of those who would serve in the Red Army during World War II. Another 436,000 were imprisoned.

An example of these ratios can be found in an internal list from the NKVD regarding the Battle of Stalingrad from 1 August 1942 to 15 October 1942. According to the list, 15,649 soldiers were picked up by barrier troops. Of these, 244 were imprisoned, 278 were shot, 218 were sent to penal units, and 14,833 soldiers were returned to their units.

After the Battle of Stalingrad, Soviet morale improved significantly, and the need for barrier troops diminished. By 1944, barrier troops were disbanded, as the Soviet Union’s fortunes changed and the tide of war had swung heavily against the Germans.

The “human wave” belief is part of a wider idea that Soviet tactics were unsophisticated and relied on brute force and numerical superiority to overwhelm the enemy. It also relies on the myth that the Soviets had an unlimited pool of manpower. This is simply not true in both cases.

The idea of the “human wave” tactic is extremely complicated, and it is not fully understood by the average layperson. Like the German Blitzkrieg, the Soviets had their own battle doctrine called “Deep Battle,” which emphasized a combination and coordination of strategic, operational, and tactical levels. The basic idea was to use frontal assaults to penetrate the enemy line and destroy the enemy’s logistical capabilities. It is noteworthy that frontal assaults were not a unique feature of the Red Army. Virtually all participants in the war employed them.

However, at the time, the Soviets lacked the technical superiority of the Germans. In many cases, they were dogged by poor training amongst the infantry and an acute shortage of a competent pool of officers. This meant that the Red Army was unable to coordinate at a tactical level. This led to poor decisions and a high loss of life in ordering badly planned and poorly-timed assaults. From a German soldier’s perspective, this would have simply looked like unsophisticated “human wave” assaults, with soldiers throwing themselves into a meat-grinder.

As for the belief in unlimited manpower, by 1943, the Red Army was suffering from acute manpower shortages. This was due to strategic blunders early in the war, especially in 1941 when Germany launched Operation Barbarossa, by far the biggest operation of World War II. The Germans actually outnumbered the Red Army on the front line, and within a few short months, the Germans had captured over 2.5 million Soviet soldiers and killed half a million. Meanwhile, over a million Soviet soldiers were sick or wounded. This was just between 22 June and 5 December 1941. This factor led to a desperate need to train soldiers as quickly as possible and therefore led to the failure of the Soviet Union’s Deep Battle doctrine.

While the Soviets managed to refine the implementation of their strategy to the point where it was effective, the lack of manpower did continue to be an issue.

This is another Hollywood trope that would have us believe that the Soviets, because of a lack of small arms, would send two soldiers into battle, with only one of them being armed. When the gun-carrying soldier was killed, it was the duty of the other soldier to pick up the weapon and continue fighting.

After the disasters suffered by the end of 1941, the Soviets were actually suffering from manpower shortages, while there were plenty of small arms. Were the “two men one gun” theory correct, it simply wouldn’t make any sense. There may have been extenuating circumstances that caused it to happen in a few cases, but it assuredly was not the norm. As is possible with the case of “human wave” tactics, Axis soldiers misinterpreted what they saw. Operating heavy machine guns required a crew of two or even more. It is quite common to see support soldiers for these weapons running into position without carrying a rifle. Naturally, it fit the German viewpoint that the Soviets were not only unsophisticated but so badly supplied they didn’t even have guns.

This idea would have been reinforced because at the outset of Operation Barbarossa, the Soviets were unprepared, and many of the frontlines were manned by NKVD troops armed only with pistols. In the fog of war, it is easy to assume these soldiers were completely unarmed.

Lend-Lease Was the Deciding Factor

There is no doubt whatsoever that the US Lend-Lease program helped the Soviet Union take Berlin and end World War II with German defeat. However, if one looks at the data, it becomes apparent that it was not the deciding factor for saving the Soviet Union from the German invasion. There is much academic support for the fact that the Soviets would have defeated Germany even without Lend-Lease.

From 1941 to 1945, total lend-lease aid to the Soviet Union accounted for only 5% of the Soviet GDP in total. And it is a salient point that over 80% of the aid was received after June 1942, when the tide of the war had already turned against the Germans on the Eastern Front. The Soviets had already won the critical battles of Moscow, Stalingrad, and Kursk. Germany was already losing the war when Lend-Lease to the Soviet Union had any significant effect, and that effect was minuscule compared with Soviet production at the time. By the time the first Sherman laid its tracks on Soviet soil, the writing was already very much on the wall for the Third Reich.

Although Stalin, Khrushchev, and other Soviet politicians were very complimentary about the Lend-Lease program helping them win the war, the statistics tell a very different story. The noted historian David M. Glantz points out in this regard,

“Lend-Lease aid did not arrive in sufficient quantities to make the difference between defeat and victory in 1941–1942; that achievement must be attributed solely to the Soviet people and to the iron nerve of Stalin, Zhukov, Shaposhnikov, Vasilevsky, and their subordinates….”

He further states that without Lend-Lease, the Soviets still would have won, but the war would have taken 12 to 18 months longer.

Hitler grossly underestimated the Soviet Union and misunderstood the resolve of its inhabitants. Despite reaching Berlin and tearing down the Nazi seat of power, the Soviets are still misunderstood today by the descendants of their allies. Many of the stereotypes of how the Soviets fought were noted by Germans, and these same stereotypes are present in the minds of many people throughout countries in the west.

The Ruthless Assassins of History: From Brutus to ISIS-K