Every sword has a story. Learn about the history behind these legendary swords that feature in our collective myths. 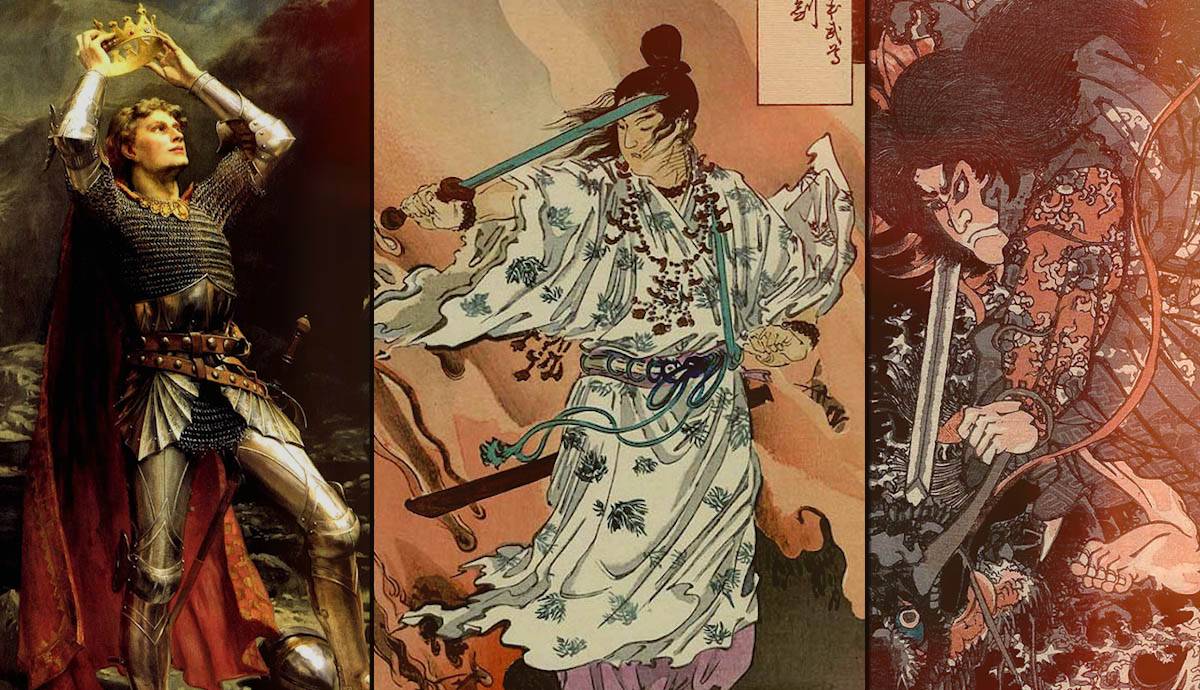 King Arthur. Sigurd. Susano-o. Roland. The Prophet Muhammad. According to myth all of these figures bore legendary swords with which they performed deeds of heroism.

Virtually every culture has tales of heroes and gods that have done battle with insurmountable foes — and they each had a suitable weapon. Here is a collection of some of the most notable swords from mythology and legend, from Excalibur to the Zulfiqar.

1. Excalibur: The Most Famous Legendary Sword

Arthur Pendragon, ruler of the Britons, was said to have drawn this legendary sword from a stone and anvil when no one else could — at least in most tellings of the legend. Geoffrey of Monmouth’s work is the most well-known source from which modern retellings of the Arthurian tales stem. Other versions of the story portray Excalibur as a gift from the Lady of the Lake and the sword in the stone as another weapon entirely.

Under the guidance of Merlin and with the power of Excalibur, Arthur united Britain against the Anglo-Saxon invaders and assembled a group of knights to help him govern. His knights — Lancelot, Perceval, Gawain, Galahad — were supposedly exemplars of chivalric ideals.

Arthur was said to have fought his nephew Mordred at the Battle of Camlann and suffered a mortal wound. Sir Bedivere took Excalibur and returned it to the Lady of the Lake, and Arthur was bound to the island of Avalon, where according to legend he rests until the hour of Britain’s greatest need.

Excalibur is often portrayed as a longsword. However, during the 6th century when King Arthur supposedly lived (the earliest sources date to this period), it is more than likely he would have had a short blade, similar to a Roman gladius.

2. Gramr: The Sword From the Volsunga Saga

The Volsunga Saga of Icelandic lore tells of a warrior named Sigmund. At his sister Signy’s wedding, Odin appeared as he was wont to do and thrust a sword, Gramr, into a tree. He declared that anyone who could remove the blade would find no better weapon in all his days. All the guests tried and failed to remove the sword, all save Sigmund. The king wished for the sword, but Sigmund refused to part with it because it was a gift from Odin.

Sigmund used the sword in several battles until it was broken in two. Signy kept the two pieces of the legendary sword and passed them down to her son Sigurd, who became a renowned figure in his own right. A dwarven smith/warrior named Regin came to stay with Sigurd to train him. During this time, Regin told Sigurd about the dragon Fafnir and asked him to slay the dragon to retrieve its treasure. Anyone familiar with Tolkien’s work will see where the inspiration for The Hobbit came from (although of course Bilbo was not asked to kill Smaug). Sigurd found Fafnir and slew him with a single thrust.

There are other stories about Gramr, but this is the most well-known one. Gramr has been depicted in many ways. In contemporary media, it is usually depicted as a greatsword, but if it has any historical basis it would have been a shorter seax-like weapon, or a single-handed straight sword.

3. Zulfiqar: A Gift to the Prophet Muhammad

This legendary sword, given to the Prophet Muhammad by the Archangel Gabriel, passed to Ali ibn-Abi Tahib, the Prophet’s first cousin/successor according to Shia Islam. Ali had struck both the helmet and shield of Talhah ibn Abi Talhah al-Abdari, the best warrior from Mecca during the Battle of Uhud, breaking his own weapon in the process. As a result, he was given Zulfiqar. The sword is said to have similar powers to Excalibur (extra strength, an extraordinarily sharp edge, and divine light), though only when wielded by a devout Muslim warrior, and in fact, it was given to the Prophet as a weapon to defend the Islamic faithful.

Some mountain passes bear the name Zulfiqar because the Prophet Muhammad is said to have used the sword to carve them. The saying “lā sayfa ʾillā Ḏū l-Faqāri wa-lā fatā ʾillā ʿAlīy” (There is no sword but the Zulfiqar, and there is no hero but Ali), an invocation from the Prophet, often appears on talismans, in praise of both the legendary sword and Ali himself. The weapon is depicted on many flags and insignia as a scissor-like blade, but a more plausible variant is a simple scimitar that has its tip split into two pieces.

4. Durendal: The Sword of Roland

This legendary sword features prominently in the stories of the legendary warrior Roland. This military general was in service of the Frankish/Lombard ruler Charlemagne (r. 768 – 814 CE) His most notable excursion was the Battle of Roncevaux Pass in 778.

After a failed invasion of the Iberian Peninsula, Roland held the rear, allowing the Frankish forces to retreat through the pass. Roland was equipped with Durendal, a blade infused with — according to The Song of Roland — several sacred Christian relics: a tooth of Saint Peter, a tassel from the shroud of Mary, and the hair of Saint Denis. This legendary sword was said to have the power to cut through solid rock, similar to the Zulfiqar. Roland carried this blade along with his signaling-horn Oliphaunt. Astute Tolkien readers might see the inspiration for Boromir.

5. Harpe: The Sword That Killed Medusa

This Greek weapon had several wielders: Kronos, Zeus, and Perseus. It was a short, curved blade with a sickle-like protrusion, originally used by Kronos to kill his father Ouranos for his cruelty, at the behest of Gaea.

The same thing would happen to the next generation of Gods: Kronos ate all of his children, except the youngest one, Zeus. Zeus’ mother Rhea birthed him in secret and placed a stone in swaddling cloth. Kronos ate the stone and, in some versions of the story, Zeus used the Harpe to cut open Kronos’ stomach and release his five siblings, who became the Olympian deities. Kronos and the other Titans, meanwhile, were cast down to Tartaros.

Later, Zeus’ son Perseus took Harpe and, after tracking down the Gorgon Medusa, decapitated the monster with this legendary sword made of adamantine/diamond. Some sculptures depicted Harpe as a straight sword with a sickle-like protrusion, but others have made it resemble an Egyptian khopesh.

6. Ame-no-Habakiri: Sword of the Storm God

This sword was used by the Shinto kami of storms, Susano-o, when killing the serpent Yamata-no-Orochi. The most common variant of the story appears in the Kojiki (Record of Ancient Matters). Susano-o was always envious of his elder sister, the sun goddess Amaterasu. In a fit of pique one day, he flayed a horse and threw its body into a weaving loom before excreting on the floor of the palace. He was exiled for this act and found himself in Izumo province.

During the storm god’s wanderings, he came across a couple grieving the impending abduction of their daughter Kushinada-hime. Their other seven daughters had already been taken and devoured. The culprit was none other than the eight-headed serpent Yamata-no-Orochi, who took yearly sacrifices. Susano-o, seeking to redeem himself, agreed to kill the creature. He instructed the couple to make eight barrels of the strongest sake possible and place them on raised platforms with eight gates around them. The serpent came and drank the sake, and while it was distracted and trapped by the eight gates, Susano-o severed all the monster’s heads and tails.

In one of these stories, another sword was embedded: the Ame-no-Murakumo (Cloud Cluster Sword). Susano-o gave this sword to Amaterasu in reconciliation. Later, it was renamed the Kusanagi-no-Tsurugi, which we’ll discuss momentarily.

This legendary sword is part of the three imperial regalia of Japan, along with the Yata-no-Kagami (mirror) and the Yasakani-no-Magatama (jewel). As discussed above, this sword was a gift from Susano-o to Amaterasu. She passed it, along with the sacred mirror and jewel, to her grandson Ninigi-no-Mikoto.

The sword (at this time still referred to as Ame-no-Murakumo) was given to a warrior named Yamato Takeru. As the story goes, Takeru was on a hunt, and a rival warlord saw an opportunity to kill him by setting fire to the tall grass and preventing his escape.

But Ame-no-Murakumo gave its wielder the power to control the wind, as Takeru found out when he attempted to cut the grass to remove the fuel. With deft swings, he sent gusts of wind to push the fire away from him and back toward his enemy. In commemoration of this feat, he named the legendary sword Kusanagi-no-Tsurugi, or “Grass Cutter”.

Both the Kusanagi-no-Tsurugi and the Ame-no-Habakiri are known in Japanese myth to resemble tsurugi or ken, an early straight-bladed double-edged sword, rather than the more distinctive tachi or katana. Modern media often depicts these weapons so that they more obviously resemble Japanese designs.

8. Asi: The Legendary Sword of Rudra

Unlike most of the other swords we’ve discussed here, Asi is purely from the realm of myth. Its story is detailed in the Shanti Parva of the Mahabharata from ancient India. Before humanity was created, the universe was in chaos — a common theme in many ancient myths. The gods, or deva, were in a struggle against the demons, or asura.

The deva were doing rather poorly, so they turned to the supreme deity Brahma for help. He performed sacrifices to create the ultimate, primordial weapon, manifested in the form of a razor-toothed beast that glowed brighter than any object in the sky. The creature then transformed into the sword Asi.

Rudra, the god of storms and one of the avatars of Shiva, took up this sword and singlehandedly routed the army of the asura and reasserted his rule over the world so that humans could exist in peace. The world was first cleansed in a flood, then the sword Asi was passed down to the hands of Manu, a figure analogous to Noah.