French novelist Marcel Proust identifies one important source of the meaning of life. Find out how Monet’s water lilies are linked to the author’s “search of lost time” and his enlightening Proustian moments.

May 16, 2020 • By Marie-Joelle Eschmann, Sotheby’s Institute of Art Certificate 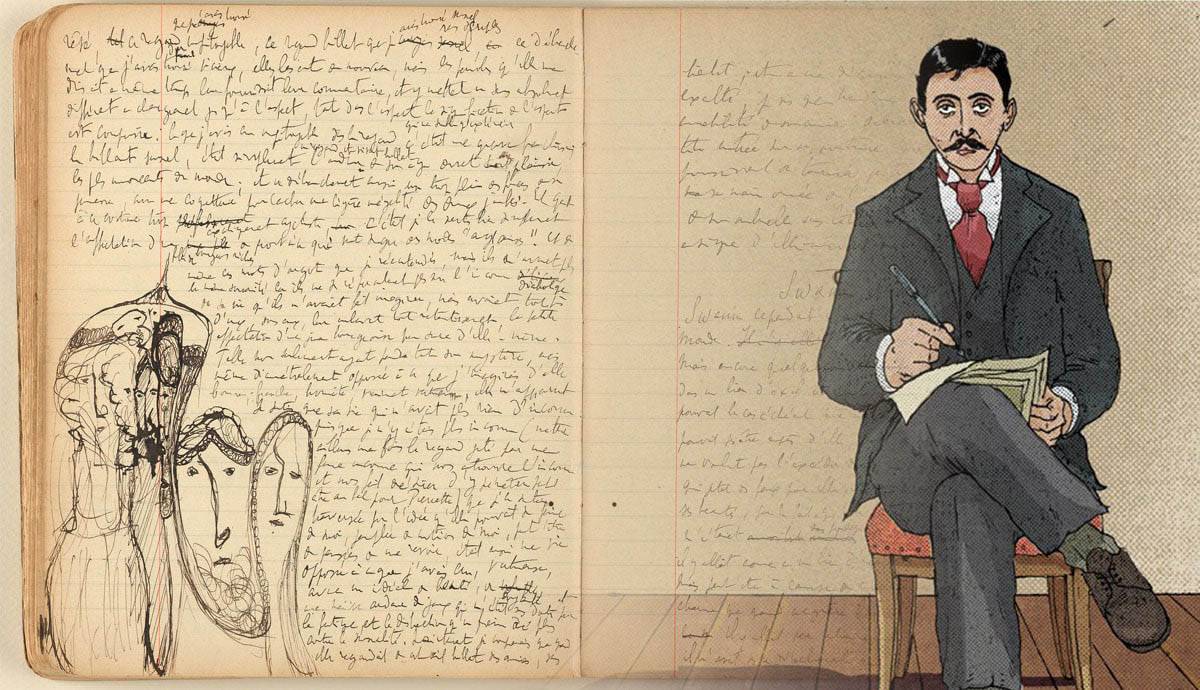 If you think that Leo Tolstoy’s novel “War and Peace” is long, then it is about time to recall Marcel Proust’s “In Search of Lost Time.” It is a novel written in seven parts and published in French as “À la recherche du temps perdu” from 1913 to 1927. “In Search of Lost Time”  is one of the longest novels in the world, counting more than 1.2 million words – thus, double those in “War and Peace”.

The novel’s most famous scene is about herbal tea and some dainty little cakes the French call “madeleines”. In the novel’s first volume, “Swann’s Way”, the narrator named Marcel, a thinly disguised version of Proust himself, tells us that he’d been feeling depressed and sad for a long while…

“[…] when one day in winter”, to quote from the novel, “as I came home, my mother, seeing that I was cold, offered me some tea, a thing I did not ordinarily take. I declined at first, and then, for no particular reason, changed my mind.

She sent out for one of those short, plump little cakes called ‘petites madeleines,’ which look as though they had been moulded in the fluted scallop of a pilgrim’s shell. And soon, mechanically, weary after a dull day with the prospect of a depressing morrow, I raised to my lips a spoonful of the tea in which I had soaked a morsel of the cake.

No sooner had the warm liquid, and the crumbs with it, touched my palate, a shudder ran through my whole body, and I stopped, intent upon the extraordinary changes that were taking place. An exquisite pleasure had invaded my senses, but individual, detached, with no suggestion of its origin. And at once the vicissitudes of life had become indifferent to me, its disasters innocuous, its brevity illusory–this new sensation having had on me the effect which love has of filling me with a precious essence; or rather this essence was not in me, it was myself.

I had ceased now to feel mediocre, accidental, mortal. Whence could it have come to me, this all-powerful joy? I was conscious that it was connected with the taste of tea and cake, but that it infinitely transcended those savours, could not, indeed, be of the same nature as theirs. Whence did it come? What did it signify? How could I seize upon and define it?” (source: art.arts.usf.edu)

This moment with tea and madeleines is pivotal in the novel because it demonstrates everything Proust wants to teach us about appreciating life with greater intensity. But what exactly does this lesson consist of?

In Search Of The Lost Meaning Of Life

In the scene above, Proust’s narrator experiences what we now call a “Proustian moment.” It is a moment of sudden involuntary and intense remembering. The taste of tea and madeleines carries him back to happier years in his childhood when, as a small boy, he spent his summers in his aunt’s house in the French countryside. Through its rich evocative power, what the Proustian moment teaches us is that life isn’t necessarily dull and meaningless. We just have to look at the simple things in life differently and learn to appreciate them again.

But before digging deeper, let’s take a step back in order to get a brief understanding of Proust’s colossal masterpiece and his underlying intentions.

Deeper Into The Story

The book tells the story of a middle-aged man in his ongoing search for the meaning and purpose of life. The tea-and-madeleine moment unleashes the narrator’s memories of his happy childhood which fills him with hope and gratitude.

Marcel then starts to tell the story of his life, introducing along the way a series of memorable characters, among them Charles Swann of the aristocratic Guermantes family. And of course Albertine, with whom Marcel forms a passionate attachment. Throughout the novel, Marcel’s world expands to encompass both the cultivated and the corrupt, and he sees the full range of human folly and misery.

At his lowest point, he feels that time is lost and that beauty and meaning have faded from all he ever pursued. However, the narrator realizes through a series of incidents of unconscious memory that all the beauty he has experienced in the past is eternally alive. Time is then regained, and he sets to work, racing against death, to write the very novel the reader has just experienced.

Proust, in his own quest for time lost, invented nothing but altered everything. He selected, fused, and transmuted the facts so that their underlying unity and universal significance would still be revealed. Proust’s novel thus charts the narrator’s systematic exploration of the aforementioned universal significance as three possible sources of the meaning of life.

Three Sources To The Meaning Of Life

The first is social success. For years, the novel’s narrator devotes his energies to working his way up the social hierarchy. However, Marcel someday tires of the social snobbery. He has to admit that most conversations are boring and realizes that virtues and vices are scattered throughout the population without regard to their social status. He comes to understanding that it is a natural error, especially when one is young, to suspect that there might be a class of superior people somewhere out there. But Proust’s novel offers us definitive reassurance that there is no better life going on elsewhere.

Another possible source is love. In the second volume of the novel, “Within a Budding Grove”, the narrator spends his holidays at the seaside with his grandmother. There, he develops a crush on a girl called Albertine.

For about 300 pages, all the narrator can think about is her. But with time Marcel gets disappointed again. The ultimate promise of love, in Proust’s eyes, is that we can stop being alone and fuse our life with that of another person. But the novel comes to the conclusion that no one can ever fully understand anyone, and that loneliness is endemic.

This brings us to the third and only successful possible source for the meaning of life, which is art. For Proust, the great artists deserve acclaim because they show us the world in a way that is fresh and alive. The opposite of art for Proust is something he calls habit. For Proust, habit has ruined for us much of life by dulling our senses. The trick, in Proust’s eyes, is to recover the powers of appreciation of a child in adulthood. We have to strip the veil of habit in order to appreciate daily life with a new sensitivity. This, for Proust, is what artists do.

Art As A Proustian Moment

When Monet shows us water lilies in a new light, van Gogh reveals dreamy starry nights, or Christo wraps up buildings such as the Reichstag in Berlin, what they basically do is to strip habit away and return life to its true glory. Proust’s message, however, isn’t that we should become artists ourselves or visit museums and galleries all the time.

The idea is to learn from artists and therefore regain a new perspective on our own world. Take Picasso’s famous sentence “Quand je travaille, ça me repose” as an example: the Spanish artist basically claims that working for him is resting. Who would be able to claim such a thing nowadays? For Proust, that’s why artists are so important: because they seem to hold the key to finding meaning in life. Their artworks, you could even say, are like long Proustian moments.

It is no coincidence that Proust’s favorite painter was Vermeer, a painter who knew how to bring out the charm and the value of the everyday. The Dutch artist was committed to reconcile us to the ordinary circumstances of life, just like Proust did, and thus, you can feel Vermeer’s spirit hanging over “In Search of Lost Time.”

Who was Marcel Proust?

The novel is, to some extent, the story of Proust’s own life, told as an allegorical search for truth. Therefore it is important to have a glimpse at the novelist’s biography.

Proust was born into an upper middle-class French family in 1871. His father, being an important doctor of his age, was responsible for wiping out cholera in France. As a small boy, Proust would spend his vacations close to Chartres (which would later become Combray in his novel) or at the French seaside, where he would stay with his grandmother.

Later in life, as a young adult, he would gain access to high society and to exclusive salons and as a sharp observer of the bourgeoisie, he started to write articles for the French newspaper Le Figaro. This might have served as a template for the aristocratic Guermantes family he later created for his novel. Furthermore, it is believed that Proust’s fascination for art rooted in an encounter with art enthusiast John Ruskin. Proust worked on a translation of Ruskin’s “The Bible of Amiens”.

After Proust’s parents had died, he fell into a severe depression. He had himself sent to a sanatorium in Boulogne-Billancourt in 1905. There, he was treated by Paul Sollier who successfully induced “involuntary memories” as a therapy method. After finishing his retreat, Proust moved to the Boulevard Haussmann in Paris and there, started to work on his novel.

Marcel Proust wanted his book to help us above all. Towards the end of his life, he told his housekeeper Celeste: “If only I could do to humanity as much good with my books as my father did with his work.”

Publishing In Search Of Lost Time

Although “In Search Of Lost Time” is ranked by many as the greatest novel of the 20th century, its first volume was refused on several occasions. According to the Encyclopedia Britannica, it was finally issued at the author’s own expense in 1913. Over time, he revised his novel, enriching and deepening its feeling, texture and construction. In doing so, he transformed “The Ways of Swann” into one of the most profound achievements of human imagination, reaching genius level descriptions of people and places – and creating one of the most legendary scenes in the whole history of literature with the depiction of tea and cake.

Finally, in 1919, his second volume “Within a Budding Grove” was published, among a reprint of “Swann”. He then received the prestigious Prix Goncourt, and Proust suddenly became world famous. Two more installments appeared in his lifetime and had the benefit of his final revision: “The Guermantes Way” and “Cities of the Plain”, or “Sodom and Gomorrah”. The last three volumes were published posthumously. The first authoritative edition of the entire work was published in 1954.

By Marie-Joelle EschmannSotheby’s Institute of Art CertificateMarie-Joëlle works as a communication specialist and contributing writer. Originally from Switzerland, she is currently living in Istanbul from where she travels to ancient historical sites such as Ephesos in Turkey or Persepolis in Iran. She has a deep interest in art and art history and holds a certificate from the Sotheby’s Institute of Art.