HomeArtistsMasaccio (& The Italian Renaissance): 10 Things You Should Know

Founder of the Early Renaissance and master of perspective, Masaccio was one of Florence’s most important artists. Read on to find out about his tragically short life and immortal legacy. 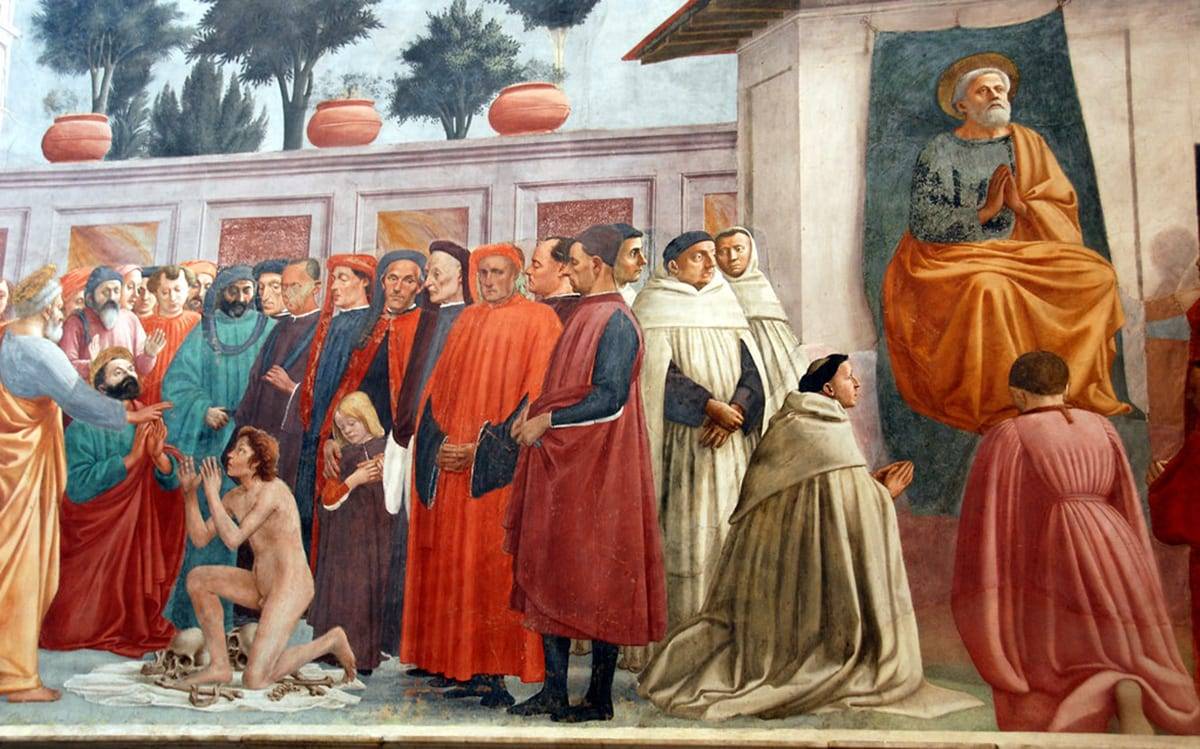 The paintings of Masaccio define the artwork of the Early Renaissance. His accomplishments are largely preserved on the walls of churches, exhibiting the revolutionary style and refined understanding of perspective that would go on to inspire countless other Florentine artists and kickstart this new period in the history of art.

10. Masaccio Was Born At A Time Of Great Artistic Development

Born in Arezzo in 1401, Tommaso di Ser Giovanni di Simone would undoubtedly have felt the cultural, political and artistic shockwaves that emanated out of Florence during his youth. Across the previous century, the city had produced some of the hallmarks of the Italian Renaissance, from the Medici Bank to Dante’s Divine Comedy.

Although there is no evidence of any artists in his family, Tommaso’s father seems to have held some official position and, as a result, it is likely that the young man received the thorough education expected of boys of certain social status. This generally included the study of literature and the arts, as well as mathematics and history.

9. There Is Little Evidence Of His Early Years

Although the events of the young Tomasso’s formative years remain largely uncertain, art historians and critics have speculated about a range of possible teachers. At this time, it was typical for established artists to take on aspiring painters as apprentices. For a period of between one and five years, the apprentice would study various forms and techniques under the eye of his master, and may even assist him on large projects.

For this reason, there are clear similarities between the styles of student and teacher, which scholars have often used to plot out the network of relationships between Renaissance artists, suggesting a range of artists from Brunelleschi to Donatello, Piero di Giovanni to Gentile da Fabriano, as Tomasso’s teacher. Following this mysterious apprenticeship, at only 21 years of age, Tomasso established himself as an independent master in Florence.

8. He Completed Impressive Projects While Still A Young Man

One of the earliest works attributed to Tomasso as an independent artist is the San Giovenale altarpiece, found in a church near his hometown. The triptych is particularly notable for its depth; the painter has used his understanding of proportion and perspective to give the figures a three-dimensional appearance. The rich materials and bold red pigment suggest that from the very start of his career, Tomasso received funding from some, particularly wealthy and prestigious patrons.

7. Masaccio Collaborated With Another Important Artist

Another of Tomasso’s early works was a joint endeavor with the painter Tommaso di Cristoforo Fini, with whom he would go on to have a life-long artistic partnership. In fact, it was to distinguish the two Tomassos that the former received the nickname ‘Masaccio’ (‘Clumsy Tom’) and the latter ‘Masolino’ (‘Delicate Tom’).

Although Masolino was the older and more experienced of the two artists, they seem to have divided their projects equally. Nonetheless, there is a clear distinction between their hands: in keeping with their names, Masolino painted more graceful and elegant figures, while Masaccio was responsible for bold, solid forms.

The men continued to collaborate throughout the 1420s, traveling to Rome together in 1423. The following year, Masolino left Italy altogether, sparking rumors of an artistic disagreement between the two partners. He returned, however, and Masaccio went on to work with him several more times over the course of his career.

6. Masaccio Had Other Famous Friends

As a young man in Florence, Masaccio was surrounded by a large number of venerable older artists and talented young painters. Among them were the famous figures of Brunelleschi and Donatello, with whom Masaccio is known to have been acquainted and who had allegedly helped him to establish his relationship with Masolino. Both Masaccio and Donatello worked in Pisa under the patronage of the Brancacci family, and some scholars have suggested that the painter’s fluid approach to the human form and understanding of perspective may have been inspired by the sculptor’s statues.

5. Masaccio Distinguished Himself With His Revolutionary Style

Masaccio approached the human form with an understanding of perspective and proportion that was rare among his contemporaries. He was among the first Italian artists to use the idea of linear perspective and vanishing points to ensure that his scenes and figures appeared life-like and natural. Masaccio’s refined handling of light, pigment, and shading also helped him create realistic images.

Such techniques saw him shift Italian art away from the International Gothic Style that had dominated over the previous centuries, and towards the Classicism of the Renaissance. As a result, Giorgio Vasari credited Masaccio as being the best painter of his generation, praising the way he was able to capture nature in his paintings with his realistic figures and dynamic sense of movement.

4. His New Approach Led To Some Impressive Commissions

In 1424, Masaccio and Masolino were commissioned to paint a series of frescoes to decorate the interior walls of the Brancacci Chapel in Florence, funded by the influential and rich silk-merchant Felice Brancacci. The magnificent paintings, which show Biblical scenes, most notably The Expulsion of Adam and Eve, were actually left unfinished and completed decades later by Filippino Lippi.

3. His Greatest Masterpiece Was One Of His Final Works

The Holy Trinity is one of Masaccio’s most impressive and important works but was also one of his last. The symmetry of the surrounding figures and building draw the eye straight to the crucified Christ, whose ghostly white body stands out vividly in the center of the painting. The architecture of the building behind him serves to frame his suffering, while a skeleton lying below offers a poignant reminder of human mortality.

The artist first sketched the design on the wall with a network of perspective lines, which helped to convey a sense of depth. To ensure that he could continue to use these when working on the plaster, he is said to have driven a nail into the wall at the vanishing point and attached strings that replicated the radiating lines. So powerful is Masaccio’s use of proportion and perspective that scholars have suggested that Brunelleschi, his acquaintance, and a legendary engineer, may have assisted him in the project.

2. Masaccio’s Work Could Not Avoid The Turbulent Politics Of The Day

In Florence, the elite was constantly engaged in complex power games, as notable families competed for influence. The unfathomably wealthy Medici were almost inevitably victorious in these skirmishes, but in 1433 an alliance of other families successfully ousted them from the city. After only a year, however, they returned in triumph and retook their positions at the head of Florentine society.

As bankers, politicians, churchmen and great patrons of the arts, the Medici family ensured that their influence pervaded all areas of life in the city. Their power is evidenced by the fact that Masaccio’s Resurrection of the Son of Theophilus was later vandalized because it showed the figures of the Brancacci family, who were then enemies of the Medici. Such acts serve as a reminder of the interconnectedness of art and politics throughout history.

1. Masaccio Was One Of The Most Influential Figures In The Renaissance

Masaccio died at the tragically young age of 27, but his legacy proved immortal. He had a huge impact on the future of painting throughout Italy, if not Europe. His understanding and use of perspective catalyzed the shift away from the Gothic towards the more natural and realistic style that would come to define Renaissance art. For this reason, Masaccio is often credited as one of the founders of the Early Renaissance, adding to the wealth of prestigious accolades won by 14th and 15th century Florentines.