HomePhilosophyWhat is the Connection Between Maurice Merleau-Ponty and Gestalt?

What is the Connection Between Maurice Merleau-Ponty and Gestalt?

Maurice Merleau-Ponty’s critique of rationalist philosophy draws on Gestalt psychology in its attempt to ground perception in the body. However, Merleau-Ponty feels Gestalt theory does not quite go far enough. 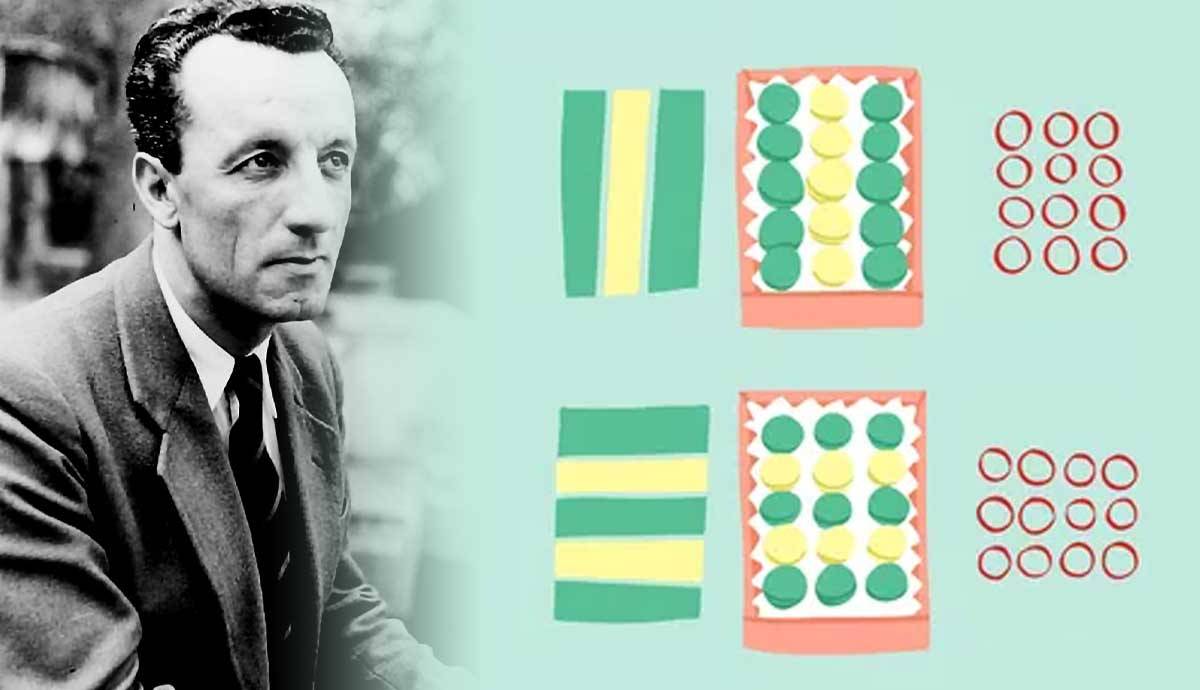 Experience occurs through senses, senses that are bound up – inextricably – in our bodies. The question of how experience relates to the world, whether it accurately represents that which is really ‘out there’, is one of the oldest questions of philosophy and attempts to answer it constitute some of philosophy’s most famous arguments and declarations. Both Plato’s allegory of the cave and Descartes’ cogito are strikingly sceptical about our ability to access the world through our senses. Maurice Merleau-Ponty, a French phenomenologist, attempted to shift the very grounds of this discussion. Rather than pushing back against idealist arguments as many empiricist philosophers had done, by advocating for the trustworthiness of the senses, Merleau-Ponty argues that the ideal of clear, complete perceptual access to the external world simply does not make sense.

Perception and Rationalism in the Philosophy of Merleau-Ponty

Merleau-Ponty’s intention is not merely to say that a sentence like: ‘If we really could see the world objectively, without the mediation of our senses, it might look like this’ is a waste of time because we cannot do so, and therefore don’t know what the world might look like. Merleau-Ponty’s objection is more fundamental, and more structural. It has to do with the ways in which we construct such sentences, the way that such sentences include words like ‘see’ and ‘look’, which tend to fly under the radar.

Merleau-Ponty’s objection is that such sentences are incoherent, and specifically that the implied fantasy – vision without the apparatus and subjectivity of vision – is a nonsensical one, one that is a persistent thorn in philosophy’s side. When we talk about how the world might ‘look’ objectively, we forget our situatedness as beings in bodies, and in the world (Merleau-Ponty’s objection drives constantly against the Cartesian Cogito, and against the reification of ‘objective thought’ it sustains).

More properly, as Taylor Carman is at pains to point out in his book on Merleau-Ponty, we are not beings in bodies but rather we are bodies. By a similar token, Merleau-Ponty draws heavily upon Heidegger’s assertion that being is being in the world. In other words, to somehow abstract ourselves out of our bodies and out of the world is not just an impossible fantasy, it is incoherent: meaningless.

If we are to keep talking about how the world looks, then, Merleau-Ponty’s point is that we ought to keep subjectivity, and all the bodily mediation that comes with it, firmly in the picture. There is, to again borrow the phrasing of Carman’s book, no ‘view from nowhere’. Looking at something always requires a body and a standpoint; that body and standpoint are always important to the process of seeing; and they are always enmeshed in the same world as the thing, or things, they are looking at. (Carman, Merleau-Ponty, 2020)

Merleau-Ponty contends that this essentially flawed kind of thinking, which presupposes imaginative (but actually incoherent) flights from our bodies and the world, is at the root of much of the ‘rationalist’ tradition in Western philosophy. Thus, Merleau-Ponty writes:

“… objective thinking of classical logic and philosophy will have to be questioned, the categories of the world laid aside, the alleged self-evidence of realism placed in doubt, in the Cartesian sense, and a true ‘phenomenological reduction’ undertaken.”
Merleau-Ponty, Phenomenology of Perception (1945)

Taylor Carman offers two other characterizations of Merleau-Ponty’s response to the rationalists’ idea. Both these responses are inversions of the rationalists’ claims: (1) contrary to the rationalist idea that thought is prior to perception (a priority implied directly by the terms a priori and a posteriori), perception is in fact the more basic of the two, and thought is really built upon perception; and (2) while the argument of (1) is correct in establishing an important difference between thought and perception, the preconceived idea we have of thinking is more wrong than the idea we have of perception: it is thinking that is really more like perceiving than we tend to believe.

Merleau-Ponty’s phenomenology did not come out of a vacuum, indeed its explicit entanglement in the history of philosophy has already been alluded to. In particular, however, Merleau-Ponty drew together the phenomenology of Husserl and Heidegger, and contemporaneous ideas in psychology, particularly Gestalt psychology, in order to develop a theory of perception, subjectivity, and behaviour. What results has undoubtedly philosophical consequences, but often reads more like psychology: trying to get to the bottom of how it is that we perceive things, and then working from those discoveries to conclusions about thought.

Merleau-Ponty’s use of terms and ideas from Gestalt psychology is central to his articulation of the actual structure of thought. He points out that much like perception, thought is intentional (we think about things, in the same sense that we look at things); the tendencies of thought are shaped by both past experiences and possible behaviour; and thought occurs from perspectives, it is still a view from somewhere. Since much of Merleau-Ponty’s philosophical project, contra Kant in particular, consists in the elimination of the gap between actually possible experiences and hypothetically conceivable ones (by highlighting the incoherence of imagined experiences that go beyond the former), it is appropriate that his work draws on detailed theories of how vision actually operates.

Gestalt theory itself emerged in the late 1910s and early 1920s and positioned itself in direct ‘holist’ opposition to structuralist psychology’s focus on ‘atomism’. Atomist psychology (of the kind developed by Hermann von Helmholtz and Wilhelm Wundt) sought to subdivide perception into single, isolated parts. We open our eyes and somewhere in our vision we detect an object, a wine bottle perhaps, and our senses simply relay that simple signal – perception at large, for the atomist, is just the aggregation of these elementary signals.

Gestalt theorists, most prominently Max Wertheimer, Wolfgang Köhler, and Kurt Koffka, argued instead for an approach to the psychology of perception that did not try to subdivide experience into its smallest parts. They noted that the ways in which we make links between perceptions and experiences is essential to the very structure of seeing, and that these links – the tendency to identify patterns, group objects, and respond to perceptions based on previous experience – are necessarily overlooked by a more atomistic approach.

Perhaps the most famous parts of Gestalt theory, and an ideal example of its departure from structuralist psychology, is its theorization of the figure-ground relationship. The Gestaltist proposition is a straightforward one: when we look at the world (and here we see a decidedly Gestaltist composite of physiological and psychological factors) we impose distinctions on what we see between objects in the foreground – the things we are looking at – and objects in the background – the field against which we distinguish the objects of our intentional perception. It is noteworthy that humans tend to make this distinction even when the image’s foreground-background split is ambiguous. As in the oft-cited vases-faces optical illusion, it is possible to see either the black or the white areas as figure, with the other colour composing the ground, but not both at once.

Merleau-Ponty, in an exemplary instance of his adaptation of Gestalt into philosophy, notes that the necessity of the figure-ground relation to perception is not merely an observable fact about vision, which might – hypothetically – be otherwise, but rather structurally essential to the way perception works. He writes:

“When Gestalt theory informs us that a figure on a background is the simplest sense-given available to us, we reply that this is not a contingent characteristic of factual perception, which leaves us free, in an ideal analysis, to bring in the notion of impressions. It is the very definition of the phenomenon of perception, that without which a phenomenon cannot be said to be perception at all. The perceptual ‘something’ is always in the middle of something else, it always forms part of a ‘field’.”
Merleau-Ponty, Phenomenology of Perception (1945)

Many of Gestalt theory’s other foundational ideas about perception are also woven into Merleau-Ponty’s philosophy of perception, as well as his writing on the structure of thought itself. Gestalt psychology’s seven ‘laws’, which delve into the precise ways we tend to identify and project relationships between things we can see, blur the boundaries between perception and ratiocination. Gestalt theorists situated many of the processes conventionally identified with thought (categorization, prediction, memory) directly within vision itself, as inextricable from the act of perceiving the world.

Merleau-Ponty’s use of Gestalt theory was not without reservations, however, and the theory’s role in his philosophy is caveated by an important critique. While Merleau-Ponty thought that Gestalt’s holistic theory of perception was an important tool in pivoting away from rationalist philosophy and ‘objective thought’, he found in Gestalt a kernel of transcendental thinking that held it back from radically overturning the philosophy of perception.

Transcendentalism is a charge levelled by Merleau-Ponty at many philosophical targets, and serves as a shorthand for an attitude to perception and the world he identifies primarily with Kant. Transcendental philosophy, for Merleau-Ponty, is oriented towards achieving – or ‘restoring’ – a state of ‘consciousness before which the world is spread out and completely transparent’. (Merleau-Ponty, Phenomenology of Perception, 1945)

Merleau-Ponty criticizes Gestalt theory for attempting to elevate the subjective sense-perception to the transcendental status of the incoherent ‘view from nowhere’. In other words, he thinks Gestalt succumbs to the same urge as the rationalist philosopher, in trying to establish concrete, objective access to the world of a kind that transcends our situatedness as perceiving subjects. Although Gestalt’s approach appears phenomenological, insofar as it accepts the necessity of having a viewpoint in the world, the Gestaltist goes awry in trying to give that viewpoint the same status (that of an objective onlooker to the world, rather than one situated in the world) as the one it replaces.

The demand Merleau-Ponty makes of us is a bigger one. Not to reimagine our existing perceptions of the world as the direct and lucid whole of transcendental philosophy, but to stop seeking that complete transparency in any form: to recognise that the fantasy of total perception – the view from nowhere or the view from everywhere – is an incoherent one.