Merleau-Ponty fused the latest developments in philosophy and psychology to develop a distinct and highly influential philosophy of human and animal behavior. 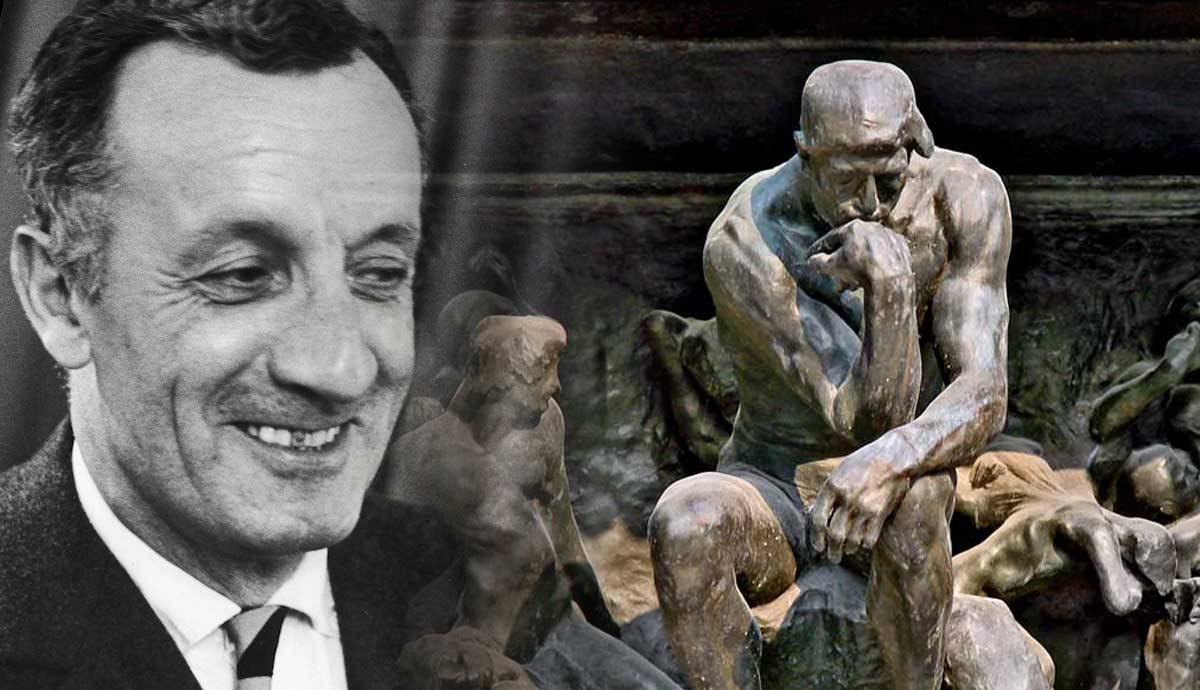 Maurice Merleau-Ponty was one of the most influential philosophers of the 20th century, whose work simultaneously advanced philosophical developments begun in Germany at the end of the 19th century and set the stage for several generations of French philosophers, many of whom were stimulated by his ideas as much as they reacted against them. In this article, we will explore Merleau-Ponty’s philosophical thought on behavior, along with the ways in which he was influenced by thinkers who preceded him.

Maurice Merleau-Ponty: A Question of Upbringing

Merleau-Ponty’s early life was fairly typical of a French intellectual; coming from a military family, he received an education from several Parisian lycées, the École Normale Superieure, before placing 2nd in the agrégation, the examination which is (among other things) used to select future academics within the French system. In 1952, he eventually succeeded to the Chair of Philosophy at the Collège de France, the most senior position in French philosophy, a post he held until his death in 1961.

Merleau-Ponty’s bourgeois upbringing prepared him well for the Second World War, in which he served with distinction. It prepared him less well for the extreme popularity of Marxism – and, for a time, concomitant support for the Soviet Union – among French intellectuals. Merleau-Ponty had, for a time, embraced Marxism, and Jean-Paul Sartre claimed it was Merleau-Ponty who persuaded him to become a Marxist. Merleau-Ponty offered justifications of Soviet farce trials and political violence in the work Humanism and Terror, before taking a turn and adopting a liberal position and rejecting political violence. Most of Merleau-Ponty’s work on behavior came prior to this turn, and whether Merleau-Ponty’s approach to behavior would have stressed the absolute creative potential of human beings quite so strongly after his abandonment of Marxism remains an open question.

Despite his very conventional existence, Merleau-Ponty’s philosophical work was largely out of step with the prevailing norms of French philosophy at the time, dominated as it was by reactions to mid-19th century German philosopher G.W.F Hegel. Merleau-Ponty’s interest in behavior, which he committed to as the main topic of his early work, stemmed partly from a desire to introduce the insight of the burgeoning human sciences into philosophy. Equally, if we are to understand why Merleau-Ponty was so interested in behavior from a philosophical point of view, we have to understand that his interest was not separable from wider philosophical concerns to do with epistemology and the relation of human beings to the world at large. Merleau-Ponty, in fact, wanted to draw on the latest developments in philosophy and psychology to articulate his own theory of knowledge, reality and mind.

Merleau-Ponty’s work on behavior is, on one level, in step with the increasing domination of the study of behavior by the natural sciences. He was critical of existing scientific approaches, particularly the model of human behavior as a reflexive response to stimulus, prominent among psychologists (most famously Ivan Pavlov) at the time, and the rise of behaviorism. Moreover, his work offered an alternative taxonomy of behavior, which divided behavior into three components. Syncretic behaviors are responses to stimuli, characteristic of simple life forms.

Amovable behaviors are orientated towards signals which are not responded to instinctively. Symbolic behavior, which Merleau-Ponty claims only humans exhibit, which is defined by its openness, virtuality and creativity. Yet Merleau-Ponty’s ends were very different from those of the various scientists of behavior whose theories he was so critical of. Indeed, understanding Merleau-Ponty’s ends – and therefore his categorization of human behavior – involves delving deeper into some of his intellectual influences.

Merleau-Ponty’s philosophy is in many ways a synthesis of various different philosophical and psychological traditions, and so it is worth summarizing the developments in philosophy and psychology which influenced him. The most significant influences on Merleau-Ponty came partly from Germany, especially the phenomenological method developed by Edmund Husserl, whose lectures he attended in 1928.

Much of Husserl’s work responded to an old problem; that ‘natural’ thought, meaning both everyday thought and the underlying principles of natural sciences, posits the existence of a reality apart from consciousness, one which does not reckon adequately with subjectivity. Husserl responds to this by suggesting the ‘phenomenological reduction’, an approach to the ‘natural’ beliefs which we have acquired up to now which advocates ‘bracketing’ them – that is, neither negating nor accepting the beliefs in question. Indeed, bracketing of this kind involves suspending any contemplation of whether a belief is true or not in order to ask instead what the conditions of this belief are, and to ask questions about sense making itself.

In Merleau-Ponty’s application to commence the research which became his first major work, namely The Structure of Behaviour (La Structure du comportement), he also mentions the influence of philosophical developments in England and America. The English speaking philosophers he refers to here are generally taken to be Alfred North Whitehead and William James. Whereas Merleau-Ponty’s debt to Husserl is sufficiently obvious that he is often paired with Husserl as a key exponent of the phenomenological tradition, his debt to Whitehead and James is less obvious.

What unifies the pair is their willingness to think in ways which dissolve the distinction between the subject and the object as the foundational spheres of existence, which in Whitehead’s case means treating the world as most fundamentally a nexus of interrelated processes and in James’ case means introducing such concepts as absolute ineffability which in turn can be used to dissolve distinctions between subjectivity and objectivity, between things and selves.

Stressing the primacy of wholes over parts is central to Merleau-Ponty’s approach to human life in general. Seeing philosophy as caught between the naive realism which underlies the attitude of many natural scientists, and the post-Kantian transcendentalism which treats nature as dependent on the activity of consciousness. Merleau-Ponty held that a third approach to the relationship between consciousness and nature is needed.

Behavior as a Form

Understanding the influences on Merleau-Ponty’s thought, we can see what he means when he defines behavior as a form, and in turn defines forms as “total processes whose properties are not the sum of those which the isolated parts would possess….[T]here is form wherever the properties of a system are modified by every change brought about in a single one of its parts and, on the contrary, are conserved when they all change while maintaining the same relationship among themselves.”

The emphasis here is on conceiving of what we call behavior not as a kind of label for various different subsidiary processes but rather as its own form which has its own structure and can only be understood in terms of itself rather than ever more basic parts. The second dimension of behavior, beyond its irreducibility, is the creation of properties internal to it. Thus, the second definition of a ‘form’, as “A field of forces characterized by a law which has no meaning outside the limits of the dynamic structure considered, and which on the other hand assigns its properties to each internal point so much so that they will never be absolute properties, properties of this point”

Form here is not ‘real’ in the way that traditional realists conceive of reality, meaning external to consciousness, but neither is it a product of transcendental consciousness in the manner which Kant and post-Kantian idealists have it. Merleau-Ponty argues that pre-reflectively – that is, before we start thinking about consciousness and reality as such – we both acknowledge our knowledge as perspectival, meaning that it is something we only have because we occupy a certain position in the world, certain capacities specific to us, and yet nonetheless we feel ourselves to be perceiving reality, to have access to the real world rather than merely having access to mediated perception.

Merleau-Ponty wants to preserve something of this pre-reflective perspective: “is not a simple fact; it is founded in principle—all integration presupposing the normal functioning of subordinated formations, which always demand their own due.” Both scientific realism and transcendental idealism force us to separate the whole in a way which obscures the structure of the mind.

The Problem with Merleau-Ponty’s Pre-reflective Thought

Let’s conclude by highlighting a problem with this approach. It is true that certain philosophical problems are framed in terms of binary oppositions in areas which correspond to some area of ordinary life or thought, in which one either does not find a contradiction or one does not conceive of this area in terms of the philosophical binary. Reality and subjectivity seem to be such categories. However, Merleau-Ponty’s characterization of the pre-reflective position omits the many and various differences between how different individuals conceive of themselves and the world, and indeed how different cultures tend to do so.

This is a problem, in as much as Merleau-Ponty is attempting to preserve some sense of how one ordinarily thinks in his philosophical perspective. This is not a problem unique to Merleau-Ponty. In fact, a very different tradition in the Anglophonic or Analytic sphere which came out of the work of Ludwig Wittgenstein – known as ordinary language philosophy – runs into a very similar problem. The way philosophers theorize about the world is very different from the way non-philosophers do; yet any attempt to characterize how non-philosophers do in general runs into enormous difficulties, and any attempt to make distinctly philosophical generalizations, i.e those which no longer correspond to how people ordinarily think.