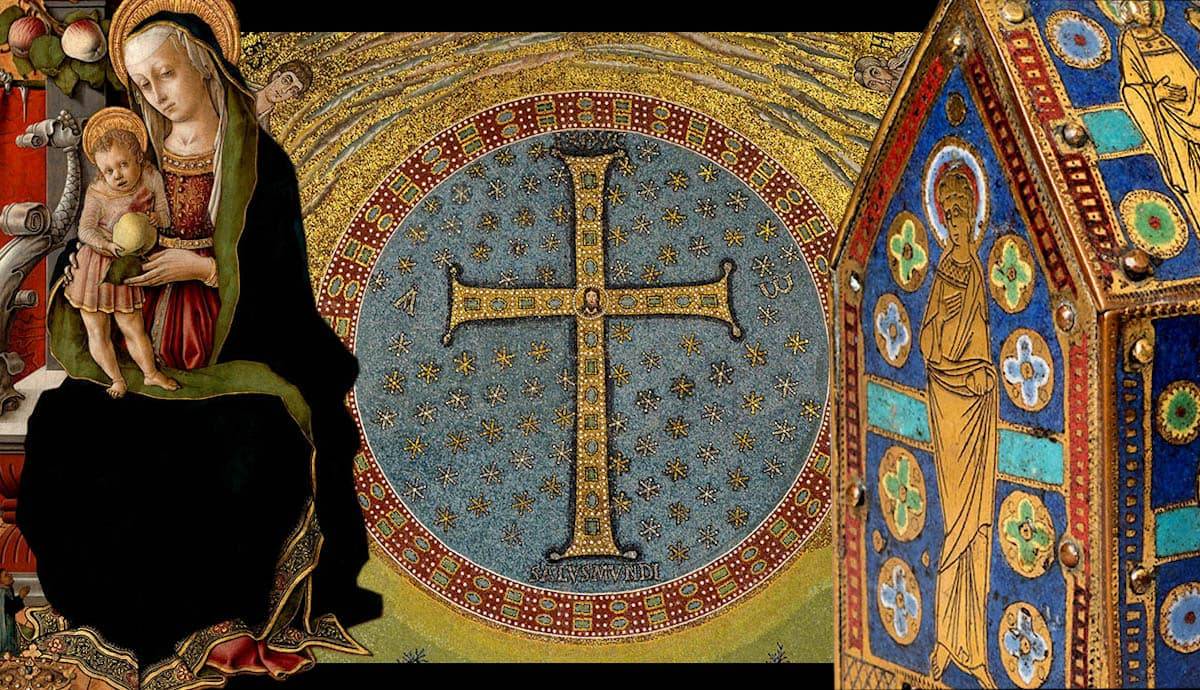 When we recently explored precious metals in medieval artwork, we mentioned that the most exciting metalwork objects were often encrusted with jewels and enamels. Continuing on where we left off, this article will look further into that phenomenon. Gemstones and colored-glass substitutes account for much of the color in medieval metalwork objects, and they also had their own set of heavenly connotations.

Although many have been removed in the modern era, it was once common to find precious and semiprecious gemstones and minerals decorating all sorts of medieval artwork. Their color, shimmer, and rarity all enhanced the appearance and prestige of any object. They appeared not only in crowns and high-status jewelry, as we might expect but also on precious religious objects.

Reliquaries, in particular, often drip with luxurious jewels. This is because pilgrims typically left such offerings behind at shrines they had visited, and these objects often became physically part of reliquaries or religious statues at a later point. Jeweled crosses, like the one shown above, were also very popular in the earlier Middle Ages, as they represented Christ’s triumph over death on the cross.

The Art of Gem Cutting

The practice of cutting facets into gemstones for greater sparkle did not come about until the later Middle Ages. Instead, the stones that appeared in medieval artwork were typically cabochons — rounded in shape and polished to a high shine.

When stones were cut, they were made into cameos or intaglios. These are two terms for semiprecious stones with engraved designs, often portrait heads. In cameos, the designs occur in raised relief (where the background has been cut away to leave raised designs). With intaglios, the designs appear in sunken relief (the design has been cut down into raised negative space).

Today, cameos seem stuffy and old-fashioned, but they were long considered sophisticated and chic. Cameos and intaglios from the Hellenistic Greek and Classical Roman periods were especially prized, and many examples found second lives adorning Medieval and Renaissance metalwork objects.

Stained glass, mosaics, and enamels abound in medieval artwork. Although all three are types of colored glass, rather than minerals, gems, and jewels, we can think of them as gemstone substitutes. They serve many of the same aesthetic and symbolic functions. Most notably, enamel often appeared side-by-side with gemstones and minerals in medieval artwork.

Enamel is powdered, colored glass fused to metal. There are several different methods of enameling, depending on the time period, complexity of the design, and the type of metal involved. In some techniques, the image was colored enamel and the background was made from metal; in other methods and styles, it was the backgrounds that appeared in colored enamel, while the figures appeared in engraved metal.

The earliest medieval examples used the cloisonné technique, which involved creating small cells out of thin gold pieces and then filling each cell with a single color. The treasures found in the Sutton Hoo and Staffordshire hoards, as well as in the grave of the Frankish King Childeric, included numerous examples of cloisonné garnets and blue enamels set side-by-side. By contrast, champlevé enamel, a technique using gilded copper, involved hammering depressions in the metal that were then filled with powdered glass. Later methods allow for more complex scenes with color blending on curved surfaces. Enamels can be either translucent or opaque. If translucent, textures worked into the underlying metal could create different effects of light, like facets on a modern-day diamond. The Byzantines were expert enamel artists, but the French city of Limoges also became renowned for its enamel production. Limoges even made many works for the mass market.

Illusions of Gemstones in Medieval Artwork

Occasionally, gemstones might even be set into the surface of a painting. More often, painters skilled in the art of illusion could also produce highly-believable facsimiles of gemstones. Representations of jewels and gemstones appeared frequently in two-dimensional Medieval and Renaissance art, such as panel painting, manuscript illumination, and even mosaics. It mostly occurred in depictions of monarchs and religious figures decked out in finery, as well as in images showing jeweled crosses, reliquaries, and treasure bindings — exactly the kinds of objects we’ve been discussing. Using gesso (a type of glue used to adhere gold leaf to paintings), gilding, and paint, artists sometimes produced fake gems that were actually raised above the surface of the painting, just like a real inset gem would be.

Among the many non-precious stones and minerals to appear in medieval artwork, clear quartz crystal, sometimes known as rock crystal, had a special significance. It was valued for its high degree of translucency at a time when perfectly clear glass was not very prevalent. Pieces of rock crystal were sometimes added to reliquaries to provide views of the relic inside. This material was a popular choice for drinking and serving vessels, as many believed rock crystal to have a protective function against poisons. Designs worked into rock crystal ewers and flasks would come alive when set against the colored liquids placed inside. Medieval lore suggested that rock crystal was some kind of super-frozen water, like ice but permanent. It has long been associated with purity and even magical powers.

Rock crystal is tricky to work with, since it shatters easily. Islamic craftsmen, particularly those in Fatimid Egypt, were the best rock crystal artists in the world during the Middle Ages. That’s why many European Christian objects reused rock crystals originally shaped and decorated in the Islamic world. At this point in history, churchmen saw no contradiction in using repurposed Islamic objects, even those with Arabic inscriptions on them, in expressly Christian contexts.

From diamonds and sapphires to agate, quartz, and pearls, both precious and semi-precious stones have long been believed to possess special properties and associations. Texts called lapidary manuscripts helped makers and patrons understand the attributes assigned to various gemstones (the word lapidary also refers to cutting and polishing gemstones in a larger sense).

Much like bestiary manuscripts, lapidaries provided both pseudo-scientific and symbolic or religious connotations for each gemstone and mineral. Pliny the Elder’s Natural History, a classical Latin text, was the original source for this information. However, later writers also provided their own interpretations, such as Marbod of Rennes in his Liber Lapidum of c. 1090 CE and Albertus Magnus in his 13th-century The Book of Minerals. Lapidary manuscripts might relate the medical implications of various gems and minerals, in addition to their physical properties, spiritual or magical effects, and Christian symbolism. For example, diamonds supposedly protected wearers against insanity, and emeralds could help with epilepsy and memory problems, while both sapphires and garnets brought happiness to their owners. Various gems and their properties even appear in Dante’s Divine Comedy.

Gemstones also appear in the Bible. The most important reference, in chapter 21 of the Book of Revelation, states that the Heavenly City of Jerusalem was built with gold and lined with twelve different types of gems. This passage became justification for a lot of the stained glass and mosaic-incrusted church interiors created throughout medieval Europe. They aimed to evoke a Heavenly Jerusalem on Earth, or so scholars suggest. Think of churches like Hagia Sofia in Istanbul, with its gold mosaics, and the Sainte-Chapelle in Paris, with its massive, stained-glass windows. If they’re not earthly manifestations of this Heavenly City, they’re at least walk-in reliquaries. They are like gemstones on a grand scale, despite not being made of gemstones themselves.

Abbot Suger (1081-1151 CE), head of the Abbey of Saint Denis near Paris, was a particularly enthusiastic fan of using gold, jewels, and stained glass within his church. He went so far as to claim that looking at these precious metals and jewels put the faithful in the appropriate mindset for worship.

Suger had some complex theological ideas about the spiritual power of light, particularly the colored light of jewels and gems. Derived from the writings of earlier Christian theologians, Suger expressly used these ideas as justification for his costly building and glorifying projects at Saint Denis. Describing the church’s precious furnishings, he wrote:

“Thus sometimes when, because of my delight in the beauty of the house of God, the multicolor loveliness of the gems has called me away from external cares, and worthy meditation, transporting me from material to immaterial things, has persuaded me to examine the diversity of holy virtues, then I seem to see myself existing on some level, as it were, beyond our earthly one, neither completely in the slime of earth nor completely in the purity of heaven. By the gift of God I can be transported in an anagogical manner from this inferior level to that superior one.”
(Abbott Suger, De Administratione, Chapter XXXII, trans. David Burr. Internet History Sourcebooks Project, Fordham University, 1996.)

Unfortunately, most of Suger’s jeweled church furnishings were lost during the French Revolution, though his stained glass-filled church remains. Because of his role in rebuilding the choir at Saint Denis, Suger is generally credited as a key founder of the Gothic architectural style. With its soaring vaults and large, colorful windows, this incredibly popular and influential style rests firmly on a foundation built from Suger’s spiritual love of jewels and colored light. What an immense legacy for such tiny gemstones!