These elaborate gold and silver objects are some of the most beautiful possible examples of medieval artwork. Learn why and how these luxurious items were created. 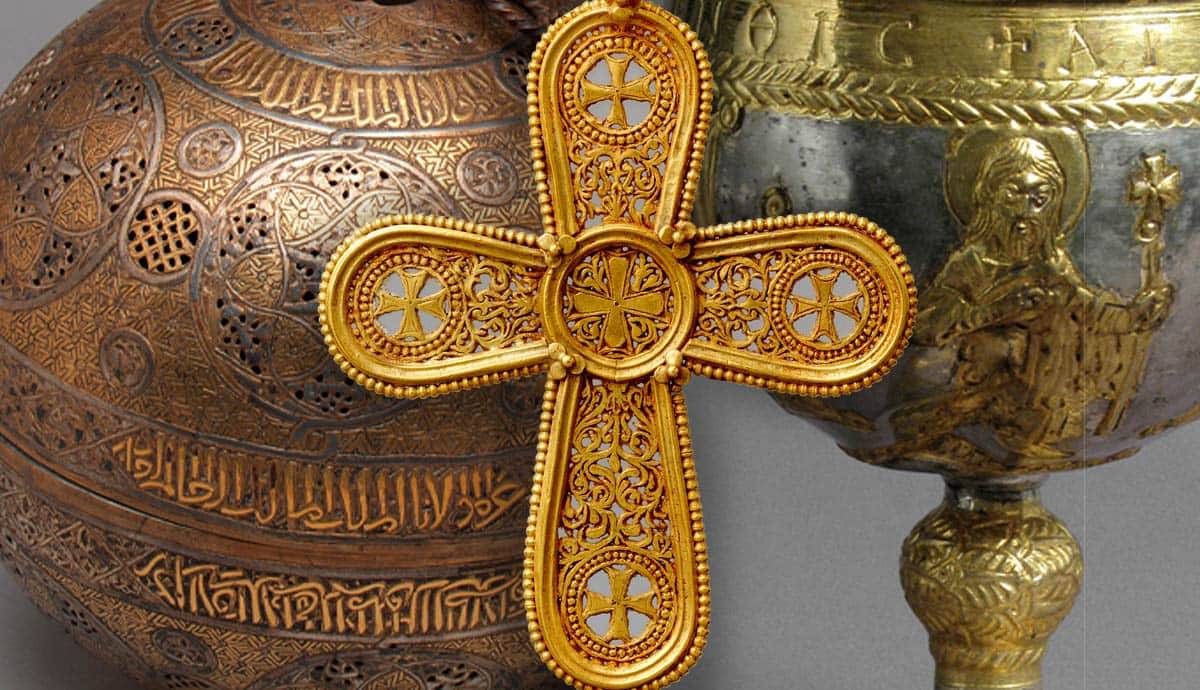 Did you know that some of the most beautiful medieval artwork was made of gold and silver? Skilled metalworking was highly valued throughout the medieval world, from Byzantine and Islamic lands to the Germanic, Celtic, and Anglo-Saxon peoples of Western Europe. Imagine how these elaborate, gold and silver masterpieces would have glittered in a candle-lit church, mosque, or castle.

Why So Much Medieval Artwork Was Metal

It’s easy to understand why all this shine and sparkle appealed to medieval patrons, especially with intricately-worked, jewel-studded objects. Precious metals and gemstones were as expensive and prestigious in the medieval world as they are today, if not even more so. Anybody wanting to show off their wealth and status could do so by commissioning luxury objects to wear, use, or donate to a local religious foundation. It wasn’t only the raw materials that were expensive. Creating this level of tiny, intricate, perfect detail took serious skill, and that, too, could command a high price. This craftsmanship was as much a prestige commodity as the materials were. Skillfully worked gold and silver were highly valued in the classical world, and Roman examples were emulated into the early Christian period and beyond.

Medieval goldsmiths worked primarily with gold, silver, copper, and copper alloy (bronze) for decorative medieval artworks. The last two, which are less prestigious, would almost always have been gilt (covered with a thin layer of gold leaf) to create the illusion of solid gold. Objects might be made entirely of metal, either solid or hollow, or they might consist of decorated metal plaques attached to a wooden core. Such objects have often been broken up in later periods, scattering their plaques to different collections all over the world.

However, the most beautiful objects didn’t rely solely on metal. Medieval metalwork, particularly that created for sacred or royal purposes, was often set with precious and semiprecious gemstones, colorful enamels, and antique ivories or cameos. The idea of a mixed-media artwork is far from new. Often, the reuse of classical and early-Christian jewels or carvings added prestige to an object.

Medieval goldsmiths had a few possible methods for shaping metal objects. They might hammer from the front (chasing), hammer from the back (repousse), use a stamp, or cast in a mold. The lost wax method is a very old casting technique that involves several steps. First, the artist modeled the desired object out of beeswax, covered it with clay, and baked it until the clay hardened and the wax melted (hence “lost wax”). Then, they poured molten metal into the clay mold through pre-prepared channels. When the metal hardened, the clay mold was removed to reveal the finished object.

Using this technique, each mold could only be used once, since it was broken during the process, but other methods allowed for re-use. Regardless of the technique, objects and motifs could be shaped in three dimensions (in the round) or raised above a flat background (in relief).

Once shaped, several other techniques created further decoration. Engraving involved cutting designs into the metal, and embossing used metal stamps to create raised designs, while punching or piercing created holes going all the way through. Decoration that uses tiny beads of metal is called granulation, and the use of thin wires is filigree. Niello, a blackish-colored metallic alloy, was often used to create lines of detail to contrast with gold or silver. Metal medieval artworks could also include carved designs made using a technique called chip carving.

Decorative motifs could be figurative, geometric, or somewhere in between. For example, Islamic objects typically included geometric and plant (foliate) motifs alongside elegant Arabic inscriptions. European Christians avidly collected and emulated these styles in appreciation of superior Islamic luxury and craftsmanship.  Anglo-Saxon, Celtic, Germanic, and Viking objects featured elaborate patterns of interlace, often with animal heads and tails, and “zoomorphic” animal imagery. The treasures of the Sutton Hoo and Staffordshire hoards are classic examples. Many scholars believe that British and Irish decorative motifs in other media, like illuminated manuscripts, originated from this metalworking tradition. Western European objects made for religious use often depicted Biblical scenes, and later examples sometimes employed elements of Gothic architecture like pointed arches, gables, and tracery.

The possible techniques and motifs of medieval artwork changed over time and varied by location and culture; metalwork was no exception. Although we might observe that later metalwork objects were larger, with more figurative imagery and complex shapes, we should not underestimate the mind-boggling intricacy and delicacy of earlier examples.

Types of Objects in Medieval Artwork

Reliquaries are basically very elaborate containers for relics — sacred objects associated with Jesus, the Virgin Mary, or the saints. Relics were a big deal in the Middle Ages because they were believed to cause miracles. The faithful would visit shrines where relics were kept, in hopes that close contact would cause the holy person to bestow such miracles upon them. The most significant relics even inspired supplicants to journey on long pilgrimages to visit them. For a church or monastery, owning relics was an important source of both status and income.

A good reliquary had to be eye-catching and impressive to advertise the importance of its sacred contents. It also had to keep the relic within it safe and secure, while also allowing pilgrims to access it in a controlled fashion. Reliquaries took many forms and sizes; they are probably the most varied and interesting of all medieval metalwork objects. There are tiny little reliquaries, often cross-shaped, that were meant to be worn by a private individual, as well as larger reliquaries meant for monasteries and cathedrals. The box shape (casket) and the shrine or house shape were both popular. The latter looks like a tiny church or smaller version of the shrines that might house a saint’s body. It was also common to shape reliquaries like crosses or the part of the saint’s body contained within it.

The treasure binding is the most fantastic type of medieval artwork that we don’t hear nearly enough about. Treasure bindings are rich and fabulous covers for medieval religious manuscripts. In today’s world, we try not to judge books by their covers, but these covers could be pretty impressive. Gospel books were the most likely to have treasure bindings; containing the Word of God, they were considered especially worthy of such treatment.

Unfortunately, few complete treasure bindings survive today, and even fewer are still connected to their original manuscripts. Most medieval books in museums and libraries today have been re-bound many times in their lives.

Altar furnishings could include everything from standing crosses and altarpieces or altar frontals, to the varied objects used in the Eucharist, like chalices and patens. Famous items like the Pala d’Oro, Ardagh Chalice, and Gloucester Candlestick fall into this category. Just as with reliquaries and gospel book bindings, the bread and wine of the Eucharist were highly sacred objects that required worthy vessels to contain them.

Not everybody in the Middle Ages approved of such great expense being lavished on church objects, however. Some people worried that all this opulence distracted the faithful and clouded clerics’ minds. Others felt uncomfortable with the sums spent on luxurious art when Christ himself has preached poverty and charity to the less fortunate. Obviously, the enthusiasts outweighed the dissenters. Many Popes, bishops, and abbots felt that God’s glory required equally glorious houses of worship on Earth to celebrate Him. Besides, donating luxury objects to the church was a favorite way for rich royals and nobles to demonstrate their charity and devotion.  It wasn’t until the Protestant Reformation that serious opposition to precious objects in the church gained any real ground.

Gold in Paintings and Manuscripts

In the Middle Ages and early Renaissance, gold and silver also appeared in paintings, both freestanding icons or altarpieces and illuminated manuscripts. In such works, the gold could appear in the figures, especially in their haloes and clothing, in the backgrounds, and on the complex wooden frames for elaborate altarpieces. Unfortunately, examples of these impressive gilt frames do not survive well today.

By building up layers of gesso, the glue used to attach gold leaf to panels and pages, artists used a technique called pastiglia to create raised designs in their gilding. Flat areas of gold leaf might also be punched or tooled to create patterns within them. Unlike with treasure bindings, copious gilding appeared in both sacred and secular manuscripts.

Surviving Medieval Artwork Made From Metals

Metalwork is easily melted down and sold for its value as a commodity. This can happen when tastes change, or when money is suddenly needed. This fate is less likely to befall objects owned by churches and used for sacred purposes than objects owned by private individuals whose fortunes rise and fall. This is why secular luxury objects survive in much smaller numbers; the earliest intact examples were often buried and rediscovered at a later date.

However, Christian metal objects suffered a great deal during times of religious upheaval and war. Some examples still live in church treasuries today, but many more were destroyed or sold off. During the medieval Viking invasions of Britain and Ireland, raiders targeted monasteries specifically because they knew that these institutions kept lots of precious objects ripe for the picking.

Scores of Byzantine medieval artworks depicting religious figures were lost during Iconoclasm, a period of time when the Byzantine church banned figurative imagery in religious contexts. Meanwhile, Islamic metalwork on display in museums has usually passed through numerous hands and purposes over the centuries. Many centuries and events later, it’s a miracle that so much medieval metalwork survives for us to enjoy today.

Why does Baby Jesus Look like an Old Man in Medieval Religious Iconography?