What Are Jan Van Eyck’s Most Famous Paintings?

Flemish Renaissance painter dazzled audiences with his astonishingly lifelike, deeply intricate paintings. We look at a handful of the best. 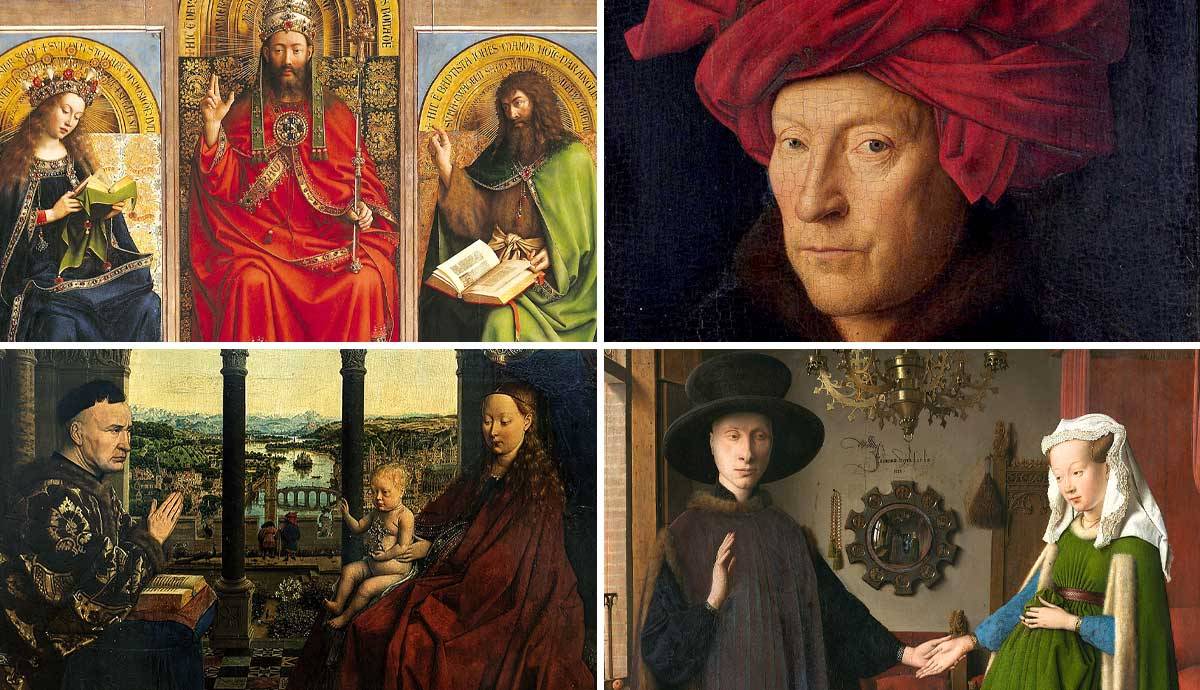 Flemish painter Jan van Eyck was one of the greatest artists of the Northern Renaissance. From glossy mirrors to polished jewels and indulgent fabrics, he created a high-octane naturalism that influenced generations of artists to follow. Since then, his art has continued to dazzle and astonish audiences throughout the centuries. Some suspect he might have used optical aids to assist him in achieving such microscopic detail, while 16th century Florentine art critic Giorgio Vasari even claimed Van Eyck invented the practice of oil painting that later swept across Europe. We look through just a handful of Van Eyck’s most celebrated masterworks in honor of his almighty legacy.

The Ghent Altarpiece, by Hubert and Jan van Eyck (1432)

The Ghent Altarpiece, also known as the Adoration of the Mystic Lamb, is one of the finest artworks of all time. An incredible 24 panel altarpiece, it illustrates a series of Biblical themes relating to Redemption and Salvation, while in the center is the Annunciation. Research suggests it was Jan van Eyck’s older brother, Hubert Van Eyck, who began work on the altarpiece, but Jan completed the masterwork. Either way, the intense, vivid patterns of color and incredible attention to detail in this vast and richly complex work of art is a true feast for the eyes. Close study also reveals the altarpiece hides many layers of Biblical symbolism, such as white lilies to symbolize Mary’s purity, and a dove to represent the Holy Spirit.

Throughout his career Van Eyck pioneered a new brand of portraiture conveying not just aristocrats but people from all walks of society. Van Eyck also popularized the three-quarter view, as seen in this brooding, enigmatic portrait. While no one actually knows who the man in this portrait is, some believe it is a self-portrait, due to the intensity of the sitter’s gaze, which suggests close self-scrutiny. Meanwhile the artist often painted himself in other works of art wearing the same red headdress.

No list of artworks by Van Eyck would be complete without the dazzling wonderwork The Arnolfini Portrait. A secular portrayal of a real-life husband and wife, this staged, full-length portrait would most likely have been a showpiece for the wealthy, middle-class couple to display in their new home. Van Eyck rendered every aspect of the painting with near-photographic attention to detail, from the glistening reflection in the mirror to the polished sheen of the chandelier suspended from the ceiling. Van Eyck also captures the varying textures of fabric here with masterful precision, and it is as if we can reach out and touch their surfaces. As with many of his paintings, there is an enigmatic quality to this painting that has prompted critics to guess whether or not it is loaded with hidden symbolism relating to the vows of marriage and fidelity.

As well as producing secular portraits, Van Eyck also frequently created religious, Biblical scenes with the same care and intricacy. In this richly textured and colored artwork Van Eyck depicts a donor (possibly Chancellor Rolin, who commissioned the artwork) greeting the Madonna and Christ child. Mary is adorned in a rich red velvet robe adorned with glittering embroideries that draws our eye immediately towards her. Meanwhile an angel hovers above her, a reminder of her otherworldly status. Curiously, the donor does not interact with Mary, nor she with him. Some art historians argue Van Eyck therefore alludes to the fact that the donor exists on the earthly realm, and Mary and Christ in the heavenly realm, meaning he cannot actually see her, but she is there in spiritual presence only.

Who Made the First Oil Painting?