HomeAnswersWhat Is Magical Realism in Art? 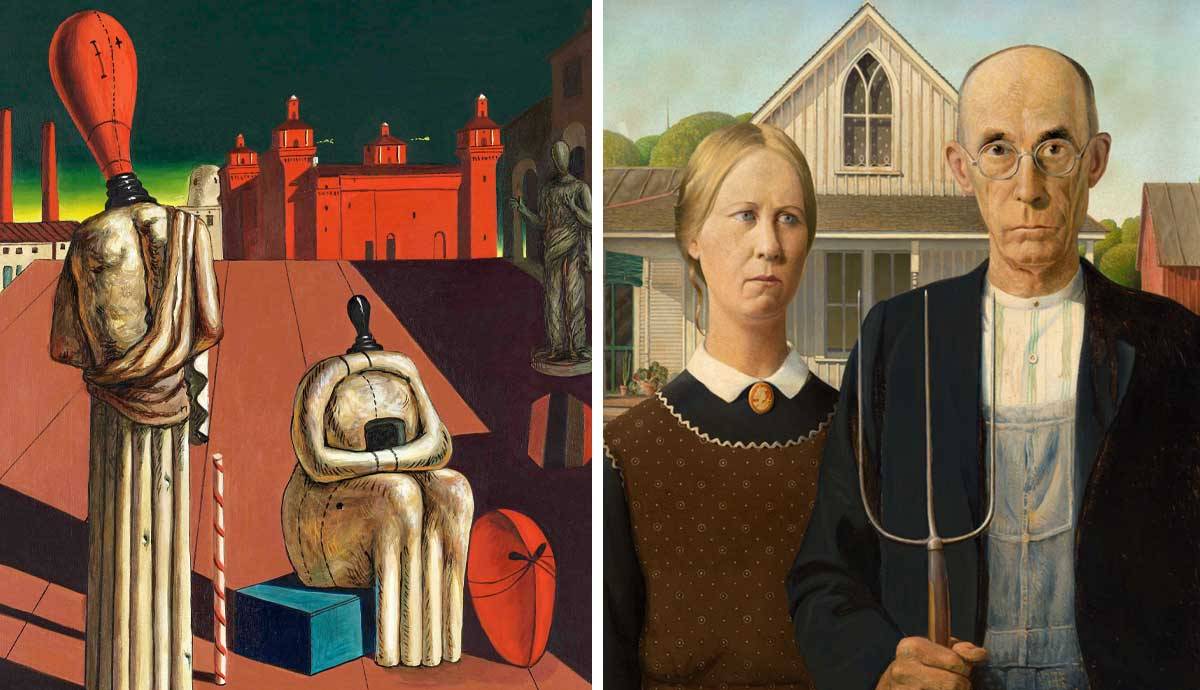 Magical Realism was an art term that was first invented by the German photographer, art critic and historian Franz Roh in 1925. He used this term to describe artworks which merged elements of realism with the fantastical, disturbing, mythological and dream-like. Some years later, New York’s Museum of Modern Art wrote how, “Magic Realists try to convince us that extraordinary things are possible simply by painting them as if they existed.” Leading practitioners of the style include Italian painters Giorgio de Chirico and Alberto Savinio, many of the French Surrealists and American painters Paul Cadmus and Ivan Albright. Mexican artists Diego Rivera and Frida Kahlo also pioneered their own brands of Magical Realism. Let’s outline some of the most important cornerstones of this artistic style.

Magical Realism emerged concurrently with a style of German painting called Neue Sachlichkeit (New Objectivity), that grew in popularity after World War I. As an antidote to the pre-war Expressionist styles of European art, New Objectivity was figurative, focusing on strange, haunting and satirical imagery that reflected the changes going on in modern society. German artist Max Beckmann was a leader in the style. Magical Realism grew out of a branch of this style, but it was less overtly political, emphasizing strange depictions of reality with a haunting or magical quality. In 1925, Roh published a book that brought together a strand of European art in this new style, titled After Expressionism: Magical Realism: Problems of the Newest European Painting.

2. It Crossed Lines with Surrealism

Magical Realism and French Surrealism were close cousins. Both movements featured the work of artists who painted strange, dream-like or nightmarish content. But where the Surrealists were generally more drawn to ideas around dreams and the inner workings of the unconscious mind, artists associated with Magical Realism were more interested in drawing out qualities that were already inherent in reality. Some artists crossed a line between the two styles, such as French Surrealist painters Leonora Carrington and Rene Magritte.

Several artists from the Northern European Renaissance influenced the Magical Realists. These include Jan van Eyck, whose hyper-real attention to detail and heightened colors created odd, unsettling visual effects. Another is Hieronymus Bosch, who painted strange, haunting worlds filled with all manner of monstrous creatures.

4. They Played with Strong Lighting Effects

Many artists linked with Magical Realism played with how exaggerated lighting effects could create strange, uncanny visual effects. We see this quality at play in the art of Italian painter Giorgio de Chirico, who placed statues and ruins in amongst angular, directional shadows. Later, the American painter Edward Hopper painted scenes from ordinary life in America with strong angles, crisp light and deep shadows, showing how these effects can add an eerie sense of unease and cinematic narrative to his paintings.

In the United States a strand of Magical Realism emerged which emphasized painting reality with strangely distorted, hyper-real qualities. For example, Andrew Wyeth’s creepy painting Christina’s World, 1948, showed the artist’s disabled neighbor as she dragged herself through the endless wheat fields of her home. Meanwhile, Grant Wood’s American Gothic, 1930, shared the same quiet air of unease, showing a couple guarding their private land.

6. Magical Realism Was Prevalent Across Mexico

In Latin America, Magical Realism was a prevalent style across many art forms. Indeed, the style tapped in to the nation’s history for fantastical storytelling. Mexican writer Gabriel García Marquez explained, “In Mexico, surrealism runs through the streets. Surrealism comes from the reality of Latin America.” One of the most famous was the Mexican painter Frida Kahlo. Her paintings are loaded with references to her Mexican identity, and her ongoing health struggles.