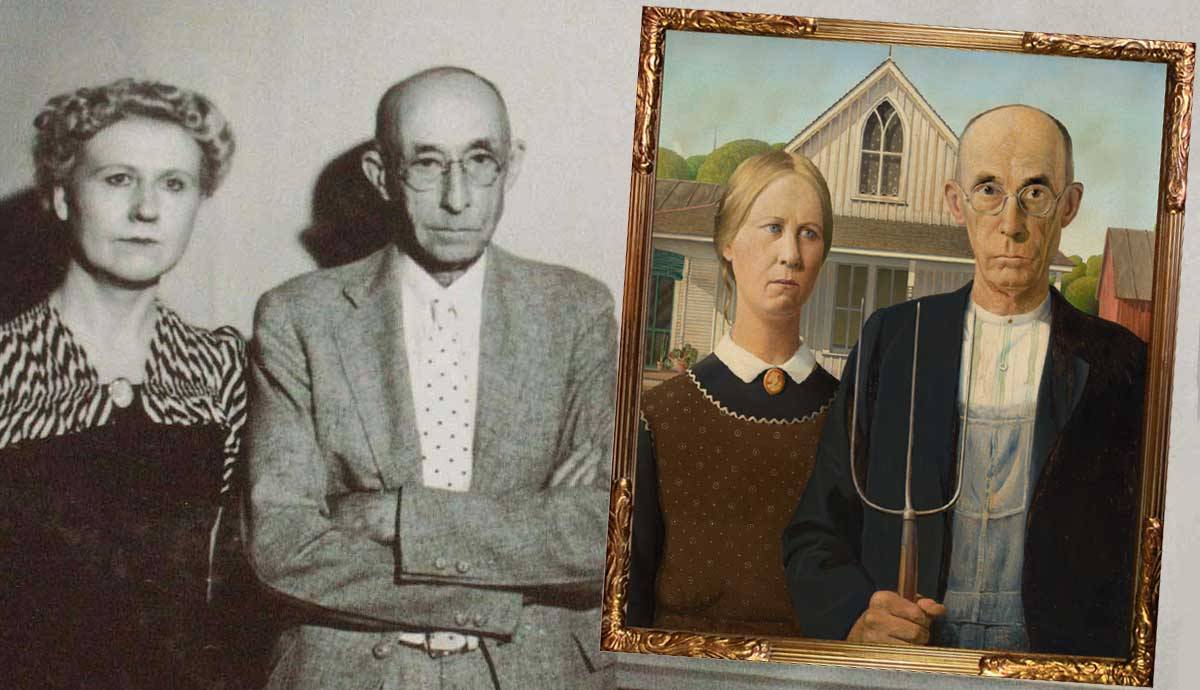 It is an image that most of us know by heart: a man menacingly holds a pitchfork, while a woman stands by in Sunday best, as stiff as a rod. Behind them is a timber house with an eerie black window. This is American Gothic, an icon of American art, and an austere emblem of rural life in the mid-western United States. Painted by Grant Wood in 1930, the artwork has become the subject of study and parody throughout the art world for nearly 100 years. Many historians saw the painting as a satirical commentary on the backward-looking Midwesterners who were out of touch with the modern industrialized world. But the artist has always argued there is more to the image than meets the eye. Let’s look through some of the core reasons that drove Wood to make this enduring painting that continues to be a subject of fascination.

American artist Grant Wood was first inspired to tackle the subject of this painting after making a drive through the town of Eldon in Iowa. He saw the white house that features in the background of the painting, built in the Carpenter’s Gothic style of architecture in the 1880s. The style was an American take on Victorian Gothic, prevalent across 20th century rural America, and it is from this reference that the painting takes its name. This old-fashioned, provincial house became Wood’s foundation for building a believable narrative. Wood set about finding a couple of models who looked as though they might live in such a house – he had the idea that it would be populated by “severely strait-laced characters.”

After finding two suitable models, neither of whom knew each other, Wood deliberately dressed them in the type of old-fashioned clothing that he thought suited this austere architectural style, along with props suggesting rural work. The real woman was in fact Wood’s sister, while the man was a dentist from the artist’s home town. To blend the figures with the building, Wood thinned and elongated their faces, as well as stretching the building’s windows and roof. This strange distortion makes the painting feel particularly creepy. He even mirrored the couple’s dark clothing with a darkened window behind them.

Earlier in his career as a painter, Wood had tried out various styles of expressive, modernist painting. He spent time studying in Paris, and experimented with Impressionist techniques. But on his return to the United States, Wood deliberately turned his back on modernism. Instead, he became part of a generation of American painters known as the Regionalists, who painted the lives of ordinary local people in a highly detailed, figurative style.

Wood was particularly influenced by the Flemish Renaissance painter Jan van Eyck. We can see Van Eyck’s influence in the strange distortions and crystal-clear realism of American Gothic. Wood has also been associated with the international style of Magical Realism, an umbrella term for mid-20th century art which subverted or enhanced real life subjects to create dream-like, otherworldly effects.

Wood made this painting at the beginning of the Great Depression and he argued that one of his main aims was to create a reassuring image of stability and security during a time of nationalized disruption. He said he was celebrating ingrained, old-fashioned rural values such as family, land work and religious piety. Because these values were so out of step with rising modernity and cosmopolitan life, the painting became the subject of much ridicule and derision. Art critic Clement Greenberg deemed it crass and “vulgar”, while others mocked the painting for its “fake folkery.”

Was American Gothic a satire, mocking the small-minded hostility and provincialism of rural America with a pair of austere and territorial people? Or was Wood simply documenting the traditional values that persisted throughout the less urbanized states? That so much of the painting was a staged set-up suggests Wood knew there would be an element of fakery to the final image. Art critic and writer Gertrude Stein was one of many who deemed the painting a, “devastating satire.” And although Wood refused to be entirely direct about the painting’s intentions, he later confessed with some reluctance, “There is satire in it, but only as there is satire in any realistic statement.”

The Gothic Revival: How Gothic Got Its Groove Back