The Nazi regime organized the Entartete Kunst (Degenerate Art) project to spread a message of hate while exhibiting some of the best pieces of 20th-century modernist art. 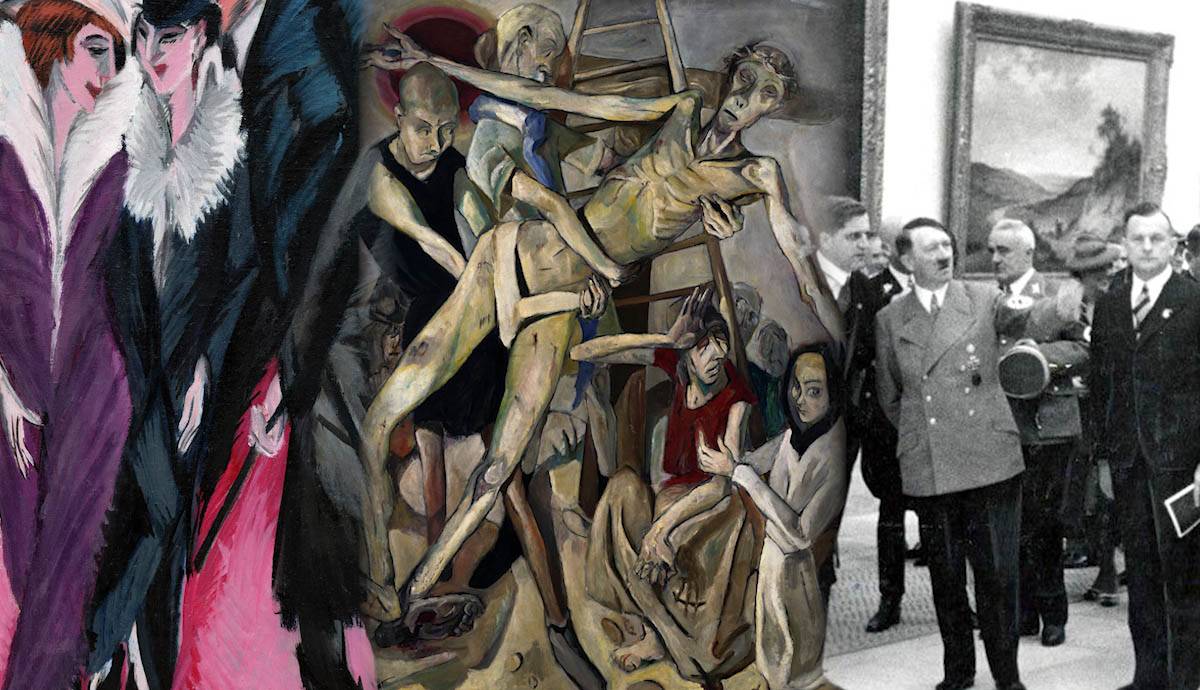 In July 1937, the German Nazi regime sponsored the Entartete Kunst (Degenerate Art) exhibition in Munich. The exhibition’s central theme was to “educate” the public on the “art of decay.” One of the main driving forces of the exhibition was the desire to draw a direct parallel between the characteristics of modern art and genetic inferiority and moral decline. In this way, Germany began the confiscation of artworks deemed degenerate from a variety of museums throughout the Reich and combined the taken works into one single, coherent exhibition for their further ridicule and mockery.

July 19th, 1937 marked the opening of the infamous exhibition. Within the dark, narrow walls of the Institute of Archeology in the Hofgarten, explicitly chosen as a venue for its unflattering spatial qualities, hung 650 works from 112 artists, primarily German and some foreign. The first three rooms of the Entartete Kunst exhibition were grouped thematically. The rest of the exhibit had no particular theme but was heavily adorned with various derogatory slogans such as: “madness becomes method,” “nature as seen by sick minds,” “revelation of the Jewish racial soul,” “the ideal—cretin and whore,” along with many others.

All the artworks were curated in such a way as to conceal the skillful accomplishments of many masters of the modernist movement. For example, many pieces were stripped of their frames and displayed with their acquisition price and the name of the museum director.  This was an effort to provide further proof of conspiracies regarding the existence of an artistic elite who had “alien elements,” such as Jewish people and Bolsheviks.

It is widely thought that the Chancellor of the German Reich, Adolf Hitler, was the mastermind behind the opening of the Entartete Kunst, or Degenerate Art exhibition. Although his antipathy for modernist art is still undisputed, the “abomination” exhibition was actually not his brainchild. Instead, it was Hitler’s closest associate and Reich of Minister of Propaganda, Joseph Goebbels, who came up with the project.

In a diary entry from June 5th, 1937, Goebbels writes: “Horrible examples of art Bolshevism have been brought to my attention. Now I am going to take action . . . . I want to arrange an exhibit in Berlin of art from the period of degeneracy. So that people can see and learn to recognize it.”

Originally, Hitler was not too thrilled with Goebbels’s proposal, but he soon came around when he realized the possibilities in holding the Entartete Kunst exhibition in Munich instead of Berlin. In Munich, the Degenerate Art exhibition would take place concurrently alongside the pre-contrived Große Deutsche Kunstausstellung (Great German Art Exhibition). Effectively, this meant that Hitler could be responsible for the most notorious confrontation and comparison of conflicting artistic styles in history. Eager to take hold of this opportunity, Hitler approved the proposal on the 30th of June and appointed Adolf Ziegler, the head of the Reich Chamber of Visual Arts and “painter of svelte asexual female nudes,” responsible for the collection and curation of the artworks.

The Most Successful Exhibition of Modernist Art in the 20th Century

The Entartete Kunst exhibition was a heavily rushed project. Ziegler and his team hastily raced to collect all 650 works gathered from 32 public museums around Germany. In fact, the show was so haphazardly organized that three pieces were included that did not even fall under the modernist style category on the day of its opening. Hitler also insisted that entry to the exhibition would be free so as to encourage the public to attend and have them comprehend the qualities of degenerate art. By the end of the exhibition on November 30th, 1937, and to this day, Entartete Kunst remains the most visited modern art exhibition in history with over 2 million visitors. One million individuals were reported within the first six weeks alone, while an additional million saw the Degenerate Art project as it traveled throughout Germany between February 1938 and April 1941.

Reception From the Public

Although the exhibition certainly managed to convey the Nazi abhorrence for modern art, many have speculated that its record of public attendance was really due to the mainstream’s love for modern and avant-garde art. During the first decades of the 20th century, before the rise of the National Socialist Party in Germany, abstract and radically new forms of art were at the epicenter of public attention and adoration. As a result, many of the artists and art pieces that were very well-loved and known by the German public were subsequently put on display during the Degenerate Art program as “degenerate pieces,” possibly also because of their initial popularity.

One of the pieces with such a tragic shift in fate is the extremely adored sculpture of German artist Wilhelm Lehmbruck, Kneeling Woman, 1911. Lehmbruck’s piece was considered one of the greatest works of modern art in Germany before 1937 until its imminent removal from the Kunsthalle Mannheim and its labeling as “degenerate.” Other such pieces subjected to the same treatment included Max Beckmann’s Descent from the Cross, 1917, which had been hanging in the Städelsche Kunstinstitut in Frankfurt, and Ernst Ludwig Kirchner’s Street, Berlin,1913, which the Nationalgalerie in Berlin had acquired around 1920.

Art Propaganda Under the Nazi Regime

From the very moment that the Nationalist Socialist Party came to power, its leaders immediately placed art and the artistic domain at large under a microscope. The party’s agenda was as much political as it was cultural. The Nationalist Socialist cultural-political revolution spread like wildfire. Many museum directors, curators, art professionals, and art scholars were dismissed and replaced by others affiliated with the Nazi Party. Meanwhile, avant-garde pieces were immediately removed and publicly ridiculed in similar ways to the Entartete Kunst initiative. At the same time, offices like the Reich Chamber of Visual Arts began popping up to engage in a sort of national artistic surveillance as well as produce art propaganda.

After the extensive removal of all modernist artworks from German museums in which more than 20,000 pieces were deemed “degenerate,” the pieces were stored at a former granary on Köpenicker Straße 24A in Berlin. It is interesting to note that apart from being considered elements of societal and mental degradation, modern art could also be used as an additional source of revenue for the Nazi regime. Outside of totalitarian Germany, modern art was adored widely across Europe and North America and was sought out as an expensive commodity. However, from those 20,000 pieces stored in the granary, less than 4500 were officially considered “internationally marketable.”

The Disgust For Modern Art

Disgust towards modernist works of art is a familiar narrative during the history of the Third Reich. At the time, modern art was a beacon of change, greatly associated with the spirit of mental, spiritual, and societal exploration. The movement disassociated itself, both in style and theme, from the traditional discourse of narrative and representation illustrated in works before the 19th century. Instead, modern art centered predominantly around abstraction, the human psyche, and fragility.

The Surrealists explored the secrets of the subconscious; the Cubists experimented with new, alien points of view. In contrast, others, like the Dada movement and the Futurists, offered a direct social critic of society. These new traditions directly contrasted with the ideals found in Nazi artistic imagery. Greek and Roman iconography inspired the model for German Nazi art, meant to allude to the effects of heroism and romanticism.

Hitler’s apathy grew along with his belief that the 19th century was the veritable pinnacle of cultural and intellectual achievement, producing, as he had claimed many times, many of the greatest music composers, architects, poets, painters, and sculptors the world had ever seen. However, avant-garde artists did not continue on this path of cultural “greatness” set out before them by these 19th-century masters. The rise of modern art saw this reality come to a screeching halt when artists explosively broke away from the constrictions of artistic tradition and ventured on a new, revolutionary path.

Entartete Kunst: The Exhibition of Hate

The Entartete Kunst exhibition has gone down in art history as a nefarious attempt to ridicule modern art and discredit any artistic talent of the avant-garde individuals who participated in its creation. More than that, the Nazi regime explicitly drew a direct link between modernist stylistic tendencies and mental illness and “societal dysfunction.” This meant that Hitler and his totalitarian regime effectively weaponized art to propagate a message of xenophobia, antisemitism, racism, and hate.

The Degenerate Art project effectively highlighted the power of modern art both as an artistic movement and an idea. Modern art always called for freedom of thought and freedom in art. Ultimately, Hitler despised the idea of an artistic movement that could stand as the ideal of communication to oneself and one’s community because it lay promises of an emancipated people that, uninhibited, could explore their own humanity.

By Despoina TsoliBachelor of Arts w/ cultural analysis concentrationDespoina is a curator who graduated with a degree in Literary and Cultural Analysis from the University of Amsterdam. Anything regarding art, archeology, and mythology will spark her interest although she is known to also heavily enjoy an exhilarating book and good board game.