From exiled prince to President of the Second Republic and finally restorer of the French Empire, the story of Louis-Napoleon Bonaparte, future Emperor, is an odyssey of its own. 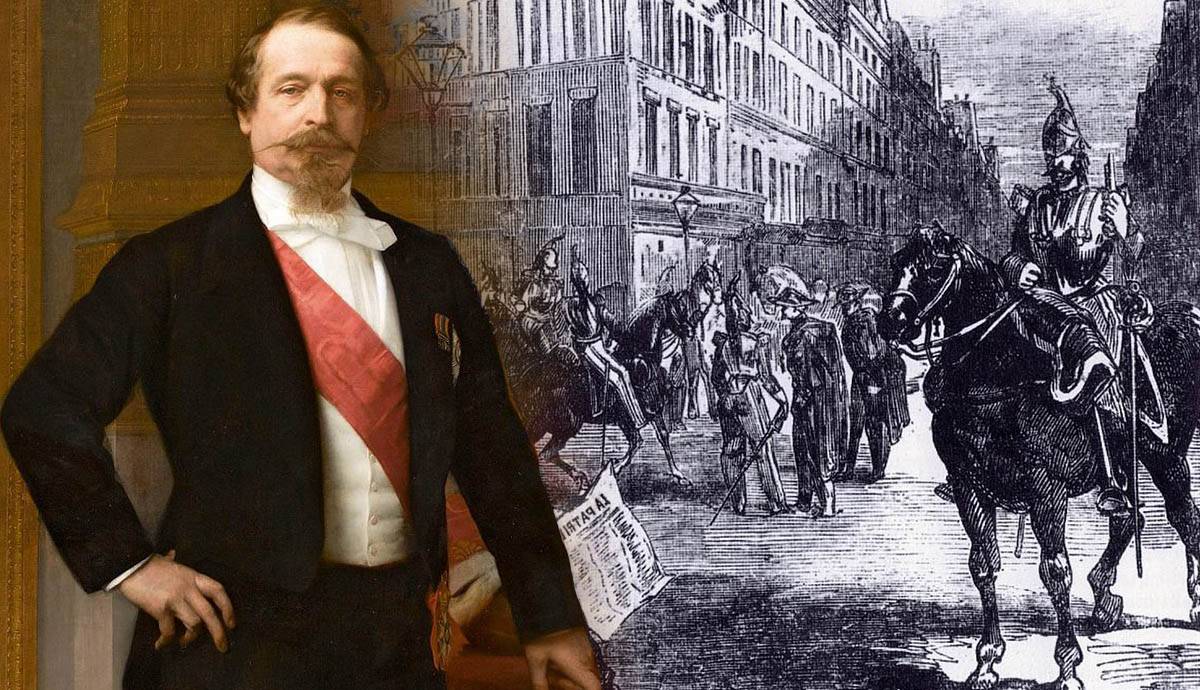 This article is the first part in a two-part series. Click here to read Part 2: Napoleon III: The Second French Empire.

Everyone knows the story of Napoleon Bonaparte, the French Revolutionary hero, emperor, and conqueror. Napoleon I left a significant footprint on history that would be undoubtedly remembered for centuries to come. Napoleon I was also famous for his failures, such as the Russian Campaign of 1812 and the Battle of Waterloo. But one of his lesser-known shortcomings is the attempt to establish a dynasty. At the peak of his power, Napoleon gave princely titles to most of his brothers, even appointing them as kings of conquered territories such as Spain and Holland. The latter was the realm of Napoleon’s younger brother, Louis, whose son was born on 19th April 1808 and named Charles-Louis-Napoleon, often shortened to Louis-Napoleon, to honor his Emperor and head of the family.

Napoleon I and his wife Empress Marie-Louise, daughter of Francis II of Austria, became the child’s godparents. In 1810, when Louis Bonaparte was ordered to abandon his crown and return to France, the young Louis-Napoleon Bonaparte quickly became one of the Emperor’s favorite nephews, often spoiled, taken to official meetings, and generally treated kindly by the royal couple.

But what seemed like a peaceful and privileged princely life was cut short following Napoleon’s first exile in 1814 and second after the Battle of Waterloo in 1815. The young prince was forced into exile alongside his parents. Europe forgot the very existence of one Charles-Louis-Napoleon Bonaparte.

Following the restoration of the Bourbon dynasty in 1815, the Bonaparte family went to exile in different parts of the world. Some fled to the Americas, others to various European countries. Meanwhile, Louis-Napoleon followed his family to Germany, then to Switzerland. During his youth, the exiled prince was tutored by Philippe Le Bas, son of Philippe-François-Joseph Le Bas, prominent revolutionary and close friend of the infamous Robespierre. The young prince was raised hearing glorious stories about his imperial uncle and radical anti-monarchist revolutionary ideas.

When he was 15, the family moved to Rome, where the young prince befriended François-René Chateaubriand, French author and ambassador of Paris in Genoa. The latter had a massive influence and impression on Louis-Napoleon. Thanks to him, the exiled prince saw the limits of his radical revolutionary ideas and developed a solid affinity for romantic literature.

In the late 1820s, Louis-Napoleon, alongside his elder brother Napoleon-Louis, joined the Carbonari, an organization whose aim was to dislodge Habsburg domination over Italy. In 1831, Austrian and Papal forces launched a successful offensive against the rebels, forcing the two Bonaparte brothers to flee. Shortly after, Napoleon-Louis died from measles.

In April, Louis-Napoleon Bonaparte and his mother moved to Paris, adopting the family name Hamilton to avoid any suspicion. One year before Bonaparte’s arrival, the Bourbon monarchy was overthrown for the final time during the Revolution of July 1830 and replaced by the “July Monarchy,” a Royal Constitutional regime led by Louis-Philippe of Orleans. The latter was far more liberal than his Bourbon cousins and thus tolerated the Bonaparte’s stay as long as they remained discreet. However, the mere presence of a relative of Napoleon I was enough to steer a vast popular movement nationwide.

Bonapartism: The Backbone to the Rise of Louis-Napoleon

The real identity of the “Hamiltons” eventually leaked to the population, and in May 1831, a public demonstration of mourning for Emperor Napoleon I took place in front of their residence. Some participants even called for the return to the throne of the exiled Napoleon II. Following this event, King Louis-Philippe I demanded that the family leave France to avoid further unrest. The Bonapartes moved back to Switzerland.

Following his defeat, Napoleon I left many supporters in the French army and the general population. They were gathered under the banner of Bonapartism, an ideology that suggests that power should be centered on the leader of the House of Bonaparte, who would rule as a benevolent monarch, implementing policies similar to modern socialism.

Bonapartist support never wavered despite the years of exile. The lack of persecution against the family of Napoleon I was, in fact, linked to the risk of major mutiny among French soldiers and the population. These supporters were the backbone of the July Revolution of 1830 and wielded significant political power.

Back in Switzerland, Louis-Napoleon Bonaparte enrolled in the Swiss Army and became an artillery officer. During his stay, he wrote numerous books about his political ideas that outlined the basis of Bonapartism.

Meanwhile in France, King Louis-Philippe’s popularity dropped significantly, as the promises of the 1830 Revolution were far from being delivered. A popular uprising was violently repressed in 1832, and more social unrest seemed to grow. The monarch managed to reconcile the French nobility with the bourgeoisie, but in doing so, he created a new social system based on revenue and ownership, and the poorest classes were left behind.

In 1836, Louis-Napoleon Bonaparte tried to take advantage of the situation. With the help of a high-ranking officer of the Strasbourg garrison, he managed to overwhelm the prefectural council of the city. However, they were quickly surrounded by loyal French troops. The prince was forced to flee back to Switzerland while his co-conspirators were arrested. To avoid another popular rally of Bonapartists, Louis-Philippe pardoned the conspirators and demanded to no avail that the Swiss authorities deliver the Bonapartes.

Napoleon voluntarily left Switzerland later to spare it any major diplomatic fall-out with Paris. He moved to the United Kingdom, before going on a tour of the Americas. In the summer of 1840, Louis-Napoleon attempted once again to stage a coup against King Louis-Philippe from the port of Boulogne on the English Channel. The endeavor ended in complete disaster, and the Prince was arrested and imprisoned at the fortress of Ham, near La Somme.

Louis-Napoleon Bonaparte remained imprisoned for six years before escaping in May 1846. He went back to the United Kingdom, and from there, organized the Bonapartist opposition against King Louis-Philippe I.

Discontentment against King Louis-Philippe grew to a boiling point in February 1848; Paris took to the streets once more. The National Guard refused to side with the king, leaving him no other option than to abdicate and leave the country. As Louis-Philippe was arriving in England, Louis-Napoleon Bonaparte was disembarking to France…

On the 24th of February, the liberal leaders of the revolution proclaimed the creation of the Second Republic. A provisional government quickly established itself and prepared elections.

However, the unrest was far from over. The working class rose up in revolt in the north of France due to the lack of available jobs, persecuting Belgian workers established in the region. In the meantime, the radical republican leaders of the revolution were strongly disappointed by the results of the first elections. Conservative parties, supported by the country’s rural areas, quickly overran the National Assembly.

Conservatives and progressives kept on clashing in the streets of Paris until June, when the army took the side of the conservative government and violently crushed the opposition. Legislative elections were quickly organized, and Louis-Napoleon Bonaparte obtained a seat in the Assembly.

The newly elected body quickly established a new constitution, and presidential elections took place in December 1848. Napoleon presented himself as a center candidate, conservative enough to please the rural masses but representing revolutionary ideals through his name.

Louis-Napoleon Bonaparte won the presidential election by a major landslide, with a large majority of 74.3%. But the Assembly was dominated by the Conservative Party of Order and by the Socialists and Radical Republicans. In June 1849, the radicals unsuccessfully attempted to violently seize power and were expelled for years to come from French institutions.

The Coup of December 1851: The Final Rise of Louis-Napoleon Bonaparte

As president, Napoleon vehemently opposed the Assembly, often using his powers to limit theirs. Following his uncle’s model, Louis-Napoleon wore the uniform of a general of the National Guard and called himself “Prince-President.” This was seen as anti-republican by many Representatives. During the French intervention of 1849 to support the freshly established Roman Republic in Italy, the future emperor ordered his troops to change sides and support the Pope. This gained him the support of the conservative French rural world but further widened the rift with the Assembly.

In order to limit his power, the Representatives tried to introduce reforms that would take out Louis-Napoleon’s support. They introduced a law restricting electoral rights to French male citizens with more than three years of residency in France, barring 3.5 million out of 9 million potential voters. This decision was widely unpopular among the population. In addition, the Prince-President attempted to run for a second mandate, but he was unable to gather the necessary support.

But the coup de grace came from the army. Officers and soldiers alike firmly stood behind Louis-Napoleon, as he represented one of the proudest moments of French history. On the night of the 2nd of December, French soldiers occupied Paris, overthrowing the Republic in a bloody coup. Some Republicans attempted to resist, but they were ruthlessly crushed. Once more, the streets of Paris were painted in blood as a new regime emerged.