After the Coup of December 1851, Louis-Napoleon Bonaparte instituted the Second French Empire, and became Emperor Napoleon III. This new empire had its own share of successes and shortcomings. 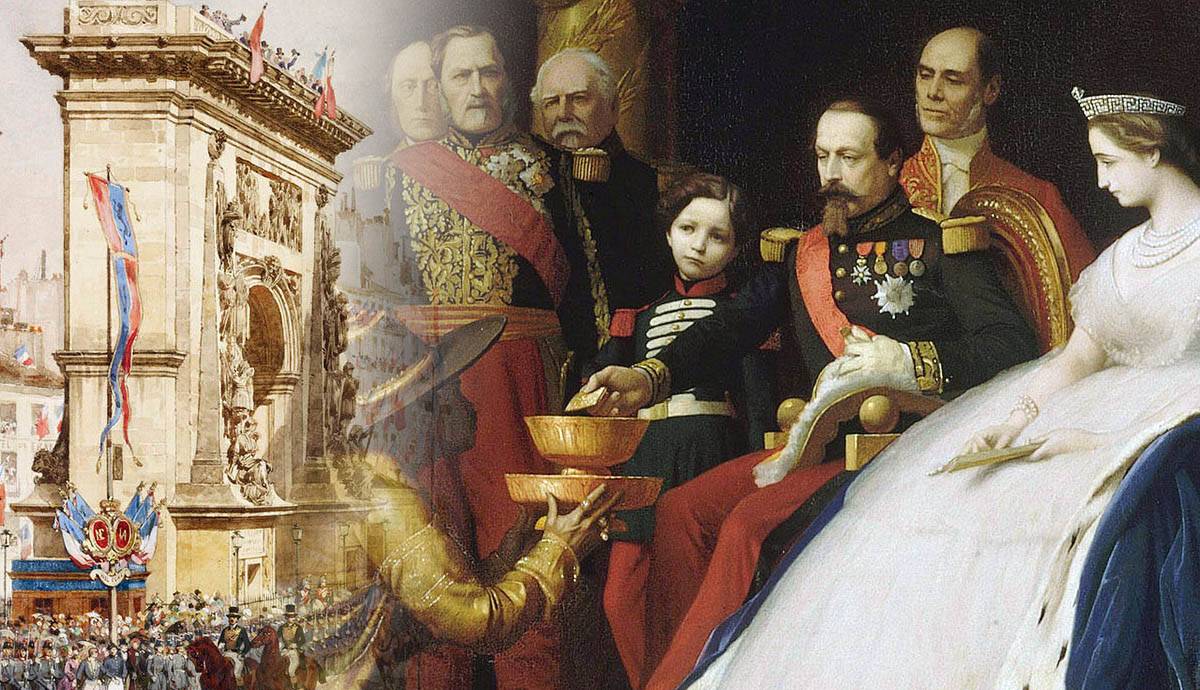 This article is the second part in a two-part series. Click here to read Part 1: Napoleon III: The Second French Empire.

Louis-Napoleon’s trials and tribulations towards absolute rule were finally over. Following the bloody coup of December 1851, the “Prince-President” progressively gathered all power in his hands, using wit and force to push his opponents out of the political compass, and rise up as the sole ruler of France, emperor of the Second French Empire.

During his reign, Emperor Napoleon III made France a force to be reckoned with among other European nations; he expanded the French Colonial Empire and ultimately guided the country into an era of economic and social prosperity. However, his rule was also marked by significant shortcomings within foreign policy and internal political unity.

The Birth of the Second French Empire

Following the Coup of December 1851, Louis-Napoleon implemented authoritarian measures to suppress his opposition. Censorship of the press was re-enacted; all political opinions had to be submitted to the authorities before being published. In February, a new election was held, which saw the rise of a dominantly Bonapartist Assembly, which supported the Prince-President in all of his endeavors.

In addition, Louis-Napoleon Bonaparte held a plebiscite to legitimize his hold on power, declaring himself president for ten renewable years and banning symbols of republicanism from schools and universities. In addition, the House of Orléans, relatives of the late king Louis-Philippe I, was exiled from the country.  Louis-Napoleon spent 1852 consolidating his power and crushing various opposition movements: Royalists, Republicans, Socialists. All were put aside, and a new constitution that gave immense power to the president was established.

On 9 October 1852, Louis-Napoleon Bonaparte made his famous speech in Bordeaux, where he proclaimed that “the Empire is Peace.” He promised that a revival of the French Empire would not signify an agenda of expansionism like that of his uncle before but an opportunity to modernize France by hastening its industrialization and improving its infrastructure.

In late November, a new plebiscite was held, the result of which made Louis-Napoleon Emperor. Thus began the reign of Napoleon III. The Constitution was retained; the notion of President was replaced by “Emperor,” and the right of rule was established on a hereditary basis. The National Assembly was kept, but its power was severely diminished. The Second Republic died with a whimper, and the Second French Empire announced itself with fanfare.

Despite the strictly authoritarian nature of his regime, Emperor Napoleon III kept most of his promises. On many aspects, he was loyal to the ideology of Bonapartism as he himself had outlined it in his youth. He was an authoritarian ruler, implementing policies for the common interest.

Due to the continuous social unrest, France had progressively fallen behind other European nations in economy and industrialization. In addition, Paris lost much of its foreign influence with the United Kingdom, Austria, and Russia.

The Empire had to face many challenges, and Napoleon was up for the task. Starting in 1852, the Bonaparte monarch introduced the banking system and supervised the creation of the first French banks. These structures permitted him to modernize the French economy and gave the Emperor the needed funds for his other reforms.

Thus, the Second French Empire had an excellent financial income due to the freshly-established banking system and effective foreign trade policies inherited from Louis-Philippe’s era. In addition, the steady birth rate that took place from 1815 to 1830 provided the country with a young and able population. Therefore, Emperor Napoleon III had all the needed elements for his ambitious reforms.

One of the main structural projects of Napoleon III was the extension of the French railway. From 1852 to 1870, the rail network grew from 3,500 kilometers to 20,000 total kilometers. The development of transportation infrastructure pushed for more investment in French industry, and progressively, coil, steel, and various factories proliferated all around the nation.

The Reconstruction of Paris & the Development of Seamanship

Emperor Napoleon III’s second major project was the reconstruction and innovation of Paris. The city was already a major European center of culture, but under Napoleon III’s reign, the French capital truly lived up to its nickname: the City of Lights. The Emperor ordered the reconstruction of the main roads and avenues and the development of the very first department stores. Emperor Napoleon III also strongly contributed to Paris’ cultural life. He ordered the construction of the Opera Palace and personally funded numerous cultural projects. Under his reign, Paris flourished and regained its place as the capital of culture and enlightenment.

The Emperor also sponsored the modernization of French sea trade. France bought and constructed new steamships to compete with British and American fleets. The seaports of Le Havre on the Atlantic and Marseille on the Mediterranean were modernized, thus empowering the French position as an essential world trade station. Soon, France regained its status as a significant global power and was ready to expand its influence beyond borders.

One of Napoleon III’s first actions as absolute ruler of France was to ally with Queen Victoria’s Great Britain. Together, alongside the Ottomans, they defeated Russia during the Crimean War allowing France to gain guardianship of the Christian populations living under the Sultan’s rule.

During the peace talks, the Emperor ensured that Russia did not suffer catastrophic consequences due to the defeat. By doing so, he managed to progressively build friendly ties with the tsar that would go well beyond his reign. This was one of Napoleon III’s first moves in his anti-Austrian policy, which consisted of isolating and encircling the Habsburg Empire in order to snatch away its influence over the Germanic States and Italy.

In order to further limit Austrian influence and create a buffer zone between France and Vienna, Napoleon III fervently supported Italian independence and unification. Paris already disposed of a strong alliance with the Kingdom of Piedmont-Sardinia, ruled by the House of Savoy, who was Napoleon’s candidate to rule a unified Italian State.

The Emperor’s support of the King of Sardinia, Victor Emmanuel II, started in 1855. In April 1859, when Austria declared war on Piedmont-Sardinia and accused the small kingdom of threatening Vienna’s interests in the region, France decisively intervened on its ally’s behalf.

The French armies marched into Italy and inflicted several defeats on the Austrian troops at the battles of Magenta and Solferino. The exceptional brutality of the fighting pushed both the French and Austrian Emperors to sign a peace treaty on 11 July 1859. The Habsburgs officially recognized Italian independence under Victor Emmanuel II while keeping Venetia and the surrounding region under their thumb.

When Emperor Napoleon III ascended to power, France already had some territories overseas. Paris had possessions in the Antilles, Western Africa (modern-day Senegal and surrounding territories), and Algeria more famously. The latter was snatched from the Ottomans in 1830 and paved the way for a new French colonial era.

One of the Emperor’s main challenges was to fully pacify Algeria. From 1830 to 1847, local populations violently opposed French rule, gathering behind the charismatic leader Abdelkader El Djezairi. The latter’s defeat and imprisonment broke apart the armed resistance against France, but animosity towards French rule remained strong.

In order to pacify the local population, Emperor Napoleon III freed the defeated Prince and befriended him, and also banished anti-Muslim policies during the remainder of his rule. The friendly relationship between the emperor and the prince would continue until Napoleon’s death. It would help improve relationships between Muslims and Christians in the Middle East and North Africa.

During the Second French Empire, France also managed to establish control over Cochinchina, modern-day Vietnam. This would be the stepping stone of the future colony of Indochina.

However, the Emperor’s overseas policy also had its shortcomings. In 1862, he sent troops to Mexico to support the local imperial claimant Maximilian I. The latter was faced with resistance from the republicans led by President Benito Juarez. Successful at first, Emperor Napoleon III had to completely abandon his Mexican designs by 1866 as the United States, fresh from a Civil War, clearly opposed France’s interests in the region. The French retreat was followed by the total defeat of imperial Mexican forces.

Despite the undeniable efficiency of Napoleon III’s reforms, the Second French Empire was not popular among all. As a matter of fact, royalists considered Emperor Napoleon III a usurper, and the republicans despised his authoritarian ways. But no one dared to defy imperial rule from the streets of Paris or in the countryside because the Emperor’s enforcers crushed with ease every form of civil disobedience.

However, the opposition’s opportunity eventually came. The Second French Empire did not fall because of a popular uprising against Napoleon, but due to a disastrous conflict that has marked France ever since.

On 18 June 1870, France and Prussia declared war on each other over influence of the German States. At first, it was apparent that Emperor Napoleon III strongly underestimated the military and diplomatic abilities of Berlin and its chancellor, Otto von Bismarck.

An army led by the Emperor himself was swiftly defeated at the Battle of Sedan in the east, with Napoleon III being taken into captivity. What followed was a complete disaster for France: the opposition quickly occupied the sudden power vacuum, proclaiming the Third French Republic, the monarch abdicated, and Paris had to abandon large parts of its eastern territories to a newly-proclaimed German Empire. The bloody episode of the Paris Commune followed, which marked French history for centuries to come.

Napoleon III then moved to Great Britain, where he remained until his death in 1873. His impact on France is still felt today, especially in Paris, where nearly every corner of the city was built up under his reign.

Despite his many shortcomings, Napoleon III remains nonetheless an important ruler in French history, whose policies greatly contributed to the modernization of the country and its international prestige.