Oedipus Rex: A Detailed Breakdown of the Myth (Story & Summary)

Oedipus Rex was the unfortunate protagonist who took part in one of the greatest tragedies of Greek mythology. 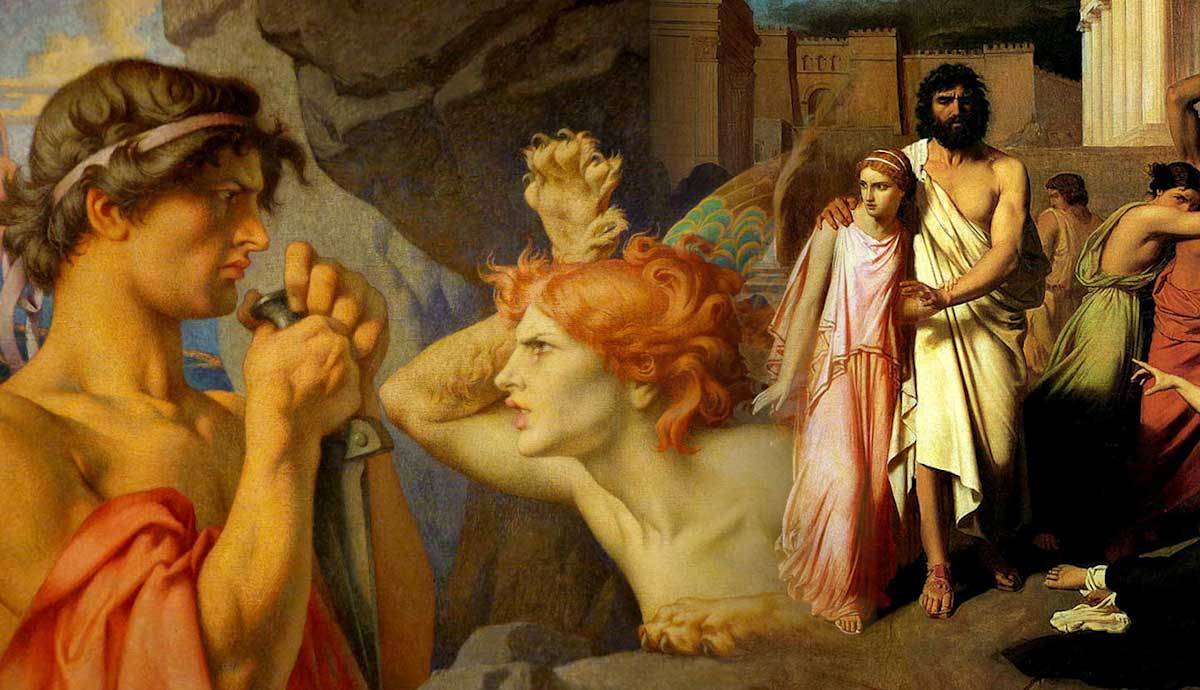 If there was ever a story about inescapable fate, the myth of Oedipus Rex is the original demonstration. The myth begins with a prophecy, and the attempt to escape it, and finally its inevitable manifestation. Fate, to the ancient Greeks, was an unavoidable concept. While prophecies were open to interpretation and could turn out in different ways, they would always, always, come about in some way.

Fate and Birth are two concepts that were intertwined in ancient Greek culture. The Greeks believed that when one was born, their soul was set for a particular destiny. The three Greek Fates or Moirai, represented this idea of destiny. Together these goddesses weaved a thread of fate for each life when a human was born.

The thread represented the path, destiny, and life of a person. The Fates (Moirai) would determine what events would happen in each thread. There was agency, of course, but the key events of a life would remain the same, no matter the choices that were made to lead the person to that point. The Moirai would then cut the thread at the point when the person would die.

For Oedipus Rex, his string of Fate had some terrors woven into it. When he was born, his parents were told a prophecy that their son would grow up to kill his father, Laius. Laius and his wife Jocasta were the King and Queen of Thebes. Horrified at this prophecy of patricide, the parents decided to abandon the baby.

In ancient Greek culture, the act of “exposure” involved leaving a baby in a remote location and letting nature decide whether the baby would survive or not. This was a way of avoiding the outright killing a child while still removing the baby from the family. Oedipus Rex himself, was left in the bough of a tree.

Saved by the Shepherd

However, Oedipus was not fated by the Moirai to die in the high mountains of Greece. The shepherd who had been ordered to expose the baby did not have the heart to do it. Instead, he took the baby from the tree. Then, he gave the baby to a messenger, who then took the baby to the nearby Kingdom of Corinth. Coincidentally, the King and Queen there were wanting to adopt a child, and so they took in Oedipus. The identity of Oedipus was to remain a secret, even to his adoptive parents. Even the shepherd had not known whom he was to expose!

The myth of Oedipus is recorded in Sophocles’ play Oedipus the King. In the play, the shepherd tells of his pity for the abandoned baby and his hope of saving him. Yet, the shepherd later is horrified at the fallout: how the saving of a child created a dreadfully disastrous future…

I thought the man [messenger] would save him to some dim

And distant land, beyond all fear…. And he,

To worse than death, did save him!… Verily,

If thou art he whom this man telleth of,

Oedipus Rex and the First Mistake

When Oedipus had grown into a young man, he soon heard of a prophecy about himself… He was fated to kill his father, and then marry his mother. Oedipus, wishing to avoid this fate at all costs, decided to leave Corinth. He still did not know, however, that the King and Queen of Corinth were not in fact his biological parents.

On the road, Oedipus got into a violent spat with another traveler. A form of ancient road rage, if you will. Oedipus killed the traveler, and continued his journey. Unbeknownst to him, Oedipus had just fulfilled the first part of the prophecy and killed his true biological father. For indeed, Laius was the traveler.

Thebes and the Sphinx

Oedipus’ travels eventually took him to Thebes. Thebes was being plagued by a bloodthirsty Sphinx. This Sphinx had been killing the people of Thebes randomly and spouting violent riddles of death. If you could not answer the riddle correctly, you would be devoured by the Sphinx.

King Laius had been on the road to Delphi, where a famous Oracle took up residence. The Oracle would have had the power to advise and help the King of Thebes with his problem. However, Laius had been killed by Oedipus on the way.

And now, Oedipus came to Thebes. There, the people were mourning their king, who had “been killed by robbers”. They were also still being terrorized by the Sphinx. Oedipus, a young prince of Corinth, offered to face the Sphinx and try to solve the riddle.

Oedipus Rex and the Sphinx

When Oedipus did face the Sphinx, he was given a clever puzzle:

The Sphinx asked, “What walks on four feet in the morning, two in the afternoon and three at night?”

And Oedipus answered: “Man: as an infant, he crawls on all fours; as an adult, he walks on two legs and; in old age, he uses a walking stick”.

Oedipus was correct! And so the Sphinx killed herself. Returning to the palace, Oedipus showed his sympathy for the mourning Queen Jocasta, who had just lost her husband. However, Oedipus’ success in ridding Thebes of the monster had given him the right to marry Jocasta as a Theban prize for defeating the Sphinx. And so, part two was complete. Oedipus had just married his biological mother. Prophecy complete…

The Curse on the Family

Oedipus and Jocasta had four children together. Two daughters, whose names were Antigone and Ismene and two sons, whose names were Eteocles and Polynices. Oedipus’ family had their fair share of disasters, but it all stemmed from a curse on Laius. Eteocles and Polynices were to become bitter enemies and tear the city apart in a civil war, and Antigone would end her own life in a defiant, rebellious move against the state.

Laius, the father of Oedipus and first husband of Jocasta, had made some bad choices in his early years as a young man. These actions caused a curse to be placed upon Laius and his descendants. Laius had two brothers, and not much is known about Laius’ mother, but his father, Labdacus, was King of Thebes. Labdacus died when his sons were very young, and so Lycus became their guardian and also the regent of Thebes.

However, Laius’ brothers resented the regent, and so they killed him. After the attack, the city was very divided, but Laius was protected by some of the Thebans, and so he was taken to King Pelops in the Peloponnese. Here, Laius grew up under the care of Pelops and his family. However, when Laius was a young man he raped Pelops’ son, Chrysippus, and he was turned out of Pelops’ home for his crime.

When Laius returned to Thebes, his brothers had died, so he was able to take back the throne of Thebes. His return home would be plagued by his past crime… for the gods did not forget about his crime against Chrysippus and Pelops’ family. Laius was cursed. And so was his family.

After Oedipus had married his mother and had children with her, it was a long time until the truth about their biological relationship was revealed to them.

Thebes, the city and its people, were troubled yet again. A plague was ravishing its way through the city, and the people were dying. The people turned to the Oracle to help them, and the Oracle said that they must find the murderer of Laius and punish him. The punishment would end the plague.

Oedipus immediately summoned the blind prophet named Tiresias to court. However, Tiresias was at first reluctant to give any advice. Eventually, Tiresias accused Oedipus of killing Laius and he prophesized that Oedipus would become blind and experience much suffering.

“I fear thee not; nor will I go before

That word be spoken which I came to speak.

How canst thou ever touch me?—Thou dost seek

With threats and loud proclaim the man whose hand

Here. He is called a stranger, but these days

Shall prove him Theban true, nor shall he praise

His birthright. Blind, who once had seeing eyes,

Beggared, who once had riches, in strange guise,

His staff groping before him, he shall crawl

O’er unknown earth, and voices round him call:

‘Behold the brother-father of his own

Children, the seed, the sower and the sown,

Shame to his mother’s blood, and to his sire

Jocasta, the wife (and mother) of Oedipus Rex, at first told Oedipus to ignore the “mad ravings” of the prophet, but then she tells Oedipus about the prophecy about her son who was fated to kill his father and marry his mother. She hopes these words will comfort Oedipus, but in fact they have the opposite effect. Oedipus slowly comes to realize the truth…

A messenger brings Oedipus Rex the news that his “father” in Corinth has died, but not to worry, the messenger says, because he was not in fact your true father! The news meant to bring comfort to Oedipus instead sends him into a pit of despair and horror.

The final step was to find the shepherd who was ordered to expose Jocasta’s baby. Under much interrogation he reveals that Oedipus is in fact Jocasta’s son. Having the entire story they could now see the truth.

Jocasta could not live with the truth, and so she took her own life. Oedipus decided to inflict punishment on himself to protect the people of Thebes and he gouged his own eyes out. The end of Sophocles’ play was indeed gruesome.

The Chorus of the play comment on the tragic fate of Oedipus.

“But now, what man’s story is such bitterness to speak?

What life hath Delusion so visited, and Pain,

And swiftness of Disaster?

How oped the one haven to the slayer and the slain?”

The Tragic Story of Oedipus Rex Told Through 13 Artworks

The Pythia of Delphi: Ancient Greek Religion’s Most Powerful Woman