The sphinx is the emblem of ancient Egyptian culture. However, it was also a key image in Ancient Greece. 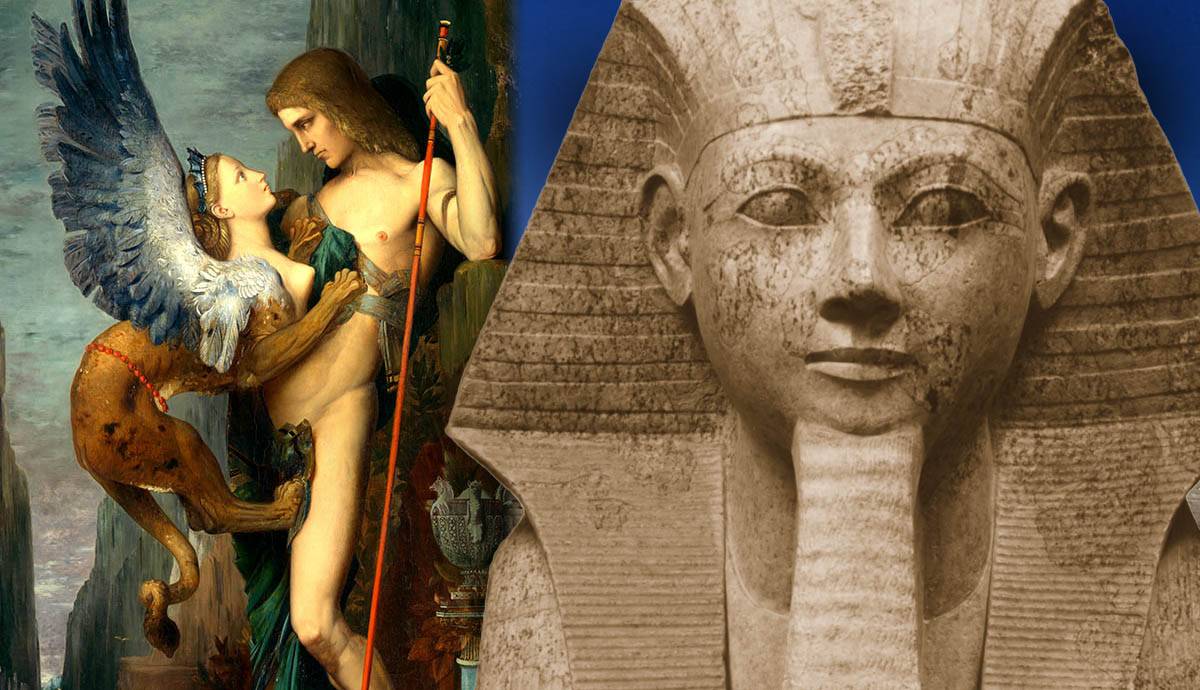 When we think of ancient Egypt, what springs to mind are pyramids, pharaohs, and the sphinx. But although the sphinx is lodged in with our modern ideas of Egypt, in antiquity its prevalence was spread across the ancient world. Sphinxes can be found in ancient Greece, Babylon, Persia, and even East Asia. Some have wings, some are female, others bear snake-like tails, but all share the basic feline body and humanoid face. By far, the most prevalent depictions are found in ancient Egypt and Greece, and that is where we shall be focusing.

The Sphinx of Egypt

Ask someone to draw a sphinx, and 9 out of 10 times, you will get the Egyptian version. The human face, surrounded by the Pharaonic headdress and a lion’s body. As you can see in the picture of the Sphinx of Memphis, sphinxes in Egypt were depicted with false beards that indicated royal rank and divine status.

The sphinx has existed in Egyptian mythology since at least 2575 BCE, but potentially before that as well. The oldest known example is the Great Sphinx standing outside the Great Pyramid of Khufu. Built by Khufu’s son, Khafre, its face was carved in his likeness. This set the standard for future depictions of the sphinx. From Rameses the Great in Memphis to Hatshepsut, the female pharaoh, they served as portraits of their commissioners.

For the Egyptians, the sphinx was a protector. Built to guard royalty, it was often found near royal burials and temple entrances. It was associated with the hawk-headed, sun god Ra (or Re), and as such, was a creature of good. Ra, the King of the Gods, but also the Godly father of the Pharaoh, was a key component to the pharaoh’s power on earth. Sphinxes by this association defended against evil, fighting Ra’s enemies, the literal forces of darkness.

As with many ancient statues, sphinxes would have been painted. There is evidence that the Great Sphinx was painted red, with its headdress painted in yellow and blue. Imagining the monument in all its gaudy splendor helps us understand the impact it had on the ancient world.

Why Was the Great Sphinx Placed in Front of the Great Pyramid?

The reason the Great Sphinx was placed in front of the Great Pyramid is not crystal clear. Mark Lehner, a renowned Egyptologist, discovered evidence that the temple of the Great Sphinx was built in line with the Great Pyramid and the Pyramid of Khafre to line up with the summer equinox. This would further highlight the link between the sphinx and the sun god. Dr. Zahi Hawass further proposed that the Great Sphinx’s and Khafre’s pyramid positioning was a way of presenting Khafre as Horus giving offerings to his father, who has become one with Ra. Lehner concurred that:

“Even if coincidental, it is hard to imagine the Egyptians not seeing this ideogram, if somehow intentional, it ranks as an example of architectural illusionism on a grand, maybe the grandest, scale.”

The Name of the Sphinx

The origin of the sphinx is still up for debate. Our understanding of what it meant to the Egyptians comes from the stone tablet known as the Dream Stele between the Great Sphinx’s paws. However, this was placed roughly 1000 years after its creation by Pharaoh Thutmose IV. He unburied the tablet after he had a dream where a sphinx promised him help to become Pharaoh. In the dream, the monster revealed that its name was Horemakhet, meaning ‘Horus on the Horizon’. Horus, the son of Isis and Osiris, the first Pharaoh, was another key god linked to the sun. His right eye was the sun, and his left eye was the moon.

As for Horemakhet, he was a god who represented the dawn and was often depicted as a sphinx. Again though, this attribution is from long after the Great Sphinx’s creation. Whether this was a development of previous mythology or a unique stance is yet unknown. However, there is some evidence that it might represent Ruti (or Aker), the double-headed lion that guarded the Egyptian underworld.

If there were other myths about sphinxes predating the Great Sphinx, these are today lost. Similarly, what the Egyptians called the mythical species, is not recorded. The name itself comes from Greek either as an adaptation of the name ‘Phix’, the way Hesiod—the Greek poet—called the creature, or derived from sphingein, meaning “to bind” or “to squeeze”.

What about the Riddle?

The idea of the sphinx as a creature that loves puzzles and guarding hoards of treasure is a common one today. From Harry Potter to Hollywood movies such as Gods of Egypt, the mythical creature is there to pose a threat and baffle with its riddles.

But this impression is not Egyptian at all: it’s Greek. In the story of Oedipus, the Sphinx acts as a gatekeeper sent by the gods to the city of Thebes to ask any passer-by a riddle. With a correct answer, you pass and the Sphinx dies. With a wrong one, she gets to eat you. The riddle follows:

“Which creature has one voice and yet becomes four-footed and two-footed and three-footed?”

Oedipus answered correctly that the creature is a human. At birth, a human crawls. As they grow, they walk on two legs. As they age, they use a stick. Depending on the story’s version, the monster throws herself to her death or is killed by Oedipus.

The Differences between Greek and Egyptian Sphinxes

Although the sphinx originated in Egypt, as it spread to Greece and Asia, it changed meaning and appearance. From the protective spirit of the ancient Egyptians, it became a dangerous monster.

In Greek Myth, the Sphinx was the daughter of Orthus (a monster dog with two heads) and Echidna (half woman, half snake) or even Chimera (composite creature: lion, goat, and snake). The Greek version bears a similarity in personality and monstrousness to its sister mythical female creatures, the Chimera and the Gorgons. Their stories have in common a shrieking female monster waylaying the male hero before being outwitted and killed. In this, therefore, the Greek sphinx fitted the mold of other Greek monsters. It was malicious, ruthless, and treacherous. In the accounts of poets such as Statius, the monstrous imagery focused on her claws and evil eyes, the latter also being an important aspect of the Gorgon Medusa.

Physically, what constituted the sphinx of Greece was not the same as that which constituted the one of Egypt. The latter had the body of a lion, almost always a human head (some later examples had the head of a ram), and were mostly male (unless they represented female Pharaohs, like Hatshepsut). The Greek version was always female and had the body of a feline with wings.

Why Are the Sphinxes of Egypt and Greece so Different?

It seems most likely that the sphinx as a concept originated in Egypt. In Greek mythology, the creature was said to come from Aethiopia, a rather vague geographic concept roughly corresponding to the upper Nile and the lands south of Egypt. So how did we get from the Egyptian version to the Greek one?

One possible answer is time. We tend to lump all of the ancient worlds into one homogeneous period, but Khafre’s Egypt was chronologically as far away from the time of Herodotus as Herodotus is to us! Indeed, so much time had passed since the Hellenistic Era that the Great Sphinx had been covered by sand up to its neck.

A natural evolution of ideas and concepts is to be expected within the span of 2,000 years. This evolution makes more sense in light of Egypt’s political condition during the Classical Greek period. When the story of Oedipus was being transcribed, Egypt was no longer an independent empire with the ability to impose and perpetuate its own culture, but a satrapy under Persian rule, with further internal strife.

A key impact of this Persian control was the increased difficulty of accessing the hieroglyphs’ knowledge. When around 454 BCE, Herodotus, the ancient Greek historian, traveled to Egypt, he wrote of the difficulty of finding someone able to translate the ‘sacred writings’ (i.e. the hieroglyphics). This means that even those Egyptians who were the Greeks’ contemporaries could not easily access the written record to recover the mythical creature’s original meaning. The Greek myth, fitting in with existing female monster mythology, was uncontested at that point.

Another issue is the xenophobic views of ancient Greeks for other cultures, which did not exclude the Egyptians. As we have already mentioned, Greek ideologies were steeped in broader views of ‘barbarism’ and stereotypes based on their perspective. Coupled with the difficulty of finding Egyptian accounts and the lack of interest in the original Egyptian myth, it makes sense that the Greeks did not reproduce the original sphinx of Egypt but fashioned their own version. 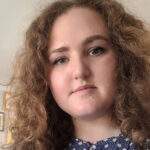 By Abigail RoseBA Ancient History and ArchaeologyAbigail has a BA in Archaeology and Ancient History from the University of Leicester and is still bitter that they only started digging up car parks in the search of Medieval kings when she left. Her special interests are the early Roman Empire, Roman settlement of Britain, and Medieval England. Abigail works in further education, sharing her passion for History with the next generation, as well as working as a Careers Advisor.

Oedipus Rex: A Detailed Breakdown of the Myth (Story & Summary)