Shocking, daring, and confrontational, Paula Rego’s art never fails to cause a sensation wherever it goes. Read on to examine the evolution of her art throughout the years. 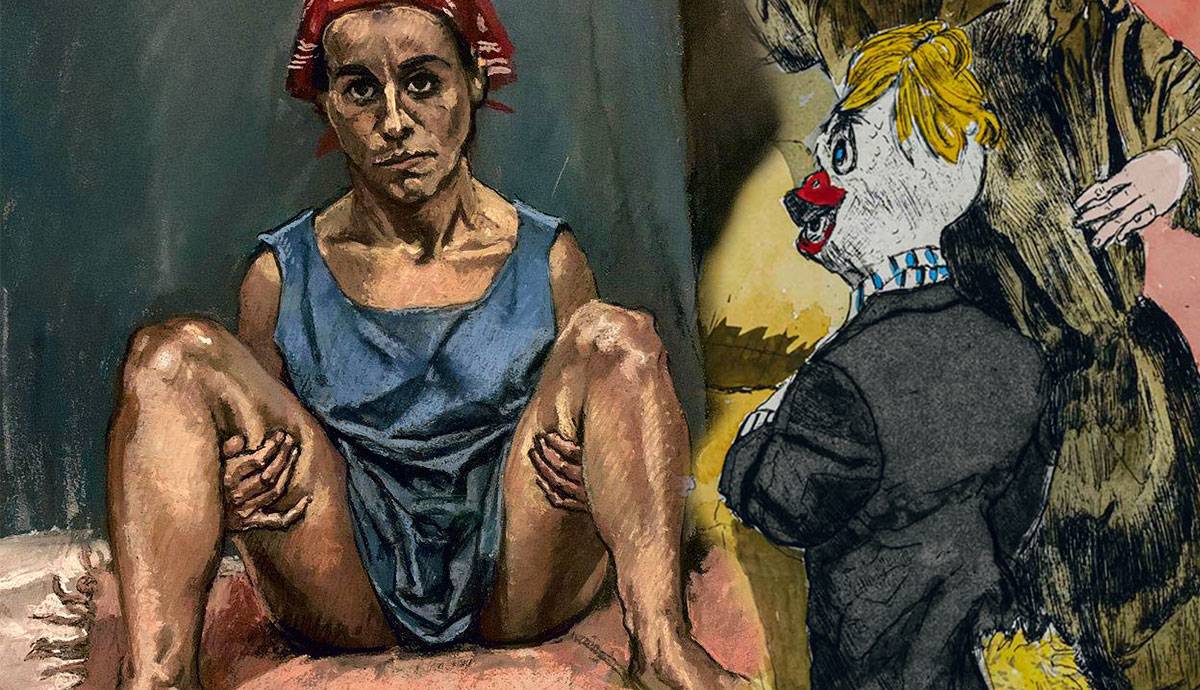 Paula Rego’s contemporary art cuts straight to the bone, jarring audiences with outrageously confrontational subjects that reflect the dark depths of human suffering and endurance. She weaves this subversive material with an aesthetic inspired by grim children’s stories and the folklore of her native Portugal, creating compellingly macabre images with an air of malaise that sometimes collapses into full horror. Much of Paula Rego’s most recent art is widely recognized today for its unflinching, searing commentary on feminist issues, exploring women’s bodies as symbols of oppression and violence, but also of incredible strength and defiance. In her impressive 70 year career, she has made an astonishingly vast archive of art that is now held in museums worldwide. Let’s take a look through the decades at the evolution of Paula Rego’s contemporary art practice and some of the most compelling artworks of her prolific career.

Born in Lisbon in 1935, Paula Rego was partially raised by her Portuguese grandparents, who first introduced her to gothic fairy tales, myths, and folklore. Filled with wickedly macabre gory details, they lit up her young imagination and would later spill out into her art. Much of her childhood was overshadowed by the Fascist leadership of António de Oliveira Salazar, and she was acutely aware of the troubled socio-political climate around her. Art became a powerful means of expressing her deeply felt anxieties and traumas, bringing them out into the open to ease their emotional impact. “If you put frightening things into a picture, then they can’t harm you,” she later reflected.

The early painting Interrogation, 1950, was made when Rego was just 15 years old, predicting the nature of her mature work with a probing analysis of the torture and imprisonment happening in Fascist Portugal. A young man’s body is in a painfully contorted tangle of inner anguish as two authoritarian figures ominously approach him from behind, holding weapons in their hands. In a bid to remove their daughter from the Fascist regime, Rego’s parents sent her to a finishing school in Kent, England, when she was 16 years old. From there, she moved on to study art at Slade School of Art in London, and in the years that followed, she became friendly with various leading artists. Rego was the only woman associated with the School of London painters alongside David Hockney, Lucien Freud, and Frank Auerbach. She also met her husband, the painter Victor Willing, with whom she would go on to have three children.

During the 1960s, Rego returned to Portugal with her family, and her contemporary art continued to reflect on troubling aspects of Portuguese politics. Her language was increasingly fragmented and elusive, mirroring the instabilities and uncertainties of a society in political turmoil. She made these images by drawing various figures, animals, and other forms onto sheets of paper before violently cutting them apart and arranging them as collaged elements on canvas. In The Firemen of Alijo, 1966, strange, monstrous creatures mingle with animals and people to form a tangled network of interrelated shapes that seem to float in space, echoing the early Surrealist work of Marcel Duchamp. Rego says the painting was loosely related to a group of poverty-stricken firemen she saw during the winter huddled together in groups with bare feet, black faces, and coats stuffed with straw. Her curious, surreal painting was made in homage to the magical bravery of these men, who worked tirelessly as unpaid volunteers to save lives.

From the 1970s onwards, Rego’s style shifted to a more realistic depiction of people and places painted straight onto canvas. However, the same haunting dislocated quality was invested in her art, achieved through distorted bodies and eerie, stark lighting effects. In the famous and ambitiously large painting The Dance, 1988, people seem to dance on a moonlit beach carelessly, yet the merriment of their bodies is undercut by the cold blue light and crisp, clear shadows around them.

Although Rego has left any direct meaning in the work unclear, some critics have suggested each dancing group relates to the various identity roles a woman might assume, from the independent solo figure on the left to the two coupled pairings, in which one woman is pregnant. On the right is a trio of women made of child, mother, and grandmother, suggesting the traditional role of women as child-bearers passed from one generation to the next. In this way, the painting can be compared with the haunted Symbolism of Edvard Munch.

Maria Manuel Lisboa, a specialist in Portuguese culture, believes the building in the distance of this painting is based on a military fort on the Estoril coast in Caxias, near where Rego was born. Used as a prison and torture site throughout Salazar’s rule, its dark, looming presence adds an additional layer of oppressive discomfort to the image, perhaps critiquing the restrictive nature of societal roles enforced on young women throughout the Fascist dictatorship.

Since the 1990s, Rego has explored a variety of powerful feminist themes that reflect on the complexities of modern female identity. Moving away from paint, she began working instead with pastels, a medium that allowed her to manipulate the material with her bare hands, a process she likens to sculpture rather than painting. Her women are strong, muscular, and sometimes overtly aggressive even in the face of suffering, undercutting the demure and submissive idealizations of the past.

This quality can be seen in the heroic Angel, 1998, which depicts an alternative saint, carrying a sword in one hand and a cleaning sponge in the other, staring us down with a look of unflinching confidence. In Paula Rego’s “Dog Woman” series of the same era, she explores how women can be likened to dogs – not in a submissive, derogatory way, but as a symbol of primal instinct and inner strength. She writes, “To be a dog woman is not necessarily to be downtrodden; that has very little to do with it. In these pictures, every woman’s a dog woman, not downtrodden, but powerful.” She adds, “To be bestial is good. It’s physical. Eating, snarling, all activities to do with sensation are positive. To picture a woman as a dog is utterly believable.”

Another equally subversive series from the same period is Rego’s harrowing “Abortion series,” made in 1998 when a referendum to legalize abortion in Portugal failed. Rego’s drawings focus on the plight of women forced to undergo illegal abortions in dirty, dangerous settings. She conveys them crouched like animals over old buckets, scrunched with knees raised in agony, or lying back with legs crudely held apart by metal chairs, emphasizing the brutality of their desperate situation.

Rego argues her series of drawings on the subject “…highlights the fear and pain and danger of an illegal abortion, which is what desperate women have always resorted to. It’s very wrong to criminalize women on top of everything else. Making abortions illegal is forcing women to the backstreet solution.” Such was the power of Rego’s message; her contemporary art is partially credited for swaying public opinion in a second referendum in 2007.

From the 2000s onward, Rego has explored darkly subversive material that is often inspired by fairy-tales, mythology, and religion. Her richly complex drawing War, 2003, combines animals, young girls, and toys, invoking the grim children’s stories of her own childhood, which often had gruesome or sinister overtones. Rego made this work in response to a harrowing photograph taken during the early stages of the Iraq war of a girl in a white dress seen running from an explosion. Her interpretation of children suffering in war is to imagine horror seen through the eyes of a child, with macabre blood-stained rabbit masks that haphazardly wobble on the children’s heads.

The surreal print Goat Girl mimics the style of traditional Victorian children’s books with loose washes of pale color and sketchy cross-hatching. Her print is loosely related to the Greek fairy-tale of the Goat Girl, who was born a goat but could remove her skin to become a beautiful woman. Rego relishes in the nature of a half-told story here, amplifying the uneasy visual effects with creepy angular bodies, a hybrid human-animal, and stark, gothic lighting that lends the scene an air of threatening menace.

With Paula Rego’s internationally successful career spanning nearly seven decades, it is perhaps no surprise that her impact on the development of contemporary art has been far-ranging. She has inspired artists from across the globe to explore how figurative painting and drawing can reflect on the most pressing socio-political issues of the day. Artists who have continued in her legacy include the British painter Jenny Saville, whose unflinching examination of voluptuous women’s bodies is as direct as they come, pressed close to the canvas and magnified to a monstrously huge scale. Like Rego, American painter Cecily Brown conveys unidealized, sexualized bodies that become meaty passages of expressive paint. South African artist Michael Armitage’s contemporary art paintings are also indebted to Rego, sharing the same fragmentary, displaced narrative and undercurrents of political unrest, created by layering personal and political references together into a richly complex tapestry of ideas.