David Hockney is one of the most influential living artists of the 20th century. He made his mark during the 1960s and continues to remain relevant today. 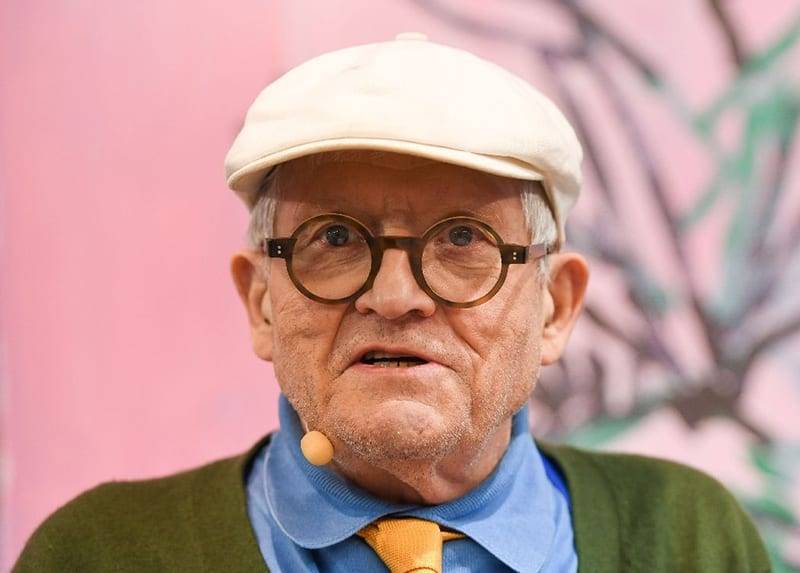 Born in Bradford, UK in 1937, David Hockney studied at the Royal College of Art in London under heavyweights such as Francis Bacon and Peter Blake. He was inspired early on by Pablo Picasso and Henri Matisse for their distinct yet varied styles. Here, we’re talking all things Hockney, including some of his favorite subjects, and how he stays relevant in the digital age.

1. David Hockney Lives Between the UK and California

Living between London and California offers two vastly different lifestyles. London is umbrellas, trench coats, and glistening cobblestone streets. By contrast, California is orange groves, clear blue skies, and tall palm trees. Both evoke beauty in their own ways and the variation meant that Hockney was able to absorb these contrasting influences.

Some of Hockney’s most well-known paintings are a series of swimming pools influenced by his California lifestyle while his lush landscape paintings were a result of the time he spent in London.

Many Pop artists were focused on consumerism and everyday items. For example, Andy Warhol was likely to create portraits of celebrities like Elvis or Marilyn Monroe and that was part of the appeal. It was pop culture crossing over to fine art. Hockney, however, did things a little differently. His Pop Art was about making art more accessible and fun. It’s why he used bright colors and bold shapes. He also liked to depict his close relationships with the real people in his life. They weren’t celebrities – but viewers resonated with the portraits just the same.

One of his most famous paintings is of his mum and dad, called My Parents, 1977. Using bright colors and giving an overall impression of love and familiarity, it’s certainly not what you’d expect from Pop Art. Still, it’s accessible and relatable and that’s what the movement was about. Other people featured in his paintings were the men he loved, friends he spent a lot of time with, and couples Hockney admired. For example, the artwork George Lawson and Wayne Sleep, 1972-5, is a glorious yet understated expression of love between two partners which Hockney felt compelled to share.

In the early 80s, Hockney started working with photography collage using Polaroids and 35mm processed color photos. He usually took photos of a single subject at different times of the day and using different perspectives to create one uniform image. For example, Pearblossom Highway, 1986, is comprised of over 700 separate photographs. He preferred this type of photography since he felt wide-lens shots that were becoming more popular at the time would come out looking distorted. He started joining narrowly focused photos together and found they told better stories than single shots. His photo collages were then born.

4. His Most Recent Work Is Made on an iPad

No – he’s not painting the actual device. Hockney uses programs within the iPad to create digital paintings, much like how illustrators at animation studios like Disney and Pixar create their animated movies and TV shows. One of the most interesting aspects of this new way of painting is the fact that you can see his process from start to finish. The painting gets saved as a digital copy and we’re able to watch the creation of his artworks like rewinding a tape. This not only helps art lovers enjoy the work in a new way, but it’s an incredible teaching tool as well.

Even in his 80s, Hockney has found a way to stay relevant in the art world using digital technology to tell stories and share his love of painting. With vibrant colors and a knack for storytelling through a still image, Hockney is a British treasure and, as art collectors, we’re lucky he’s still at work.

5. His Most Famous Motif is a Swimming Pool

Hockney has had a dual-city lifestyle for most of his career. His most famous motif, the swimming pool, came from Californian influences. The Splash, 1966, is the second of three variations on the swimming pool theme: the first being The Little Splash which remains in a private collection and the third, A Bigger Splash created in 1967. However, The Splash was painted in 1966 and according to Sotheby’s, “represents the apex of Hockney’s Californian fantasy.” The artist himself said: “Everyone knows a splash can’t be frozen in time, so when you see it like that in a painting it’s even more striking than in a photograph.” In The Splash, 1966, Hockney took formal and metaphorical techniques and created a unique piece of work. Today it is undoubtedly one of the most iconic Pop Art images of the 20th century.