How Did Roy Lichtenstein Make His Pop Art? 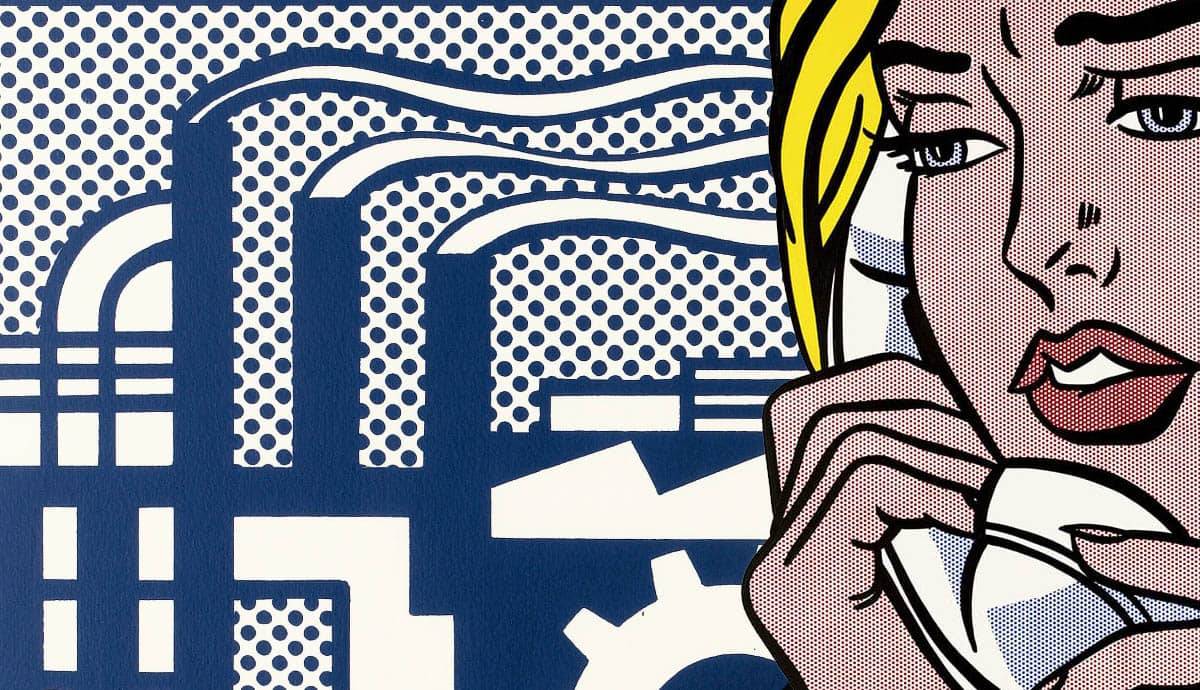 Roy Lichtenstein was the edgy and effortlessly cool Pop artist from New York who made enlarged comic strip scenes into paintings and prints. In all his artworks Lichtenstein aimed for an entirely machine-made aesthetic, with flat areas of unmodulated color and the tell-tale, ink-saving ‘Ben-Day’ dots used in comic book printing. He made his name in the 1960s with meticulously hand-rendered paintings made with a seamless, print-like precision, commenting, “I want to hide the record of my hand.” Later, he went on to reproduce similar effects in large-format screen-prints. So, how did he do it? Let’s take a closer look at his techniques to find out more.

Believe it or not, Lichtenstein’s earliest, and arguably most famous, paintings were executed entirely by hand. Aiming for an entirely machine-made look, he painted with the recently developed acrylic Magna paint, which had a flat, glossy finish that could mimic the polish of printing processes. With this paint, Lichtenstein mimicked the bold hues and black outlines of comic books to create some of the most striking images in the history of art. In his early paintings Lichtenstein even painted his trademark Ben-Day, comic book style dots with his own fair hand to create paler areas of color (more on this below!). And he proved with his visually arresting Pop Art that comic books weren’t just for kids, but could be equally entertaining for adult, art audiences.

Although Lichtenstein’s artworks might look like copies of comic book scenes, he actually worked out a way to make these images entirely his own. After carefully choosing a dynamic, engaging comic-book scene to replicate, he would first modify the image through a series of sketches in pencil until he arrived at a design that he was happy with. Then he would use an opaque projector to help him enlarge and trace this drawing onto canvas, ready to be filled in with paint. Lichtenstein made use of this staged process to create his famous, career-defining artworks In the Car, 1962, and Whaam!, 1963.

Were Lichtenstein’s trademark dots really all painted by hand? Well, yes, in early art such as Look Mickey!, 1961, Lichtenstein tried out painting the dots one at a time, but soon realized it wasn’t the most efficient or effective way to work. Instead, from 1962 onwards he made use of a perforated metal stencil filled with holes, which he could press onto the canvas and brush thick paint through, before removing it to reveal the dotty, pixelated pattern below. Much like comic book printers, Lichtenstein’s paintings show how the dots, when seen from a distance, can imitate paler colors or glossy surfaces like glass and mirror.

As his career progressed Lichtenstein’s use of stencils and dots became more complex, incorporating different sizes, colors and textures of dots into a single image alongside one another to create a fragmented and disjointed effect. We see this technical innovation in works such as Modern Art I, 1996. Speaking about the visual and cultural significance of his dots, Lichtenstein said, “…the dots can have a purely decorative meaning, or they can mean an industrial way of extending the color, or data information, or finally that the image is a fake.” Dots became a trademark feature of Lichtenstein’s art, making it instantly recognizable.

An important strand of Lichtenstein’s later practice was print-making. He explored technical innovations in several techniques including lithography, screen-printing and wood-cuts, and sometimes even combined multiple print techniques within a single image. As well as printing onto paper, Lichtenstein enjoyed experimenting with how his prints could be created on unconventional surfaces – these included acetate, stainless steel and even fabric-backed metallic foil.

From the late 1960s Lichtenstein would often make preparatory collages to help him work out the increasingly complex designs of his Pop artworks. For example, in his ‘Modern Painting’ series, Lichtenstein made a series of dis-jointed, Cubist-style collages before recreating them in his trademark polished, slick style.