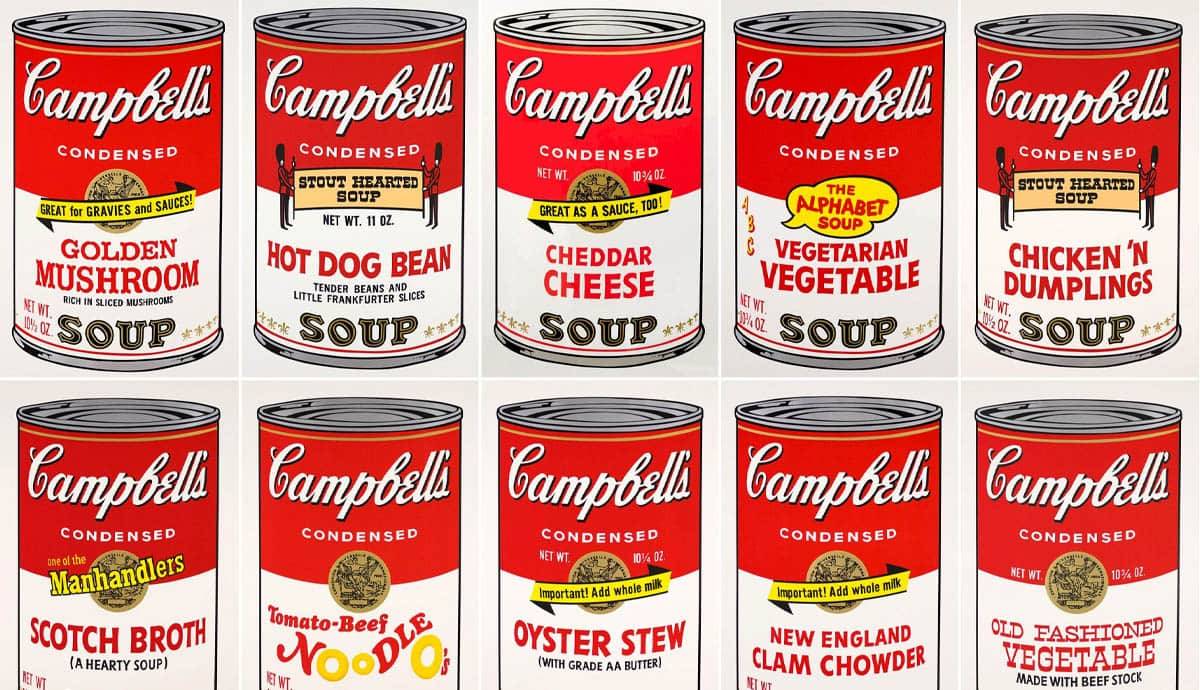 Andy Warhol is the world-renowned poster boy of American Pop Art, who stunned the art world with his striking and instantly recognizable motifs. He was one of the first to take branding and imagery from popular, everyday culture and translate it into bold, confrontational works of art. And he proved that the worlds of design, advertising and art need not be so separate after all. One of Warhol’s most famous motifs is his Campbell’s Soup Cans, which he translated into artworks and clothing. But why the humble soup can? Let’s look at Warhol’s life to understand more.

From a young age Warhol was obsessed with consumerist culture, including magazine advertisements, celebrities and fashion. This enduring interest came to play out in his best-known works of art, most notably in his iconic, hand-painted Campbell’s Soup Cans, 1962. This work is one of many he made with images from commercial culture, celebrating the simple motifs and appealingly bright colors of advertising. Before painting his soup cans, Warhol painted the canned Del Monte Peach Halves his mother used to give him as a child. He later brought other American brands into his artworks, including Brillo and Coca-Cola. We can even read Warhol’s many celebrity portraits as a response to mass media, and the idea of a person’s image as a commercial brand.

One reason why Warhol chose the Campbell’s Soup Can motif was because it connected so closely to ordinary life. He was well aware that these soup cans filled the supermarket shelves and home cupboards across America. He displayed his single can paintings as a repeat series to reflect this mass produced nature of the item. By bringing such logos and motifs from normal life into his paintings and screen-prints, Warhol also wanted to break down the boundaries between art and life, showing that normal experiences should be included on gallery walls, and that art should be accessible to everyone. He said, “I don’t think art should be only for the select few. I think it should be for the mass of the American people.”

The Campbell’s Soup Can was an affordable and storable food option when rationing and austerity still blighted the lives of so many. Looking back, it is a fitting emblem of the post-war times in which Warhol was living. When Warhol created his cheap, wearable paper ‘souper’ dresses featuring the same Campbell’s motif, he further broke down divides between art and life. Making his dresses cheaply from affordable materials meant just about anyone could buy a Warhol dress for themselves.

3. He Enjoyed the Striking Simplicity of the Soup Can Motif

Warhol was attracted to the bold, striking simplicity of the Campbell’s Soup Can design, with its stark red and white colorways. He also enjoyed including text in his works of art, and reproducing advertisements allowed him room to experiment with this arena. In some ways the ornate, curled lettering of the Campbell’s logo can be compared with Warhol’s earlier illustration work, such as his shoe illustrations with hand-written areas of text in a similar cursive, slanted style.

One of the reasons Warhol chose to paint soup was because he liked eating it so much! Before he was famous, Warhol spent many years as a penniless artist living in New York City. Tinned food was an easily affordable staple that could keep him going on limited funds. Warhol always brought the things he loved into his artworks, and that included his favorite brand of soup. He loved Campbells Soup so much he went on to produce many further artworks featuring their iconic logo. When speaking about Campbell’s soup in an interview, he said, “I used to drink it. I used to have the same lunch every day, for 20 years, I guess, the same thing over and over again.”