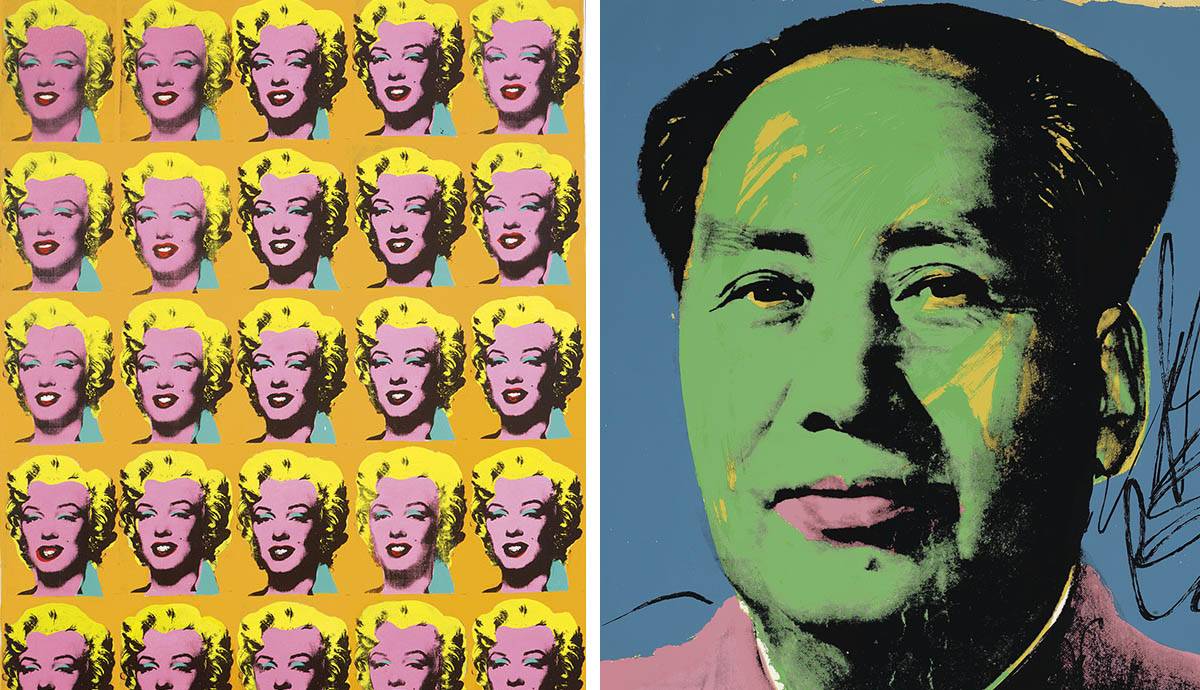 Andy Warhol is the poster boy for American Pop Art, bringing cheeky, gimmicky motifs from popular culture, mass media and advertising into his art. Warhol was obsessed with celebrities and high-profile public figures; in making portraits of them he sought to capture something of their elusive and inaccessible wonder, but also the dark truth that was often hidden behind their glossy veneer. Throughout his long career he made many different portraits in his trademark bold, striking Pop Art designs. But which are his most famous? Let’s take a look through some of the most prominent and well-publicised.

Without a shadow of a doubt, Warhol’s screen-print portraits of Marilyn Monroe are his most famous and iconic. Warhol created many portraits of Marilyn, but his most famous is The Marilyn Diptych, 1962, now held in Tate gallery’s collection in London. He made this pair of canvases in 1962, not long after Marilyn’s tragic and unexpected death. As one of the most famous and successful women of her time, her untimely passing rocked society to its core.

The motif of Marilyn’s face that Warhol used in this work was taken from a publicity shot for the 1953 film Niagara. Thanks to Warhol, this image is now the best-known image of the actor. Looking at the composition and design of this work, Warhol’s reduction of Marilyn into a repeat pattern emphasises the way her public image became a marketable brand that was separate from the real Marilyn behind this facade. Meanwhile, the contrast between the colourful half and the black and white half of this work has been interpreted as a conflict between the glossy, perfect sheen of the star’s public persona, and the hidden secrets of her private life.

Another of Warhol’s most famous icons is Jackie Kennedy, First Lady of America until her husband John F Kennedy was tragically assassinated in 1964. It was following her husband’s assassination that Warhol became particularly obsessed with Jackie’s image, which was plastered all across newspaper articles as the entire nation went into grieving. Warhol was fascinated with the way Jackie came to personify a combination of elegance tinged with pain and tragedy. It is these mutual qualities of glamour and pain that Warhol concisely captures in his stirring portrait Red Jackie, 1964, made in tribute to this amazing woman and the great challenges she had to overcome.

Warhol’s striking portrait Liz, 1964, was made in tribute to the actress Liz Taylor. Based on a publicity shot from Taylor’s 1960 movie Butterfield 8, this silkscreen conveys the famous actress in a series of bold, flat colours, simplifying her image into a cartoon-like motif, a popular trope in Pop Art. Warhol was interested in Liz Taylor’s image because, like Marilyn and Jackie, there was a dissonance between her public and private life.

On the one hand, she was at the very height of her career when this photograph was taken, yet in private she was struggling with various serious and life-threatening health complications. The iridescent colours of this image appear at first bright and enticing, like candy in a sweet shop, but after a while they become garish and unsettling, emphasising the dark underbelly that was often running through 1960s Hollywood.

Mao, 1972: One of Warhol’s Most Controversial Portraits

As well as obsessing over the private lives of various female celebrities, Warhol also captured cultural and political figures who dominated American newspapers. One of the most famous is his portrait of Mao Zedong, the controversial communist leader of China throughout the Cold War. Warhol made this striking portrait following American President Nixon’s visit to China to meet with Chairman Mao Dezong, a historic moment which ended years of diplomatic isolation between China and the United States.

For this portrait Warhol chose an image of Mao’s face that had been reproduced throughout China’s Cultural Revolution, making it one of the most recognised images in the world. In reproducing Mao’s face in the same way as movie stars, or even consumerist items, Warhol seems to suggest there are similarities between the nature of political propaganda and the world of mass media and advertising.