The god Poseidon had a temperament that reflected his domain: he could be unpredictable, tranquil and peaceful, or fatally tempestuous. Just like the ocean. 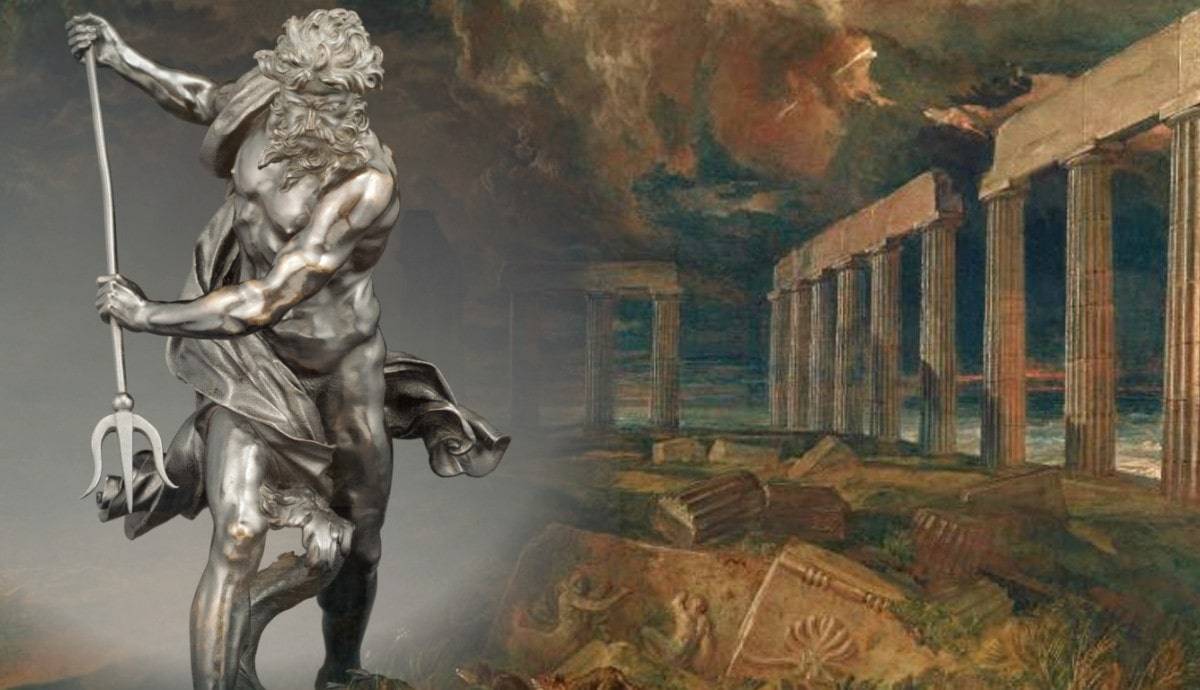 In the popular Percy Jackson book series, in which Greek myth is brought to life in the modern world, Poseidon claims that “the sea does not like to be restrained”. Indeed, Poseidon in the Greek myths does not hold back his power. Poseidon was the Olympian god of the Sea, and of earthquakes, storms, and horses. Those who angered him would suffer his riptide rage. Alternatively, Poseidon could bless pious sailors with peaceful travels. Poseidon was often involved in the myths of heroes, much like the other Olympian gods, and he sired many Greek heroes. His symbol is the three-pronged fork, better known as the trident.

King of the Waves

Poseidon’s domain covered about three-quarters of the world, and so his reach was far and wide. Most of the Olympian Gods had a home on Mount Olympus, but Poseidon had his own kingdom under the sea. He lived in a palace that was made of golden coral, at the very bottom of the ocean.

He lived with his wife Amphitrite, who was a beautiful sea nymph, and with his son, Triton. You may recognize his son’s name as it was the influence for Disney’s popular film The Little Mermaid. Triton is the name of the King of Atlantis, and Ariel is his daughter.

In most artwork depictions of Poseidon, he is shown with wavy locks and a long and curly beard, which greatly resembles the growth of barnacles on the bottom of a ship. For this reason, Poseidon is often nicknamed “Barnacle Beard”. Poseidon’s powers meant that he could cause earthquakes, tsunamis, terrible storms… or else he could ensure that you had a perfect day at the beach.

Under the Sea: Nereids and Dolphins

All aquatic life would obey Poseidon as their master, this included fish, dolphins, sea horses, mythical creatures such as hippocampi (half-horse, half-fish), and sea monsters. Poseidon was particularly fond of dolphins, and his lieutenant was a dolphin named Delphin. Delphin acted as a wingman for Poseidon and convinced the sea nymph Amphitrite to marry him. To show his thanks, Poseidon created the constellation Delphinus, to honor him timelessly in the stars.

The Nereids were 50 sister sea nymphs, each representing different parts of the sea, such as salt water, fresh water, seafoam, and so on. These sisters formed a great part of the court of Poseidon. Queen Amphitrite was one of them and Thetis, the mother of the famous Greek hero Achilles, was another.

The Persecution of Odysseus

If there was one god you didn’t want to get stormed up… it was Poseidon. For the ancient Greeks who were a seafaring population, to anger the Sea God would mean trouble. For Odysseus in particular, angering Poseidon was a great mistake… After the Trojan War, Odysseus was making his way home when he stopped off at the island of Polyphemus, a Cyclops. Unbeknownst to Odysseus, Polyphemus was a son of Poseidon. Therefore, when Odysseus stabbed Polyphemus in the eye and taunted him about his lineage, Polyphemus called on his father for revenge.

Poseidon, offended on behalf of his son, agreed. He added ten long years to Odysseus’ journey home… because the only way for Odysseus to return to his home in Ithaka was by sea. Odysseus was shipwrecked continually, and he had to defeat or escape from many sea monsters on his journey. His toil was so great that he returned home as the sole survivor of his crew that had set out ten years ago to go to war.

The Olympian Gods were famous for being unable to resist mortals, and Poseidon was guilty of giving in to his impulses. When he came across Princess Aethra, he seduced her, and she later bore the Greek hero Theseus.

In myth, Theseus volunteered to go with his comrades as one of the sacrifices which King Minos of Crete demanded every year for his Labyrinth. When Theseus was on King Minos’ ship, the king challenged Theseus to prove his parentage: Minos threw his signet ring into the waves and told Theseus to retrieve it, claiming that he would be able to retrieve the ring if Poseidon was his father.

Theseus dived into the waves, where he was met by dolphins who took him to the palace of Poseidon. Theseus was given the ring and many beautiful adornments. When he returned to the ship, he emerged from the waves completely dry and decorated in his glorious attire. Minos did not doubt Theseus’ lineage after that.

In another myth involving Theseus and Poseidon, Poseidon had given three wishes to Theseus. Theseus could ask for anything, and the god would be bound to his promise. One day, Hippolytus the son of Theseus and grandson of Poseidon was accused of attempting to rape his mother-in-law. Theseus, enraged and appalled, demanded that Poseidon kill Hippolytus for his crimes. Unfortunately, it was only after his death that it was revealed that Hippolytus had been falsely accused.

His Affair with Medusa

The Olympian gods often caused disaster in their wake, and the love affair of Medusa and Poseidon is evidence of this. Medusa, the gorgon with the deadly gaze, was not always a monster. Medusa was once a beautiful young woman with golden curls and a priestess of Athena’s temple.

In one version of the myth, she and Poseidon fell in love and their relationship was a secret. As a priestess of the virgin Goddess Athena, Medusa was prohibited from sexual relationships. But alas, their relationship was eventually discovered…and Athena took her vengeance upon Medusa and cursed her with snakes for hair and a gaze that could turn onlookers to stone: she had become a Gorgon.

When Medusa was slain by the Greek hero Perseus, it turned out that she was pregnant with two of Poseidon’s children. They were magical beings, one was a man named Chrysaor who was named after his golden sword, and Pegasus, the first horse with wings. Poseidon had a particular affinity with horses, as he had created the first horse out of sea foam to impress a previous lover.

Poseidon and His Rivalry With Athena

The fiasco with Medusa was not the only time that Poseidon and Athena quarreled. These two gods had a famous rivalry. When the city of Athens had just been created, the Athenians wanted to choose a patron god for their city.

A patron god was a powerful deity whom the citizens would honor and worship above all others, and in return, the god would favor the city and protect them. The Olympian Gods loved to be worshipped as it gave them more status, and they would receive more offerings from humans. Athena and Poseidon both wanted to be the patron god of Athens, which at the time had no name for its city and its people. From the title of the city now, you can see where the myth leads…

In an effort to win the title of “patron” Poseidon and Athena both offered a divine gift. Poseidon struck his trident against a rock at the top of the city (the Acropolis) and out burst a salt-water spring. Athena touched the ground with her spear, and an olive tree sprouted from the ground. The Athenians chose Athena as the victor, and hence named themselves after her. Poseidon was disappointed, but the Athenians continued to worship him, so they did not experience his wrath.

Poseidon and the Olympian Gods: Brother Against Brother

Poseidon’s competitive nature was not just against Athena, but his brother, too. In the Greek myths, some of the gods were unhappy with Zeus’ rule. In one version, a group of these unhappy gods appealed to Poseidon for his help in overthrowing Zeus, as they thought he was too tyrannical. At first, Poseidon declined because the throne did not interest him, the oceans were enough. However, their pleading did not cease, and so he eventually agreed. Homer, the ancient poet, thought that Poseidon’s half-heartedness is what caused the plot to fail in the end.

In another version, Poseidon was one of the main conspirators, along with Athena and Hera. They managed to get Zeus bound in chains, but they began to argue amongst themselves who should be the ruler in his place. While they were distracted, Thetis the sea nymph employed Briareus, the hundred-handed one, to help her free Zeus. So, Zeus was unchained, and the other gods were punished, and Poseidon had to help Apollo build the mighty walls of Troy, which later became the site for the Trojan War.

Poseidon was not always against his brother, but eternity is a long time after all, and so the Olympian gods were bound to have the occasional catastrophic argument amongst themselves. Before the rule of the Olympian gods was the rule of the Titans. Kronos was their leader, and he was the father of Zeus, Poseidon, Hades, Demeter, Hera, and Hestia. However, there was a prophecy that Kronos would be overthrown by one of his children, and so the Titan ate all of his children one by one.

Zeus, the youngest boy, was saved by his mother, who gave Kronos a rock to eat instead. Fortunately, Kronos was fooled. Zeus was hidden away to be raised by nymphs, and when he was fully grown, he returned to his father and gave him a special magical drink. This drink caused Kronos to regurgitate all of his children, and they emerged fully grown. Together, the siblings defeated Kronos.

Poseidon became one of the 12 major Olympian gods, but the trio who held the most power were the brothers Zeus, Poseidon, and Hades. When the world was being divided after the fall of Kronos, each brother received a portion by lot. Zeus received the Sky as his domain, Poseidon the Sea, and Hades the Underworld.

Poseidon in the World Today

Today, you can see the influence of Poseidon still present in his domain. You might see the modern Poseidon in the surfer, the fisherman, the lifeguard, or the sailor. His barnacle beard might catch your eye.

Ancient monuments to Poseidon still stand now. The Temple of Poseidon at Cape Sounion is a beautiful ruin overlooking the sea, which you can still visit. The view of the ocean and the temple is spectacular at sunset. Poseidon is often the inspiration for fountain designs, too, such as the Witley Court and Gardens Poseidon fountain in Worcestershire.

The ocean’s unpredictability, capability for destruction, and calming effect, are all attributed to the mood of Poseidon in Greek mythology. Sailors would have a wonderful voyage if they remembered to honor the god. However, if Poseidon was offended, the punishment would be devastating, like a wrecked ship after a storm.

The Ship Of Theseus Thought Experiment