Many know Athena as the Greek goddess of war and wisdom, but there is much more to her. Did you know these seven facts about Goddess Athena? 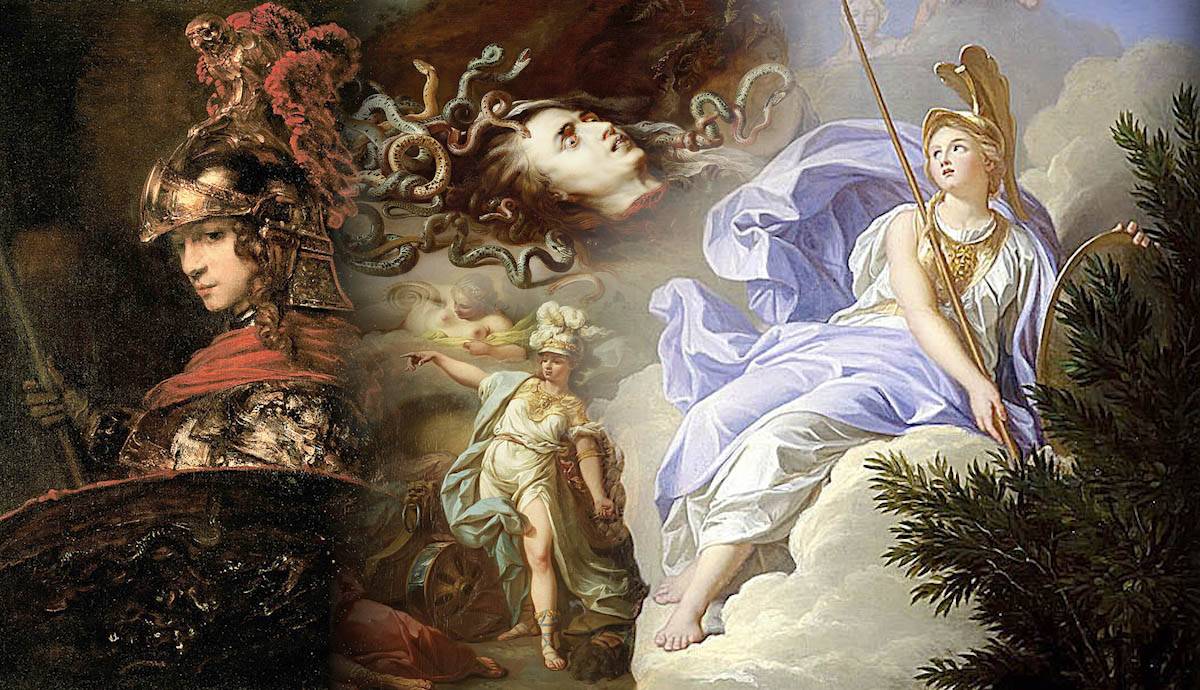 Goddess Athena, daughter of Zeus, was the Greek goddess of crafts, wisdom, and warfare. Inscriptions about the goddess were found in Linear B tablets, and Athena was originally an Aegean goddess who served as a protector for the king.

From the founding of Athens to the Trojan War Heroes, Athena played an important role in many Greeks myths and stories.  Here, we will learn 7 key facts and stories about the goddess.

1. Goddess Athena Had Only One Parent

Unlike the rest of the Olympic gods, goddess Athena did not have two parents. Far from a traditional birth, Athena sprang from Zeus’ head fully grown dressed in battle armor. Athena was most often represented in this form, a grown woman in full battle armor. Within mythology and literature, Athena is often referred to by her singular parentage.

There are many iterations of how Zeus came to be Athena’s only parent. In many versions of the story, Zeus impregnated Metis, his first wife. Their son was destined to overthrow Zeus just as he had his father and his father had before him. Afraid of his own demise, Zeus swallowed Metis in the form of a fly, hoping to prevent a son from usurping him. Zeus was then afflicted by a pounding headache, and when Hephaestus split open his skull to relieve the pain, out came Athena. In some versions of the story, where the motherless nature of Athena is more clear, Metis is not involved at all.

The goddess Athena’s birth story was used in Aeschylus’ Eumenides as justification as to why the father was the most important parent. Orestes was on trial in Athens for the death of his mother, Clytemnestra. He claimed the killing was justified because Clytemnestra murdered Agamemnon, his father. Apollo, acting as a lawyer for Orestes, argued that Athena’s birth was proof that the father was the only parent who mattered (Eumenides, Lines 655-670). If this was not the case, how could it be that Athena was born without a mother?

Goddess Athena, depicted with her helmet, was often referred to as Pallas Athena or simply Pallas. There are two prevailing myths as to why Athena took the name Pallas. According to Apollodorus, Pallas was a giant that Athena skinned in battle, later wearing his skin into battle to protect herself (Bibliotheca I.VI.II). She then took on the name of the giant to commemorate her success in battle. However, another myth states that Pallas was her childhood friend, whom she accidentally killed while playing. Filled with grief, Athena took on the name in memory of her friend, placing it before her own (Robert Graves, The Greek Myths).

Parthenos, which translates to virgin or maiden, was an epithet given to goddess Athena to acknowledge her status as a virgin deity. In Athens, the Parthenon, the largest temple in the Acropolis, was dedicated to Athena. The temple held Athena Parthenos, a 37 feet tall statue of the goddess. The original statue was sculpted by Phidias and has since been lost or destroyed.

Athena and Poseidon competed to become the patron deity of Athens, back when the city had no name. The competition would be judged by Cecrops, the half-man, half-serpent king of the city. Each god was asked to present a gift for the people of Athens. Poseidon struck the earth and created a spring to allow access to water and trade. However, the spring was filled with salty water, rendering it undrinkable. Athena gifted the city an olive tree, which could be used for wood, food, and trade. Cecrops chose Athena as the winner. She and her olive tree became symbols of the city that received Athena’s name; Athens.

Athena is also closely tied to Athens because of her adopted son, Erichthonius. In some versions, Hephaestus demanded Athena’s hand in marriage as a reward for opening Zeus’ skull to birth the goddess. In others, he attempts to rape her. Athena wiped his ejaculate onto the earth, from which was born Erichthonius (Apollodorus, Bibliotheca III.XIV.VI). The child grew to be one of the founding Greek heroes of Athens.

In Book VI of Metamorphoses, Ovid tells the story of Arachne, whom Athena turned into a spider (Lines 1-145). Athena, as the goddess of craftwork, was renowned for her weaving. Arachne, a mortal woman, boasted that she was a better weaver than the goddess herself. This act of hubris greatly angered Athena, who tried to make Arachne repent while disguised as an old woman. When Arachne refused, Athena revealed herself and challenged Arachne to a weaving contest.

Athena’s tapestry illustrated her triumph over Poseidon in their contest over Athens’ patronage. Around the border of her tapestry, Athena portrayed other contests between gods and mortals, all of whom were punished for hubris.  Arachne, on the other hand, weaved the exploits and affairs of the gods in a tapestry so perfect, that Athena could find no fault with the workmanship.

Enraged by the quality and topic of Arachne’s tapestry, Athena beat the woman, causing Arachne to hang herself in shame. At that moment, however, Athena pitied her and transformed Arachne into a spider, to be forever weaving webs (Arachne in Greek literally means spider).

5. Athena Played a Major Role During the Trojan War

War goddess, Athena was one of three vying for the title of the “Fairest Goddess” along with Hera and Aphrodite (Ovid, Heroides V). Despite promising Paris glory in war, Athena lost to Aphrodite, who had vowed to let Paris marry the most beautiful woman in the world (Ovid, Heroides XVI). Angry with Paris and the Trojans, Athena sided with the Greeks (Achaeans) during the Trojan War, ensuring that her favorite Achaean heroes would be kept safe.

During the war, Athena feuded with her brother, Ares, over his role in helping the Trojans. As gods, Ares and Athena represent different aspects of war; Ares, the blood lust and physicality of battle; Athena, the strategy and planning aspects. Although Ares was technically neutral, he often acted on behalf of the Trojans to appease his lover, Aphrodite. Athena also spared with other Olympian gods who took the Trojan side, particularly Aphrodite.

Athena intervened many times on behalf of the Greeks, breaking the non-intervention rule that Zeus had implemented. Athena granted Diomedes superhuman strength, causing him to slaughter Trojans and wound Aphrodite (Iliad V.335-355). In the infamous duel between Achilles and Hector, Athena tricked Hector into facing Achilles without a weapon, leading to his death (Iliad XXII.295-300).  Later, Athena sent forward the serpents that killed Laocoon, after he tried to stop the Trojans from accepting the legendary Trojan horse left by the Greeks (Aeneid II.280-309). Laocoon’s death scene was immortalized in Virgil Aeneid and in sculpture.

However, Athena also punished Achaeans who acted against her and without piety during the war. Within the city of Troy, was a temple to Athena, where Cassandra sought shelter during the siege of the city. Ajax the Lesser dragged her from the temple to rape her. In return, Athena destroyed many of the Greek ships after the Greeks refused to kill him. The Trojan statue of the goddess, called a palladium, was stolen by the Greeks during the Trojan war (Virgil, Aeneid II.230-232). At the end of the Trojan War, Athena caused Ajax the Great, Odysseus’ greatest rival among the Achaeans, to go mad and kill himself. In Sophocles’ play Ajax, Athena does this in order to protect Odysseus from his enemy’s anger over not getting Achilles’ armor.

One of the most famous ‘monsters’ in Greek mythology, Medusa was originally a priestess of the goddess Athena, renowned for her beauty. Struck by her beauty, Poseidon raped Medusa in Athena’s temple. As punishment for defiling her sacred space, Athena turned Medusa’s hair into snakes and cursed her to turn any man who looked at her head into stone (Ovid, Metamorphoses IV). Some later feminist interpretations of the story portray Athena’s actions as helping Medusa ensure that no man would attack her again.

7. Goddess Athena Served as Protector of Heroes in Greek Mythology

Athena played a crucial role in numerous Greek myths as a guide and advisor of demi-gods and mortal heroes. Athena helped Jason in the construction of the Argo and Perseus in his quest to kill Medusa (Apollodorus, Bibliotheca I.IX.XVI). In Pindar’s Olympian Odes, Bellerophon was able to tame Pegasus through Athena’s help (Olympian Ode XIII.70-80). Many depictions of Hercules’ labors include Athena as a guide and helper of the hero.

Perseus, another hero favored by Athena, slew Medusa and decapitated her (Hesiod, Theogony Lines 280-285). For this task, he used a mirror given to him by the goddess. This allowed him to fight the monster without looking at her face. As a thank you, Perseus gave the goddess Medusa’s head. Athena then used the head on her shield (or aegis) to scare her opponents. The goddess is often portrayed in art with the head of a Gorgon either on her armor or her shield.

Diomedes throughout the Iliad is seen as highly favored by the goddess Athena. In Book V (V.120-135), Athena reveals herself to the hero without a disguise, something that she did not even do for her favorite Odysseus in The Odyssey. As mentioned previously, the hero was given super strength by the goddess in order to slaughter his opponents.

Athena is perhaps most famous for her relationship with Odysseus, the Greek king of Ithaca, who served as a primary strategist for the Achaeans during the Trojan war. The goddess was said to be impressed by Odysseus’s wit and strategic thought. In The Odyssey, Athena plays a major role in guiding Odysseus back home (I.44-55), ensuring that he is reunited with his wife and son.

By Marta FaticaMSc Comparative Politics, BA Political Science and Classical CivilizationsMarta has a B.A. in Political Science and Classical Civilizations from UC Berkeley and an MSc in Comparative Politics from LSE. Originally from California, she spent her summers as a child wandering through Roman ruins and now resides in England. In addition to her native English and Italian, Marta spent over ten years studying Latin. Her areas of interest are Greco-Roman mythology, Latin poems, as well as contemporary European politics. When she isn’t at home reading or baking, Marta can be found spending hours in museums and trying new restaurants.