Are shrunken heads real? How are they made? Although the realities of head shrinking are gruesome, it’s also very intriguing. Here are 8 disturbing facts. 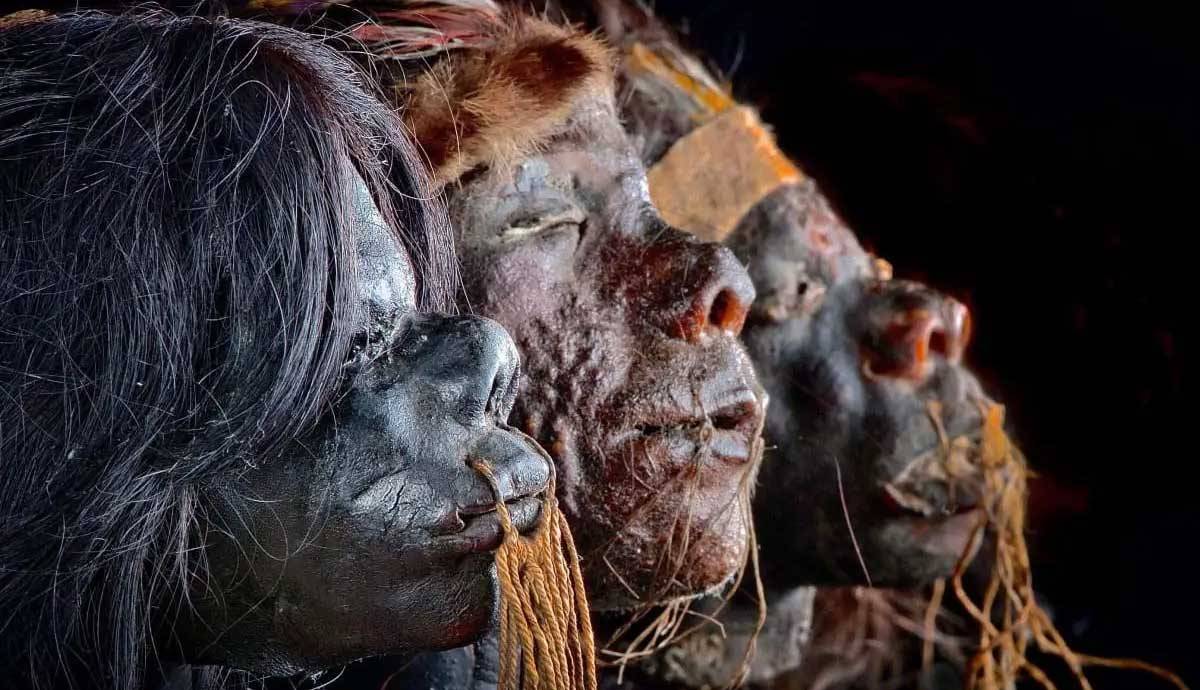 Shrunken heads, also known to natives as tsantsas, are a traditional ritual rooted in superstition and mystery. Here, we’re exploring what they were used for, how they were made, if the practice still exists, and other questions you might have about shrunken heads.

Beware! It can get pretty gruesome, so if you have a weak stomach, it’s probably best to check out some of our other articles.

1. What Were Shrunken Heads Used For?

Tsantsas are severed human heads that were used by tribal cultures in myriad ways. Sometimes, they were used as war trophies or for ceremonial purposes. In other cases, tribes might use them to scare off an enemy, using the heads as a threat. These were also used in religious rituals and, recently, they were even used for trade purposes.

Although headhunting was a common practice among many ancient tribes, the act of shrinking heads has been found throughout the Pacific and northwestern Amazonian regions of South America.

Known as the Jivaroan people of Jivaro, these tribes in the Amazon region include the Shuar people, Aguaruna, Huambisa, and Achuar people of modern-day Ecuador and Northern Peru.

Additionally, there is some evidence that the Aztecs practiced a shrunken head ritual along with tribes in some areas of modern-day Venezuela. It seems to be a tradition that is most often associated with indigenous South Americans and has been brought into voodoo culture of similar origins.

Yes, they are real human remains. That means that if you’ve seen authentic tsantsas exhibited at museums and in private collections around the world, they would have belonged to actual human beings. Pretty crazy, right?

However, it is now estimated that around 80 percent of all these heads in museum collections are actually counterfeit versions of the tribal token. But more on that later.

4. How Were Shrunken Heads Made?

Shrunken head rituals seem to most often be associated with war and the superstitions behind getting rid of your enemy. Headhunter warriors would decapitate enemies of the tribe and, depending on the ritual, the shrinking process could begin right away.

The warrior might remove their headband and thread it through the neck and mouth of the decapitated head for easy transport. The warrior also might make an incision from the back of the neck, all the way up the skull, preparing to remove the skin and hair.

The discarded skulls would often be offered to anacondas, which were seen as spiritual guides in their culture. Then, once the warriors returned to the tribe, the boiling process would begin with lavish celebrations full of eating and drinking.

First, the eyelids were sewn shut and the lips were skewered with sticks. Then, in a large boiling pot of water, the heads were simmered, emerging about a third of their original size with darker skin that was more rubbery and tough.

The process continues as hot stones and hot sand was placed inside the heads, which created a “tanning” effect on the inside, and the head was shaped further using additional hot stones until it was molded into the desired shape.

Finally, the heads were rubbed with charcoal or smoked over a fire to blacken, as it was believed that this would keep the avenged soul from escaping the head. Then, the head was placed on a stick or attached to string as a trophy, either carried or worn around a warrior’s neck.

5. How Long Does It Take to Make a Shrunken Head?

The shrinking process doesn’t take long at all. The ritual side of things, on the other hand, would usually last a total of about six days. For the heads to shrink, they would be boiled for only about two hours. Boiling it for too long would leave them ending up gooey and destroyed.

Although it doesn’t take an exorbitant amount of time, surprisingly, these were discarded immediately after the ritual and celebrations were complete. But, when visitors and collectors started to become interested, these tribesmen saw an opportunity to use shrunken heads as goods in trading practices. Otherwise, they were often fed to animals or given to children as toys.

The trafficking of these heads was outlawed by Ecuadorian and Peruvian governments in the 1930s, but it doesn’t seem to be any laws in Ecuador or Peru that prevent shrinking heads outright.

In the 90 years since lawmakers made the sale of tsantsas illegal, it may have still been practiced by the older generations. But the more Western culture and religion seeped into the area, the less these rituals were executed. Most likely, an authentic shrunken head hasn’t been made in over 20 years.

7. Can Ceremonial Tsantsas Be Obtained or Bought Today?

Tsantsas from South America were highly sought-after commodities by Westerners, especially during the late 1800s and early 1900s. This meant that tribes actually started killing each other just to meet the demand for commercial tsantsas.

As previously mentioned, the sale of them became illegal by the 1930s, which discouraged murder for this purpose. So, if you see them being sold online, you can assume that they’re not actually human heads that were shrunken as a tribal ritual. Still, if you’re enamored by these cultures and superstitions, it might still be something you want to have for yourself, regardless of its authenticity.

8. What Are Shrunken Head Replicas Made From?

Shrunken head replicas can be made of synthetic materials such as leather or fabric, while others are made of animals such as sloths, pigs, cows, or monkeys. However, the legality of using animals for this purpose is also questionable.

As you might imagine, many fake tsantsas are offered and sold as genuine to collectors and casual buyers at relatively high prices. So, even if a seller is claiming to have a real shrunken head, it’s smart to be skeptical of such claims.

Overall, the heads have a gruesome yet interesting history, and these artifacts have surely made their way into mainstream culture. Now, you probably associate shrunken heads with voodoo or Harry Potter magic. But hopefully, this sheds some light on their origins.

By Jesus SantillanBA Anthropology w/ Archaeology ConcentrationJesus Santillan is a contributing writer and researcher with an emphasis on Mesoamerican civilizations. His studies include a Bachelor's in Anthropology with a focus on archaeology. In his free time he tutors students and writes independently. Jesus is from Zacatecas, and currently lives in San Luis Potosí, Mexico.

The Voodoo Queens of New Orleans