Ancient DNA may reveal the source of the devastating epidemic that destroyed the indigenous peoples of Mexico - a salmonella outbreak. 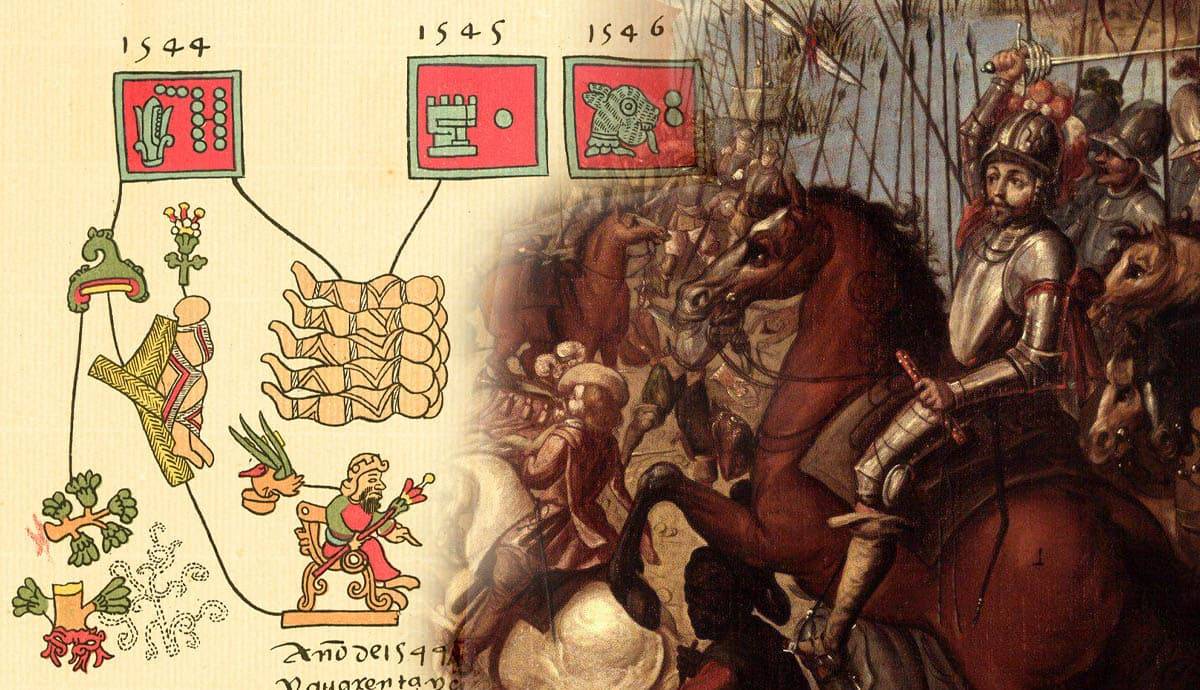 Cocoliztli, the epidemic that devastated the Aztecs in the 16th century, began with a fever and a headache, according to Francisco Hernandez de Toledo, a Spanish physician who witnessed the second epidemic among the Aztecs in the sixteenth century. The victims suffered from a terrible thirst. Pain radiated from their abdomen and chest. Their tongues turned black. Their urine turned green, then black. Large, hard lumps broke out on their heads and neck. Their bodies turned a deep yellow. Hallucinations set in. Finally, blood spouted from the eyes, mouth, and nose. In only a few days from the onset, they were dead. Was this a salmonella outbreak?

It is unlikely that the reader has known anyone who died in a similar manner. In 1547 in the highlands of Mexico, it was just as unlikely not to have known death exactly like that. Eighty percent of the native people of Mexico, 12-15 million victims, entire households and villages, died in agony.

A family of ten — grandparents, parents, and siblings — could be reduced to five people in three to four days. Then, two days later, to two people, the last family member running for water in order to care for her last sibling. Perhaps she, too, grows ill in the end, lapsing into delirium. By the end of a week, if she recovers, thin and weak, she finds herself in a silent house, the bodies of her grandparents, parents, and siblings buried in a mass grave. Bewildered and traumatized, she lives in a village all but empty.

The first cocoliztli began in 1545, 26 years after Hernan Cortes invaded the heart of the Aztec Empire in 1519. In 1520, smallpox killed eight million indigenous people and significantly eased Cortes’ route to victory. However, when people began dying in 1545, it was not smallpox. No one seemed to know what it was, the question persisting for almost five hundred years.

Evidence of a Salmonella Outbreak Unearthed

The answer may have been pried out of the teeth of two sets of human remains recently excavated from a cemetery beneath a plaza in Teposcolula-Yucundaa, Mexico. At the time of the burials, the site had been inhabited by the Mixtecs, a people who had to pay tribute to the Aztecs, known as Mexica. Like all the native peoples, the Mixtecs were also decimated by cocoliztli. Salmonella enterica serovar Paratyphi C, a pathogen that can lead to typhoid fever, was in the bloodstreams of the subjects at the time of their death.

The Routes of a Salmonella Outbreak

Salmonella enterica bacteria comes in 2600 versions or ‘serotypes’. Most of them cause salmonella poisoning, a decidedly unpleasant but rarely fatal contamination of the lower intestine. There are only four human typhoidal salmonellas, Salmonella enterica serotype Typhi and Paratyphi A, B, and C. Today Salmonella enterica Typhi is the most serious with 22 million illnesses and 200,000 deaths per year, mostly in countries that struggle to maintain adequate sanitation systems. Paratyphi A and B also cause typhoid fever, technically paratyphoid fever,  but with fewer fatalities. Interestingly, Paratyphi C is rare and when it does cause contamination, it usually is not as serious as the other typhoidal salmonellas. In fact, Paratyphi C at first glance, does not seem a likely candidate for the horrors of cocoliztli. However, microbes, in their fight to win an evolutionary war, can be devious.

Human typhoid fever comes from the feces of another human harboring the contaminant in their digestive tracts. When the bacteria leaks into the water supply and is used as drinking water or to water agriculture fields, it can end up in the gastrointestinal tract of another human being.

There is another path the bacteria can take. Before the Spanish arrived, Tenochtitlan had a more advanced sanitation system than the Europeans and was an immaculate city by 16th century standards. Human excrement was collected from public and private privies, carted away, and used for fertilizing agriculture. Many cultures fertilize their fields with “night soil”, even today. Until the arrival of germ theory, this would have seemed a reasonable and sustainable agricultural practice.

Today the origins of typhoid fever are well known. It is also known that salmonella can live for a long time in the environment. For example, research with tomatoes showed that Salmonella enterica can live on tomato plants for six weeks after being watered with salmonella-tainted water.

Salmonella in the Human Body

Once swallowed, the bacteria survive the stomach’s acidic environment, reach the small intestine, bypass the mucus layer by expelling toxins that downplay the normal immune response, and pierce the cells that line the intestine. Macrophages, large immune cells that normally digest foreign microbes, rush in and engulf the invaders. For most bacteria, this is the end of the story, but salmonella is especially well-equipped. Once inside the macrophage, the salmonella sends out chemical signals that convince the macrophage to encapsulate the invading bacteria with a membrane, thus protecting it from being eaten by the macrophage cell it invaded. Safe inside the membrane, the bacterium replicates. Eventually, it is released into the bloodstream and lymphatic system to infect the gallbladder, liver, spleen, and the small intestine, destroying human tissues everywhere it goes.

In the ancient DNA found in the 16th century cemetery, there are also differences in the SPI-7. However, these differences may have given the bacteria the ability to be more virulent, hence increasing the chance of being the source of the epidemic.

Because the Europeans had brought so many diseases with them, it was often assumed that they had brought cocoliztli. Indeed, both the Spanish and the enslaved people from Africa that the Spanish brought with them, although susceptible to the disease, were much less severely affected than the native people.

Until recently though, attributing the source of infection to the Old World was educated guesswork. That has changed with another DNA discovery. In Trondheim, Norway, genomic analysis from teeth and bones of a young woman buried about 1200 CE show that she most likely died of enteric fever caused by Salmonella enterica Paratyphi C.

One to six percent of people who become infected with typhoidal salmonella are asymptomatic. It would take just one soldier, colonist, or slave, contributing to the agriculture fields or water supply, to begin the epidemic. Like Typhoid Mary, he or she might be lifelong carriers and not even realize it.

DNA analysis can even answer the question of how Salmonella originally infected the populations of the Europe/Asia/Africa landmass. Pigs. Salmonella choleraesius, a swine-oriented pathogen, acquired the genes that allowed it to infect humans at some point in the domestication of pigs. It continued to pick up genes that allowed it to be more successful in its new host so that eventually it resembled Salmonella enterica Typhi although actually, they do not share a common ancestor.

Drought and Rain: Demographics of a Possible Salmonella Outbreak

In 1545 and 1576, when the two largest epidemics began, Mexico experienced increased rainfall sandwiched between episodes of severe drought. The rainwater would have washed fertilizer into the water supply. Afterward, the drought would have concentrated the drinking water and likewise the bacteria within it. A modern study in Kathmandu, Nepal, found that high bacterial contamination of Salmonella enterica in the drinking water occurred one to two months after the monsoon season. The researchers concluded that there was a concentration effect as the water supply decreased.

Finally, the severity of the disease apparently depended upon the geographical location. The disease mainly struck the highlands of Mexico. In particular, for both major cocoliztli epidemics, the indigenous people of the coastal areas were less affected by the disease, despite their more frequent and long-term contact with the people from the Old World.  That is puzzling if the pestilence had come from across the ocean unless…  the contact itself had decreased the virulence of the disease.

Perhaps, in the 31 years before the first cocoliztli arrived, the native people with the most contact with the new conquistadors had been infected with a more benign form of salmonella, giving their immune system the ability to decrease the severity of cocoliztli when it arrived. A review article provides details of mechanisms within the immune system as it battles enteric fever. The mechanisms suggest that this scenario is at least possible.

Salmonella enterica Paratyphi C has been presented as the probable cause of one of the greatest tragedies in human history, except some of the symptoms noted by many eyewitnesses at the time, such as bleeding from eyes, ears, and mouth, green-black urine, and large growths on the head and neck, do not correspond to typhoid fever. Perhaps there may still be revelations in the gene code of Paratyphi and a new understanding on how those genes express themselves. Perhaps the excessive symptoms observed are the reaction of a human body that has not coevolved with the bacteria for millennia. Or perhaps there is another undetected pathogen yet to be discovered.

The likelihood that the native population was attacked by two lethal microbes at the same time over and over again seems unlikely; unless, the two microbes prevailed under the same environmental conditions and worked together to create the horrific symptoms. Does disease work that way? It might.

There is a great deal yet to be learned about the microbial world and one of the areas that is still in its infancy is the study of pathogen-pathogen interaction. Indeed, non-DNA-based viruses could not have been detected by the same methods employed to discover Paratyphi C, so an accompanying virus cannot be ruled out.

In addition, the living conditions of many of the original inhabitants had been drastically altered after the Spanish Conquest. Famine, drought, and harsh conditions undoubtedly played a role in the fatalities.

Thirty years after the initial cocoliztli, another overwhelming epidemic attacked what was left of the indigenous people. Two million more people died, fifty percent of the population. The woman who had survived the first epidemic may have rebuilt a life, only to see children and grandchildren grow sick and die. Eyewitnesses at the time noted that the older generation was less affected than the younger during the 1576 epidemic. People in their forties and fifties were fewer. So many had died in previous epidemics. But of the ones remaining, it is likely they harbored an enhanced immune system in regards to cocoliztli. It was the youth that died. The despair of those who had experienced it before and were forced to face the loss of their families again can hardly be imagined.