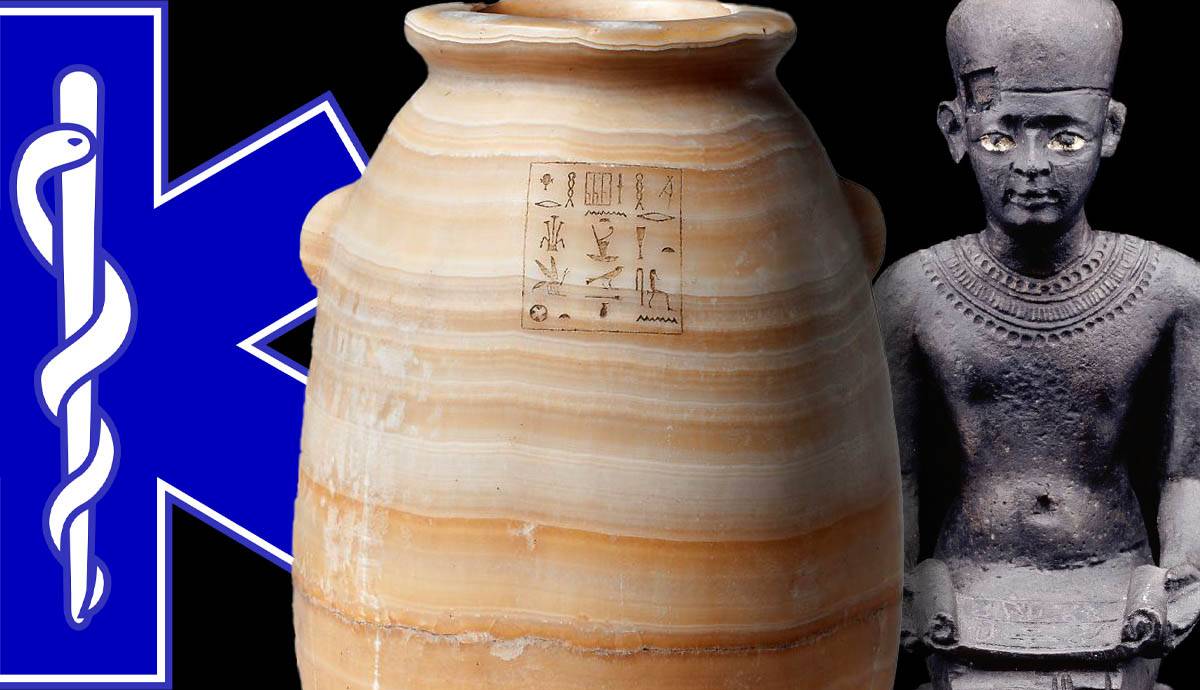 In the ancient world, the Egyptians were well-known for their medicinal care; Homer says as much in the Odyssey. Herodotus adds that both Cyrus and Darius, rulers of the Persian Empire, had Egyptian doctors. Their reputation was not undeserved. Knowledge from the medicine of ancient Egypt dates back at least 3500 years from three primary papyri: the Ebers, Edwin Smith, and the Kahun Gynecological Papyri. Many of the instructions within the papyri parallel modern medical procedures and contain remedies utilizing hundreds of ingredients. Some of those ingredients have recently provided laboratory evidence that they contain effective pharmaceutical properties.

George Ebers, a professor of Egyptology at Leipzig University, came into possession of a remarkable document in 1862. As he translated it, he discovered that it was written about 1500 BCE but was apparently rewritten from an original a thousand years older. It stands as the earliest documentation of deductive reasoning. Written as a reference for practicing physicians, it set rigid procedures for patient care. First, the physician was directed to question the patient. Second, they conducted a physical exam using their sense of smell, checking the pulse and feeling for palpitations. Third, urine, feces, and spit were examined, a process that mirrors the purpose of modern lab analysis. Finally, a prognosis is reached consisting of three options. The physician decides if it is a treatable disease, a disease that could be battled, or a disease for which nothing can be done.

The rest of the Ebers Papyrus has over seven hundred remedies and incantations. Many of the herbal ingredients are still unknown due to translation difficulties, but the translated material demands respect for the depth of knowledge implicit in the 3500-year-old medicine.

Specialization in the Medicine of Ancient Egypt

Many physicians specialized throughout Egyptian history, from the Old Kingdom to the Ptolemies. As noted by Herodotus, inscriptions on tombs and the medical papyri show that neurologists, ophthalmologists, dentists, gastroenterologists, proctologists, and internal medicine specialists practiced in Egypt. Some doctors had more than one specialty. One highly accomplished physician was Ir-en-akhy. His tomb announces that he was an eye doctor, a gastroenterologist, an “interpreter of liquids,” and a “shepherd of the anus.”

Several types of other practitioners also existed. The Ebers papyrus mentions “snwn,” a title for a secular physician, a “sau” who was a magician, and a “wab” who was a healer-priest. Paid by the pharaoh, the physicians could treat patients for free. Most healers were middle class and were paid with various cereals and beer, but a few court physicians were considered part of the upper class. To date, Qa’ar is the oldest mummy found who had been a physician. He lived during the Fifth Dynasty, about 2500 BCE. This corresponds to the approximate date of the original version of the Ebers Papyrus; therefore, Qa’ar likely was working within a well-established medical tradition even at that early date.

Imhotep, an architect of King Djoser’s pyramid, was idolized and came to represent the ideal doctor as the centuries passed. Currently, there is little evidence that he was, in fact, a physician, but that may change. Despite the time that passed between his life and the creation of his cult, the identity of Imhotep as a physician is firmly embedded, and discoveries continue to be made.

Like modern MASH units, physicians traveled with the military on war campaigns in order to treat the wounded. In fact, the oldest medical textbooks in existence were devoted to wound care. The Edwin Smith papyrus, written about 1500 BCE, like the Ebers Papyrus, is thought to have been rewritten from much older texts from the Old Kingdom (about 2500 BCE).

Simple wounds received an application of fresh meat, sealed with a mixture of oil and honey and wrapped in a linen bandage. As an ancient wound dressing, honey would have been ideal as it would not grow bacteria. It was used extensively in the remedies contained in the Ebers papyrus. More severe wounds that gaped but which were uninfected were sewn. Finally, if a wound became locally inflamed, desiccating solutions were applied to dry it out. If the patient grew feverish, i.e., sepsis had set in, the wound was cauterized, effectively removing the damaged tissue to allow healing to occur. Thus, by at least 1600 BCE, and probably much earlier, the ancient Egyptians were completely familiar with the various stages and severities of wounds and cared for them competently with the available tools. Burns were treated with similar skill.

The Ebers Papyrus states that “yeast of sweet beer” was also a wound remedy. Currently, it ranks as the first documented account of yeast used as an antibiotic, showing how progressive the medicine of ancient Egypt was. In addition, moldy bread was one of a multitude of remedies used to treat infections in ancient Egypt. While moldy bread would have been a risky procedure and would not have created penicillin of the genus currently used as an antibiotic, it may have grown a species of fungus in the penicillin family, depending on the type of bread that it grew upon. As with many folk remedies, many questions about efficacy and safety have yet to be answered.

The medicine of ancient Egypt was made from a vast array of plants and other materials that are now recognized as having pharmaceutical properties. For example, raw garlic was used extensively due to its allicin content. Just one of its many uses was keeping asthma under control. A willow and myrtle concoction was used to ease inflammation and joint pains, an extremely early precursor to the use of salicin as it is used today in aspirin. Other plants and minerals used include chickpeas, clover, cannabis, endive, iris, mustard, rose, rosemary, thistle, asparagus, eggs, liver, hair, wax, cumin, fennel, aloe, castor oil, and feces.

A patient with a common cold or other virus-induced symptoms was given the milk of a woman who had given birth to a boy. As culturally disturbing to modern sensibilities as this is, it was probably beneficial. The gender of the child would have been irrelevant except from a placebo standpoint, but breast milk in general is full of components like the natural antibody SIgA that boost immunity.

Various eye maladies were endemic to the area, including blindness from trachoma due to a bacteria, Chlamydia trachomatis. One of the ways that eye infections were kept at bay was the use of cosmetics. The eyeliner was made with antimony, which is being studied for its antibacterial action. Likewise, the green eyeshadow favored by ancient Egyptians was made of malachite, which garnered its green color from copper, also a potent antibacterial agent.

Schistosomiasis is a parasite that was as endemic to Egypt then as now. To treat it, the physician mixed antimony with honey. Unsurprisingly, antimony compounds are still used for the same parasitic infection today. Finally, the guinea worm, a not-so-charming animal, is removed from the body the same way in ancient Egypt as today, by winding it around a stick when it pokes its head out of the skin. Interestingly, the famous symbol for medicine, the Rod of Asclepius, may hark back to this practice of the ancient Egyptians.

The earliest physical evidence of an artificial appendage is the big toe of a girl in a priest’s tomb about 1500 BCE. The priest had replaced his daughter’s toe with a wood and leather facsimile, creating an aesthetic and functional equivalent.

Birth control was socially and religiously acceptable and taught by midwives. The Kahun Gynecological Papyrus lists several recipes for internally inserted contraceptives dating from 1800 BCE. The instructions contained ingredients such as natron, which was a type of salt found in various Egyptian lakes, acacia gum, sour milk, and crocodile dung. All contain spermicidal properties. The natron worked as a desiccant. The sour milk contributed lactic acid. And the acacia gum contained triterpene saponins. Even the crocodile dung, which several modern researchers suggest worked best as a partner deterrent, was somewhat alkaline. Higher alkalinity is a component of modern spermicides.

The Ebers papyrus contained several recipes for curing impotence, and several of the mixtures may have helped. For example, carob is a common ingredient and has high levels of histamine. Mice with low histamine levels have exhibited decreased mating.

The ancient Egyptians placed the heart at the center of a network of vessels, “mtw,” which delivered fluids to various body parts. Functioning as a transportation system, the mtw conveyed air from the lungs and food nutrients from the gastrointestinal tract through the rest of the body. This network was integral to the health of the body and had many similarities to the current understanding of the cardiovascular system.

The pulse was particularly important because it carried information from the heart. Instructed to feel for the pulse with their fingers, student physicians would “measure the work of the heart,” for from the heart came both emotions and thought. In the centuries since, humanity has determined that thought originates in the brain, but modern language still attributes emotions to the heart. A citizen of ancient Egypt would immediately comprehend the statement, “My heart tells me that . . .”

The ancient Egyptians would not have considered magical incantations placebos, but the effect would have been the same. The Ebers papyrus states unequivocally, “Strong is the magic combined with the remedy, strong is the remedy combined with the magic.” Both the doctor and the patient would have entirely believed in the power of the incantations, mimicking double-blind placebo experiments today in which none of the parties concerned know who is receiving the placebo. The effect would have likely been even stronger in a culture that didn’t believe the placebo even existed. Modern experiments leave no doubt to the efficacy of placebos.

Despite understanding the transportation capacity of veins and arteries, the ancient Egyptians did not understand the entire connectivity of the circulatory system. They did not know the function of several internal organs, not even the brain. Many of their remedies seem to be dead wrong since they were often based on mythological connections or sympathetic magic. Nevertheless, because of an empirical reasoning process and a detailed diagnostic procedure, the physicians developed many effective cures for ills that plagued the people. As a whole, their medical achievements are extraordinary.