HomeStories8 Facts About the History of Beer You Probably Never Knew

8 Facts About the History of Beer You Probably Never Knew

The history of beer takes us back to the dawn of civilization. Few drinks have had a greater, or more long-lasting influence on mankind. 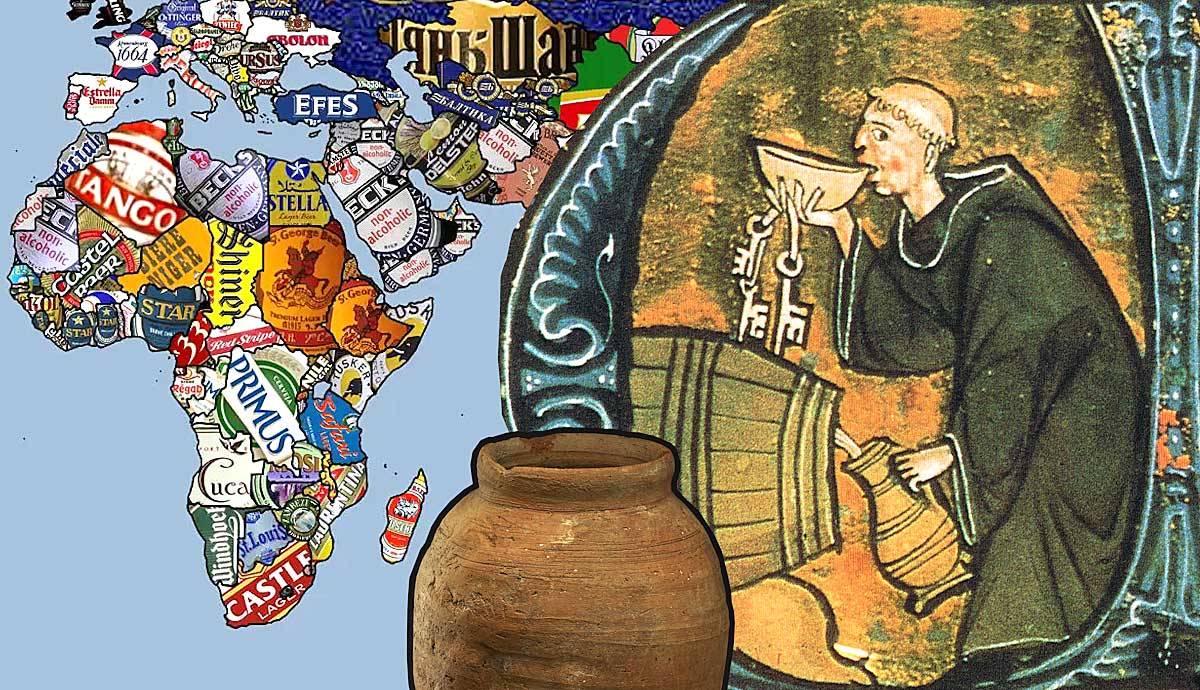 The history of beer goes back to the dawn of human civilization. This popular alcoholic drink appeared in the Neolithic, at the same time as bread (if not earlier) during the agricultural revolution, which set mankind on the path towards modernity through the adoption of farming, and the creation of the first settlements.

Unsurprisingly, ancient beer was originally made from grain. Hops only became part of the recipe thousands of years later, during the Middle Ages. The Babylonians and Egyptians had dozens of recipes for beer, and pharaohs were buried with jars filled with the tasty brew. Even workers were paid in beer. During the Middle Ages, beer spread all over Europe, and beermaking became one of the most important industries on the continent. After the Industrial revolution, it went global, turning into a 20th-century behemoth. Today, beer is the third most widely consumed drink, second only to water and tea.

1. The History of Beer Begins at the Dawn of Civilization

The history of beer is inseparable from the history of the human race. In fact, it is one of mankind’s oldest beverages. The popular fermented drink was not invented but discovered. History is not sure of the exact date or even the culture. However, it is known that the discovery of beer coincided with the end of the last ice age around 10,000 BCE and the agricultural revolution that followed. The domestication of the wild cereals within the region known as the Fertile Crescent led to the emergence of the first human settlements and, eventually, the rise of the first advanced civilizations.

It also led to a fortunate by-product. People realized that when the grains got wet, they would ferment. This fermentation process transformed water into a delicious drink, and so it was that the first beer was discovered. It is possible that the discovery of beer, fueled the agricultural revolution, as early people’s thirst for a fermented brew led to the development of technologies later used to make bread.

Our first recorded evidence for beer drinking comes from a pictogram from Mesopotamia, dated 4000 BCE. It also provides evidence for ancient beer drinking techniques, which differed from ours. Instead of just drinking it from a cup, the two figures imbibe beer from a large pottery jar through reed straws. The ancient beer had grains, chaff, and other debris floating on its surface, so a straw was necessary to avoid swallowing them.

2. Beer Was an Early Symbol of Friendship

Sumerian depictions of two people drinking through straws from a shared vessel suggests another important role of beer among the ancients — its social function. The straws were useful if not essential at the very beginnings of beermaking, but by the Sumerian period, the technique was refined, and the advent of pottery made them obsolete. That beer drinkers are, nonetheless, so widely depicted using straws, points to the social dimension of the beer drinking ritual.

Unlike food, people can share beverages. Thus, unlike meat, where some parts are more desirable than others, the drink always tastes the same. This unique quality led to beer becoming a symbol of friendship and hospitality. By drinking from the same vessel, the host would show his guest that the drink was not poisoned or low quality. The person offering the drink could be trusted. Gradually, beer began to be served in individual cups, but the custom of sharing a drink from one vessel persisted up to the present day.

People still drink beer from the same vat, tea or coffee from the same pot, or a glass of wine or whiskey from a shared bottle. When drinking alcohol with family, friends, or colleagues, the clinking of glasses symbolically reunites the individual glasses into a single vessel of shared liquid, reminding us of ancient drinkers from the long history of beer.

3. Beer Was a Currency

The sedentary way of life and the surplus of cereal grains — barley and wheat – freed a small fraction of the population from the need to work in the fields, allowing for the emergence of highly specialized professions — priests, administrators, and scribes. One of their main tasks was to collect taxes, paid in grain and other goods, and their processed solid and liquid forms — bread and beer. This made beer more than just a simple foodstuff. It became a convenient and widespread form of payment and currency in all the empires of the Fertile Crescent, from Sumer to Egypt.

The importance of beer is recorded in one of the first recorded laws. The famous Code of Hammurabi decreed a daily beer ration to citizens of ancient Babylon. The drink was distributed according to social standing: common laborers received two liters daily, while priests and bureaucrats got five. In ancient Egypt, beer was essential for laborers, like those who built the pyramids of Giza, who were provided with a daily ration of over 10 pints of the tasty brew. Despite traditional belief, it was not slaves but a paid labor force that built some of the most iconic buildings in world history. And it was the beer that fueled that labor.

Besides its economic and social value, ancient beer also had divine status. Partly this was due to the brew being a cornerstone of people’s diets. In addition, the ancients considered beer a safer alternative to water, as nearby rivers and canals could often become contaminated by animal waste. The process of fermentation boiled out harmful microorganisms while preserving nutrients absent from other drinks. Thus, it is unsurprising that, besides its use in religious ceremonies and rituals, beer was associated with the gods.

In fact, the first written beer recipe about beer comes from a poem the Hymn to Ninkasi a 3800-year-old ode to the Sumerian goddess of beer. The text, etched into clay tablets, praises the goddess and conveniently outlines the steps for brewing in such detail that modern researchers were able to recreate the ancient brewing process. Apparently, the Sumerians brewed good beer.

5. The Ancient History of Beer: Beloved by Egyptians, But Not Greeks and Romans

The ancient Egyptians, too, had a dedicated goddess of beer and drunkenness — Hathor. Actually, few early civilizations loved their beer as much as the society living along the Nile valley. Even the children were allowed to drink beer. Egyptian records mention at least seventeen kinds of beer, some of them referred to in poetic terms that remind us of advertising slogans such as “the beautiful and good”, “the heavenly”, “the joy-bringer”, “the plentiful”, and “the fermented”. The same applied to the beers used in religious ceremonies.

However, the ancient Greeks and Romans did not share the Egyptian taste for beer, preferring wine instead. To the Greeks, who appreciated moderation, beer, was a drink for the “barbarians”. The Romans shared the opinion of their Mediterranean neighbors. However, the Romans brought the brewing process to the northern limits of their Empire, spreading beer culture in colder areas where it was difficult, if not impossible, to plant vineyards.

6. Beer is a Medieval Success Story

The arrival of the Middle Ages revived Europe’s interest in beer. Surprisingly, Christianity was one of the main “culprits,” primarily due to the monks who modernized the brewing process, adding hops. As a result, medieval monasteries, places of frugal life and asceticism, became the first European breweries. The fast, prescribed by strict monastic rules, did not allow the consummation of food. But no regulation forbade beer, which also had considerable nutritious value. In addition, many monasteries north of the Alps were in areas suitable for beer brewing, such as Bavaria and Bohemia.

The monasteries were also one of the principal places of medieval education and repositories of knowledge. Thus, monks could experiment and further improve the brewing process. In the ninth century, brewers began to flavor beer with hops. In the process, they discovered its preserving properties.

In addition, monasteries were also stopping places on pilgrimage routes, and beer served as welcome nourishment for weary travelers. Thus, monasteries made beer a favorite alcoholic drink of the Middle Ages, available to all, from kings, bishops, and nobility, to the common folk.

For centuries the basic way to make beer was to boil malted barley with water and let it ferment. Sometimes, natural yeast did the vital work, but generally, the brewers would add yeast to speed up the process. The resulting mix would then be flavored with a mixture of various herbs. Adding hops improved the chances that the beer would not spoil, but the large variety of recipes continued to make beer-making difficult.

This all changed in the 16th century when to standardize beer production, the Duke of Bavaria, Wilhelm IV, introduced the Reinheitsgebot, or beer purity law, in 1516. The Reinheitsgebot essentially removed everything but water, hops, and barley from the list of acceptable brewing ingredients. Interestingly, the law also removed yeast from the recipe, which was only added back in, in 1857, after Louis Pasteur discovered yeast’s role in fermentation.

The Reinheitsgebot remained law for the next 471 years and was repealed only in 1987. However, while brewers respected the law in Germany, Holland, and Belgium, French brewers continued to use various herbs, spices, and fruits to add extra flavor to their beer.

8. The War on Beer: The History of Beer in Modern Times

Despite its sky-high popularity in the medieval and early modern period, and the spread of breweries and pubs all over Europe, beer continued to encounter resistance in its mission to take over the world. During the 18th century’s Enlightenment, Europe tried to restrict alcohol, focusing instead on coffee and tea.

Yet, beer continued to rise in popularity, and in 1765, the invention of the steam engine sparked the Industrial Revolution and, by extension, industrialized the beer brewing process. In addition, the introduction of the thermometer and hydrometer was a watershed moment in the history of beer, increasing beer-making efficiency.

The most dangerous blow to the history of beer came in the 1920s, during the Prohibition era in the United States. Although George Washington owned a brewery and Thomas Jefferson wrote the Declaration of Independence in a pub, the “land of the free” declared war on beer and other alcohol, making its consumption illegal. Prohibition (which ended in 1933) had an unintended effect. It introduced people to watered-down beer, with a lighter flavor profile, present even today, especially among mass-marketed beers.

Fortunately, in recent years, another invention has taken place. Craft beer, made in small private breweries (but also by big behemoth companies), made serious gains in the market, yielding a historically unprecedented diversity of styles. Craft brewers are even reviving ancient recipes: recently, brewers made a beer using the Ninkasi poem’s recipe, thus bringing the history of beer full circle.

Sargon of Akkad: The Orphan Who Founded an Empire

Sargon of Akkad: The Orphan Who Founded an Empire

10 Mesopotamian Inventions That Will Surprise You