HomeAncient HistoryFood in Ancient Egypt: What Did the Egyptians Eat?

Food in Ancient Egypt: What Did the Egyptians Eat?

Learn about the most common foods in ancient Egypt and how they were prepared as reflected in Egyptian art and archaeological remains. 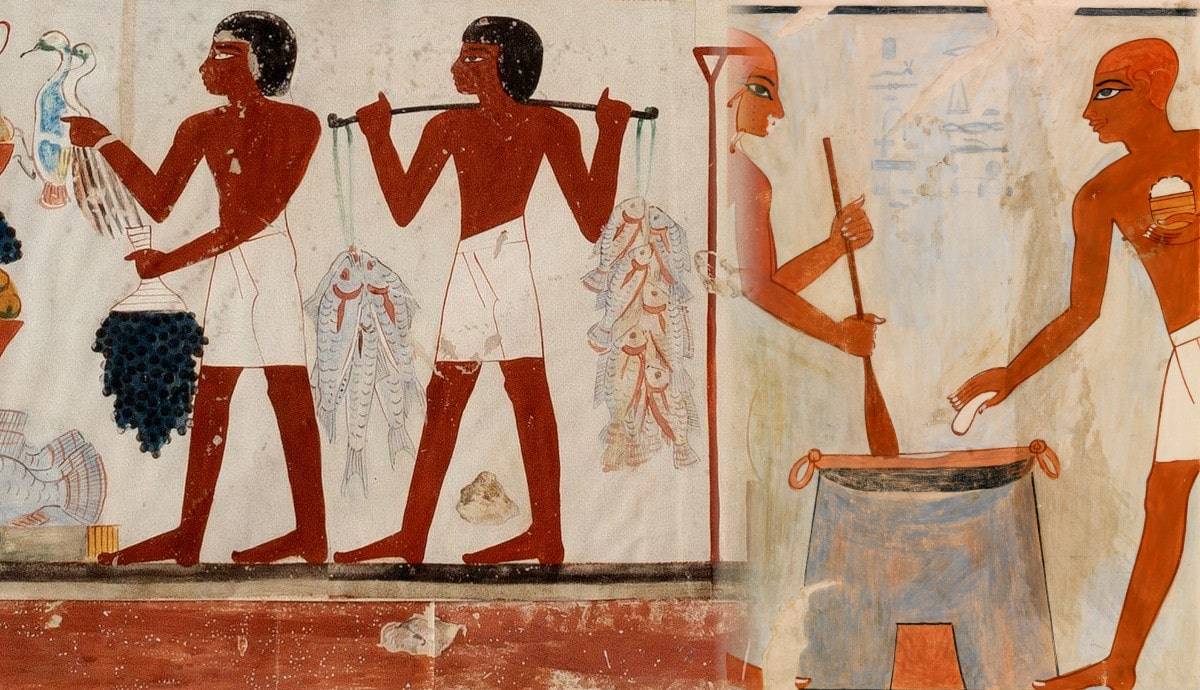 Food in ancient Egypt was an important part of culture and society, both in life and the hereafter. Temple walls were inscribed with the copious amounts of food offered to the gods. Tombs were decorated with images of overflowing offering tables and filled with jars and bowls of real food.

The tomb of Tutankhamun is best known for the magnificent golden artifacts found inside it. Lesser known are the foodstuffs that would have made the copious feast that he took with him to the grave. These included emmer wheat, garlic, chickpeas, lentils, cumin, watermelon, fenugreek and coriander seeds, figs, dates, dum palm fruits, Christ thorn, pomegranates, juniper berries, and almonds. Some of these were typical food in ancient Egypt, but others, such as the almonds, may have been foreign imports.

Archaeological evidence such as these food remains found in tombs are not the only sources we have for reconstructing the diet and food preparation methods of the ancient Egyptians. Artistic representations play a very important role, texts to a lesser extent, while experimental recreations of ancient food and beverages have come to have an increasingly important function in our understanding of the food diet in ancient Egypt.

Bread was the basic staple of the Egyptian diet. Every tomb owner’s first wish from those still alive passing by the tomb was 1,000 loaves of bread. From archaeological remains, art and texts, we know that the loaves could be made in many fanciful shapes, such as obelisks, geese, cattle, gazelles, humans, flowers, vases, fruit, and geometric shapes. Perhaps we can say the ancient Egyptians invented the animal cracker! Some of these loaves may have been meant to stand in as temple and tomb offerings for the more costly items that they represented.

The ancient Egyptians are well-known for their love of beer and it formed the second staple of their diet. Men, women, and children alike drank beer. Although children were introduced to beer drinking at a young age, school teachers warned young scribes in training against the intoxicating effects of alcohol by dictating such lines as the following to be written down by the student:

“Don’t indulge in drinking beer, lest you utter evil speech and don’t know what you are saying. If you fall and hurt your body, no one holds out a hand to you; your drink companions stand up saying, ‘Out with the drunk!’ If one comes to seek you and talk with you, one finds you lying on the ground, as if you were a little child.”

Wine was also consumed in ancient Egypt, but probably only by the upper echelons of society. Several recipes for wine found in a cookbook from 10th Century CE Baghdad describe Egyptian wine produced using the same methods documented in the art and archaeological remains of ancient times.

Egypt relied on cattle for sustenance from the earliest times. Beef was the high-status meat, and probably only those of high status enjoyed this food in ancient Egypt on a regular basis. Others would have had access to it at festivals and religious holidays when the temples redistributed the offerings to the gods to the poor people. The Egyptians distinguished nearly thirty cuts of beef. The foreleg was the most highly prized and is often depicted being offered to the tomb owner in tomb paintings.

Sometimes they fattened cattle by manual force-feeding to the point that the animal was so fat that it was unable to even walk by itself to the slaughterhouse. Meat could be eaten fresh after being stewed, sliced thinly and air dried, or salted.

Sheep and goat were also eaten but in lesser quantities. It is commonly misstated that the Egyptians did not eat pork, based primarily on the word of the Greek historian Herodotus and the fact that pigs rarely appear in Egyptian art. Archaeological evidence shows there is no truth to this. Pig bones with butchery marks on them are commonly found at settlement sites and there is even a mummy whose stomach contained tapeworm, which only could have been gotten from eating pork. More exotic meats the Egyptians consumed include gazelle, hyena, and even mice, something the ancient Romans also indulged in.

Poultry and More for the People

Much more readily available to the average Egyptian would have been a diverse and extremely numerous bird population. Chicken was not known in Egypt before the New Kingdom, but the Egyptians consumed many other types of birds: cranes, partridges, quail, geese, ducks, purple gallinule, European coot, avocet, flamingoes, pelicans, pigeons, and doves. Regardless of whether they were raised in a fowl yard or caught in some other manner, birds were killed by wringing their necks before plucking them. At this point, they could be preserved by packing them in jars of salt, cooked on a spit over a coal fire, or boiled. Like cattle, birds were force-fed cakes to fatten them up for slaughter, which means the Egyptians may have invented foie gras. Egyptians also ate eggs.

By far the most accessible protein food in ancient Egypt was the fish of the Nile and its canals. Although fish could have been eaten fresh, it was often air-dried or possibly even salted for keeping. A special fish by-product that the Egyptians enjoyed was salted, pressed fish ovaries, a treat known in French as “boutargue” and “bottargo” in Italian, which is still consumed in Mediterranean cultures today, including Egypt and is considered an aphrodisiac.

Dairy products were another food in ancient Egypt that was enjoyed widely. By far, the most important of these was milk; both cow milk and goat milk, while donkey milk was found in medical prescriptions.

Archaeologists have found remnants of what has been identified as cheese in several tombs and there are cheese strainers from domestic sites for making cottage cheese that have identical counterparts in modern-day Egypt. There was no sugar in ancient Egypt. Instead, the sweetener of choice was honey.

Vegetables, fruits, and beans were widely consumed foods in ancient Egypt. We just do not know how or even if they cooked them. With the obvious exception of the beans, people eat vegetables and fruits raw in Upper Egypt today, so therefore it might have been the case in ancient times as well.

The Cooks of Ancient Egypt

Men and women both engaged in cooking, although it seems from artistic representations, men did most of the food preparation in the temples and cooked for themselves in the fields. Being involved in the food preparation industry in ancient Egypt was not a high-status job and would be more on par with a modern burger flipper at McDonald’s than Julia Child. Those involved in fishing and fish preparation had to deal with a host of problems: crocodiles, insects, and competition with hungry birds bent on snatching their catch straight out of their boats. In a text used to discourage young boys from anything but a scribal career, the baker was said to have to stick his head in the oven while his son held onto his feet, and if his son happened to let go, he would fall headlong into the flames.

At home, it was the woman who provided the nourishment for the family, as we read in one wisdom text instructing a youth how to treat his mother with respect:

“Double the food your mother gave you, support her as she supported you; she had a heavy load in you, but she did not abandon you. When you were born…she was still yoked to you, her breast in your mouth for three years, as you grew and your poop was disgusting, she was not disgusted, saying, ‘What shall I do?’ When she sent you to school, and you were taught to write, she kept watching over you daily, with bread and beer in her house.”

It was the husband, however, that the wisdom literature instructed to provide the food in ancient Egypt, or at least provide his wife the means to do so. In reality, this wasn’t always the case. One woman wrote a letter to her sister asking her to make bread, saying that her husband had been arguing with her because her own mother had been questioning the amount of barley required for bread. The husband’s tirade was quoted in the letter:

“I will divorce you. Now your mother does nothing for you. Although you have brothers and sisters, they don’t take care of you. Now look, this is what you have done to me ever since I’ve lived here, whereas all people furnish bread, beer and fish daily to their family members.”

Husband and wife, on better terms with one another than the couple just mentioned, seated in chairs before an offering table full of all sorts of delicacies are one of the most common motifs in Egyptian art. But these are representations of the ideal meal the individual hoped to enjoy in the afterlife and did not necessarily reflect reality. Except in a handful of cases, those represented aren’t even actually eating, merely extending their hand toward the copious amounts of food. The representations of more ordinary meals are rarer, but informative. In the fields and in the marshes, the Egyptian peasant sat on the ground, his back supported by a papyrus structure. His meal was simple, a bunch of onions, a loaf of bread, perhaps some grilled poultry.

Other representations of banquets indicate that in any case, utensils do not seem to have been used, and at least sometimes, men dined separately from women and children. Each individual had his or her own little table of food. Men and women sat on the ground to eat, but only men sometimes sat on stools.

Legacy of Food in Ancient Egypt

Food in Ancient Egyptian reflected the bounty of Egypt’s agricultural society. While Egyptians today import a large amount of their food, one thing hasn’t changed. Bread is still Egyptians’ favorite staple, with the word for word for bread in Egyptian Arabic, “aish,” literally meaning “life.”