Explore Karnak Temple, one of the world's largest religious complexes, as well as a who’s who and what’s what of ancient Egyptian religion and history. 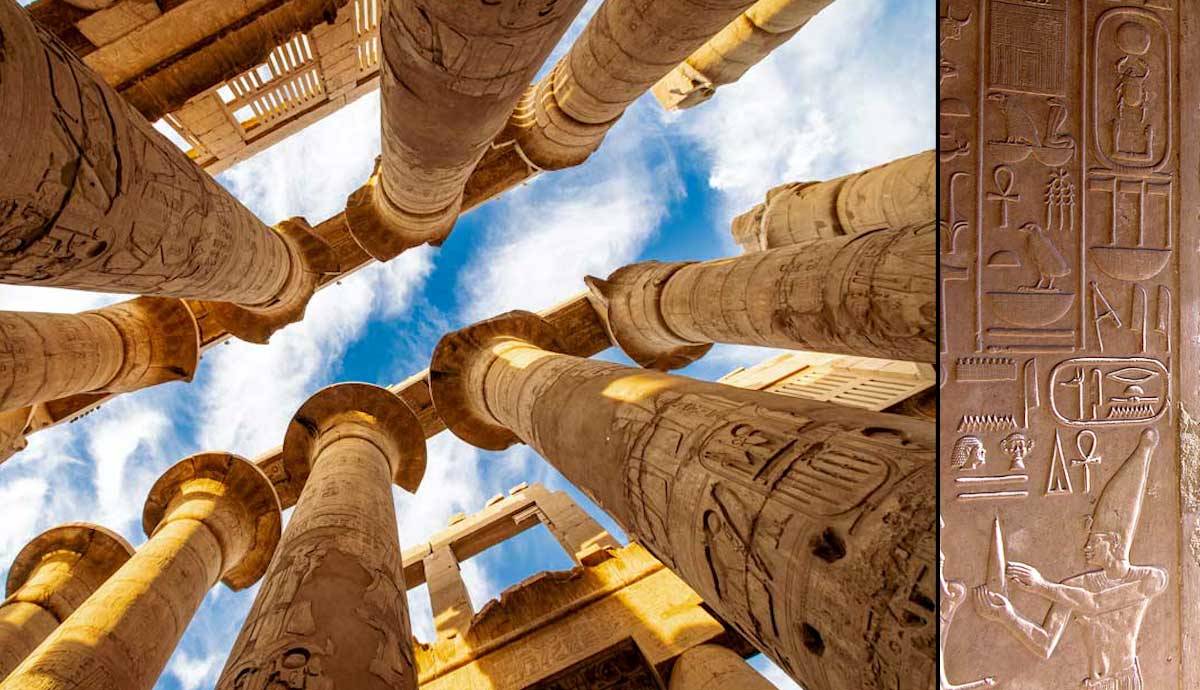 Karnak Temple is a bit of a misnomer because this religious complex, only surpassed in size by Cambodia’s Angkor Wat, is made up of multiple temples and structures. Karnak is a metaphorical department store of ancient Egyptian religion and history with structures built over 2000 years ago.

When you first arrive at Karnak, you will pass through a visitor’s center with a large diorama of the entire complex demonstrating its extent. You can even get a feel for it before you arrive by visiting Digital Karnak.

However, most guided tours only give you a quick trip to Karnak Temple’s spectacular hypostyle hall. It is approximately 50,000 square feet (5000 square meters) and has 134 massive columns, some as tall as 21 meters. While its construction was first started by Hatshepsut, most of the work was carried out by Seti I and his son Ramesses II. The hall stood the ravages of time until 1899 when an earthquake knocked 12 of the columns off their bases. These were reconstructed by French archaeologist Georges Legrain, which set off more than a century of amazing discoveries at the site that continue until the present day.

A visit to the hypostyle hall is breathtaking and will give you a new admiration for the engineering feats of the ancient Egyptians. However, if you stick with the well-trodden tourist path, you will miss out on so many more fascinating aspects of this temple. Let’s learn about some off-the-beaten-path parts of this structure that are worth exploring.

Egyptian deities were usually organized into triads, or family groups of a father, mother, and child. The main temple at Karnak was devoted to the worship of Amun-Ra, but smaller temples were dedicated to his wife Mut and son Khonsu. While the Temple of Mut is still under excavation and not open to visitors, the Temple of Khonsu is worth a visit.  It is not only one of the best preserved New Kingdom temples, but conservators recently cleaned its colored reliefs.

Exploring its inner chambers will give you a good idea of the riotously bright and colorful appearance that Egyptian temples originally had, in contrast to the rather dull tan appearance that many now have due to plaster and paint having faded and flaked off. Guards to the temple will likely take you to one of the chambers to see a well-worn deity’s phallus; these guards encourage men to rub it to “have children.”

As it is located at the end of the main temple axis, the so-called Botanical Garden of Thutmose III doesn’t get as many visitors as warranted by this unique example of Egyptian art. Thutmose III has been compared to Napoleon Bonaparte, both in his short stature and imperial ambitions. But also, like Napoleon’s Description de l’Egypte (1809), which documented and cataloged Egypt’s culture and environment in minute detail, Thutmose III had the exotic plants and animals he encountered during his military campaigns in West Asia carved on the walls of his temple.

A visit to the interior parts of Karnak Temple will give you a perspective on a structure that would have only been accessible to priests and royalty and was devoted to religious rituals. If you want to get an idea of the commoners’ experience, you need to circumambulate the temple from outside.

The southern side of the main temple axis originally featured scenes of the famous Battle of Kadesh where Ramesses II allegedly defeated the Hittites. While most scholars think the battle was a draw at best, Ramesses II seems to have had second thoughts and carved texts describing 15 years of military battles on top of them.

The northern side of the main temple axis features scenes of Seti I’s many battles in Western Asia and the defeated rulers presenting tribute to him.

The most sacred part of any Egyptian temple was the rearmost part, where the temple of the god normally rested. Only the high priests and kings could enter this chamber and come face to face with the deity on a daily basis. However, commoners had access to Amun-Ra, the chief deity of Karnak, via the Chapel of the Hearing Ear, which abutted the rear of the temple, just behind the Botanical Garden. They would leave stela inscribed with ears, hoping that the god on the other side of the wall would hear their pleas, whether it was for good health, success in a legal case, or another personal problem from which they suffered.

When you visit Karnak Temple, you may notice that one or more of the ten pylons on two axes that make up the main temple are in a semi-dismantled state. Archaeologists discovered that rather than use new stones to fill the pylons, kings dismantled the structures of their predecessors and reused them as filling for the pylons.

As these have been rediscovered, in some cases archaeologists have managed to reconstruct and rebuild the original structures and they have been set up in the Open Air Museum, which requires a separate ticket. Little visited, the White Chapel of Senuseret I is a Middle Kingdom architecture masterpiece that features finely chiseled hieroglyphs and the Red Chapel of Hatshepsut is a granite masterpiece shedding light on one of the few female pharaohs.

If you spend a long time at Karnak, at some point you are going to want to take a break and sit down. The best place to do this is at the café next to the sacred lake. While it only serves drinks, if you organize your visit through a tour operator, you can ask them to deliver you some lunch to enjoy while you look out over the waters where the sacred barks of the deities would sail during rituals. Otherwise, these barks rested in chapels like the White and Red Chapels mentioned above.

Nearby, you will see tourists being led around a giant sacred scarab statue seven times in a concocted ritual they claim will bring good luck.

The above are some of the highlights that most people miss, but the list is far from exhaustive. I find it fun just to wander about and see what I discover. Every time I go, I find something new. But your exploration of Karnak Temple doesn’t need to stop within the temple precinct itself. Read on for more Karnak-related stops that most tourists don’t see.

6. Avenue of the Rams

In 1949 Egyptian archaeologist Mohammed Zakaria Ghoneim uncovered the beginning of an avenue of ram-headed sphinxes, rams, and sphinxes at Luxor Temple. Over time, various archaeologists have continued to excavate these and uncovered 1057 that line the road all the way to Karnak’s tenth pylon.

In November 2021, it was officially re-opened to pedestrians in a blockbuster choreographed ceremony. You can now retrace the footsteps that the ancient priests of Amun-Ra took when they paraded his bark from Karnak Temple in a noisy public event reminiscent of the viral Coffin Dance. It’s a nice stroll in the late afternoon during winter months, but you might want to save it for evening in the summer.

After a full day at Karnak, you will be looking to cool down. A trip to Luxor Museum, air-conditioned and open in the evening, is a good way to do that. It’s an essential stop if you want a full picture of Karnak Temple’s treasures.

After righting the columns in the hypostyle hall, French archaeologist Legrain discovered a massive cachette of approximately 20,000 stone and bronze statues, statuettes, stelae, amulets, and other artifacts formerly used in the temple rituals and as votive offerings. Like the monuments used as filling in the pylons, the Egyptians didn’t simply destroy them, but buried them, probably during the Ptolemaic Period. It took Legrain several years to excavate the cachette, until the water table prevented further removal and he sent the whole lot to Cairo on a ten car train and two boats that needed to make 2-3 trips. The entire cachette has never been fully published, but several of the finest specimens from this trove are on display in the Luxor Museum.

Another example of Karnak Temple’s hidden treasures is a reconstructed wall of talatat from Akhenaten’s structures at Karnak. The first king to embrace monotheism, Akhenaten built his temple in an unusual way, out of very small blocks. These were then reused by his successors in the filling of the second pylon and as flooring of the Hypostyle Hall, with more than 100,000 recovered so far, about a third of them decorated. These are unlike the ritual and mythological scenes or ones showing military conquests that one normally expects in a temple. Instead, Akhenaten’s temple depicted mundane activities like sweeping the floor, building furniture out of palm fronds, and baking bread.

Karnak Temple continues to be the site of intense archaeological and restoration work today. Its many decorated walls and artifacts continue to yield new knowledge about ancient Egyptian religion, art, and history as scholars continue to explore its secrets.