HomeAncient HistoryWhy Does Everyone Look the Same in Ancient Egyptian Art?

Why Does Everyone Look the Same in Ancient Egyptian Art?

The statues and reliefs of ancient Egypt exhibit an overwhelming sameness. Learn how the rules and techniques for depicting the human figure influenced the unchanging appearance of ancient Egyptian art. 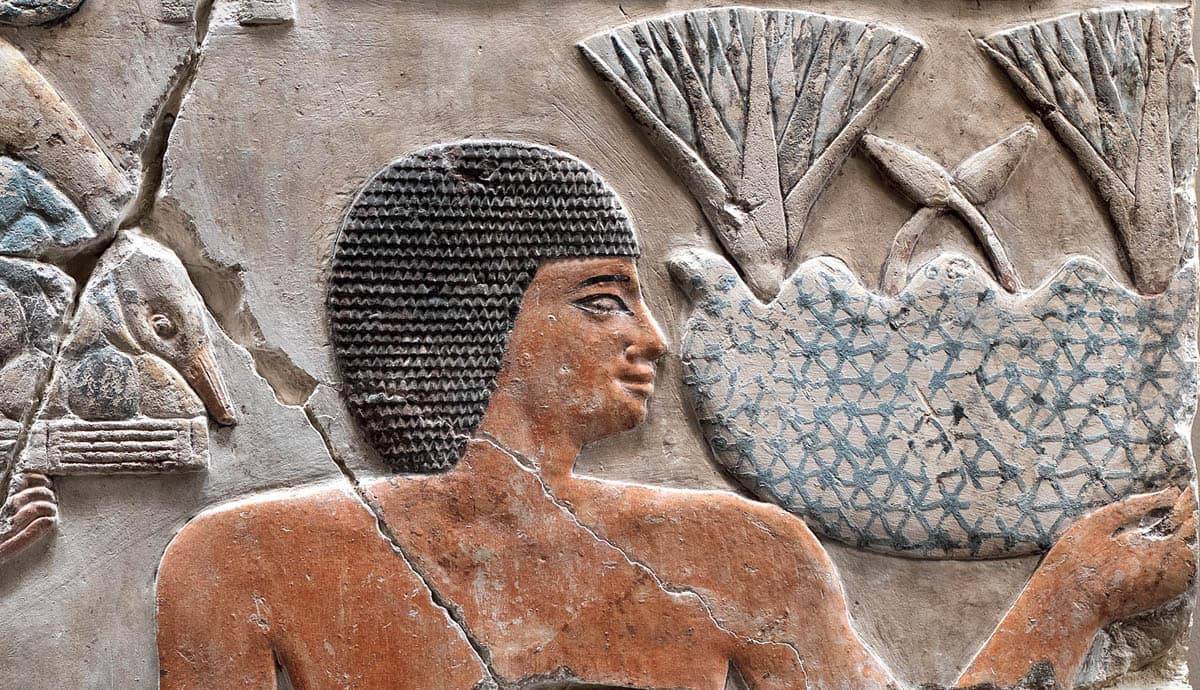 We know what several ancient pharaohs looked like because their mummies have been preserved, and we also know that subsequent kings often had very different appearances and were unrelated. So why do Egyptian figures in 2 and 3-dimensional Egyptian art look so similar to one another?

The Purpose of Ancient Egyptian Art

In order to understand why art in ancient Egypt was so similar, we need to understand its purpose and how it differed from the current day conceptions of art. The success of most famous modern artists of today is their unique style that also captures the essence of the subjects that they depict. Take Andy Warhol’s depiction of Marilyn Monroe. On the one hand, there is no doubt that he was painting the iconic actress, but on the other hand, his depiction is unique and follows a style uniquely his own.

Egyptian art lacked both this level of creativity and fidelity to life. Egyptian artists, in most cases, are anonymous figures who followed patterns and conventions slavishly. Art was not intended for visual appreciation, but rather served functional and propagandistic purposes.  In that regard, Egyptian art is closer to a Campell’s soup ad in a magazine than to Andy Warhol’s Campbell’s Soup.

Funerary art was intended to present and preserve an idealized status quo for eternity, with the tomb owner depicted at the prime of life surrounded by the people and things he needed to continue to enjoy a comfortable life in the afterlife. Religious art depicted the rulers honoring the unchanging deities in the same ways they had become accustomed to being honored by their predecessors. The outer walls of temples, on the other hand, were decorated with unfailingly victorious kings smiting and defeating their enemies. Statues, both private and royal, more often derived their identity from the names inscribed on them, having been mass produced in workshops.

Canon of Proportions and Perspective

The earliest ancient Egyptian art already shows themes well known for thousands of years. But it lacks the proportions and register lines that in part lent Egyptian art a rather uniform appearance. One reason for this is that the Egyptians used a system of guidelines and grids to lay out human figures. Regardless of how tall or short, or fat or thin someone really was, the relative space taken up by the different parts of the body in 2-dimensional art remained the same.

From the Old Kingdom onward, they divided this grid into 18 parts from the sole of the feet to the hairline, and this changed slightly over time, especially during the Amarna Period.  In Dynasty 25, a new grid system was introduced, with a total of 21 parts from the soles of the feet to the upper eyelid. Artists continued to use this system after the Pharaonic Period, with the latest known grid dating to Cleopatra’s reign. Likewise, the grid was used to layout figures horizontally at the armpits and feet, with different proportions for men and women.

Another reason that people in ancient Egyptian art looked the same is that in 2 dimensions, figures show various parts of the body as fully as possible. This is called an aspective view. While the overall figure is depicted from the side, the eye and eyebrow along with the shoulders are depicted as if seen from the front, with both arms and hands visible. One leg and foot are always advanced in front of the other, with both big toes visible. These conventions were followed in virtually all 2-dimensional art, and the number of diversions from it can be counted on a single hand.

Egyptian artists generally depicted people in the prime of life. Ancient Egyptian art depicted men and women as slim and fit. Their hair was full (or in some cases shaved) and black. A few rare creative artists depicted their subjects as obese or old, or from any perspective other than the standard ones. In fact, these depictions are so rare that the few instances that exist are well known and unique.

One exception to this rule was scribal statues, although even these showed a different idealistic portrait. A scribal career was desirable because it meant freedom from a life of hard physical labor. In fact, seated statues of scribes show them as flabby and out of shape, with rolls of fat on their chests.

Schools, where children learned to write and compose art in ancient Egypt, would have taught by rote and imitation. Even in the most basic children’s art, such as an ostracon showing a striding male figure holding a staff, the basic conventions were followed. Most schools that archaeologists have uncovered were attached to temples, and as such would have taught students to produce art that was standardized.

Plagiarism of art and architecture is not a modern practice. It also was common in ancient Egypt. Copying the art or texts of predecessors was how artists often composed new works. The Egyptians had a great reverence for the past and repeating it was more common than creativity.

In ancient Egypt, this is no better illustrated than in the famous motif known as the “Libyan smiting scene” which is accompanied by what is known as the “Libyan family scene.” We know this scene first from the Sun Temple of Sahure (which may have been copied from earlier scenes that don’t survive), but it is repeated many times in temples, up until the Temple of Kawa of Taharqa, dating to Dynasty 25.  It is clear these are exact copies divorced from historic reality because in all instances, a woman and two boys, presumably the family of the Libyan ruler, are shown together begging for mercy. In all cases, they also have exactly the same names!

Such “copying” (what Egyptologists call “archaism”) reached its zenith in the ancient Egyptian art of Dynasty 26 (the Saite Period). The art of this period drew heavily upon Old Kingdom and New Kingdom precedents. This was not simply a continuation of earlier traditions, but a wholesale attempt to mimic the past. However, it is not clear whether these were direct copies from one monument to another, or whether the artists simply were working from common pattern books. However, not only were these copies removed in time from the originals, but often in space as well. Many Dynasty 26 private tombs in Thebes having antecedents from regional cemeteries in Upper Egypt.

A famous wisdom text from Dynasty 12 (Teaching for Merikare) admonishes the reader to not engage in stealing the art and architectural works of others: “Don’t spoil the monument of another, but quarry stone in Tura. Don’t build your tomb out of ruins using what was made, for what is to be made.”

Nonetheless, reusing the works of predecessors in construction was a typical habit in ancient Egypt. Several pylons at Karnak Temple were filled in with blocks from temples of previous rulers. This habit continued into the Islamic Period, with ornate columns from Greco-Roman temples reused in the construction of mosques and the casing blocks of the Great Pyramid of Giza carted off to build the walls of Cairo.

Rameses II was one of ancient Egypt’s most prolific builders. In order to keep up such a ambitious building campaign, he resorted to usurping his predecessors’ temples and statues, rebranding them as his own. In some cases he simply used them as filler but he also took decorated blocks, turned them around, and had his own inscriptions and reliefs carved into them.

Rameses II had a penchant for reusing his predecessors’ statuary and passing it off as his own. We have enough statues of Rameses II that are the original work of his own artists to know the typical style. But there are a number of statues that clearly are not the original works of his artists. They simply changed the facial features, sometimes adjusted the proportions, added figures of his family, and/or replaced the original name on the statues with Rameses II’s.

A set of 9 or 10 statues that likely were produced at Memphis for Senusret I exemplifies this treatment. Ramesses II took these works, leaving some at Memphis and sending others to his new capital of Pi-Ramessses. Both sets were reworked, but clearly by different sculptors.

Rameses II certainly was not the first nor was he the last to rework statues. In fact, he was simply the most prolific. But what comes around, goes around. Some of the original owners of the works he reworked had usurped their predecessors’ works as well, and even Ramesses II’s works were subjected to later reuse.

We don’t know why the ancient artists reused the works of predecessors. Sometimes it may have simply been a practical matter. Reworking an existing statue took less effort than quarrying, transporting, and carving news stone.

In spite of its seemingly cookie-cutter nature and repetitive themes, Egyptian art wasn’t as uniform as it seems. As you become more familiar with Egyptian art, you will start to see distinctive differences that immediately date a piece of art to one period or another. These include hairstyles. clothing, carving methods, and other details. In spite of the need to follow specific conventions and the artists’ anonymity, each Egyptian put his mark on his own work in subtle ways.

Food Art: 10 Artworks That Will Make Your Mouth Water

Late Period Egypt: Who Was the Last Native Pharaoh?