From its first introduction in the Caribbean to its catastrophic reach into the indigenous communities in Alaska, smallpox slew the New World’s native populations with horrific efficiency. 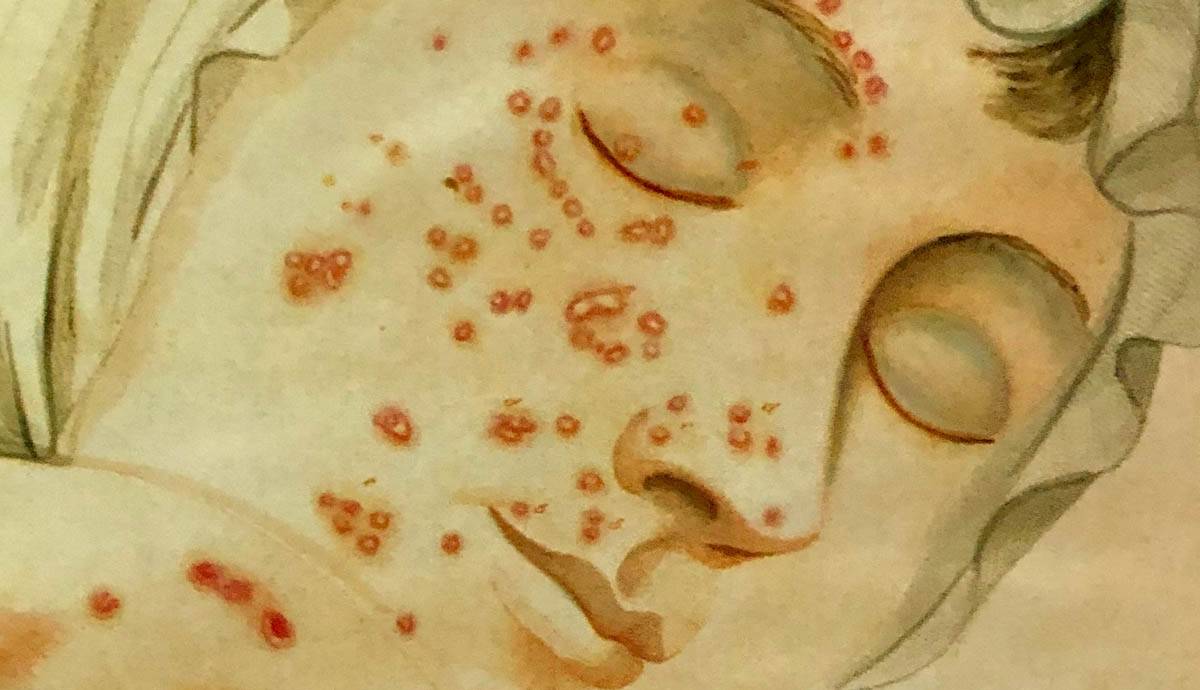 Christopher Columbus landed in 1492 on a still unidentified island. It may have been San Salvador, named in 1925, an island the Lucayan people once called Guanahani. Columbus christened it San Salvador at the time, but its exact location today remains a matter of debate. Its shadowy identity makes it a fit introduction for looking back at the peoples inhabiting what Europeans referred to as “the New World.” Many of their cultures disappeared into the mists from the intentional destruction of their conquerors and the unintentional ravages of disease, most notably smallpox.

In 1493, Columbus brought 1300 men to colonize Hispaniola. By 1503, eleven years after invading the Caribbean islands, the Spanish began a long history of importing enslaved Africans to work in the farms and mines of the New World. The first group arrived in Hispaniola, currently the Dominican Republic and Haiti. The new rulers likewise enslaved the native people. In 1507, the first smallpox epidemic struck, wiping out whole tribes on the island. It subsequently died out, but the labor pool was far smaller. The Spanish brought more and more enslaved people in to replace the native workers, and each ship carried the risk of another epidemic. Colonists arrived at a slower rate and in better condition, but they too contributed to seeding the disease among the Amerindians.

In December 1518, smallpox appeared again, initially among the enslaved Africans in the mines of Hispaniola. One-third of the remaining native people died of smallpox that year, but the disease did not remain on the island this time. It spread to Cuba and then Puerto Rico, killing half the indigenous populations on those islands.

The Physical Effects of Smallpox

Smallpox, which is now extinct due to mass worldwide vaccination programs, was a particularly unpleasant disease. The characteristic scars that permanently marred the survivors’ faces were the least of it. A virus incubated and spread only by human beings, its origin is unknown, and it may never be because there remain only two places in the world retaining the original lethal version of the Variola virus. Access is limited, if not impossible, for further studies, as it is far too lethal.

Spread easily through the air or from contaminated objects, about twelve days pass between acquiring the germ and developing the initial symptoms, which are deceptively benign. The first stage of the disease mimics the flu as the body tries to fight off the initial invasion. In the second stage, the temperature falls to almost normal. The microbe journeys through the lymph system, replacing cells in the liver and spleen by commandeering the human DNA and adapting it to its own use. Finally, the virus leaks out or bursts from the cells, enters the bloodstream, and appears on the skin as a rash.

The most common type of smallpox which most people in Europe were infected by, often as children, had a fatality of 30%. The rash became leaky pustules which eventually deflated, forming scabs. When the scabs fell off, scars remained. In two to three weeks after first becoming sick, the patient began to recover if he would survive.

The Aztecs encountered smallpox at a critical time in their defense against the Spanish. Cortes and his small army entered Tenochtitlan in 1519 and held Moctezuma II captive. At the same time, the governor of Cuba, suspicious of Cortes, had sent ships led by Panfilo de Narvaez after him. Onboard one of the ships was an enslaved African, Francisco de Bagua, who fell ill. A short stop at the island of Cozumel deposited smallpox there, and on April 23, 1520, the ship arrived on the coast.

Cortes left a contingent in Tenochtitlan and went to stop the incoming ships from deposing him.  He, his men, and his Native allies took Narvaez by surprise, overcame them, and returned to Tenochtitlan, gathering allies among the indigenous tribes who the Aztecs had harshly treated. Upon his return, he found that the foothold he had gained over the Aztecs had disintegrated.

Having been killed by his own people, Moctezuma II was succeeded by his brother, Cuitlahuac. The latter was, by all accounts, a capable, charismatic leader and unwilling to capitulate to the Spanish. He and the people of Tenochtitlan fought and forced out the Spanish. Upon retreating from the city, Cortes discovered that many of his allies had been struck by smallpox. The leaders of both Tlaxcala and Chalco Province died of it. Cortes chose their replacements.

In the meantime, smallpox began its attack on the capital of Tenochtitlan. The death toll was staggering. Fray Toriba Motolinia described it in The History of the Indians of New Spain:

“In many places it happened that everyone in a house died, and,

from the dead bodies so that their homes became their tombs.”

When Cortes returned, he besieged the city, and between starvation and disease, he completed the Spanish conquest of the Aztec Empire.

When a lieutenant in Cortes’ army entered Mayan territory, he discovered that half of the Native population, the Kaqchikel, had already died from smallpox. The Mayans have a record that the first epidemic occurred in 1518 from trade expeditions from Hispaniola. The second epidemic raged from 1520 to 1521. While Cortes was busy overcoming the Aztecs with the help of the disease, the virus was hard at work further south.

The disease seemed to favor the arrivals to the New World because both the Europeans and the enslaved people who accompanied them had often already had smallpox as children. For those who believed in divine intervention among human affairs, which was almost everyone at the time, the evidence was overwhelming that God, or gods, favored the invaders and their religion. The missionaries who followed the invaders reinforced this idea.

The Inca territory ranged along the Andean mountains, including most modern-day Peru, Bolivia, Chile, and part of Ecuador. Connected by a network of roads, the emperor, Huayna Capac, commanded a vast territory. While leading an army in the northern part of his empire, he received word of a terrible illness that had slain his brother and sister, an uncle, and other family members. Huayna Capac returned home to his palace near Quito and immediately fell ill himself. When he decided that he would not recover, Huayna Capac had his attendants seal him in a stone room. Eight days later, they unsealed the entrance and removed his body. During his reign of 31 years, Huayna Capac had doubled the size of the empire.

The epidemic continued to ravage Quito, the capital. Many of the military officers died, including the king’s immediate successor. Huayna Capac’s second son, Huascar, and an illegitimate son, Atahualpa, began a five-year civil war, with Atahualpa eventually emerging as the victor. When Francisco Pizarro arrived in 1532, both the epidemic and the Civil War were over. Pizarro executed Atahualpa. In 1533 and 1535, smallpox raged again in Quito.

The Araucanian Indians in Chile encountered smallpox in 1554 brought by Spanish soldiers. It was written that out of 12,000 Amerindians, only 100 survived.  In Brazil in 1555, the French Huguenots brought the dreaded disease to the place that was to become Rio de Janeiro.

While the rest of the Western Hemisphere suffered through repeated smallpox epidemics, there was no known occurrence of the disease north of Mexico until the 17th century. From 1617 to 1619, ninety percent of the indigenous population of Massachusetts was struck down, including the Iroquois.

In 1630, the Mayflower landed with twenty infected people, but it wasn’t until 1633 that a severe epidemic rose among the Native Americans. The following year, Dutch traders began a seven-year disastrous sweep of the disease from the Connecticut River to the St. Lawrence River. This, the smallpox epidemic almost completely wiped out the Huron tribes.

Jesuit missionaries arrived in Canada and tried to baptize as many people as possible, but many of the Native people believed that the baptisms were causing people to die. They may not have been entirely mistaken. The baptisms certainly may have helped spread the virus as it entailed missionaries traveling from house to house and converts kissing a crucifix. When the Native Americans met with the Jesuits in the late 1600s, they explained their position:

“This disease has not been engendered here; it comes from

without; never have we seen demons so cruel. The other

maladies lasted two or three moons; this has been persecuting

us more than a year. Ours are content with one or two in a

family; this, in many, has left no more than that number and in

many none at all.”

When smallpox struck down the indigenous peoples, although the missionaries were genuinely dismayed, the general attitude, as attested to by letters at the time, was that smallpox helped clear the land for the incoming colonists. While New Spain tried to alleviate the spread of the disease if only because the death tolls cut into their economy and required more slave labor to be shipped in, the colonists of the future United States and Canada actively supported its spread. Infecting “gifts” to be delivered to the Native Americans was not a common practice but did occur by both individuals and military commanders.

Nevertheless, smallpox did affect the colonists themselves. It became obvious that the recurrent epidemics arrived on ships from Europe and the West Indies or Africa. The colonial populations were likely not numerous enough to maintain the disease endemically, but the death tolls skyrocketed whenever a ship arrived with an ill passenger. The coastal towns with ports were vulnerable. Quarantines and isolations of ships became standard.

The rapid rise of the universities on the east coast was largely due to smallpox. The wealthy had been sending their sons back to England to be educated, but that was, too often, a fatal choice.  In fact, Queen Mary II established the William and Mary College in 1693. Coincidentally, she herself died of smallpox the following year.

In the meantime, smallpox continued to spread west among the original inhabitants of the land.  The Quapaw in Arkansas, the Biloxi in Mississippi, and the Illinois were viciously depopulated. The current area comprising New Mexico first experienced smallpox in the early 1700s, probably brought by the Spanish missionaries. In 1775, both California and Alaska experienced epidemics. Canada and the Midwest experienced epidemics from 1779 to 1783.

The following decades brought numerous epidemics among all the nationalities inhabiting the Western Hemisphere until variolation and eventually vaccination arrived. Nevertheless, despite vaccines and antibiotics, it would be a mistake to underestimate the power of the microbial world over the human body. Awareness begins with understanding the horrific impact that the smallpox virus has had on history and people.