The Ancient world was not a stranger to pandemics. Here are the 4 deadliest plagues that caused widespread death and decline, changing the history of the ancient Mediterranean. 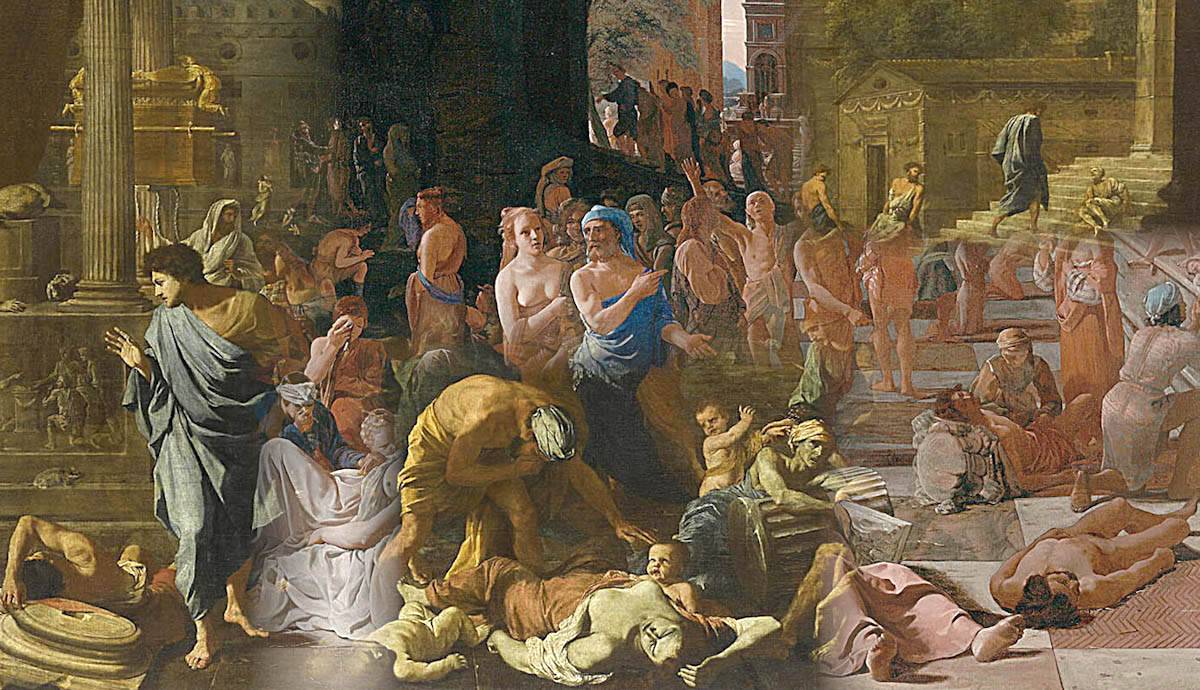 From the notorious ten plagues of Egypt to COVID-19, pandemics have always been a part of human civilization. Large numbers of people and animals living close to each other, coupled with low sanitation and malnutrition, could easily fall prey to an invisible enemy. The rise of cities, the growth of ancient empires, and the expansion of trade routes facilitated the spread of infections, causing the first global pandemics. Unlike today, the ancients were unaware of germs. Nor did they have a cure for many deadly diseases. Instead, they considered diseases divine retribution, a punishment for their sins. Instead of a vaccine (which would not appear until the 19th century), religious zeal and violence against ‘suspicious’ minorities became their preferred treatments.

Eventually, pandemics abated, but not before shrinking the population, ruining the economy, causing social disorder, and weakening the state. Roman physician Galen who lived through one of those deadly pandemics, left us some of the most detailed descriptions of the dreadful symptoms and the very name that remained in use until today: plague or pestilence (pestis). Here are the four worst pandemics in the history of the ancient world; the plagues that struck the ancient Mediterranean and changed the course of the world’s history.

The year was 429 BCE, and the Second Peloponnese War was not going well for Athens. To prevent the defeat from Sparta, the Athenian general and statesman Pericles ordered his people to withdraw and hide behind the city’s sturdy walls. According to the contemporary historian Thucydides, this was the moment when the disaster struck. Doom did not come from the spears of Spartan hoplites, but from something far more sinister – it was an invisible enemy, which would enter history as the first recorded pandemic named The Plague of Athens.

The Plague of Athens had probably arrived by ship to Piraeus a year earlier, having first ravaged Egypt and Northern Africa. People clustered in close quarters (many of whom were refugees hoping to find security behind the city walls) facilitated the rapid spread of the plague. Thucydides, always a man with a penchant for detail, described the symptoms.

In the beginning, the Plague of Athens was harmless: fever, sneezing, and a sore throat. However, the situation soon worsened with the infected suffering from violent coughing and horrible chest pains. Then their skin became red and covered with lesions. Many people were in good health when they got infected but died within ten days after experiencing the first symptoms. Their body temperature was so high that they could not tolerate clothing and repeatedly asked for water that they could not hold down. Those who tried to help became victims themselves, which resulted in the abandonment of the infected. The symptoms point to typhoid fever – a deadly disease that still kills more than a hundred thousand people in developing countries every year.

The rapid spread of the Plague of Athens and the mounting deaths caused panic among both Athenians and refugees. Thucydides reports a complete breakdown of social order and abandonment of religious practices. When the pandemic finally wore itself out, the death toll was staggering. Around 75 000 to 100 000 people perished, including Pericles himself. Athens lost the war, partly due to the impact of the plague, but life continued more or less as it had before. This pattern would repeat itself in most later cases. The deadly disease significantly weakened. Although the Plague of Athens has gone down in history as one of the worst pandemics, it did not topple the empire.

According to a report of the late Roman historian Ammianus Marcellinus, one of the worst pandemics that struck the Roman Empire was the result of a curse. During the sack of Seleucia (in modern-day Iraq), Roman soldiers widened a narrow crevice in the temple, unleashing the deadly disease that would later be known as the Antonine Plague. Nowadays, we have discovered that the plague originated in China and spread westward along the Silk Road. Yet, there is a grain of truth in Ammianus’ account.

The Antonine Plague (named after the Antonine dynasty) struck the Empire in 165 CE, during the co-rule of emperors Lucius Verus and Marcus Aurelius. Roman soldiers encountered the disease while besieging Seleucia. Τhey carried it to Rome upon their return from the campaign. Thus, the disease quickly spread across the imperial territory – from the capital to its frontiers.

The physician Galen described the symptoms and performed autopsies on the infected. The disease began with a fever but soon turned nasty: a sore and swollen throat accompanied by diarrhea, gruesome skin sores, pharyngitis (inability to swallow), unbearable thirst, coughing, and vomiting. The infected suffered roughly two weeks. Those who did not die developed immunity against further outbreaks. Galen’s observations pointed to smallpox or measles.

One of antiquity’s worst pandemics, the plague waxed and waned for a generation, peaking in the year 189. On that date, historian Cassius Dio reported up to 2 000 people in Rome dying daily from pestilence. Scholars believe that 5 million people died from the disease, although the number could be as high as 7-10 million. The plague possibly killed Lucius Verus, the emperor himself. Enormous losses weakened the Empire, hitting the economy hard and devastating its army. The barbarian invasions, which Marcus Aurelius repelled with great effort, were the indirect consequence of the Antonine Plague.  Seeking a scapegoat, Marcus Aurelius persecuted the Christians for their refusal to participate in religious ceremonies. The fledgling religion, however, persisted, and even got many new members. The pandemic finally petered out in 180 CE, only to return in force seventy years later.

The Plague of Cyprian acquired its name from St. Cyprian, the bishop of Carthage who recorded it in detail. His was the first Christian account of a pandemic. Cyprian’s testimony has a strong focus on morality and acceptance of death. He describes the epidemic as a precursor to the end of the world. Yet, it also presents a vivid image of the progress of the disease and its effects.

The first symptom (as was the case with earlier pandemics) was fever, followed by general weakness/fatigue, sore and swollen throat, hearing impairment, diarrhea, vomiting, and possibly blindness. Like the Antonine Plague, one of Rome’s worst pandemics arrived from the East. It is believed that the disease originated in China, traveling along the Silk Road to Alexandria. Once it reached the Egyptian metropolis, the grain ships carried it all over the Roman Empire. Since the disease arrived seventy years after the first outbreak, the people who had previously developed immunity were all gone by the time it struck. Thus, the new wave was particularly deadly. At the height of the pandemic, from 250 to 262, up to 5,000 people died daily in Rome.

This time the Christians played an important role, taking care of the infected. Their charitable behavior helped to win new converts and strengthened the religion further. If the Antonine Plague weakened the Roman Empire, then the Plague of Cyprian brought the Empire to its knees. To make matters worse, the pandemic hit Rome in its darkest hour, during the so-called crisis of the third century. During this tumultuous period, ambitious soldier-emperors tried to keep the fragmenting state together, fighting both external and internal enemies, and the deadly disease. The emperors Hostilian and Claudius Gothicus both fell prey to the plague. Yet, the Roman Empire survived, despite death and terror on a scale no one had ever seen.

One of the worst pandemics in human history hit the Eastern Roman Empire (also known as the Byzantine Empire) in the mid-6th century CE. The first wave of the pandemic, named after emperor Justinian, swept through the Mediterranean, killing up to a quarter of the Empire’s population and possibly as much as 10 percent of the world’s population. The Plague of Justinian is the first documented case of bubonic plague, a pestilence that would trouble Europe in the centuries to come. Its cause was the bacteria Yersinia pestis transmitted by fleas carried by rodents, mainly rats.

The Plague of Justinian originated in Egypt in 541. From there, it traveled on grain ships to the imperial capital, Constantinople. At the time, this was the largest city in the world. As such, it was an ideal stage for one of the most horrendous episodes in human history. The course of the pandemic is chronicled by the historian Procopius in nightmarish detail. The infected first experienced high fever and fatigue before swelling buboes broke out around their ears, in their armpits and groin. Next, people became delusional before falling into a deep state of coma, dying within a week of contracting the disease. Justinian himself was stricken, but he managed to recover. Unfortunately, the rest of Constantinople’s residents were not so lucky.

At its height in 542, the disease killed 5 000 people per day. People died faster than they could be buried. The emperor ordered vast pits to be dug to dispose of the rotting corpses. When those got filled up, bodies were stuffed into towers, with quicklime poured over to accelerate decomposition. Furthermore, ships filled with bodies were pushed to the Sea of Marmara and set alight. Constantinople came to a standstill. Food was scarce, and law and order broke down. By the time the Plague of Justinian petered out, nearly half of the city’s populace was dead.

The disease spread all across the Empire, causing widespread famine and devastation. One of the ancient world’s worst pandemics, the Plague of Justinian paralyzed the economy and threw a wrench into Justinian’s plans of reconquest. By the time of the outbreak, the imperial armies had recovered northern Africa, southern Spain and were on the verge of taking back Italy. The plague’s influence on imperial politics and its expansion is nowadays hotly debated, but the pandemic certainly played a significant role in weakening the Empire. The plague of Justinian in the 540s and its recurring outbreaks throughout Europe and the Middle East until around 750 CE claimed an estimated 25 to 50 million lives, about half of the world’s population. Although the plague of Justian was undoubtedly one of history’s worst pandemics, the Black Death, whose total death toll reached 200 million, would have a more catastrophic impact.

Who Was Pericles, the Architect of the Athenian Golden Age?