Beginning in 541, the devastating Plague of Justinian tore through the Byzantine Empire – this was the start of the first of three major plague pandemics in recorded history. 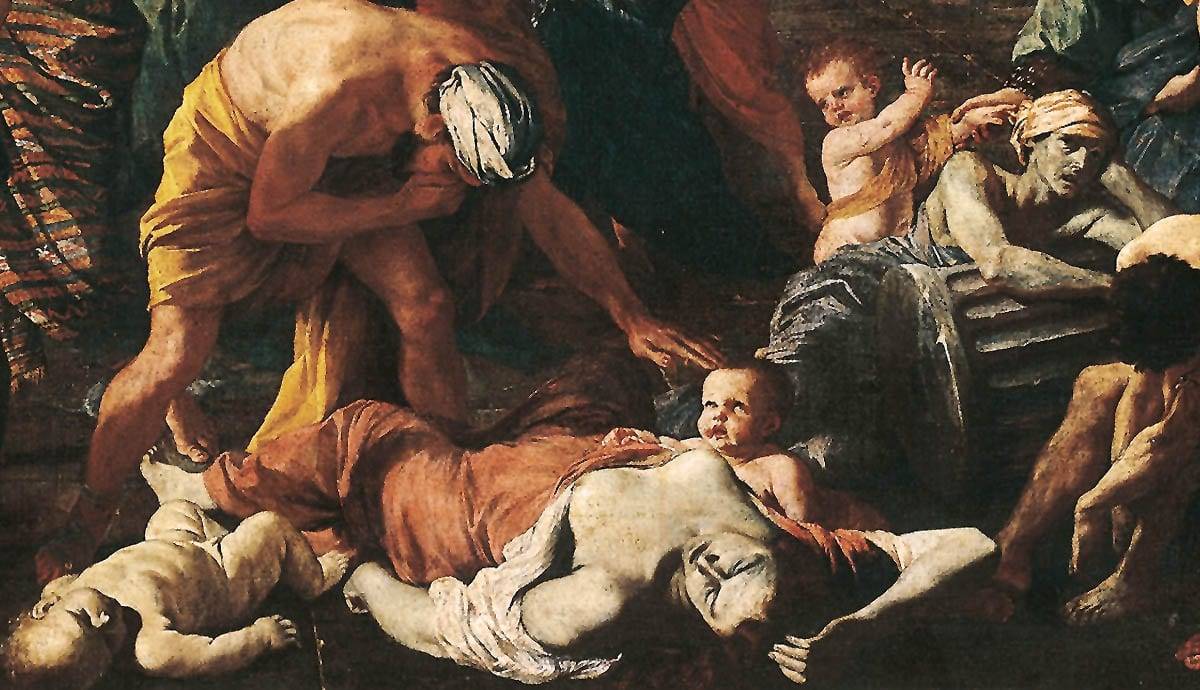 The devastating plague tore through the Byzantine Empire, which was ruled by Emperor Justinian I. This was the start of the first of three historical plague pandemics, the second being the Black Death in the 14th century, and the third being the plague pandemic of the 20th century. Although the first wave, often labeled the Justinianic Plague, or the Plague of Justinian, lasted until 549, the pestilence reoccurred regularly for around 200 years, persisting well into the 8th century. As a result, historians have identified the first plague pandemic as one of the deadliest in history, responsible for the deaths of between 15-100 million people, representing 25-60% of Europe’s population at that time.

Origins of The Plague Of Justinian

The origins of diseases (in medicine, known as Etiology) are extremely hard to pinpoint, even in the modern age. When it comes to historical plagues and pandemics, the image that science can paint is even less clear, and we are forced to rely on potentially inaccurate historical accounts for information. The beginnings of the first plague pandemic and the Plague of Justinian are no exception to this rule.

However, we do know for sure that the plague originated in the East. However, contemporaries also suggest that it may have come north to Europe from Africa. The plague was first reported within the boundaries of the Byzantine Empire but was initially observed in Egypt in 541.

The plague’s eastern origins, along with the fact that its symptoms were quite similar to those of the Black Death, have led to a great deal of speculation about whether or not these two diseases were actually the same.

This suspicion was confirmed in 2013. Researchers were able to substantiate that the Justinianic outbreak was caused by the bacterium Yersinia pestis, the same organism that caused the Black Death. Both ancient and modern Yersinia pestis strains were discovered in the Tian Shan mountains, suggesting that the disease may have originated from there.

The Plague Spreads To Europe

One of our primary sources for the Plague of Justinian is Procopius of Caesarea, a prominent Byzantine court scholar and historian. His account identifies Egypt as the entry point for the plague into the Byzantine Empire. More specifically, it began the spread at the port of Pelusium in the eastern Nile Delta of Egypt. From there, the plague was carried across the Empire both by land and sea.

By the year 542, the plague had reached the city of Constantinople and with devastating consequences. The Byzantine capital was an enormous metropolis, perhaps with some 300,000-500,000 people in the 5th century. As a result, it required vast amounts of grain in order to feed its population. This was such an important political consideration that the government itself ensured that sufficient grain reached the city. The majority of this grain was imported directly from the highly fertile land of Egypt. Thus, due to their grain trade with Egypt, the Byzantine capital was struck by the Plague of Justinian. The spread was likely a result of rats stowing away on grain ships.

Crisis In The Byzantine Empire

In recounting what happened once the plague reached Constantinople, Procopius paints us a dire picture of the disease’s effects upon the city. He reports that for four months, the plague tore through Constantinople, totally overwhelming the city’s authorities to the point where bodies were left lying in the streets as there was no room to bury them. Funeral rites could not properly be observed as there were simply too many people dying—the entire city stank of death and decay. As the burial grounds filled up, people resorted to digging vast burial pits to contain bodies and even dumped some into the sea.

Although the number of 10,000 dead per day that Procopius gives us is likely an exaggeration, his writing does give us a sense of the scale of the death and disruption that covered the Byzantine capital. Historians have estimated that the actual death rate at the height of the plague in Constantinople was likely closer to 5,000 deaths a day, which is still an astounding number. Between 20 and 40% of the population of the city would eventually succumb to the disease.

Reportedly, both Procopius and Emperor Justinian himself caught the plague – although they were both extremely ill, neither died from the illness.

In much the same way as the pestilence entered Constantinople, it spread around the Byzantine Empire and was particularly terrible around the Mediterranean. Thanks to the conquests Justinian had achieved during his early reign, recently reinvigorated trade routes across land and sea transported the deadly plague bacteria. In the countryside, farmers’ crop yields reduced drastically, leading to food shortages in Constantinople.

Naturally, the Empire’s tax revenues also plummeted. In his book Secret History, Procopius detailed Justinian’s harsh response to this crisis – supposedly, the emperor continued to demand the usual annual tax contributions from his subjects and even required communities to make up for the shortfall that had been caused by the deaths of their neighbors.

Later outbreaks of the Justinianic Plague wreaked havoc on the city of Rome.

The plague also weakened the Empire’s ability to resist its enemies because it killed thousands of Byzantine soldiers, effectively leading to reduced garrisons. The progress of the epidemic also prevented military units from recruiting new soldiers, as the population of the Byzantine Empire had decreased significantly.

This military decline left Justinian’s newly-conquered territories seriously vulnerable to invasion and prevented him from fulfilling his vision of reconquering the territories of the old Western Roman Empire. In 568, the Lombards invaded and captured northern Italy, defeating the small Byzantine army stationed there and fracturing the political unity of the peninsula.

In the east, the effects of the plague left Byzantine troops less capable of resisting the encroachment of Arab forces – beginning in the 630s, the Empire swiftly lost its southern provinces to Arab Muslim conquests. In northern Africa, Justinian was forced to scale back his operations against the Vandals; and in Italy, he was forced into a defensive stance against the Goths.

Not As Deadly As First Thought?

However, for all the apocalyptic imagery conjured up by contemporary authors, recent research has suggested that the Justinianic Plague was not as devastating as first thought. Perhaps thanks to its similarities to the deadly Black Death of the 14th century, the Plague of Justinian has been overestimated.

Through analyses of various data sets such as inscriptions, pollen counts, coinage, DNA samples, and mass graves, researchers concluded that the plague was not nearly as severe as the Black Death. We can say with far more certainty that the Black Death killed tens of millions of people across Europe. For example, pollen counts, which are good indicators of population size and stability, did not vary significantly during and after the Justinianic Plague. Coin circulation remained relatively constant as well. Additionally, mass burials classed as five or more people do not appear to have suddenly increased during the 540s.

Aside from the almost apocalyptic, sensational accounts of a handful of authors such as Procopius and John of Ephesus, very few written sources attest to a severe decline in political stability or economic activity. John Haldon of Princeton University suggested that “the idea that [the Plague of Justinian] was a blanket catastrophe affecting all parts of the Mediterranean, Middle Eastern, and central and western European worlds needs to be rethought.”

Epidemiology And The Plague Of Justinian

As previously mentioned, the Plague of Justinian is considered to have been the first historically recorded Yersinia pestis epidemic and likely originated from Central Asia. However, some scientists have suggested that it actually began in Sub-Saharan Africa, pointing to the fact that Sasanian Persia was affected by the plague later than the Byzantine Empire, despite being situated further east.

When Yersinia pestis DNA was found on Justinianic Plague victims from Germany, the most similar known variations were discovered in the modern strains from the Tian Shan mountains in modern China, Kazakhstan, and Kyrgyzstan. Furthermore, an ancient skeleton from Tian Shan dating from 180 AD was found to have a very similar strain, suggesting that nomadic peoples moving westwards across the Eurasian Steppe may have had a role in spreading the Plague of Justinian.

Despite Justinian’s efforts to continue to raise taxes and campaign abroad, the plague had a profound effect upon the Byzantine Empire. The pandemic affected the Empire at a crucial point, just when it was on the brink of recapturing Italy and the western Mediterranean, which would restore the heartlands of the former Western Roman Empire.

The spread of the plague weakened Byzantine armies, allowing the Goths, Vandals and Lombards a brief respite – eventually the Lombards invaded Italy in 568, pushing the Byzantines into the south of the peninsula. Although the severity of the plague has been called into question by recent research, and plague outbreaks were a more common occurrence in antiquity, the Plague of Justinian was undoubtedly viewed as a dire disaster by contemporaries.

Justinian in Procopius’ Secret History as “A Demon in Human Form”

Justinian in Procopius’ Secret History as “A Demon in Human Form”