HomeStoriesSimilarities Between Mayan and Aztec Gods and Goddesses

The pantheon of Pre-Hispanic deities was composed of a wide variety of gods, to which the ancient inhabitants of Mexico worshiped, having one deity for every aspect of their lives. 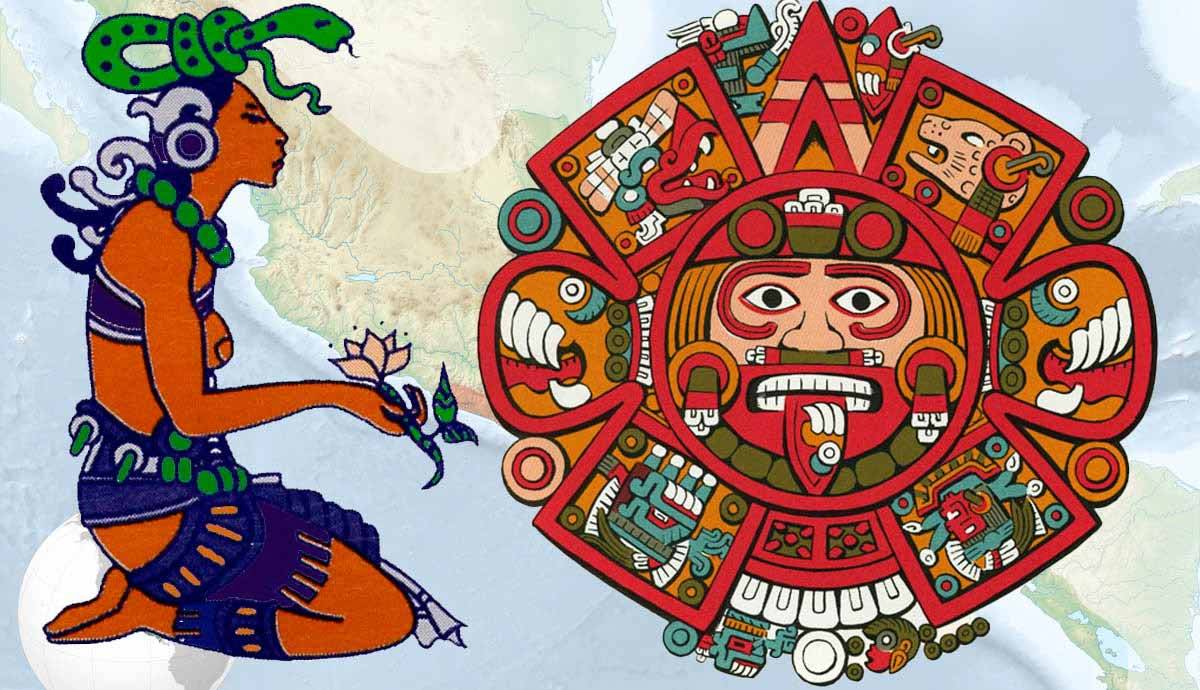 According to the research carried out over the years by multiple archaeologists and historians, upon the arrival of the Spaniards, there were more than 100 gods, at least for the Mayan and Aztec pantheons.

Similar to what happened with the gods of the Greek and Roman cultures, there is usually some confusion when it comes to pointing out several aspects of any Mesoamerican civilization, like the Aztec calendar, for instance, which is frequently associated with the Mayan people.

The same happens when the attempt is made to point out who is who among the Pre-Hispanic gods and to which culture they belong, since they usually have the same role despite having many names, and have the same supernatural abilities conferred by their respective followers.

To clarify this, we will analyze in this short article, the similarities between the most important gods and goddesses of the Mayan and Aztec cultures, to show how similar their religious ideologies were, and how they were depicted in diverse cultural expressions.

Birthplace and Area of Influence

The Mayans settled in southeastern Mexico, occupying the current states of Yucatan, Campeche, Quintana Roo, Chiapas, Tabasco, and the countries of Guatemala, Honduras, and El Salvador; while the Aztecs occupied the Mexican central highlands and part of the Gulf of Mexico, along with portions of Guatemala and Nicaragua.

It is heavily implied by many archaeologists and historians that around the fourteenth and fifteenth centuries, the Aztecs and the Mayans had a common ground near the state of Chiapas in Mexico, where a limited cultural exchange between both cultures took place.

By the time the Aztecs were in the zenith of their territorial expansion and greatest splendor during the fourteenth century, the Mayans were already in a cultural decline, reaching their peak about 400 years earlier, during the Mesoamerican period known as “The Classic Period” between 600 and 1000 A.D. By that time, only a few sustainable Mayan city-states remained.

We can begin our analysis with the most important deities shared by both cultures, we refer to Kukulkán – Quetzalcoatl because these two gods can be found embodied in many artistic expressions.

In the Mayan myths, it is said that Kukulkan helped lay the foundations of their culture with the creation of Chichen Itza, the very first important milestone in their history, as it was the most important capital of the region, flourishing around the years 800 – 1100 AD.

For the Aztecs, Quetzalcoatl occupied a primordial place within the Aztec pantheon, but it is said that this deity didn’t belong to them, as it has its possible origins within the Toltec culture, who settled north of the central highlands where the Aztecs thrived.

As with the Mayans, Quetzalcoatl was a very important foundation character since the legendary Topiltzin Quetzalcoatl was said to have been one of the founders of Tula – Teotihuacan, the famed city of the gods, a place where the universe was created according to Aztec myths.

We can appreciate then, that both deities are meant to portray Promethean guides who lent their help to human civilizations in different ways, allowing the Mayans and the Aztecs to develop as powerful civilizations during their respective times, and in exchange, the people began to worship these gods as a form of gratitude.

These deities are also heavyweights in the pantheon of traditional deities of pre-Columbian Mesoamerica since in both cultures, they were worshiped for their association with water and the rain cycle, vital for the continued success of their agricultural practices. Human sacrifices were constantly dedicated to both deities so that their worshipers could be blessed with the natural miracle of water pouring from the skies, to maintain an abundant population of faithful followers.

For the ancient Mayans, Chaac played the role of an agriculture and fertility god within their belief system, as he was able to control the rain and the storms. It was also believed that he had the power to command at will other destructive natural phenomena, like floods and hurricanes, a feat that commanded great respect.

Tlaloc, the Aztec equivalent of Chaac, also had a place of great regard among his people, as he was believed to be the ruler of the fourth heaven known as “Tlálocan”, which was thought to be the eternal destination of those who perished under any circumstances related to water, such as drowning, due to natural disasters.

This god also had access to a devastating array of powers and abilities, such as the ability to bring gentle rains to water the crops of his followers and at the same time unleash powerful storms that could destroy everything in its path, therefore his followers always sought to keep him content to appease his anger.

Although Tlaloc and Chaac were rain gods and were frequently represented with reptilian features, such as fangs and blinders or “goggles”, the physical representation varied in both cultures. For the Aztecs, he was depicted as a half jaguar, capable of generating thunder with his powerful roar, while for the Mayans, Chaac was presented in human form, and was able to produce powerful lighting while hitting the clouds with his ax.

For the next case, we have a deity that serves to represent two gods in one since both Itzanmá and Quetzalcoatl have different avocations or representations in the works of art in both cultures.

This situation is not something extraordinary or unusual within the religious imaginary of the ancient Mesoamericans, as it was common to find representations of deities who took one or more roles and were embodied in different characters depending on different needs and different facets of life, establishing them as omnipotent and perhaps omnipresent gods.

Among the Pre-Hispanic inhabitants of Mesoamerica, fertility and its artistic and ideological representations were closely related to the feminine side of humanity since women in both cultures played a fundamental role in the creation of the world and mankind.

In this case, we have two goddesses who represent fertility, Ixchel, and Coatlicue, who also were very important within the Mayan and Aztec pantheons. Coatlicue, which in Nahuatl means “the one with the snake skirt”, was considered among the Aztecs as the mother of all gods and humans and had the moniker of “Nuestra Madrecita”, which means “Our loved mother”.

The god of war Huitzilopochtli was said to have been born when his mother Coatlicue, became pregnant one day after keeping in her clothes a ball of feathers that she found while sweeping her courtyard. Her children, enraged with this unexpected situation, decided to kill their mother as punishment. However, Huitzilopochtli suddenly came out of his mother’s womb, wearing battle gear and a flame serpent that was used as a sword, and killed his siblings, creating in the process the moon and the stars.

For the Mayans, Ixchel was the primordial mother from whom all beings in the universe were born. She was represented (as was the case with Tlaloc) as a deity who could be, on one hand, a nurturing mother, and on the other, as a destroyer of worlds; therefore, she was often depicted as a young woman carrying a rabbit representing the crescent moon, but also as an old woman wearing a skirt with crossed bones and a snake on top of her head, sometimes confused with her head.

From these two descriptions, it can be concluded that both goddesses shared remarkable similarities regarding their role as symbols of life and fertility.

In each of the examples presented here, it is possible to appreciate the way people of ancient times saw the universe. And both civilizations sought to make sense of the world around them by creating beings that possessed extraordinary abilities that met their ideological and daily life needs.

By Jesus SantillanBA Anthropology w/ Archaeology ConcentrationJesus Santillan is a contributing writer and researcher with an emphasis on Mesoamerican civilizations. His studies include a Bachelor's in Anthropology with a focus on archaeology. In his free time he tutors students and writes independently. Jesus is from Zacatecas, and currently lives in San Luis Potosí, Mexico.

Aztec Calendar: It Is More Than What We Know