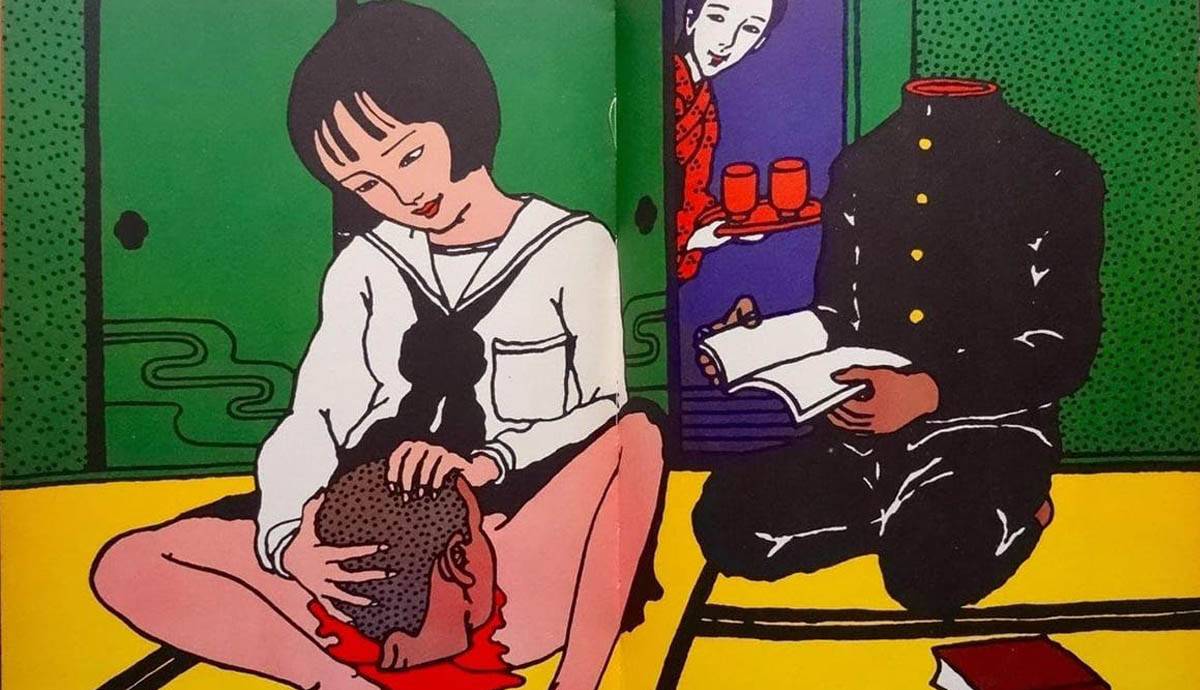 It was announced on Instagram on January 15, 2020 that the artist Toshio Saeki had passed away at the age of 74. Known as the Godfather of Japanese Erotica, the painter and illustrator was iconic in the post-war Japanese underground.

Influenced both by Eastern and Western traditions, Saeki has created an interesting and unique style of illustration that intrigues viewers while simultaneously making them uncomfortable.

Here, we’re exploring this prolific artist’s life and career in the wake of his passing.

Although much of Saeki’s childhood was kept under wraps, we know that he was born in 1945 in Japan’s Miyazaki prefecture and grew up in Osaka. As a young man, he loved the dramatic films of the samurai-period and was rather obsessed with Yakuza B-movies, both of which would become evident in his future work.

In an interview with Artsy back in 2017, Saeki talked about how he would draw the things that he saw in his dreams: supernatural beings mingling with the living, sexualized corpses, schoolgirls, and strange fantasies, also noting that he was deeply influenced by the French graphic artist Tomi Ungerer.

He moved to Tokyo in 1969 and would publish frequently in Japanese magazines and by 1970 he self-published his first book of 50 illustrations called Toshio SAEKI art book. The book was well-received by critics and he began to exhibit his work at galleries throughout Japan and Paris.

Saeki’s work is full of politically incorrect depictions of sexual relationships since, at the time, being politically correct wasn’t much of a thing. It’s certainly interesting to see how modern viewers react to the material now and talk about how these graphic images are perceived with today’s lens.

Tokyo was undergoing a sexual revolution in the 1970s so Saeki’s art captured the interest of the local art scene. Still, he was always considered the artist’s artist since his illustrations never made him a household name.

However, you might have seen his work without realizing it as one of his drawings graced the album cover for Some Time in New York City by John Lennon and Yoko Ono.

It was a conscious decision by Saeki to keep much of his personal life out of the limelight. In fact, he only ever left Japan once and felt that shying away from public life was tremendous for his art, allowing him to be “bolder, freer, and more daring.”

In general, Saeki saw himself first and foremost as an entertainer and used motifs that were deeply Japanese. For example, it was common in their culture to depict violence in a way that was funny and cringe-worthy at the same time.

In the 1980s, Saeki left Tokyo and set up his studio in a remote mountain village where he continued to work until the end of his life. It seemed that Tokyo had taken a toll on him as he could often be found drinking sake at one of the bars of the Golden Gai district until the wee hours in the morning while he lived there.

Still, it might surprise you based on his preferred subject matter that Saeki wasn’t a patron of Tokyo’s infamous sex clubs. He felt that he was able to draw better erotica if he had a bit of distance and could see them more objectively.

In addition to his solo exhibition in Paris in 1970, Saeki’s work has been presented all over the world, from Tel Aviv to London to San Francisco to Toronto. More recently, in 2016, his work was exhibited in Taipei and in 2017, at Art Basel in Hong Kong. So, it’s clear that, although you may have never heard of Saeki’s work, he had a growing audience until very late in his life.

Even today, his work is mostly hidden away in books and magazines. Much of his work isn’t even available in bootleg form on the internet. Perhaps it’s still a bit too shocking for our current climate.

Still, as we bid farewell to this eccentric artist who depicted his wildest dreams, now is the time to celebrate his work and think more deeply about his contributions to the world of art and illustration.

How do his images make you feel? Are they too lewd and disgraceful? Or are they interesting and worth exploration? We’ll let you take it from here.