8 million people visit the doctor every year because of a UTI. Fortunately, the infection is almost always cleared up with antibiotics. People in the past were not as lucky. 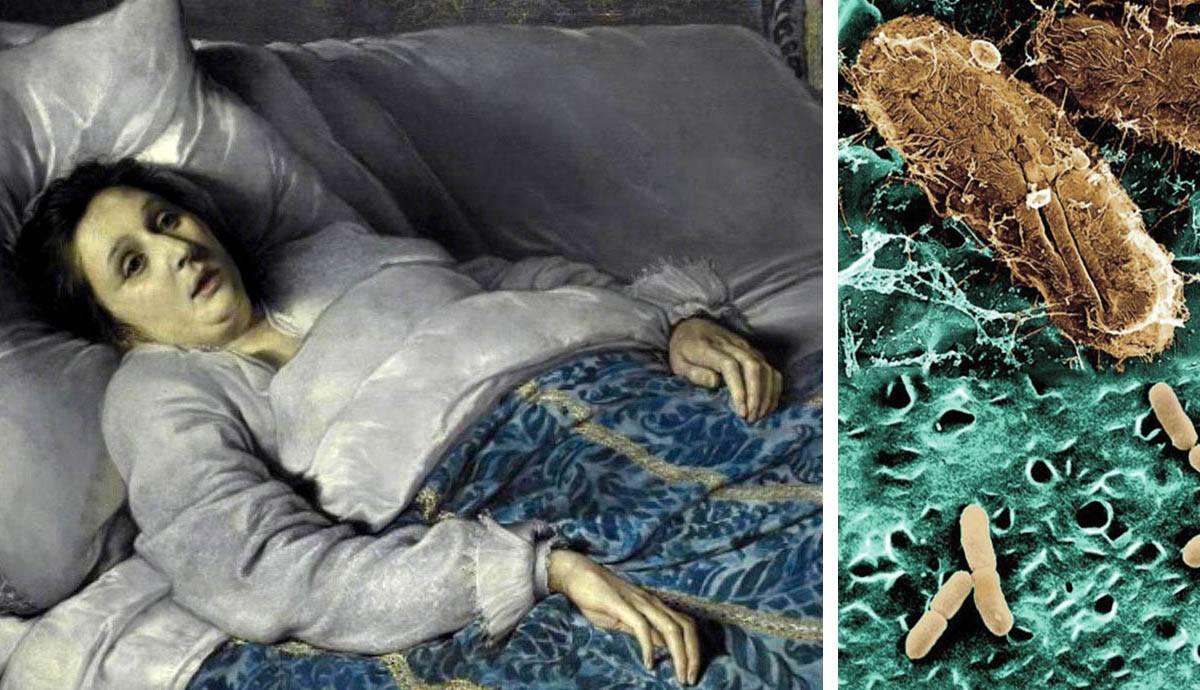 At least 50% of women and 12% of men will get a urinary tract infection, also known as a UTI, in their lifetime. To present a hypothetical case, it is 1852 and a young, married woman gets up to use the chamber pot and when she pees, it stings. The next day she keeps having the urge to urinate but very little or nothing comes out. When it does, the pain is worse than the day before.

Most Common Cause of a UTI: An Evil E. coli

Since germ theory did not exist until the second half of the 1800s, she is not thinking her problem is an invisible microbial form of life. The majority of UTIs are caused by a particular type of Escherichia coli, uropathogenic E. coli, that sprout a special hook from the end of its pili, a hair-like appendage. Viewed with an electron microscope, the pili gives the bacteria a slightly furry appearance. The hook, known as FimH, is specially adapted to attaching to the lining of the urethra, the bladder, and the kidneys. The bacteria, originally residing innocently in the bowels of the victim, find their way into the urinary tract and since women have shorter routes to the bladder than men, they get the infection more often.

As the microbial community grows, it may travel from the bladder into the kidneys and eventually infect the body’s whole system with sepsis. Kidney failure and death can result without the timely intervention of antibiotics. If the antibiotic response comes too late, then, even today, a UTI may lead to death as it did with Pope John Paul II and actress Tanya Roberts.

In 1852, miasma theory was the most popular explanation for how disease spread. As the basis for medical diagnosis, bad air was popular for thousands of years and with several cultures. Bad air would have been the least of the woman’s worries though. Since the sting was originating “down there,” it would not have been surprising if venereal disease entered her mind. Today, there is often confusion between certain sexually transmitted diseases (STDs) and UTIs, even among medical personnel. Several of the symptoms are the same though. In the 19th century and indeed throughout history and across cultures, the genital-urinary arena of women was rife with religious and societal taboos, laying a foundation for extensive misdiagnoses. Many women may not have sought medical care until infection reached advanced stages, and even then, our hypothetical woman may leave out certain crucial information that would lead to the conclusion of a bladder or kidney infection.

Perhaps the victim has several children. The more sexually active she is, the more likely she is to get a UTI. Sex act helps carry the bacteria up her urethra. Hopefully, she is not pregnant because maternal UTIs are linked to low infant birth weight, premature birth, or even fetus mortality. If at any time she had tried to prevent pregnancy, herbal spermicides passed down from the Middle Ages would have increased her risk of getting a UTI. Modern spermicides are a risk factor today.

Bathrooms in the 19th Century

She could not know that her likelihood of getting a UTI is exacerbated by the role women have in her society. In 1850, women’s public bathrooms did not exist, resulting in what is sometimes referred to as a “urinary leash”. Not unlike the women in ancient Athens, respectable women before the Edwardian era usually did not frequent public places. If she needed to leave the home, she either held it, drank little, or made sure she did not travel far, probably all three. Drinking water regularly significantly decreases the chance of a UTI from recurring.

A Medical Book for Women

If she is literate and well-read, she might have a recourse to The Female’s Medical Guide and Married Woman’s Advisor, published in 1849, which mentions a common disease called “The Whites”. The symptoms include “smarting when making water,” lower back pain, loss of appetite, pale complexion, and low spirits, but only in connection with a white vaginal discharge. It is not unlikely that she has the discharge, too, although it may be unrelated to the UTI. Leukorrhea is quite common among women and is often benign.

Maybe the pain goes away and never comes back. The immune system may take care of it. However, the infection has at least a 50% chance of not resolving on its own, in which case, she may begin to feel worse. The urine turns frothy and cloudy. She loses her appetite. During the night, she wakes up vomiting, and then one morning after providing breakfast for her family, she collapses. Even if she had confessed to the doctor and even if the doctor rules out venereal disease, there was very little effective care he could give her.  He may be able to help ease some of her symptoms, or he may make it worse.

The Female Medical Guide suggested several remedies including a concoction of white oak bark and sumac berries injected into the vagina twice a day. Both oak and sumac berries are being scrutinized for their beneficial properties. Oak bark has antibacterial and anti-inflammatory properties and has been used medicinally across many cultures all over the world. Research is ongoing into oak’s properties as a pharmacological source but it is currently deemed unsafe to use in relation to the kidneys.

For most of history, the problem was nobody knew that bacteria existed. Once the microbes were discovered by Leeuwenhoek in 1667, it took another 210 years to determine that it caused disease. Another twenty years passed before products were tested for elimination of the bacteria specific to uropathogenic E. coli. Finally, in 1937 sulfanilamide appeared on the scene and effectively ended the infection in individuals once the person arrived in the doctor’s office. It has been a long road battling this particular pathogen and it is not over yet. Antibiotic-resistant uropathogenic E. coli now exists. History and geography detail the danger of a scenario of a world without effective antibiotics. In 2017, death by sepsis was responsible for 20% of deaths worldwide, the heaviest percentage in sub-Saharan Africa, India, and eastern and southern Asia, places with the least access to antibiotics.

UTI Back in Time

A 2005 paper mapped the history of the disease. It notes that medicine in the Middle Ages in Europe was based on practices originally stemming from the Middle East, the Roman Empire, and Greece. The polymath Avicenna (980-1037) and Galen of Pergamon (131-200 CE) were valuable contributors.

Avicenna (980-1037) wrote the Canon Medicae which recommended fenugreek seeds and theriac compresses. Fenugreek seeds are native to the Middle East and are currently being studied for its hypoglycemic effect with the hopes of improving diabetic care, both Type 1 and Type 2. Since diabetes is a risk factor in UTIs, improving the function of insulin release would potentially limit the ability to acquire the urinary tract infection in the first place. Theriac is a concoction that includes viper and/or scorpion among other unsavory ingredients. Initially used by the Greeks for animal bites, it eventually became a panacea for most ailments, including those of the kidneys.

Galen, physician to Marcus Aurelius, was at the forefront of Roman medicine. He, in turn, was influenced by the Greek, Hippocrates (460-370 BCE). They recommended baths, diuretics, and if the disease progressed, catheterization. Catheters were a particularly bad idea. They might have provided immediate relief but even today, with vastly improved hygiene, catheters are a significant source of urinary tract infection. As a last recourse, Hippocrates, who usually shunned surgery, suggested making an incision in the kidney to drain pus. If the infection was in both kidneys, death was to be expected.

China’s long history of medical treatises often mentions UTI-like symptoms, although women’s symptoms were not considered until the 600s CE. Labeled as lin or long, urinary tract issues gave birth to many diverse recipes over the millennia, but mallow seems to be a ubiquitous ingredient in many of them. A phytochemical analysis of mallow shows that there are a whole host of compounds in the plant that have the potential to encourage healing processes. Like many ethnobotanical studies, research is just beginning in the efficacy and safety of its use.

Three considerations may skew the statistics towards more serious UTIs now than in the past. First, antibacterial resistant uropathogenic E. coli would not have existed before the advent of antibiotics. If among the bacteria eliminated, there is a fractional number that has a gene that can evade the antibiotic, then the bacteria will proliferate. This is happening. Second, people are living longer, and age is a risk factor; therefore, there is a higher percentage of people who are at risk of getting a UTI. Lastly, although this finding would not affect the first UTI, the most current research shows that the use of antibiotics changes the microbiota of the urinary tract. This may lead to less resistance to pathogenic bacteria.

Nevertheless, uropathogenic E. coli is an ancient organism. Symptoms mirroring urinary tract infections have been documented for 4,000 years. Even more compelling is the finding that uropathogenic E. coli diverged from its non-pathogenic cousins in the gastrointestinal tract from 107,000 to 320,000 years ago. Urinary tract infections have plagued humanity much, much longer than there have been medical treatises to record them. Beneath the veil of misdiagnoses, misogyny, and palliative medical care, UTIs have been killing people for a long time.