HomeAnswersWhat Are the 10 Wonders of Yellowstone National Park?

What Are the 10 Wonders of Yellowstone National Park? 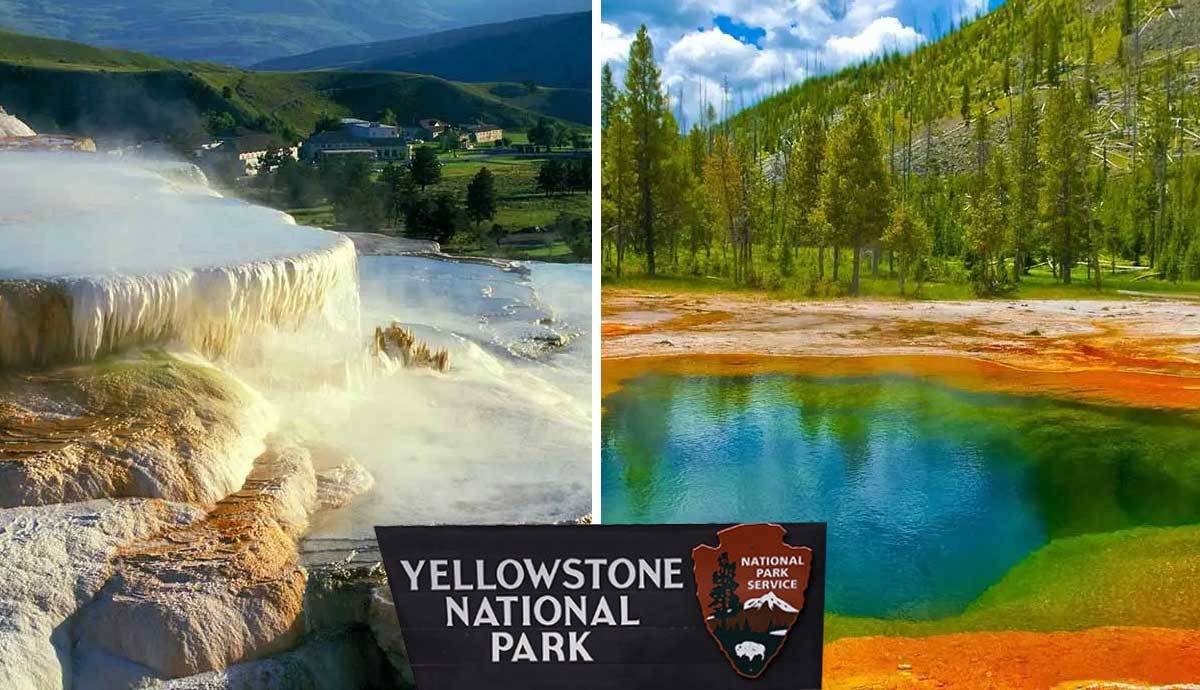 Yellowstone National Park in Wyoming, Idaho and Montana is the oldest National Park in the entire world, giving it a special significance in geological history. It was also one of the first World Heritage sites in the United States, and became a UNESCO World Heritage site in 1978. Many of its most celebrated natural wonders have been there untouched for hundreds of years, making them all the more fascinating and in need of care, preservation and respect. We look through the 10 greatest wonders of Yellowstone National Park that attract millions of tourists from far and wide every year.

One of Yellowstone’s star attractions is the Mammoth Hot Springs, a series of naturally occurring hot springs that cascade over a series of complex, distinctive stepped terraces. As tempting as it might be, it is forbidden to take a dip in the hot acidic water, for your own safety and the preservation of the precarious rock surfaces. Thermophiles (heat-loving bacteria) and algae cause rainbow colors to emerge in the area, including intense yellows, greens and blues.

Tower Fall is the treacherous 132 feet high waterfall famously captured by photographer William Henry Jackson and artist Thomas Moran in 1871. It was thanks to their photography that the Yellowstone area became a National Park in 1872. Surrounding this gushing waterfall are a series of fantastical pointed rocks once created by lava flow as it spliced through the rocks and boulders of Yellowstone country.

The incredible Yellowstone Grand Canyon is a 24 mile long and 1,200 feet deep valley carved out by the sheer force of the Yellowstone River. It contains two of the National Park’s major waterfalls – the smaller Upper Falls, and the larger Lower Falls, both of which can be seen from viewing platforms on the North and South Rims. At an incredible 160,000 years old, the canyon is one of the oldest natural phenomena in the world, made from a gradually eroding rhyolite volcanic rock that continues to give way over time.

Known as the ‘Serengeti of America’, Yellowstone’s Lamar Valley is one of North America’s most impressive wildlife hotspots. Wild animals roam freely here, including grey wolves, bison, grizzly bears, deer, ospreys, coyotes, bald eagles and many more. Animals are most active here at dawn and dusk, making these the ideal times of day for a visit.

Mount Washburn is Yellowstone’s most iconic hike, offering expansive views across this natural wonderland. It is a 6-mile round trip along the wide trail up the mountain and back again, making this a popular day visit for intrepid explorers. In the winter months heavy snow lies on the mountains, while in spring and summer a sea of spectacular wildflowers fills the trail with vivid color.

Midway Geyser Basin is a hot water spring colored with bands of orange, yellow and green rings of heat-loving thermophilic bacteria. The spring might be smaller than some of Yellowstone’s other star attractions but don’t be fooled; it is deeper than a 10-storey building, containing devilishly hot water that has travelled 121 feet from a crack in the earth up to the surface of the spring.

Old Faithful is Yellowstone’s famous geyser, first discovered in 1870 by the Washburn Expedition, and later photographed by Ansel Adams. Situated in Yellowstone’s Upper Geyser Basin, this temperamental geyser has a habit of erupting at unpredictable times, sometimes up to 180 feet into the air, and around 20 times in a single day.

Yellowstone’s Petrified Forests offer fascinating insight into the site’s former volcanic past. The giant redwoods and pine trees along this track were once buried under layers of ash and volcanic rock when violent volcanic activity wiped out the once lush vegetation. Slowly the ash and rock that once hid these trees for many centuries has eroded away, uncovering their natural wonder.

Mud Volcano is a swirling pit of hot mud that bubbles away like a witch’s cauldron. One of Yellowstone’s major geysers, this hot pool of acidic liquid is heated by steam escaping from far below it, pointing to Yellowstone’s prehistoric past as a volcanic site.

Last but not least, Yellowstone Lake is the National Park’s largest body of water, at 32 km long, and 23 km wide. Under its surface, scientists have found a hotbed of frenetic activity, including canyons, geysers, hot springs, and a large population of cutthroat trout that attracts anglers and fishermen. The lake also attracts aquatic birds, including several duck species, sandhill cranes, Canada geese, American white pelicans, common loons and trumpeter swans.

Where Is Yellowstone National Park?

Where Is Yellowstone National Park?

What Is So Special About Yosemite National Park?