HomeAnswersWhat Are the Theodosian Walls (of Constantinople)?

What Are the Theodosian Walls (of Constantinople)? 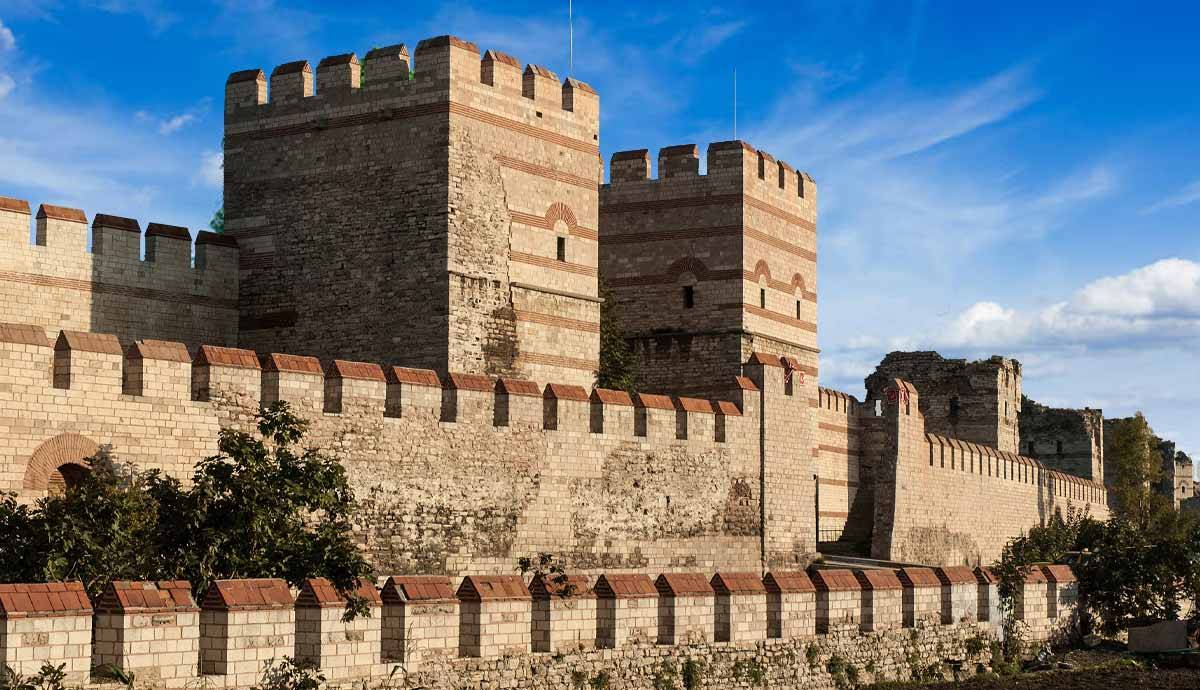 The Theodosian Walls of Constantinople are one of the most imposing defensive structures of the ancient and medieval world. Since their construction in the early fifth century AD, during the reign of emperor Theodosius II (thus the name), the Theodosian Walls protected the city of Constantinople, the capital of the Eastern Roman Empire, better known as the Byzantine Empire.

For centuries, this imposing structure posed an unsurmountable obstacle to waves of invaders who tried to conquer the city and, by extension, the Empire. Finally, in 1453, more than a thousand years after their construction, the Theodosian Walls fell to the fire of Ottoman cannons. However, the Walls outlived both the Roman and the Ottoman Empires and still stand in the heart of modern-day Istanbul.

The Construction of the Theodosian Walls

The Theodosian Walls are not the first defensive walls of Constantinople. Following the foundation and the subsequent dedication of Constantinople on 11 May 330, Emperor Constantine the Great protected his city with the new wall. However, the collapse of the Danubian frontier following the Battle of Adrianople in 378 required more formidable defenses to protect the capital of the Eastern Roman Empire.

Finally, in the early fifth century, emperor Theodosius II commissioned the new walls, known as the Theodosian Walls. The new defensive perimeter was completed in the nick of time, preventing Attila the Hun and his army from taking the city. Attila’s Huns were only the first of many invaders whose dreams of the conquest of Constantinople were halted by the imposing Theodosian Walls.

The Theodosian Walls as an Impregnable Bastion

The Theodosian Walls, when finally completed, measured around 12 km in length, defending the approaches to Constantinople by land. The walls consisted of three lines of defense. The would-be conqueror had first to cross the wide moat (filled with water), protected by the low wall, 1.5 meters tall. Next, the invader would have to cross the open ground before reaching the outer wall, 8-9 meters in height.

Then, if the invader were lucky enough, he would have to cross another open space, finally reaching the lynchpin of the city’s defense, the massive inner wall, 12 meters high and almost 5 meters thick. Both walls were intersected with towers, which held the artillery engines. Such a system provided the defender with an ideal killing field. No wonder for a thousand years, no invader managed to take the city.

The Walls Were Also a Symbol of Power

Besides their defensive purpose, the Theodosian Walls presented a powerful and striking symbol of the Empire’s power to anyone who approached Constantinople by land. Imagine the weary traveler who, after days, weeks, or even months, reached the imperial capital. In most cases, the he would enter the city through the imposing Porta Aurea or Golden Gates, built initially as the triumphal arch of emperor Theodosius I in 391.

This was the route the Byzantine emperors took when leaving for the campaign or returning to the city in triumph. It was also the starting point for the Mese, the main avenue that would take the traveler past several fora and triumphal arches all the way to the heart of Constantinople: the grand cathedral of Hagia Sophia, the Hippodrome, and the Great Palace. Besides the monumental Golden Gates, nine more gates pierced both the outer and inner walls, used by civilians and the military.

All the Walls of Constantinople

The Theodosian Walls were the most important defense of Constantinople. As such, the land walls were constantly maintained, upgraded and extended. The most significant extension happened in the eleventh century, during the reign of the Komnenian emperors, who built a whole new section of the wall to protect the Blachernae Palace near the Golden Horn.

Besides the land walls, the Sea Walls protected Constantinople from naval attack and offered additional protection to the ships in the city’s principal harbor’s on the Sea of Marmara. Lastly, the Anastasian Wall, also known as the Long Wall of Thrace, located around 60 km from the city, enclosed the peninsula, providing the first line of defense. However, the fortification’s length of 56 kilometers made it difficult to man, significantly limiting its effectiveness.

Sieges Prevented by Theodosian Walls and One That Was Not

From its construction in the fifth century, the Theodosian Walls prevented numerous invaders from taking the city of Constantine. The most critical sieges were those by the Persians and Avars in 626, by Arabs in 674 and in 717-718. Slavs and Rus also failed to overcome the formidable obstacle. In all the cases, the Theodosian Walls halted the enemy’s progress by land, while the imperial navy (the so-called “wooden walls”) destroyed the hostile fleet. Besides the invading armies, numerous earthquakes heavily damaged Theodosian Walls.

However, due to their crucial importance, the walls were quickly repaired. Even the armies of the Fourth Crusade failed to take the Theodosian Walls. On that occasion, the enemy took the city by taking the Sea Walls. The Theodosian Walls stood impregnable for nearly a millennium until the advent of a new age of warfare finally cracked this unsurmountable obstacle. On 29th May 1453, the largest cannon ever made broke the weakest point on the ancient walls, allowing the Ottoman army of Mehmed II to take Constantinople.

Yet, more than half a century later, the Theodosian Walls still stand, a striking reminder of the power and glory of the vanished empire.

Arch of Constantine: The Monument With Many Faces

The Hippodrome of Constantinople: 10 Most Unusual Antiquities