HomeAnswersWhat Happened at the Battle of Adrianople (378 AD)?

What Happened at the Battle of Adrianople (378 AD)? 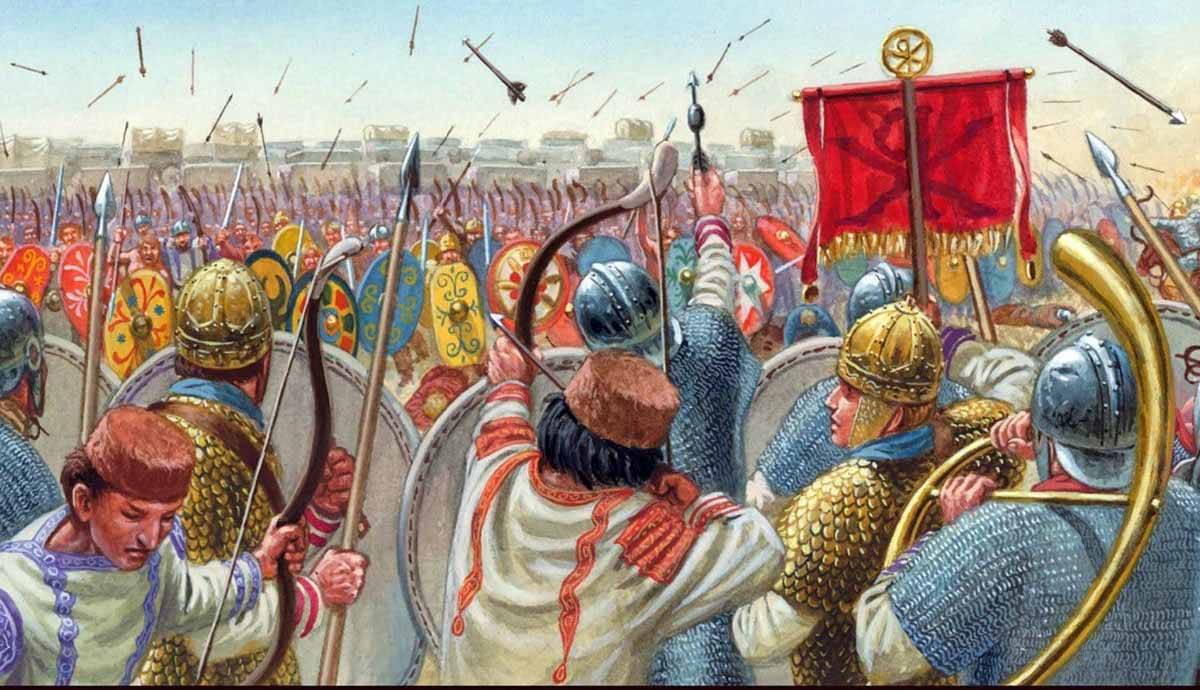 The Battle of Adrianople (378 AD) is considered one of the worst military defeats in all of Roman history. In fact, the late Roman historian Ammianus Marcellinus compared it with the catastrophe at Cannae (216 BC), where the Carthaginian general Hannibal Barca annihilated around 50 000 legionaries. At Adrianople, the joint Gothic forces decisively defeated the Eastern Roman army led by emperor Valens. About 20,000 soldiers perished that day, along with most high-ranking officers. To make matters worse, Emperor Valens himself was killed in the battle, leaving the throne in Constantinople vacant. Following their triumph, the Goths invaded the Balkans.

It took years until emperor Theodosius stabilized the control, allowing the barbarians to settle under favorable terms. However, despite the heavy losses, the Battle of Adrianople did not lead to the collapse of the Roman Empire. The Eastern, and not the Western Roman army, suffered the blow. Yet, the Empire survived in the East, outlasting the “fall of Rome” for more than a thousand years.

Why did the Battle of Adrianople Happen?

The tragic death of emperor Julian in Persia in 363 AD left the Roman Empire in disarray. The humiliated and demoralized Roman army was in dire need of a leader. To make matters worse, Julian’s successor – emperor Jovian – died on the way back to Constantinople (What was Constantinople). However, the Romans avoided the peril of civil war by electing two brothers – Valentinian and Valens – who divided the Empire between themselves. The reign of Valentinian I brought peace and prosperity to the Roman West.

However, his less competent brother Valens nearly lost the throne at the start of his reign. Furthermore, the Persian threat loomed on the horizon. Thus, when in 367, the Gothic tribes asked the Roman authorities for permission to cross the Danube as they fled from the Huns, Valens was happy to agree. The warlike Goths were an ideal choice to fill the depleted ranks, man the frontier defenses, and strengthen the Eastern Roman Empire.

Emperor Valens’ plan was sound. However, fearing the Huns, the Goths crossed the Danube quickly and in large numbers. The massive influx of barbarians combined with the corruption of the local authorities resulted in friction between the two sides. After being repeatedly mistreated and humiliated, the Goths went to war with the Romans. For two years, the barbarians ravaged Thrace.

Instead of focusing on Roman Empire’s main rival – Sassanid Persia – Valens now had a new headache to deal with. By 378 AD, it became clear that the only way to eliminate the barbarians was a direct strike. Hearing that the Goths had camped in the vicinity of Adrianople (modern Edirne, in Turkey), emperor Valens transferred all the forces from the Eastern frontier and took personal command of the army.

Emperor’s Pride Led the Romans to the Defeat

Unlike his brother Valentinian I, who led several successful campaigns against the barbarians in the West, Valens had no victory to speak of. In fact, he barely survived a challenge to the throne early in his reign. To make matters worse, Valentinian’s son and successor, emperor Gratian, was also a successful military commander. Thus, when Gratian halted his troops to deal with a barbarian attack in the Rhine, his uncle decided not to wait for the reinforcements. Confident of an easy victory, Valens was eager to reap the glory himself.

After all, his reconnaissance notified him of a smaller force (around 10,000) led by Fritigern, the leader of the Thervingi. Unfortunately, Valens’ scouts had failed to spot the barbarian cavalry led by the Greuthungi chieftains – Alatheus and Saphrax – who were away on the raid. Thus, the emperor dismissed Fritigern’s offer for peace and prepared for battle.

Valens’ Army was Unprepared for the Battle

In the early afternoon of August 9th, the Roman army came within sight of the Gothic camp, a circle of wagons protected by the ditch and the palisade. Outnumbered and fearing defeat, Fritigern once again called for a parlay. This time Valens accepted the offer. His men were tired and thirsty from marching under the hot summer sun and were out of battle formation. As negotiations were starting, two Roman cavalry units, without orders, launched an attack, but the Goths chased them away. Having no other choice than to fight, emperor Valens ordered a general attack, even though his infantry was not fully prepared. In fact, the rear column was still arriving at the field when fighting broke out.

Despite all the difficulties, initially, the Romans had been successful. Having an advantage in numbers, well-disciplined Roman infantry pushed the Goths back to the wagon circle. However, the Gothic cavalry suddenly appeared, accompanied by Hunnic and Alan horsemen. Seizing the opportunity, they descended upon the Romans. The enemy charged the Roman right flank, routing their cavalry, which left the infantry exposed to the attack from the rear. At the same time, Fritigern’s warriors emerged behind the wagons to strike the legionaries from the front. Surrounded and unable to break out, tightly packed Roman soldiers were slaughtered by the tens of thousands. The survivors who managed to break the ranks, fled only to be cut down by the Goths.

For Ammianus Marcellinus, the defeat of Adrianople was the second worst disaster after the Battle of Cannae. Around 20,000 Romans, two-thirds of the eastern field army, laid dead on the battlefield. To make matters worse, most of the high command had been slain, including emperor Valens, lost in the fighting. His body was never found. Encouraged by their victory and facing little opposition, Goths ravaged the Balkans for several years until the new eastern emperor, Theodosius I, made a peace settlement. This allowed the barbarians to settle on Roman soil, but as unified people. Theodosius’ decision would have a fateful consequence for the late Roman Empire and play a role in the emergence of the barbarian kingdoms following the Fall of the Roman West.

However, we should not forget that it was the eastern Roman army that was annihilated at Adrianople. And the Eastern Roman Empire, also known as Byzantine Empire (what is Byzantine Empire), outlived the “Fall of Rome” for over a thousand years. Thus, the Battle of Adrianople was not the end of the Roman Empire. It was a temporary but bloody setback, which exposed the serious, longstanding problems that, combined with the costly civil wars, led to the weakening and collapse of the Roman West.

Theodosius The Great: Saint or Sinner? 8 Key Events in His Life

Theodosius The Great: Saint or Sinner? 8 Key Events in His Life