HomeStoriesWhat was the Great Trek?

What was the Great Trek?

The Great Trek was a perilous exodus of pioneers into the heart of South Africa, looking for a place to call home. 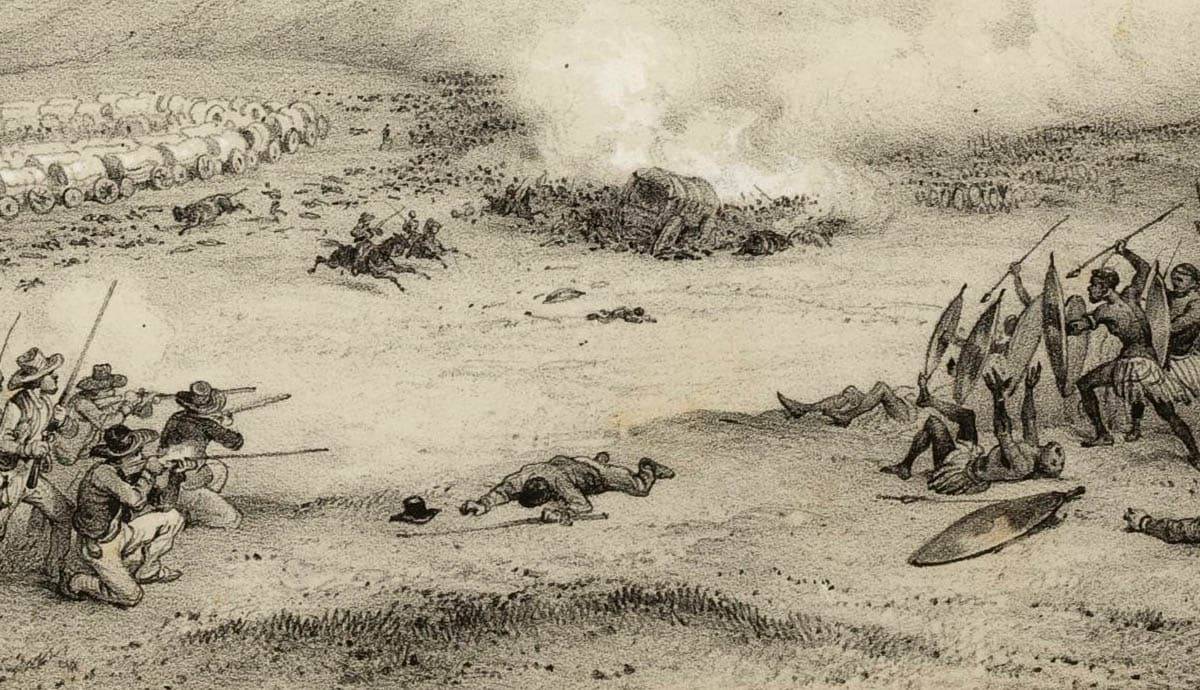 When the British took control of Cape Town and the Cape Colony in the early 1800s, tensions grew between the new colonizers of British stock, and the old colonizers, the Boers, descendants of the original Dutch settlers. From 1835, the Boers would lead numerous expeditions out of the Cape Colony, traversing towards the interior of South Africa. Escaping British rule would come with a host of deadly challenges, and the Boers, seeking their own lands, would find themselves in direct conflict with the people who resided in the interior, most notably the Ndebele and the Zulu.

The “Great Trek” is a story of resentment, displacement, murder, war, and hope, and it forms one of the bloodiest chapters of South Africa’s notoriously violent history.

Origins of the Great Trek

The Cape was first colonized by the Dutch, when they landed there in 1652, and Cape Town quickly grew into a vital refueling station between Europe and the East Indies. The colony prospered and grew, with Dutch settlers taking up both urban and rural posts. In 1795, Britain invaded and took control of the Cape Colony, as it was Dutch possession, and Holland was under the control of the French Revolutionary government. After the war, the colony was handed back to Holland (the Batavian Republic) which in 1806, fell under French rule again. The British responded by annexing the Cape completely.

Under British rule, the colony underwent major administrative changes. The language of administration became English, and liberal changes were made which designated non-white servants as citizens. Britain, at the time, was adamantly anti-slavery, and was enacting laws to end it.

Tensions grew between the British and the Boers (farmers). In 1815, a Boer was arrested for assaulting one of his servants. Many other Boers rose up in rebellion in solidarity, culminating in five being hanged for insurrection. In 1834, legislation passed that all slaves were to be freed. The vast majority of Boer farmers owned slaves, and although they were offered compensation, travel to Britain was required to receive it which was impossible for many. Eventually, the Boers had had enough of British rule and decided to leave the Cape Colony in search of self-governance and new lands to farm. The Great Trek was about to begin.

Not all Afrikaners endorsed the Great Trek. In fact, only a fifth of the Cape’s Dutch-speaking people decided to take part. Most of the urbanized Dutch were actually content with British rule. Nevertheless, many Boers decided to leave. Thousands of Boers loaded up their wagons and proceeded to venture into the interior and towards peril.

The first wave of voortrekkers (pioneers) met with disaster. After setting out in September 1835, they crossed the Vaal River in January, 1836, and decided to split up, following differences between their leaders. Hans van Rensburg led a party of 49 settlers who trekked north into what is now Mozambique. His party was slain by an impi (force of warriors) of Soshangane. For van Rensburg and his party, the Great Trek was over. Only two children survived who were saved by a Zulu warrior. The other party of settlers, led by Louis Tregardt, settled near Delagoa Bay in southern Mozambique, where most of them perished from fever.

A third group led by Hendrik Potgieter, consisting of about 200 people, also ran into serious trouble. In August 1836, a Matabele patrol attacked Potgieter’s group, killing six men, two women, and six children. King Mzilikazi of the Matabele in what is now Zimbabwe decided to attack the Voortrekkers again, this time sending out an impi of 5,000 men. Local bushmen warned the Voortrekkers of the impi, and Potgieter had two days to prepare. He decided to prepare for battle, although doing so would leave all the Voortrekker’s cattle vulnerable.

The Voortrekkers arranged the wagons into a laager (defensive circle) and placed thorn branches underneath the wagons and in the gaps. Another defensive square of four wagons was placed inside the laager and covered with animal skins. Here, the women and children would be safe from spears thrown into the camp. The defenders numbered just 33 men and seven boys, each armed with two muzzle-loader rifles. They were outnumbered 150 to one.

As the battle commenced, the Voortrekkers rode out on horseback to harry the impi. This proved largely ineffective, and they withdrew to the laager. The attack on the laager only lasted for about half an hour, in which time, two Voortrekkers lost their lives, and about 400 Matabele warriors were killed or wounded. The Matabele were far more interested in taking the cattle and eventually made off with 50,000 sheep and goats and 5,000 cattle. Despite surviving through the day, the Battle of Vegkop was not a happy victory for the Voortrekkers. Three months later, with the help of the Tswana people, a Voortrekker-led raid managed to take back 6,500 cattle, which included some of the cattle plundered at Vegkop.

The following months saw revenge attacks led by the Voortrekkers. About 15 Matabele settlements were destroyed, and 1,000 warriors lost their lives. The Matabele abandoned the region. The Great Trek would continue with several other parties pioneering the way into the South African hinterland.

The Battle of Blood River

In February 1838, the Voortrekkers led by Piet Retief met with absolute disaster. Retief and his delegation were invited to the Zulu King Dingane’s kraal (village) to negotiate a land treaty; however, Dingane betrayed the Voortrekkers. He had them all taken out to a hill outside the village and clubbed to death. Piet Retief was killed last so that he could watch his delegation being killed. In total, about 100 were murdered, and their bodies were left for the vultures and other scavengers.

Following this betrayal, King Dingane directed further attacks on unsuspecting Voortrekker settlements. This included the Weenen Massacre, in which 534 men, women, and children were slaughtered. This number includes KhoiKhoi and Basuto tribe members who accompanied them. Against a hostile Zulu nation, the Great Trek was doomed to fail.

The Voortrekkers decided to lead a punitive expedition, and under the guidance of Andries Pretorius, 464 men, along with 200 servants and two small cannons, prepared to engage the Zulu. After several weeks of trekking, Pretorius set up his laager along the Ncome River, purposefully avoiding geographic traps that would have led to a disaster in battle. His site offered protection on two sides by the Ncome River to the rear and a deep ditch on the left flank. The approach was treeless and offered no protection from any advancing attackers. On the morning of December 16, the Voortrekkers were greeted by the sight of six regiments of Zulu impis, numbering approximately 20,000 men.

For two hours, the Zulus attacked the laager in four waves, and each time they were repulsed with great casualties. The Voortrekkers used grapeshot in their muskets and their two cannons in order to maximize damage to the Zulus. After two hours, Pretorius ordered his men to ride out and attempt to break up the Zulu formations. The Zulus held for a while, but high casualties eventually forced them to scatter. With their army breaking, the Voortrekkers chased down and killed the fleeing Zulus for three hours. By the end of the battle, 3,000 Zulu lay dead (although historians dispute this number). By contrast, the Voortrekkers suffered only three injuries, including Andries Pretorius taking an assegai (Zulu spear) to the hand.

December 16 has been observed as a public holiday in the Boer Republics and South Africa ever since. It was known as The Day of the Covenant, The Day of the Vow, or Dingane’s Day. In 1995, after the fall of apartheid, the day was rebranded as “Day of Reconciliation.” Today the site on the west side of the Ncome River is home to the Blood River Monument and Museum Complex, while on the east side of the river stands the Ncome River Monument and Museum Complex dedicated to the Zulu people. The former has gone through many variations, with the latest version of the monument being 64 wagons cast in bronze. When it was unveiled in 1998, The then Minister of Home Affairs and Zulu tribal leader, Mangosuthu Buthelezi, apologized on behalf of the Zulu people for the murder of Piet Retief and his party during the Great Trek, while he also stressed the suffering of Zulus during apartheid.

The Zulu defeat added to further divisions in the Zulu Kingdom, which was plunged into a civil war between Dingane and his brother Mpande. Mpande, supported by the Voortrekkers, won the civil war in January 1840. This led to a significant decrease in threats to the Voortrekkers. Andries Pretorius and his Voortrekkers were able to recover Piet Retief’s body, along with his retinue, and give them burials. On Retief’s body was found the original treaty offering the trekkers land, and Pretorius was able to successfully negotiate with the Zulu over the establishment of a territory for the Voortrekkers. The Republic of Natalia was established in 1839, south of the Zulu Kingdom. However, the new republic was short-lived and was annexed by the British in 1843.

Nevertheless, the Great Trek could continue, and thus the waves of Voortrekkers continued. In the 1850s, two substantial Boer republics were established: The Republic of the Transvaal and the Republic of the Orange Free State. These republics would later come into conflict with the expanding British Empire.

The Great Trek as a Cultural Symbol

In the 1940s, Afrikaner nationalists used the Great Trek as a symbol to unite the Afrikaans people and promote cultural unity among them. This move was primarily responsible for the National Party winning the 1948 election and, later on, imposing apartheid on the country.

South Africa is a highly diverse country, and while the Great Trek remains a symbol of Afrikaner culture and history, it is also seen as an important part of South African history with lessons to learn from for all South Africans.

Mandela & the 1995 Rugby World Cup: A Match that Redefined a Nation