HomeAnswersWhen Was the Fall of Ancient Rome? 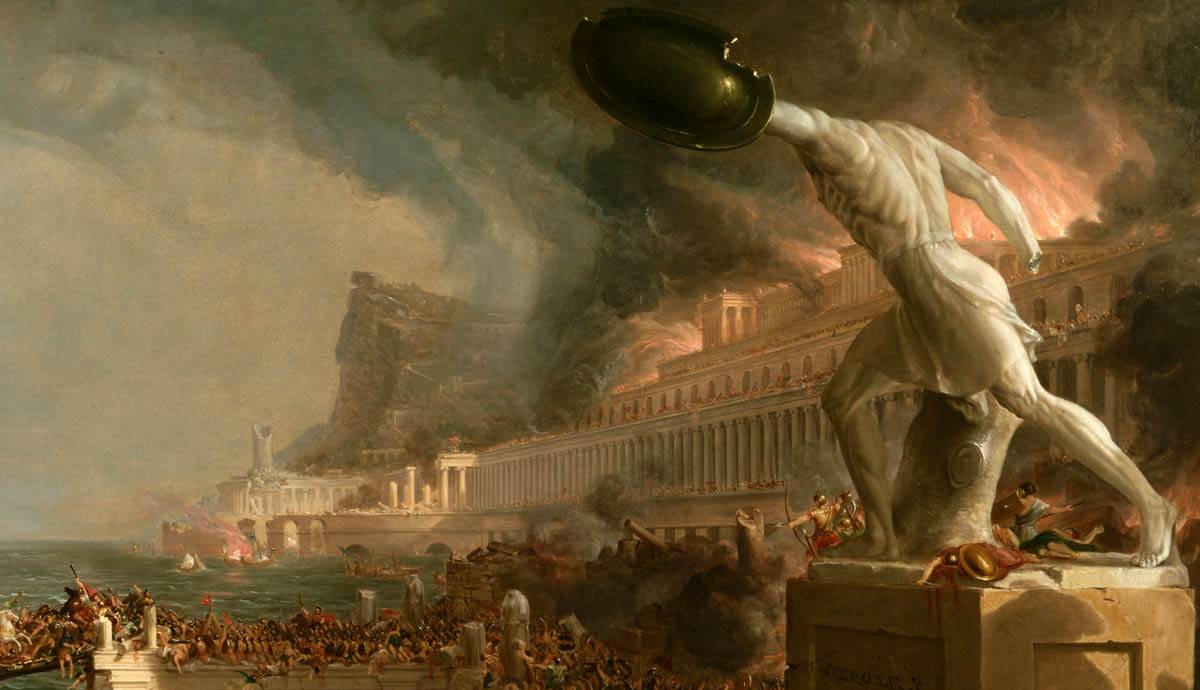 The end of ancient Rome was an earth-shattering and momentous period in time that changed the course of history. Many historians believe Rome’s downfall led to the ‘dark ages’ that followed, and a decline in education, literacy, economics and law that would take centuries to recover from. It wasn’t until the Renaissance in the 14th century that the wonders of Roman culture began to re-emerge. The phrase ‘the fall of Rome’ is a popular one that gets thrown around a lot, but when did this supposed ‘fall’ actually happen? Or did it even happen at all? Let’s take a closer look at the facts to find out more.

476 CE is most commonly cited as the date when ancient Rome ‘fell.’ Historians have chosen this date because this is when the western faction of the Roman Empire was destroyed, thus ending its reign over the world. It was on this date that the fearless Germanic barbarian Odoacer, terrifying leader of the almighty Torcilingi clan, overthrew the child Emperor Romulus Augustulus, thus ending the western Roman Empire and the reign of ancient Rome. From this date onwards, Odoacer became king of Italy, forcing poor Romulus to give up his crown and retreat into hiding. After an incredible 1000 years of world dominance, no Roman Emperor would ever rule from Italy ever again.

In Reality, the Fall of Rome Happened Very Gradually Over Hundreds of Years

Although the dastardly Odoacer is credited with bringing about Rome’s downfall, in reality, the history is far more complex and nuanced. Rome wasn’t built in a day, and neither was it destroyed by a single incident or individual. In fact, many argue the downfall of the Roman Empire had been gradually happening for hundreds of years, and Odoacer’s move was simply the straw that broke the camel’s back. In as early as the third century, the Roman Empire had become too large to manage as a single state, so something had to be done. Emperor Diocletian divided Rome into Eastern and Western Empires in 285 AD. Each side had their own political and ideological belief systems that were wildly divergent from one another. Over time, the Western Empire weakened, while the Eastern side grew stronger. So, some might say this schism in the third century is when the true downfall of Rome, the city, began.

Roman Emperor Constantine I made a bold move in 313 AD, shifting the Roman Empire’s Imperial centre from the city of Rome to the newly founded city of Constantinople. Some say this move from west to east led to the eventual decline of the western Roman Empire. Others argue that Constantine I did in fact save the entire Roman Empire by making this move, taking it away from the constant invasions and economic disasters it was facing at home and allowing for a fresh new start. Either way, in its new home at Constantinople, the Roman Empire, which later became known as the Byzantine Empire, thrived for many more years to come (even if the city of Rome was no longer its centre).

Did Rome Ever Really Fall At All?

Another argument is that Rome never really fell at all. The great contemporary historian Mary Beard even argued, “There is no such thing as the fall of the Roman Empire.” Rome’s split into east and west factions was in some sense a marker of its incredible success, demonstrating just how vast and unwieldy it had become. And after Constantine I shifted Rome’s centre to the great city of Constantinople and established the Byzantine Empire, it continued to thrive for almost a thousand years more. We might even say, instead of falling, Rome’s empire simply changed status. It wasn’t until 1453 that Constantinople was eventually seized by the Ottoman Empire, thus destroying the Byzantine Empire forever. This is, perhaps, the true end of the Roman Empire, even if it was many miles away from the actual city of Rome.

Who Was the Last Roman Emperor? It’s Complicated…